Alabaster is a historic mining complex along the shores of Lake Huron in Michigan. It consists of an open-pit gypsum mine and the remains of processing buildings, shops, offices, houses, and outbuildings. It also contains an abandoned railroad and the remains of an elevated marine tramway that spans 1½ miles into Saginaw Bay.

Alabaster, named after a fine-textured variety of gypsum 10 discovered off the shore of Lake Huron in 1837 by Douglas Houghton, 2 developed after prospectors began searching for sources of gypsum in the region and came across deposits 18- to 23-feet thick on-land. 7 The deposits came to the attention of George B. Smith, whose father, Benjamin F. Smith, owned a gypsum mill in Detroit. George Smith acquired land in remote Iosco County and opened a gypsum mine in 1862. 1 After George Smith died, the majority share of the land was acquired by Benjamin Smith.

By 1891, the gypsum mine was operated by Western Plaster Works. 3 A fire in that year destroyed the majority of the mining structures, but operations were soon rebuilt in time to supply material for the main buildings at the Chicago Columbian Exposition of 1893. 2 The buildings at the Exposition were clad with marble-like walls and earned the exposition the title “White City.” It greatly expanded gypsum sales.

The company name was changed to the Alabaster Company in 1898, 3 8 and the mine was incorporated into the U.S. Gypsum Corporation (USG) in 1901, 2 8 quickly becoming the largest gypsum mine in the state and one of the largest in the nation. 7 Housing for workers was constructed by USG circa 1910. 2

A 6,350-foot elevated marine tramway was constructed between the gypsum mine into the Saginaw Bay to serve awaiting freighters. 5 The tramway was built with 6,450 feet of 1¾-inch steel cable and 14,000 feet of ¾-inch cable and carried 72 two-ton buckets of gypsum. 10 The tramway was the longest over-water bucket tramway in the world. 5 The conveyor system represented a compromise between a major dredging operation to allow freighters to transport gypsum out of Alabaster and barging the material to freighters in deep water. 10 The ships took gypsum from Alabaster to East Chicago, Indiana or Detroit for manufacture into various gypsum products.

In later years, a secondary dock and load-out facility was constructed approximately 3½ miles north of the processing plant and tramway which was closer to newer open mine pits. It was connected to a dock that fed out into Lake Huron and to the railroad. The elevated marine tramway was dismantled circa 1999 after being disused for a number of years. 4 5

On June 30, 1904, the Erie & Michigan Railway & Navigation Company (E&M) was incorporated to provide 28 miles of railroad service and docks at Alabaster from the Detroit & Mackinac Railway (D&M) at Alabaster Junction and from the Michigan Central Railroad at Standish. 9 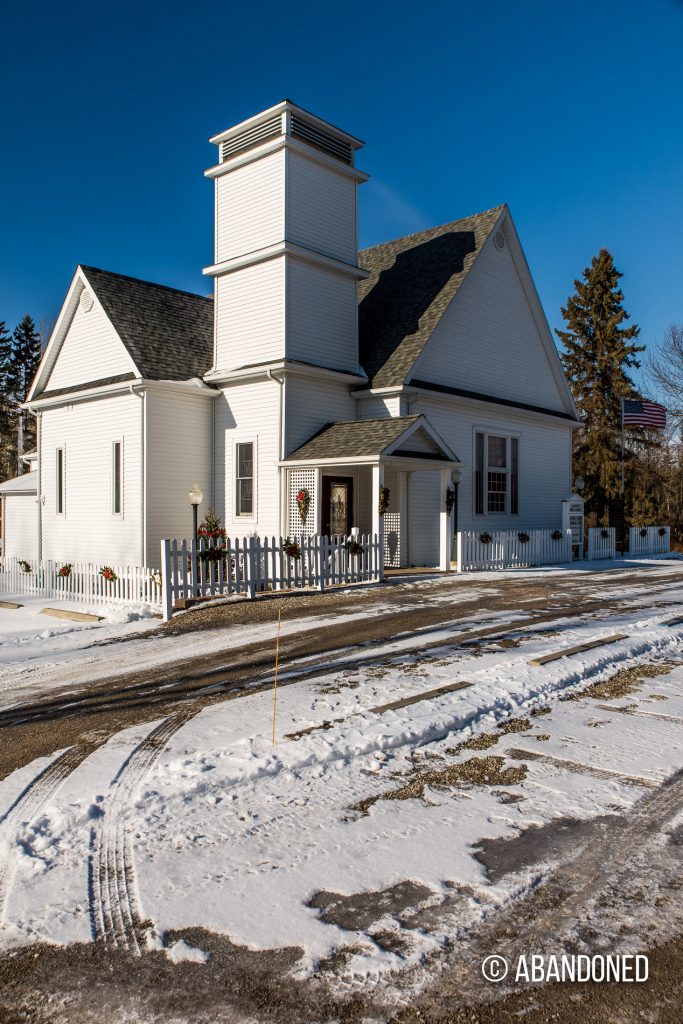 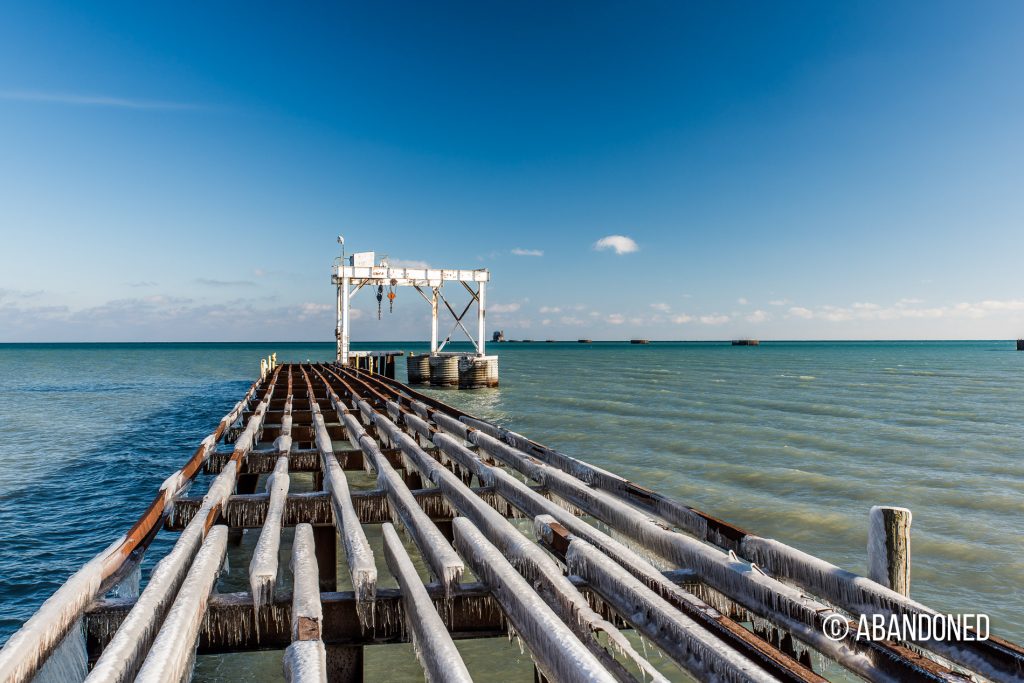 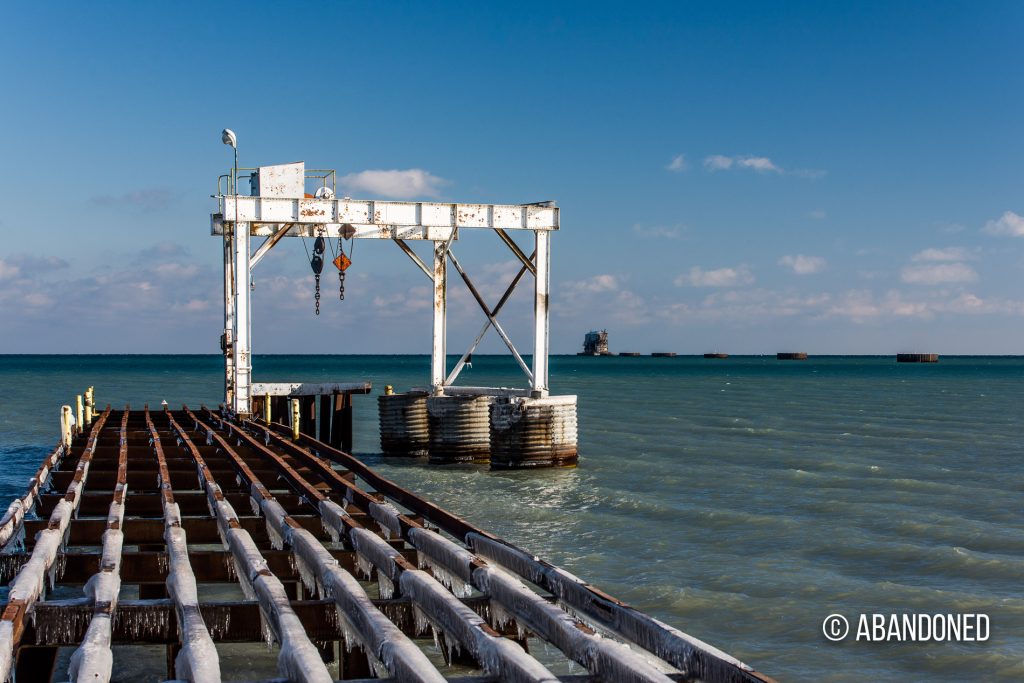 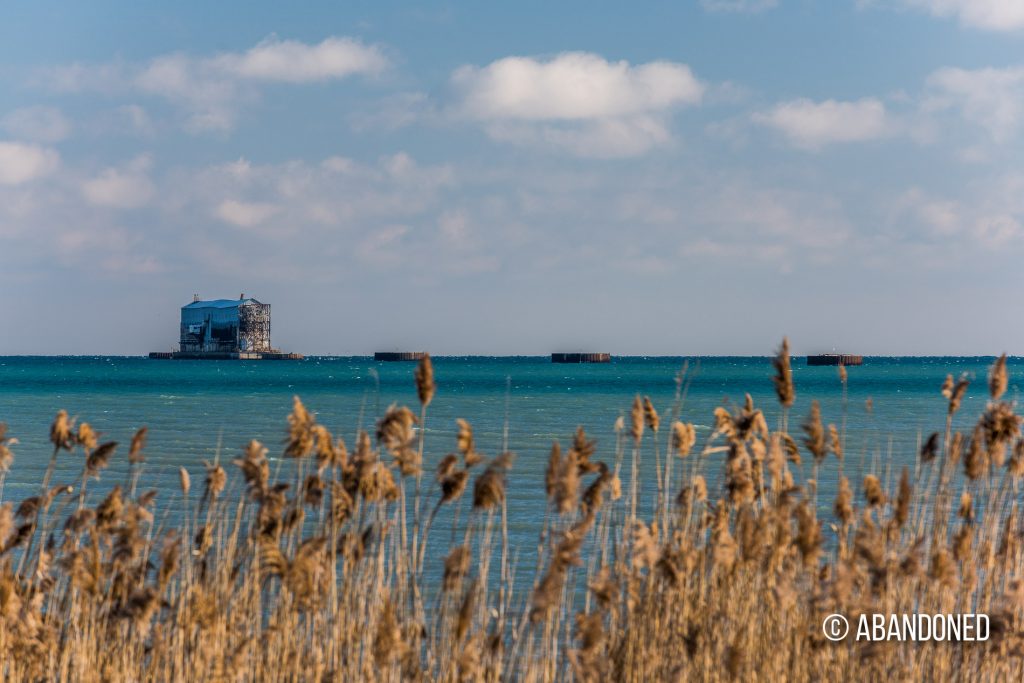