The former Ashland Oil and Refining Company Home Office was located at the corner of Winchester Avenue and 14th Street in downtown Ashland, Kentucky. After being abandoned for a number of years, it was demolished in 2022.

The history of Ashland Inc. began in 1910 when J. Fred Miles and two others founded the Swiss Drilling Company to explore and operate new wells in Oklahoma. 5 Following the breakup of Standard Oil’s monopoly in 1911 caused crude prices to crash in the Midwest. In 1916, Miles relocated Swiss to the new fields opening in eastern Kentucky, where, with the assistance of financiers in Cleveland, Ohio, and Chicago, he obtained control of nearly 200,000 acres of oil rights. Miles incorporated the Swiss Oil Company in 1918 in Lexington, Kentucky with a group of capitalists that included the Armours and Insulls of Chicago. It soon became one of the largest oil companies in the state. 4 5

A post-World War I economic depression and the exhaustion of early oil wells led Swiss Oil to consider expanding into oil refining. 5 Miles hired Paul G. Blazer to select, buy, and operate the most advantageously located and capable refinery in the area.

In January 1924, Swiss Oil acquired a small refinery in Catlettsburg and created the Ashland Refining Company subsidiary, 2 4 with Paul G. Blazer named general manager. 4 An extensive repair program was soon underway at the refinery which had a capacity of 1,000 barrels per day. 5

The 1940s were a hectic time for Ashland as it boomed with the advent of World War II which rapidly increased demand for petroleum-derived products and fuel. With government assistance, the company constructed a new facility at Catlettsburg to refine 100-octane aviation fuel. 5 Following the conclusion of the war in 1948, Ashland acquired the Allied Oil Company, a Cleveland-based fuel oil broker, which became a subsidiary. 4 5 It then snapped up the Aetna Oil Company of Louisville, the Frontier Oil Company of Buffalo, New York, and the Freedom-Valvoline Oil Company of Pennsylvania. By 1950, Ashland was the 19th largest oil company in the nation.

Ashland began to consider diversifying into new fields in the 1950s. In 1956, Ashland entered the petrochemical field with the acquisition of the R.J. Brown Company of St. Louis, Missouri. 5 For Ashland, it was an ideal match as a great number of chemicals could be derived from petroleum. It then purchased the Union Carbon Corporation, one of the nation’s largest manufacturers of carbon black, in 1962, 4 5 and the Archer Daniels Midland Chemicals Company in 1966. To oversee these interests, Ashland formed the Ashland Chemical Company subsidiary.

Ashland entered the coal business with Ashland Coal in 1969 and quickly became one of the top ten coal producers in the United States. 5 It took advantage of the refineries’ asphalt byproducts to become one of the nation’s largest road-building firms, a time when the Interstate Highway System was rapidly being developed across the nation.

For the city of Ashland, the growth of Ashland Oil and Refining led to changes in downtown. In the late 1920s, it acquired a six-story building at 1403 Winchester Avenue which had been erected in 1925 for the Josselon brother’s furniture store. 6 To help recoup its investment, Ashland rented the bottom floors to Ashland Dry Goods.

Ashland also obtained an option on St. Paul’s Lutheran Church that was to the east of the Josselon building so that it could later construct another office building. 6 The Lutherans were building a new sanctuary on Bath Avenue with a commitment to move from Winchester Avenue by a specific deadline. The move was delayed by the Korean War, with the government restricting the sale of construction materials to sites already owned.

St. Paul’s would not change their deadline to vacate their lot, and Ashland could not close the deal until after the war had ended. 6 To remedy the issue, Ashland acquired the property to the immediate west of the Josselon building at the corner of Winchester Avenue and 14th Street and eventually built a seven-story building on that site.

Although Ashland Oil and Refining was a sprawling enterprise, it had centralized many of its functions at its home office in downtown Ashland but this began to change in the late 1960s when it began moving its chemical, coal, and Valvolvine divisions out of Ashland. 2 The city was considered at a disadvantage as it lacked the amenities of larger metropolitan areas as it had no modern hotels, lacked first-rate restaurants, was barred from serving alcohol, had little in the way of modern housing or condominiums, 3 and had long-standing financial issues with its school system. 8 9 It was also hours away from a major airport with sufficient connections. 9 The company also frequently complained about dealing with the plethora of local governments in the Ashland area which made broad and coordinated planning very difficult.

In 1970, Ashland Oil and Refining Company became more simply Ashland Oil, Inc. to reflect its primary focus on petroleum. 10 In the following year, it opened the first building of its new headquarters complex in the adjoining city of Russell. 6 The second building was completed in 1979. 2 9 10 It then relocated its Valvoline division and computer processing facility, 9 the latter once destined to move to Russell, 2 to Lexington in 1982. 9 Ashland Oil completed vacated its original Home Office building in 1985 6 and became Ashland Inc. in 1995. The company moved to Covington in 1998.

The former Ashland Home Office in downtown Ashland was later owned by the Kentucky Appalachian Foundation, a non-profit entity founded to develop the property. 6 At some point, Morehead State University expressed interest in renovating the buildings for use as its Ashland campus and later moved into the second and third floors of the building. The buildings were also home to Ashland Community & Technical College’s Entrepreneur Center, Big Brothers/Big Sisters of the Tri-State, Elite Catering, Stonebridge Insurance Services, Tri-State and Ashland Engineer Associates, and WLGC-FM radio.

By 2007, the Kentucky Appalachian Foundation was having trouble meeting basic obligations for the former Ashland Home Office complex, and tenants were told that they would need to relocate. 6 A shutdown of the building was adverted but the building was eventually listed for public auction in January 2011. It was sold for $130,000 to a local individual who had expressed interest in redeveloping the building for other uses.

Demolition of the former Ashland Oil and Refining Company Home Office began on March 21, 2022, with crews arriving on site to begin asbestos abatement. 1

After demolition is completed, a new convention center and parking garage will be constructed in its place. 1 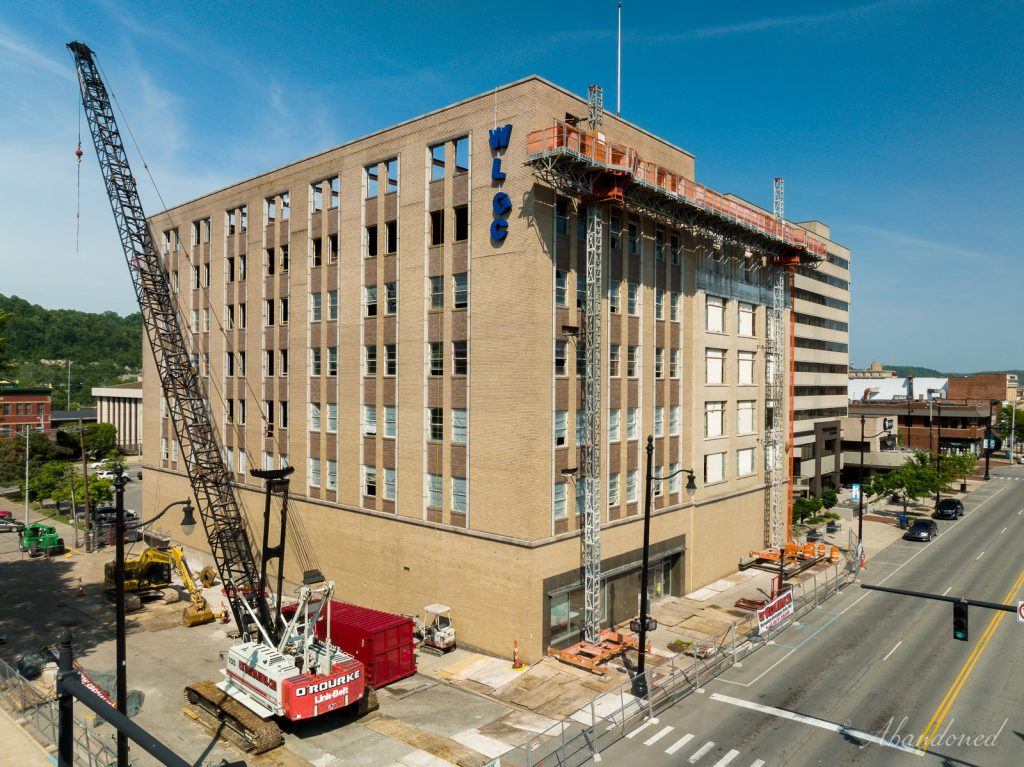 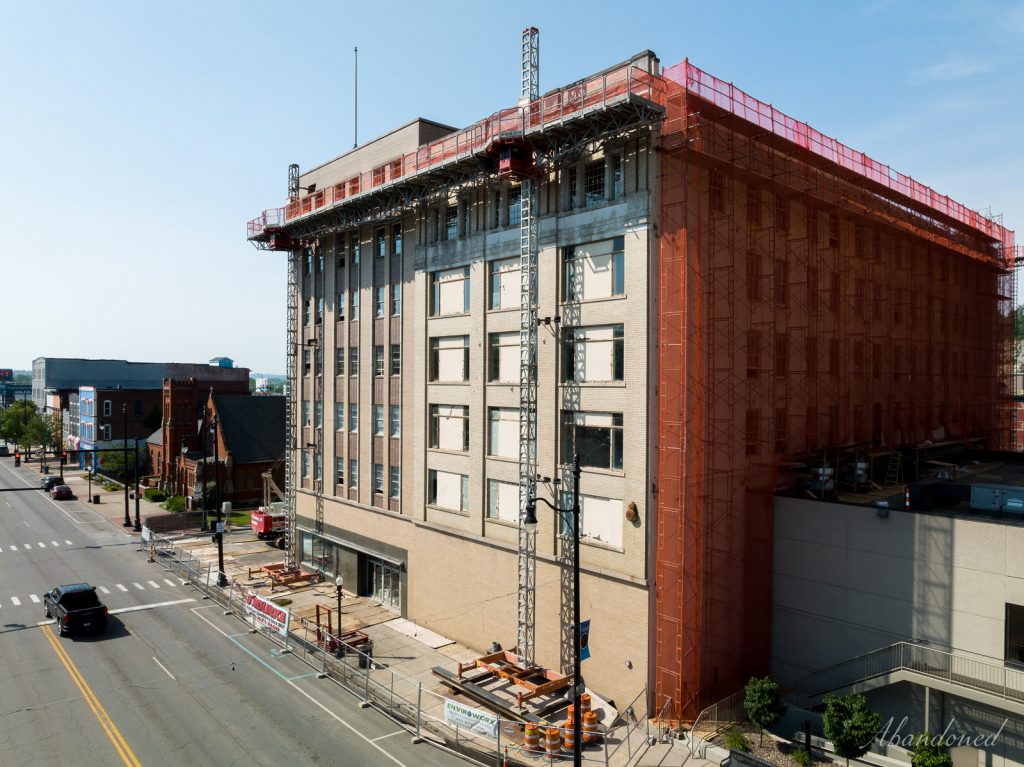 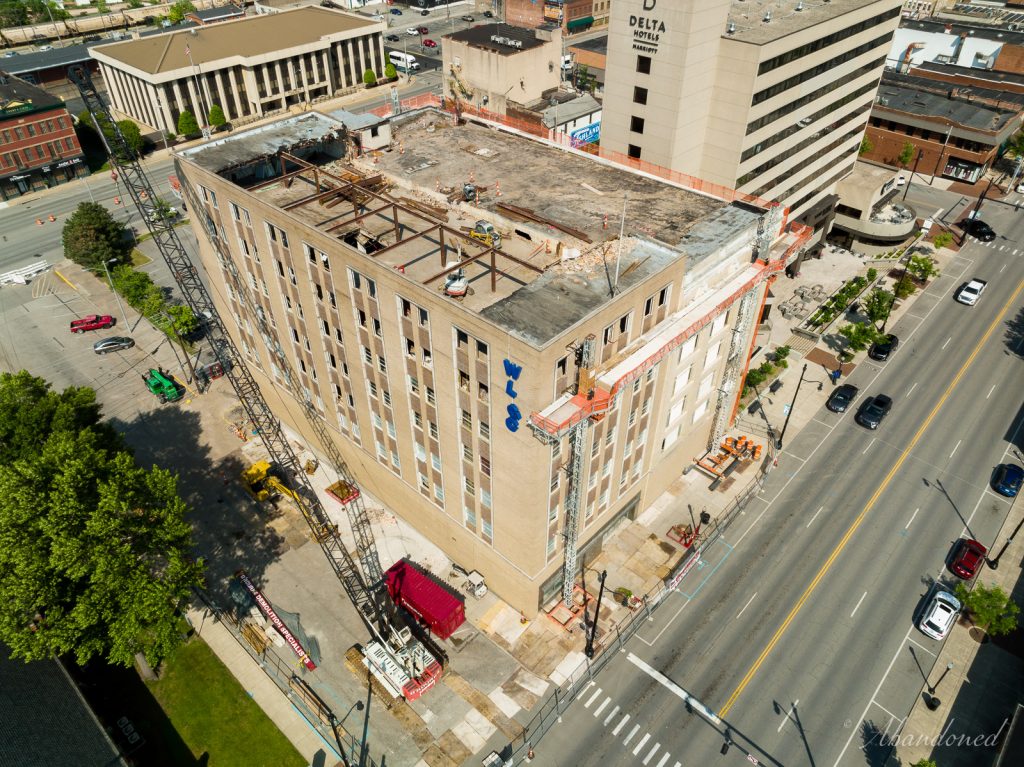 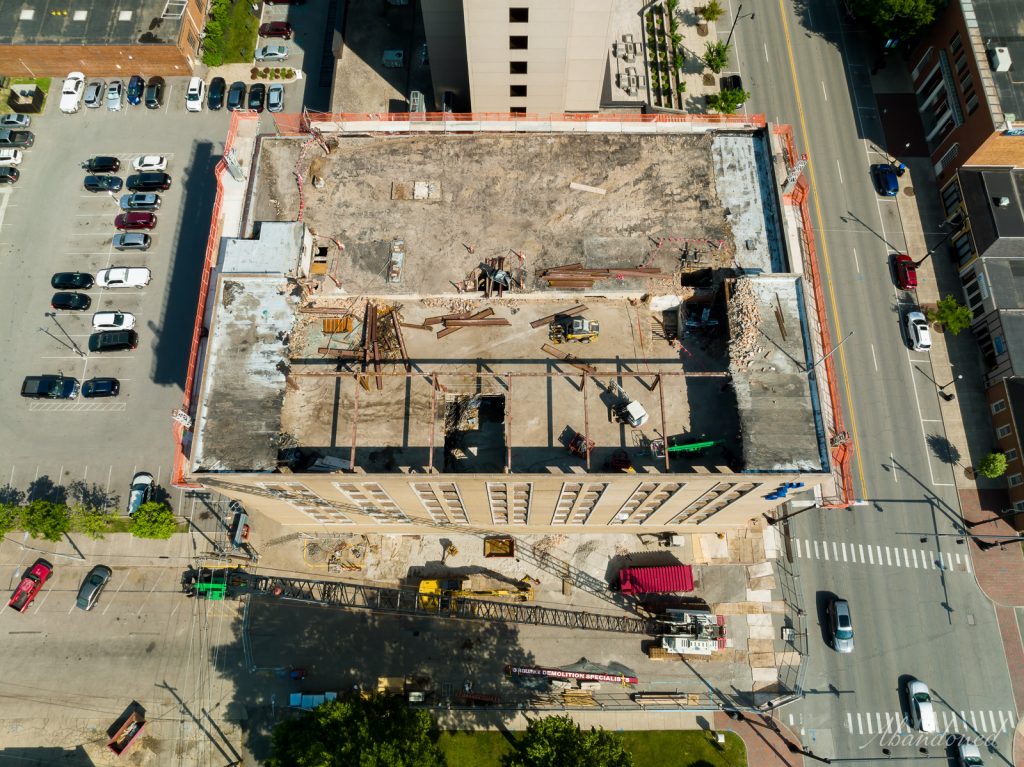 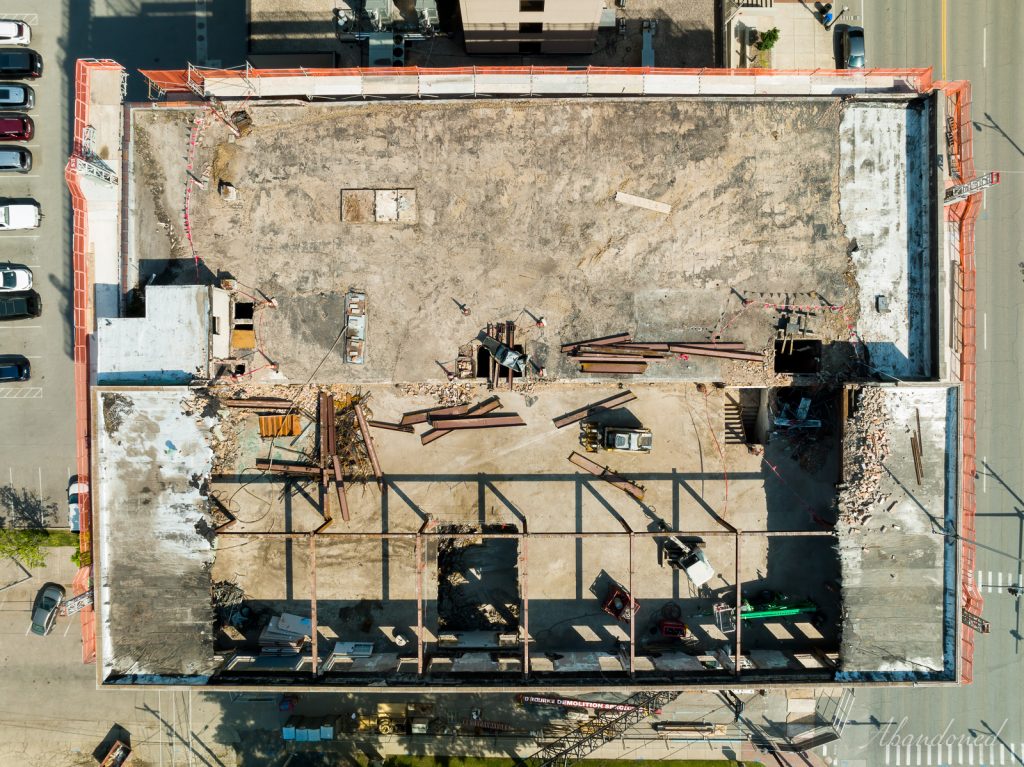 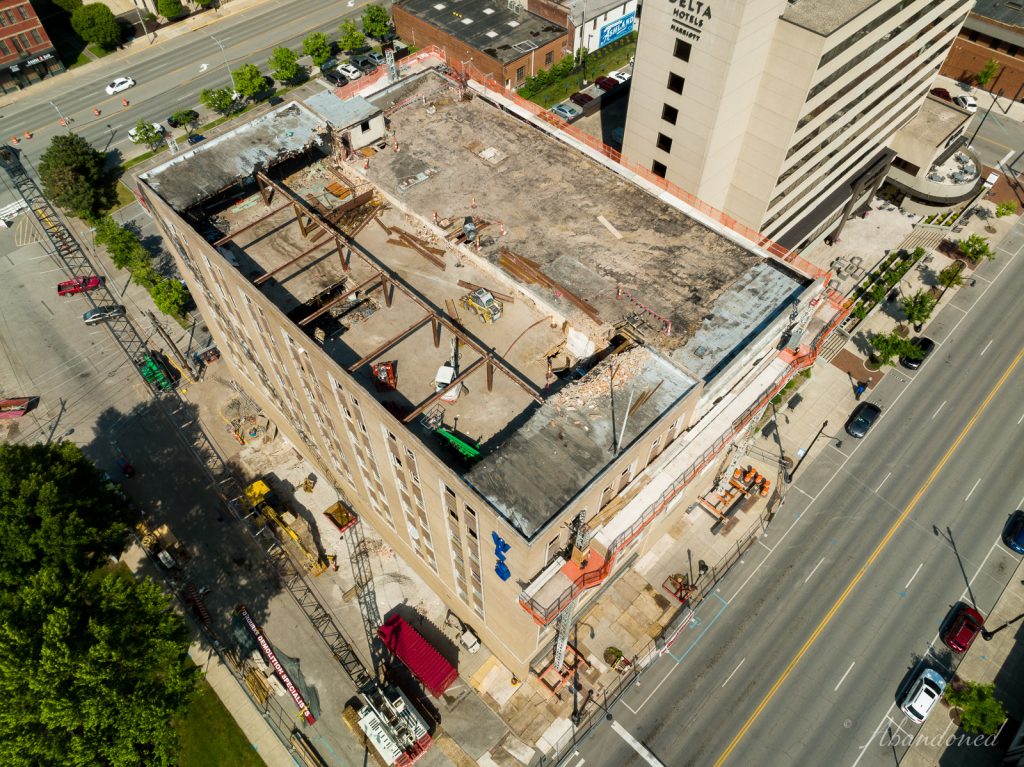 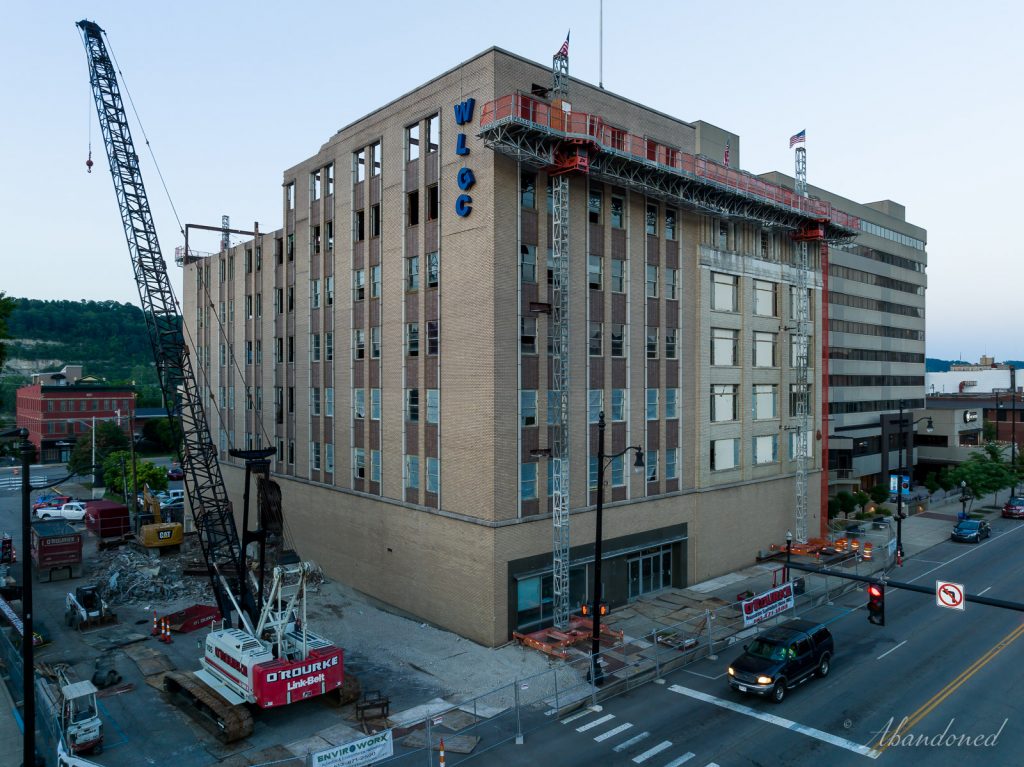 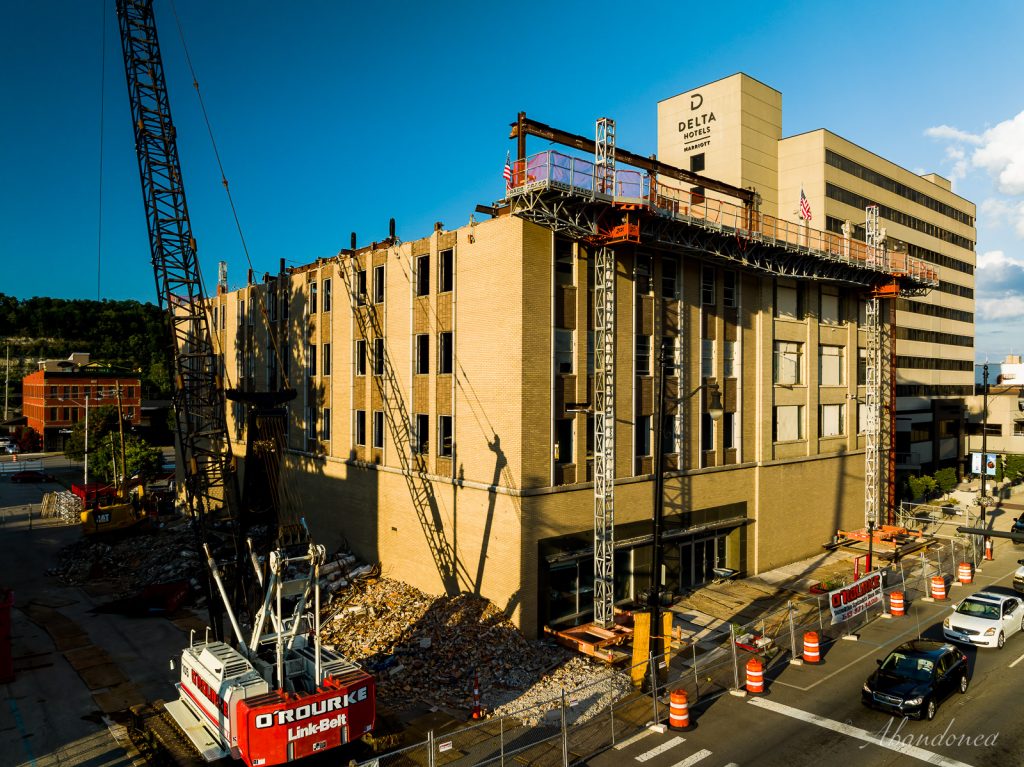 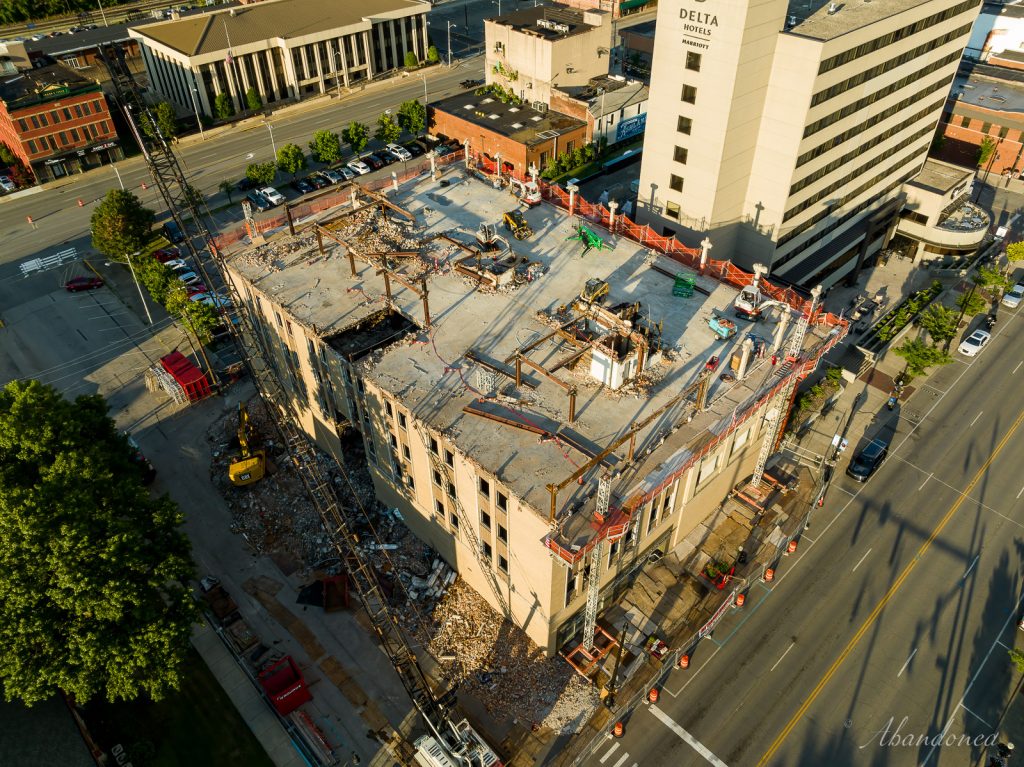 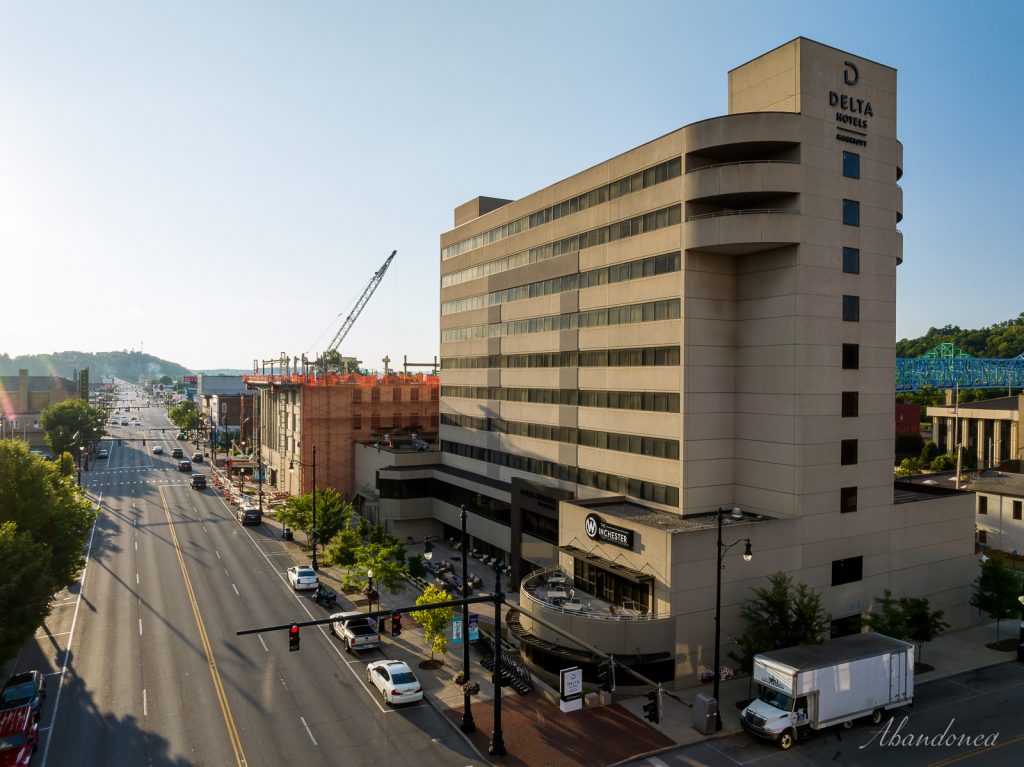