Blue Sulphur Springs is a all but demolished and forgotten springs resort in Greenbrier County, West Virginia.

Situated in a wide valley formed by the junction of Kitchen Creek and Sawmill Hollow valleys and within a geographic area of sulphuretted and thermal mineral springs, Blue Sulphur Springs in western Virginia was named for its iridescent color of the sulfur spring. 2 Much like other mineral spring resorts, it was believed that the 53° sulfur water from the spring could be a remedy for many diseases, including those of the liver and skin, for kidney infections, bladder and prostate issues, cholera, diarrhea, diphtheria, dysentery, and typhoid fever. 2 3

In 1834, the Blue Sulphur Springs Company was chartered by the General Assembly of Virginia, with George Washington Buster being the sole owner of the company. 1 2 Buster constructed the Blue Springs Resort that consisted of a three-story building with 200 guest rooms, a distinctive Greek Revival-style springs pavilion, a bathhouse, 20 frame cottages, servants’ quarters, and stables. 2 It also included Tartarean ovens, a special bathhouse where hot mineral water and vapor baths were administered, and a room where the nation’s first curative mud baths were installed. 1 3 It was overseen under the watchful eye of Dr. Alexis Martin, the resident physician 1 2 3 who was a former surgeon in Napoleon Bonaparte’s Imperial Army. 3

During its heyday of the 1840s, the resort was the recipient of prominent guests, including Jerome Bonaparte, Henry Clay, Andrew Jackson, Robert E. Lee, and Martin Van Buren. 1 2 5 Many guests came up from the deep South who journeyed to the site by riverboat on the Mississippi, Ohio, and Kanawha Rivers, and stagecoach over the Midland Trail, where they would spend their summers in the cooler mountain climates of the county. 3 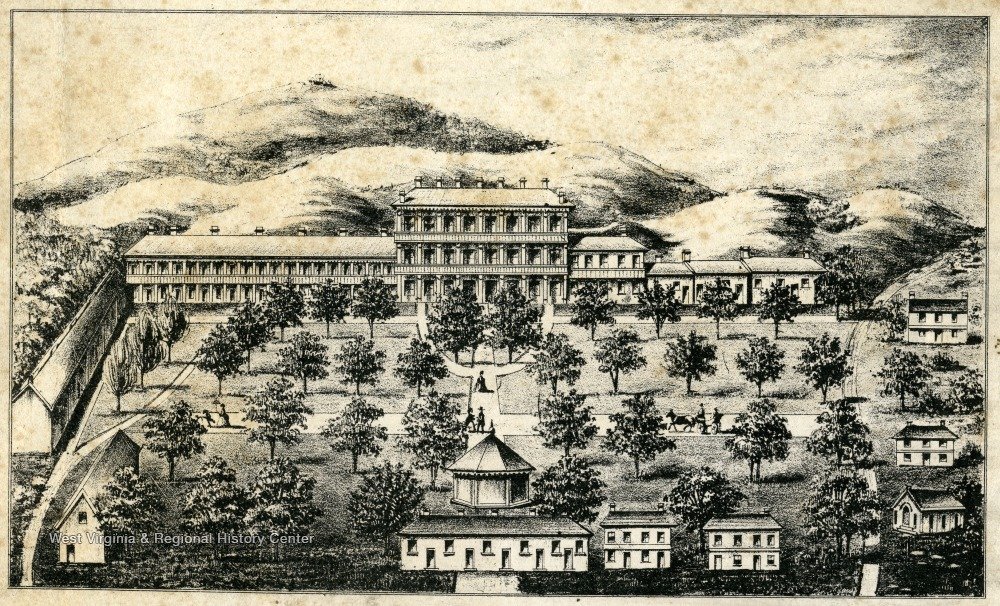 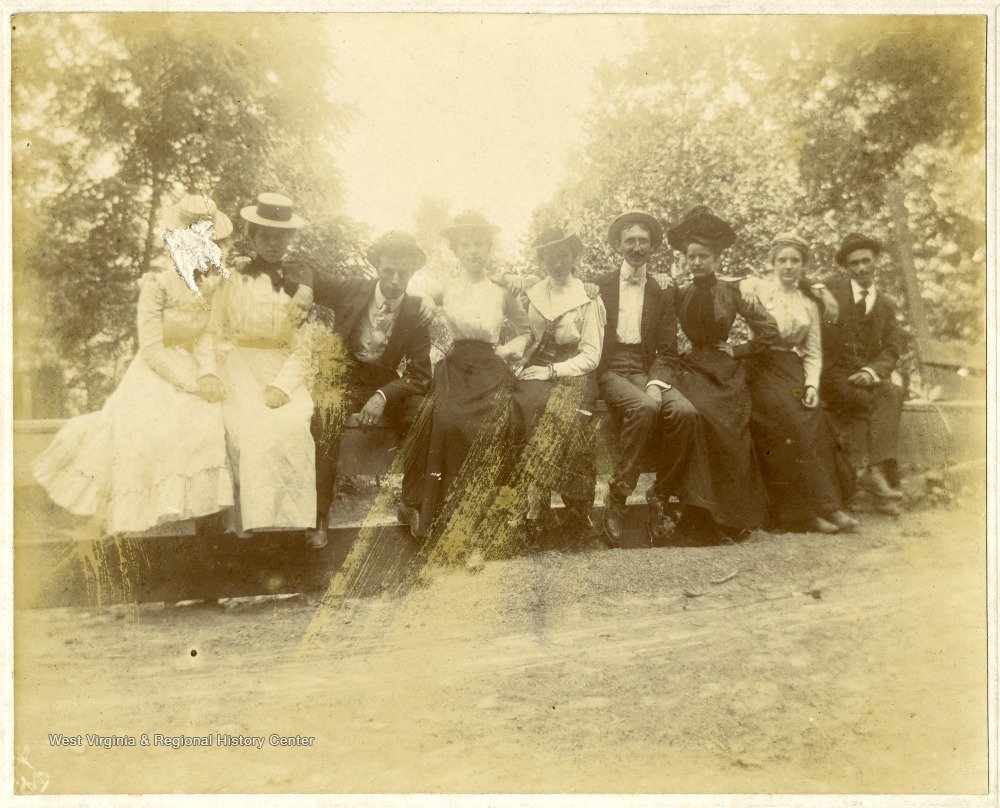 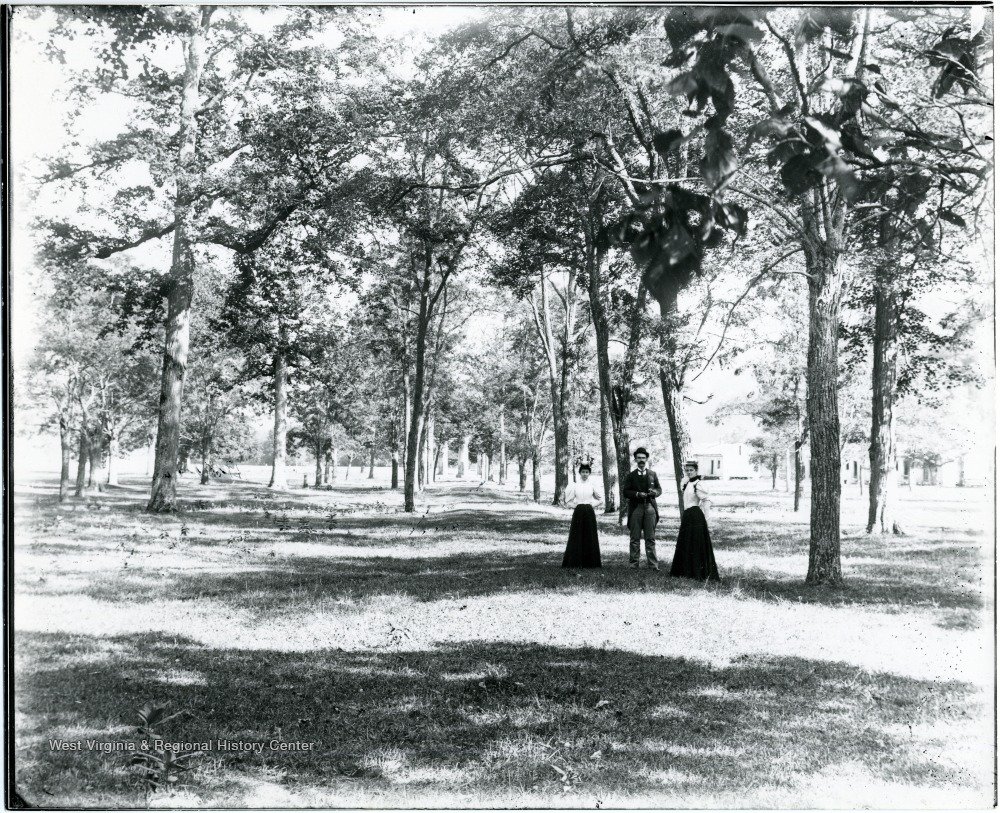 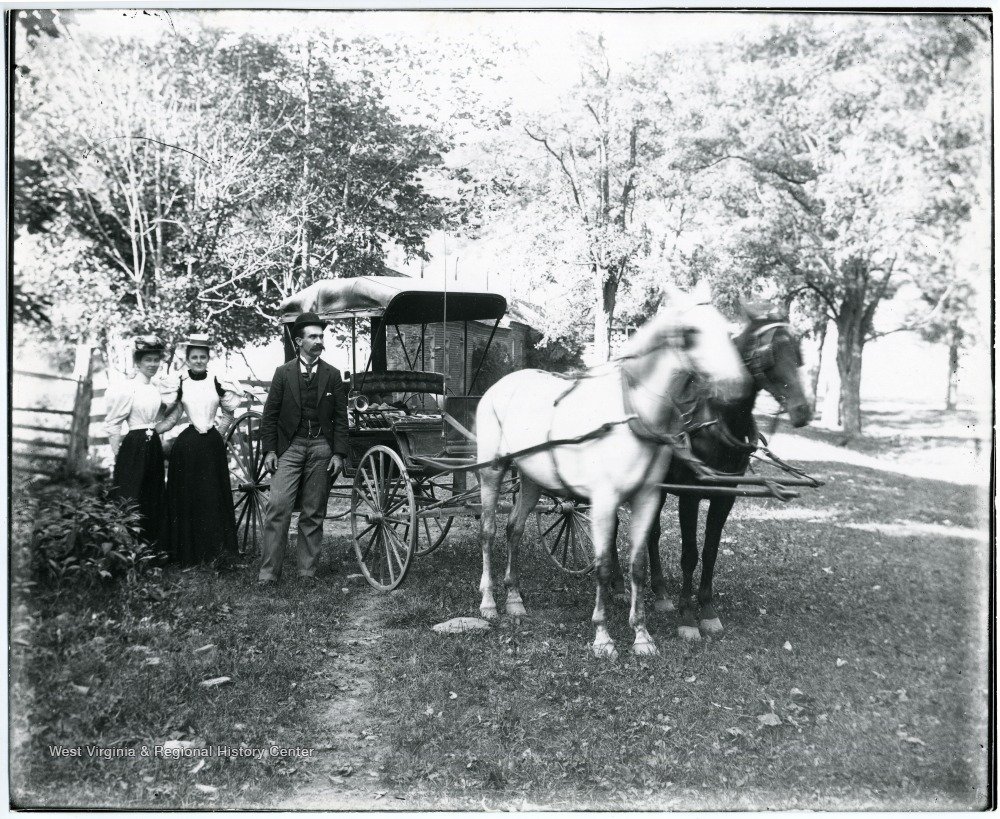 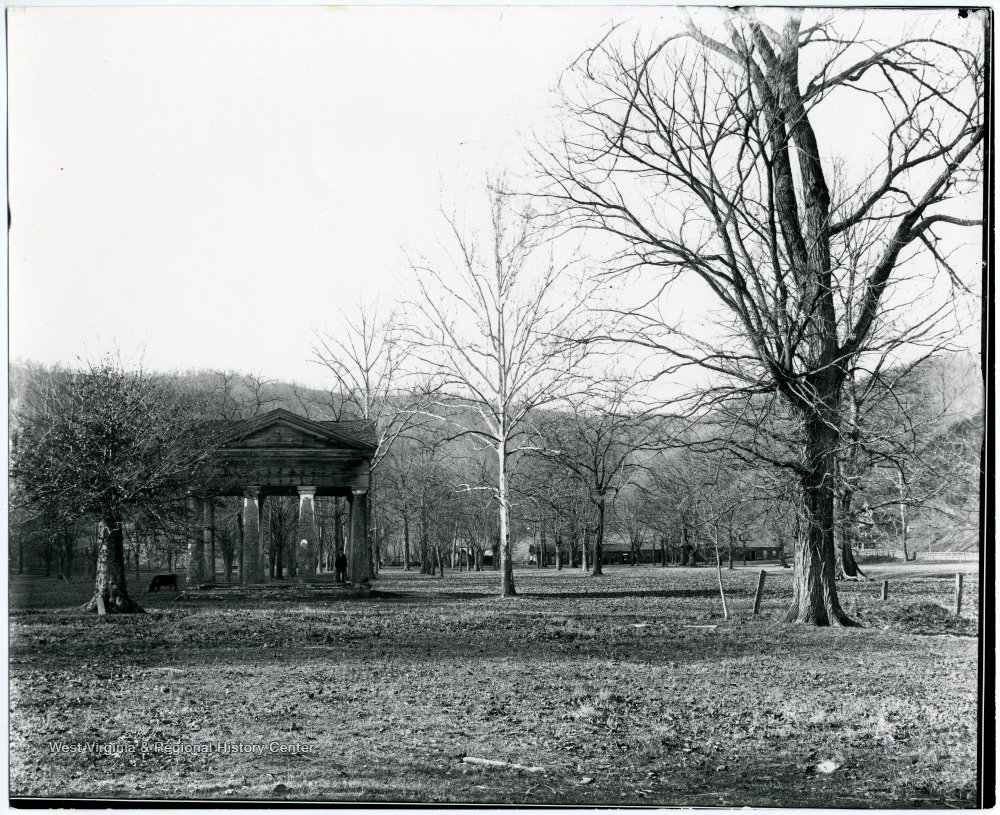 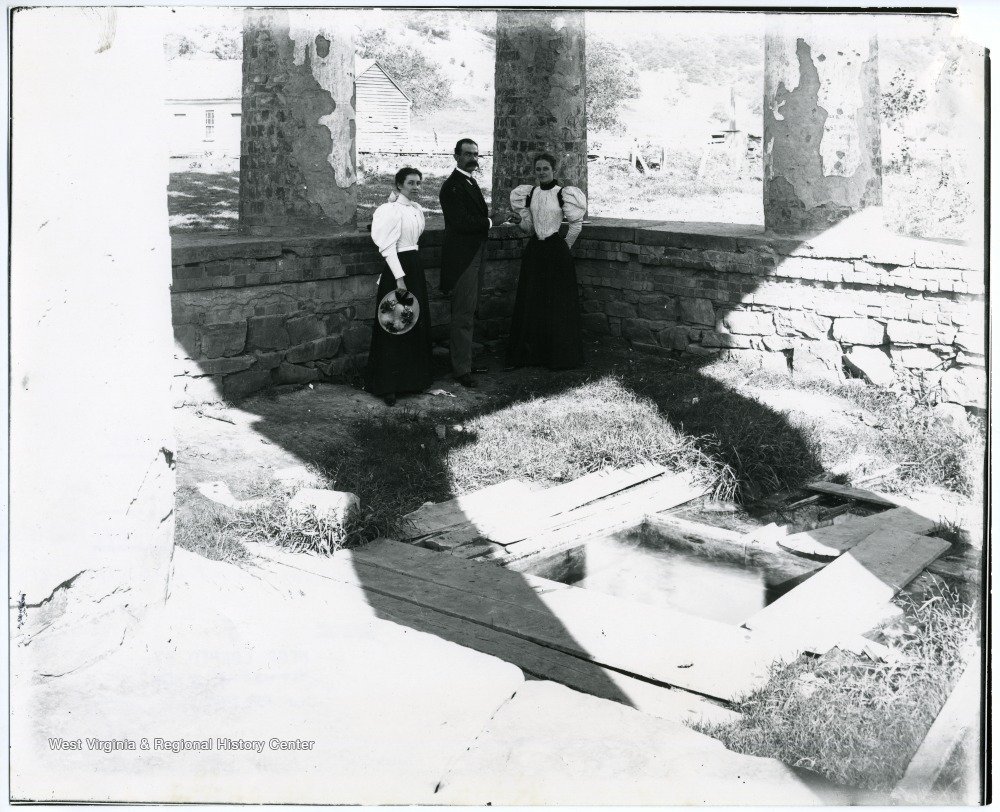 Competition from other resorts in the region, including The Greenbrier, caused Blue Springs Resort to close in 1859. 1 2

The complex was sold to the Baptists of Virginia who wanted to establish a school to educate ministers, which opened as the Allegheny High School on October 1, 1859. 2 It was later renamed Allegheny College. In September 1860, a fire destroyed the main hotel which had been used as a dormitory. Part of the residence hall was rebuilt later in the year but the college was forced to close before the end of 1861 because of the Civil War.

During the years-long conflict, the county saw engagements between Union and Confederate forces. 2 The former college and springs resort was used alternatively by both armies as a temporary camp and hospital. In 1863, a Confederate regiment from Georgia staying at the resort over the winter lost nearly 100 men to exposure and disease. 3 Many were buried on a hillside overlooking the resort, many occupying coffins that were hastily built from furnishings from the resort’s cottages. In 1864, Union troops burned all of the buildings at the resort, with the exception of the pavilion, to prevent the Confederates from using them as an outpost. 1 2

The property surrounding the spring remained abandoned until 1878 when George Washington Buster’s heir regained title to it. 2 The Buster family owned the property until early 1964 when it was conveyed to Lewis Fleshman and then to Rebecca Lineberry that June.

The lone pavilion was listed on the National Register of Historic Places in 1992 and added to the Preservation Alliance of West Virginia’s Endangered Properties List in 2013. 1 3 That April, Lineberry donated the two-acre tract encompassing the structure to the Greenbrier Historical Society and the Friends of Blue began initial stabilization work in 2014. 3 5

Temporary wood cribbing was installed to stabilize the foundation, and wires were used to support leaning columns. 4 Additional repairs in 2015 included repointing the solid brick columns and sealing them in a fabric wrap, and installing cement blocks, and thick wood braces to stabilize the structure. 3

In August 2020, a crew from Buckeye Construction & Restoration of Waterford, Ohio began preliminary restoration work on the pavilion. 3 As of September, they had excavated and installed a drainage and sump system around the perimeter of the structure and dug down along the inner perimeter to examine the structure’s limestone foundation, which was determined to be in great condition. 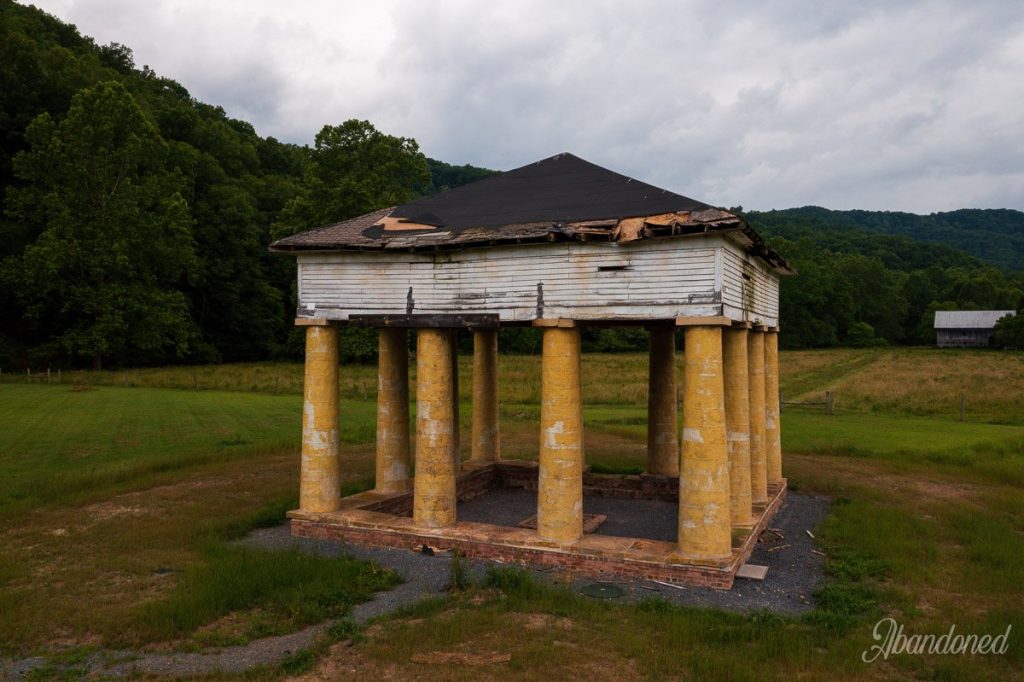 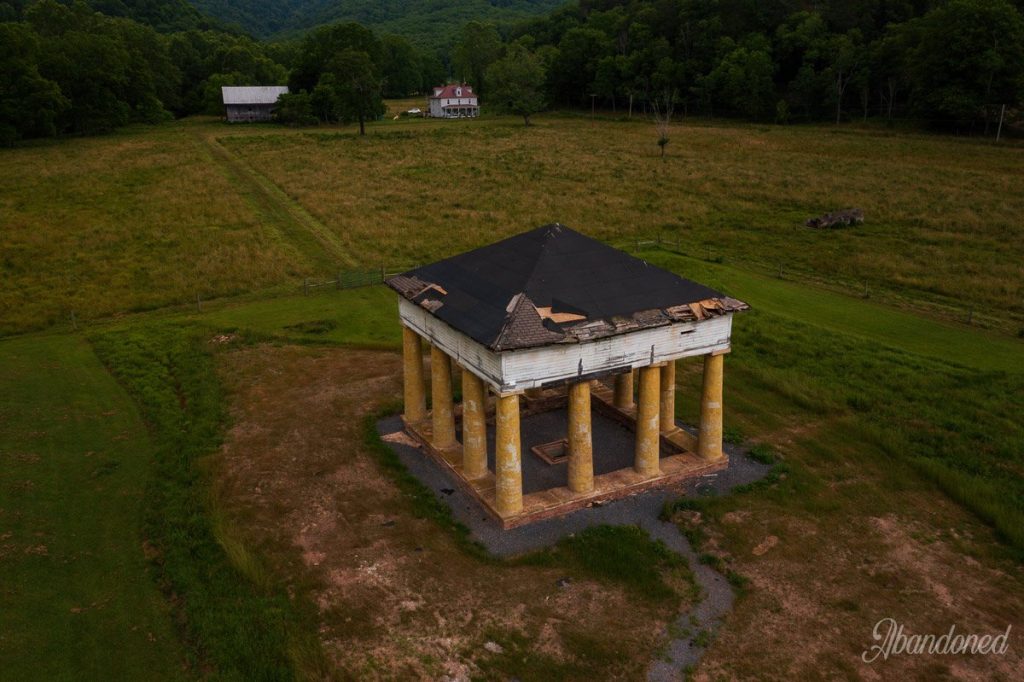 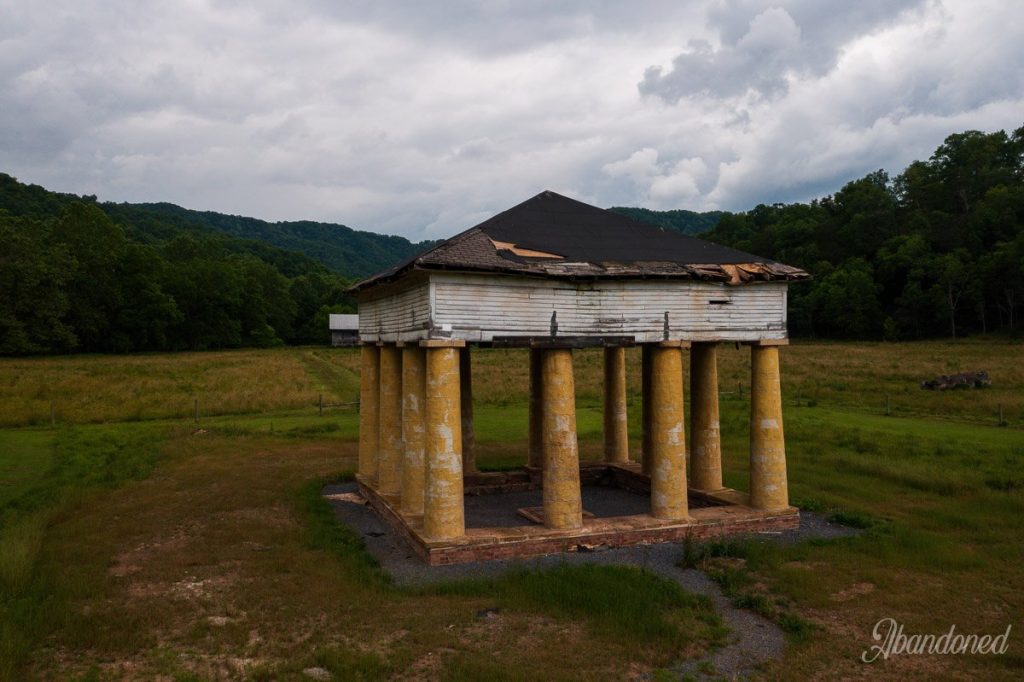 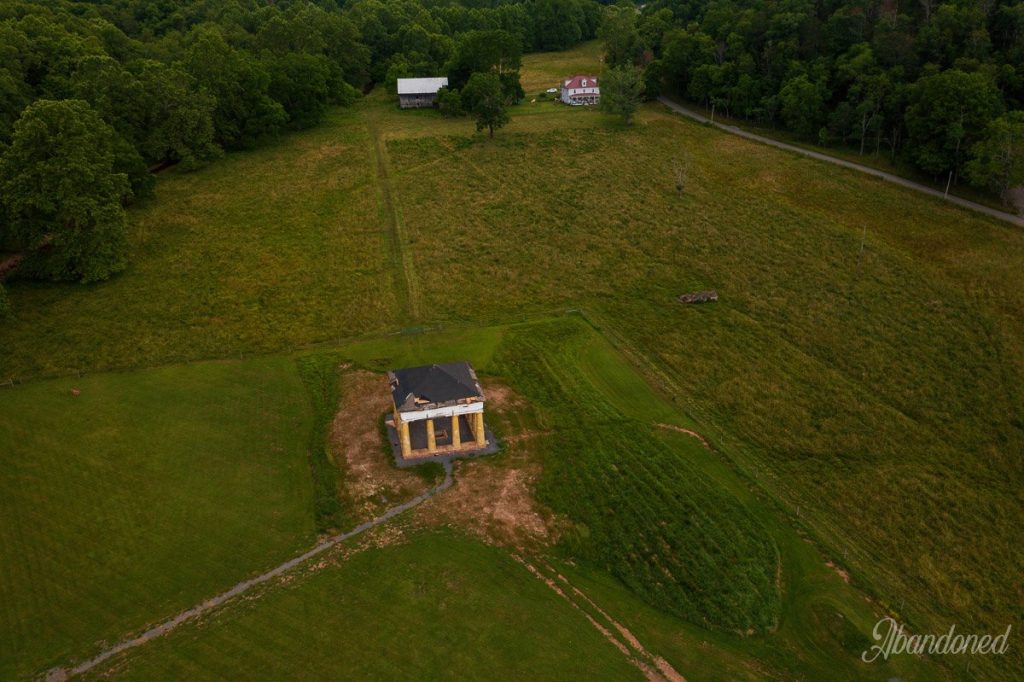 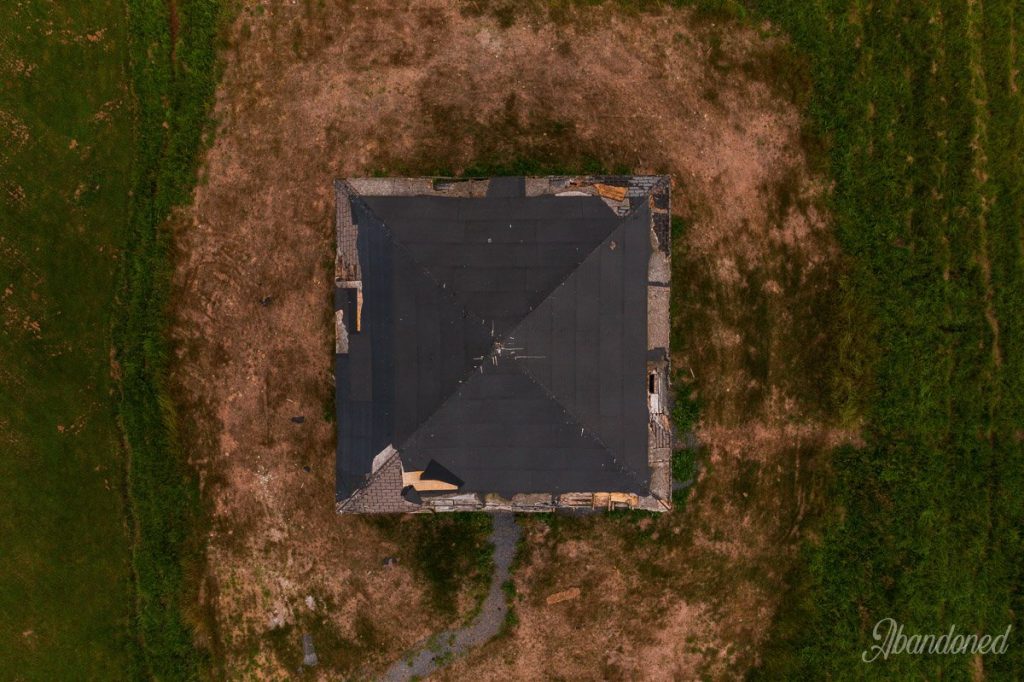