The Delaware Station of the Philadelphia Electric Company is a closed 468 MW coal-fired power plant along the Delaware River in Philadelphia, Pennsylvania.

The earliest electric supply companies that emerged in the late 1800s supplied power for a particular product or building. At the outset in Philadelphia was the Brush Electric Light Company in 1881 to install and provide power for new electric street lamps along Chestnut Street. 1 Another, the Edison Electric Light Company, replaced gas lighting in homes and businesses with Edison’s patented incandescent bulbs. Before long, dozens of such utilities had emerged to generate electricity for a wide variety of uses.

The Philadelphia Electric Company (PEC) was founded in 1881 9 and incorporated in 1902 in part to consolidate the growing number of electric companies, create a standardized electrical grid, and switch from direct current to alternating current to boost the transmission range. 1 It desired the erection of a large centralized plant that could provide all of the electricity that the city needed at a lower cost than the many smaller, less efficient plants. The PEC acquired a tract of land on Christian Street at the Schuylkill River around the turn of the century and began construction on Schuylkill Power Station in 1902, the largest coal-fueled power plant in the world at 81 MW. But an electrification project along the Pennsylvania Railroad and rapid growth in industrial customers enabled the construction of an addition to Schuylkill to bump up its capacity to 130 MW.

Chemical, shipbuilding, and steel factories began to emerge along the Delaware River south of Philadelphia in the 1910s. 1 After electricity shortages were reported, planning efforts began on PEC Chester Waterside Station, a new 120 MW power plant at the cost of $5.5 million, which was put into full operation in 1919.

In 1913, 1 Joseph B. McCall, board chairman of PEC, purchased 8½ acres of the former Neafie & Levy Shipyard in Kensington for the site of a future power plant as it had over 400 feet of frontage along the Delaware River, close to PEC’s primary coal yard on Petty’s Island, and was close to numerous industrial sites. 6 9 (The shipyard was where, in November 1861, the Union government placed an order for the construction of an iron submarine. 5 Christened the Alligator, it was the first submarine of the Civil War, rushed into service with the purpose of destroying the Confederate ironclad, Merrimack.)

But after the United States entered into the Great War in 1917, the city of Philadelphia blossomed under strong industrial growth, particularly in the shipbuilding, locomotive production, ammunition, and textile industries, threatening to overwhelm the PEC and cause systemwide power shortages. 1 It was decided to construct the Delaware Power Station in Kensington on its previously acquired site.

John T. Windrim, who had also designed the Schuylkill and Chester power plants, was hired to design the new facility. 1 9 Architecturally, Windrim sought to use the Beaux-Arts style to create a monument to electricity and impart a sense of stability and permanence. Windrim was paired with William C.L. Eglin, who had introduced revolutionary engineering technologies in power plants. 9 Stone & Webster, a national engineering and construction firm, was hired as the general contractor.

Initially, the complex was to be erected with steel, but a shortage of materials because of wartime manufacturing led to the use of reinforced concrete, a far heavier material. 1 It required anchoring the power plant down to bedrock at a much higher cost.

Although construction for the foundations of the new Delaware Power Station began on September 25, 1917, work stopped due to a lack of funds in December. 1 9 The PEC was struggling to find the money to complete the Chester Power Station and pay off a $2.5 million loan to the Drexel & Company. Additionally, the cost of Delaware, at $24.5 million, was far above any other power plant at the time. Finding investors during wartime was challenging, and the federal government declined to provide any financial assistance to the PEC for the station’s construction even though the plant’s ill-completion could result in power shortages to shipyards and other industries vital to the war effort.

Despite a drop in electricity use from some industrial sites after the Great War concluded in November 1918, the “domestic revolution” swiftly overtook demand thanks in part to PEC’s “Wire Your House” campaign. 1 By the end of the year, the PEC had 103,015 customers, a nearly fivefold increase from 1907.

Finding investors was an easier sell in peacetime, and through the sale of stocks and bonds, the PEC was able to raise large sums of financing to fund half of the new Delaware Power Station. Construction resumed on the plant on September 28, 1919, 9 and the first 30 MW turbine of the six planned was put in operation on October 30, 1920. 8 9 The second 30 MW unit came online by the end of the year. 1 6 Even so, Delaware, at one-third of its planned capacity, was able to provide 25% of Philadelphia’s total peak load of 240 MW for 1921. 1 A third 30 MW turbine came online in January 1922 as peak demand had approached supply.

Work to construct the second half of Delaware began in December after a successful sale of stocks and bonds. 1 The fourth and fifth 30 MW turbines were installed in 1923, followed by the final 33 MW turbine in 1924. All six turbines, producing 183 MW, 9 burned 325 tons of coal per hour. 5

Shortly after the Delaware Power Station came online, the PEC planned for an even larger power plant to keep up with demand. The proposed Richmond Power Station would feature 12 turbines and a total capacity of 600 MW, but by the end of 1925, when the first of the three planned turbine halls had been completed, and two of the twelve 50 MW generators installed, electricity demand had begun to level off. 1 Although two additional turbines were installed at Richmond in 1935 and 1952, the full plan was never realized and Delaware remained the largest in both footprint and generating capacity for the PEC.

Between 1926 and 1930, the PEC merged with the Pennsylvania Power & Light Company and New Jersey’s Public Service Electric & Gas Company to form the largest power grid in the nation. 9

Electricity usage began to surge again with a post-World War II housing boom taking shape around Philadelphia, and new capacity was required. The PEC acquired the former William Cramp & Sons Shipyard 1 just north of the Delaware Power Station, hired David Marano as the architect for a contemporary expansion of the power plant, 9 and spent $41 million to construct two 136 MW generators in a separate turbine hall. 1 The new units more than doubled Delaware’s capacity when they began operating in 1953; as several of the original turbines had been replaced, the Delaware Power Station was capable of handling nearly 468 MW.

The new addition debuted new television camera equipment that monitored water-level gauges of the boilers and transmitted the picture to a control room. 7 Specially designed cameras also peered into the furnaces to watch the boilers’ 16 firing points.

The boilers, designed to run on both coal and fuel oil, were converted to run on fuel oil only in 1972. 9

In the 1950s, three generators in Boiler House No. 2 were converted to run on more efficient fuel oil rather than coal. 1 In 1969, all six of the original turbines were put into standby status, operated only as needed for periods of increased demand and load balancing, and in 1972, the circa 1953 units were converted to run on fuel oil. 9 Eventually, the original turbines were retired in 1984. 5 After PEC was acquired by Exelon in 2000, 9 the remaining two 47-year-old turbine units were placed into standby status until 2004 when they were retired. 9

The circa 1953 addition, along with the oil tanks, were abated and demolished beginning in August 2009. 5 Exelon then tapped Binswanger real estate brokerage to sell the Delaware Power Station, excluding a one-acre gas turbine plant, in the fall of 2014. 4

Boiler House No. 1 and No. 2, separated by a five-story central coal storage area, were built of reinforced concrete with “THE PHILADELPHIA ELECTRIC COMPANY” and “DELAWARE STATION” inscribed in teal-colored ceramic tiles on the exterior. 1 The roof contains eight cylindrical metal steam stacks. To the west of the Boiler Houses was the Turbine Hall, the main operating space where turbines, powered by steam created in the boiler houses, generated electricity. 1 The Turbine Hall was lit with six gabled skylights. The Switch House, fronting North Beach Street, contained electrical substation equipment for the Philadelphia Electric Company.

To the rear of the power plant was Pier 61, which measured 75-feet wide and extended for about 250-feet into the Delaware River. 1 Located near the east end of Pier 61 was the Coal Tower, a five-story reinforced concrete building used to lift coal delivered from barges on the river. An Ash Tank was located along the bulkhead just east of Boiler House No. 1, adjacent to the Screen House and Pump Room.

Coal, which arrived on barges from Petty’s Island, would be lifted by boom hoists and dropped into the coal tower, where it was broken down and crushed for the original turbines. 1 After processing, the coal would be transported on a conveyor to a tower above the storage area between the two boiler houses. Cross conveyors, which extended from both sides of the tower, delivered the coal to the boiler houses into four bunkers, each of which contained three compartments supplying two boilers each. Once fed, the boilers would heat feed water to generate steam, which would then be piped under pressure to the turbines. The turbines would spin the adjacent generators to create electricity, which would then be distributed out through the switch house.

The process was similar for the circa 1953 units, except that the coal was pulverized finer than talcum powder before being blown into the furnace, requiring only less than a tenth of the amount of coal required from older operations to produce a kilowatt-hour. 7

Simultaneously, cooling water would be continuously piped in from the river and filtered through the pump house and screen room, then supplied to the condenser units below each turbine. 1 Within the condensers, the steam would be cooled into condensate, which would then be recycled and used again as feed water. The excess would be released back into the river. 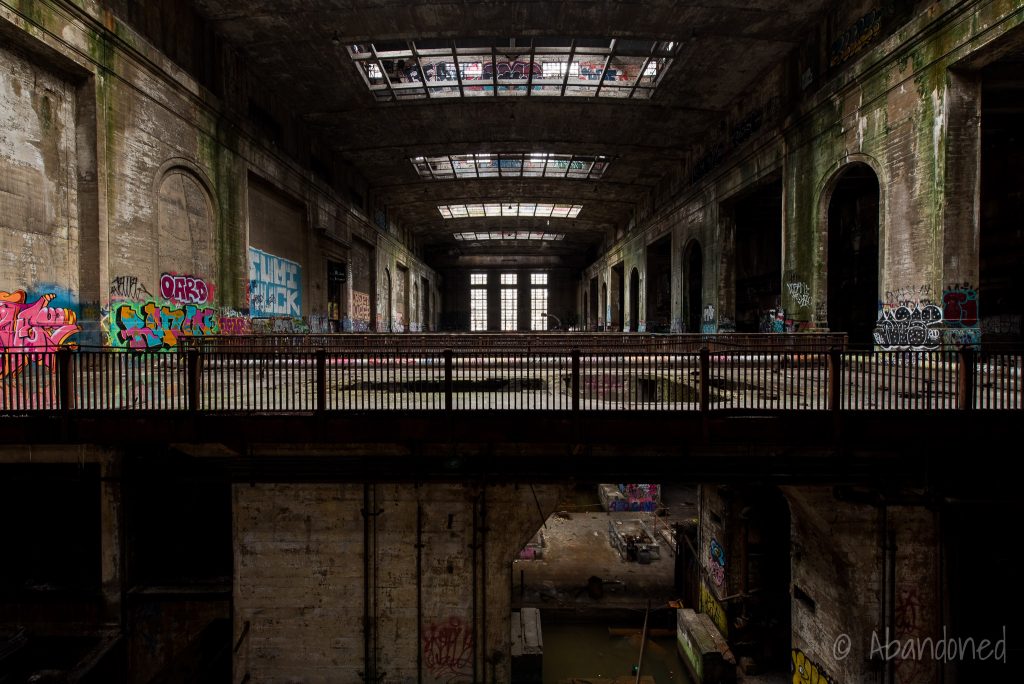 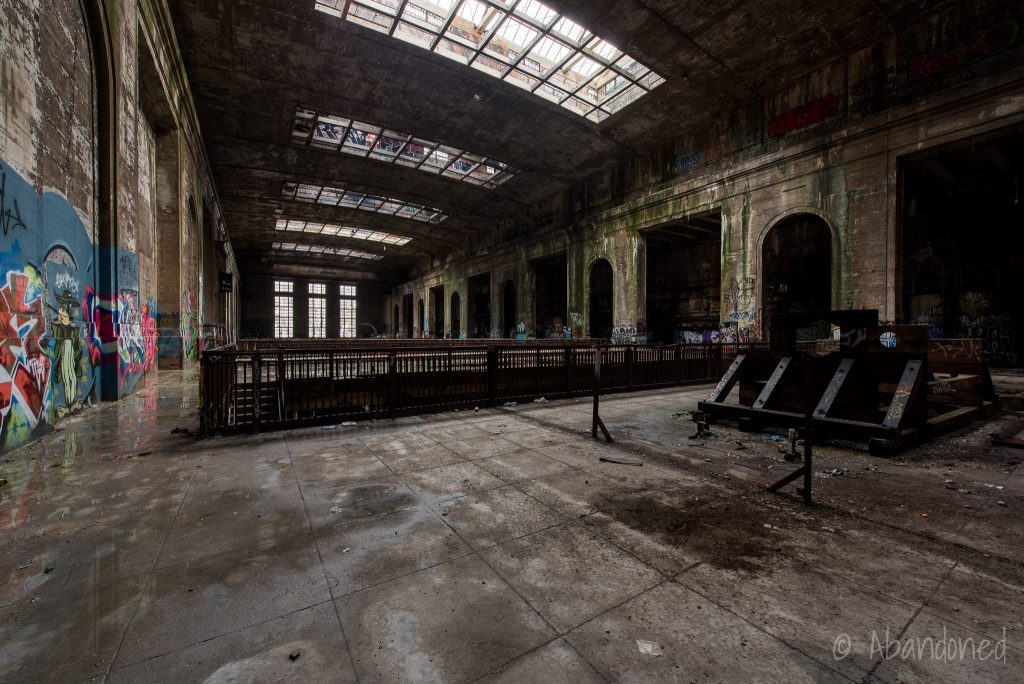 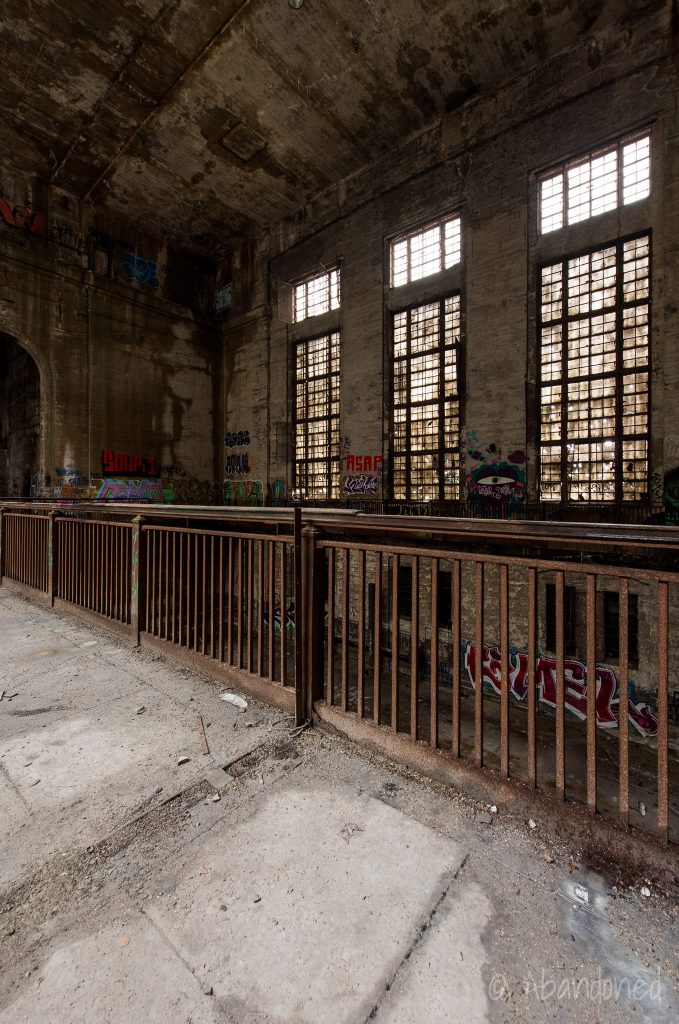 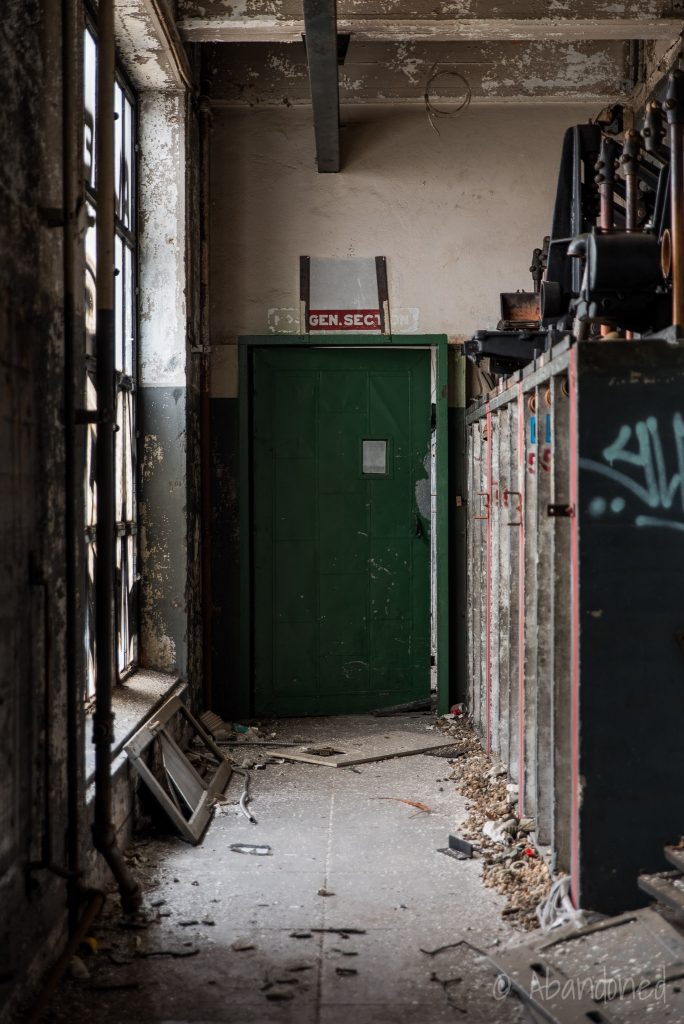 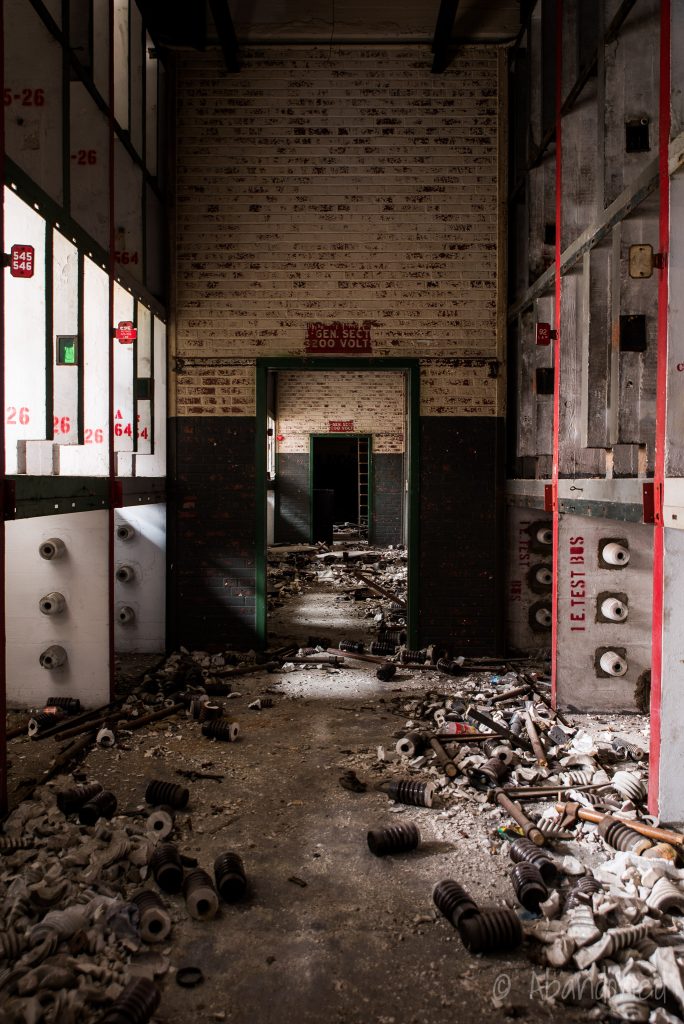