The Dery Silk Mill is an abandoned silk mill in Jim Thorpe, Pennsylvania. It was built in 1888 by George Dery and was in operation until 1980.

Desiderius George Dery, of Hungarian descent, was born in 1867 in Vienna, Austria-Hungary. 2 After obtaining a degree from the Vienna Textile Academy in silk-making, he left for the United States and arrived in Paterson, New Jersey in 1887. 1 2 Not long after, Dery became the superintendent of a silk mill. 2

In 1888, Dehy constructed a silk mill in East Mauch Chunk (later East Jim Thorpe) that rapidly expanded to employ 400 workers. 1 The location of the mill in Pennsylvania took advantage of female and child labor, which was more abundant than in New Jersey. 3 It included 100,000 square feet for a basic loom implemented by an overhead Jacquard machine and harness. 5

By 1914, Dery’s silk mills expanded to 14 separate operations and employed over 3,600 workers, becoming the largest single private producer of silk in the world. 1 2 Dery chose to locate the headquarters on the 7th floor of the Allentown National Bank Building in Allentown. 2

Dery rapidly expanded during World War I, growing to encompass 42 silk mills and 10,000 workers. 2 In Pennsylvania, there were five mills in Allentown, two in Bethlehem, and one each in Catasauqua, East Mauch Chunk, Emmaus, Scranton, Marietta, Olyphant, Forest City, Northampton, and Wind Gap. 4 In an attempt to dominate the market and form a monopoly, Dery took out a number of loans but was countered by the Japanese, whose international silk interests were threatened by his rapid rise. To counter Dery, the Japanese dumped large amounts of raw silk on the domestic market, causing Dery’s mills to become rapidly unprofitable.

Dery’s creditors demanded repayment of his loans; in response, Dery issued bonds. 2 It was discovered in 1922 that the value put on the company’s assets, on which the value of the bonds was based, was fraudulent. The creditors went to federal court, which imposed a receivership to take over Dery’s silk mills.

The Dery Silk Mill was acquired by the Amalgamated Company in 1924. 1 The company installed 50 new looms, capable of crepe and two-tone weaving as the old machines were only capable of producing one straight weave. 6

In December 1929, the Dery Silk Mill was acquired by Louis and Samuel Zaleshitz, who formed the S. Zaleshitz Company. 5 Samuel headed the New York City sales operation and Louis operated the silk mill.

Silk production peaked in 1924. 4 By 1941, rayon and acetate began to dominate the textile industry. During World War II, the federal government froze the import of silk from Japan but it did little to stem the decline of silk processing for manufacturing.

By the 1960s, Zaleshitz’s mill produced 150 different color combinations, and manufactured fabrics used for draperies, dresses, fur coat linings, neckwear, shoe fabrics, and upholstering. and employed 250. 5 But by the next decade, inefficient, aging plants and high costs led many mills to close in the northeast and relocate to the South. Zaleshitz continued to operate the Jim Thorpe operations on three shifts, with 40 people per shift, until 1980 when the facility closed.

In May 2005, Alexander Spivak of Queens, New York purchased the mill and attempted to redevelop the site into light industrial uses, 8 but failed to obtain financing. 7

Auburn Station Realty Corporation developed plans in 2007 to redevelop the silk mill into 30 apartments. 7 The company had formerly redeveloped a former silk mill in Allentown into apartments. John Bishop of Auburn Station was granted a variance by the borough Zoning Hearing Board on April 11 to convert 70,000 square feet into residences. The project also failed to obtain financing. 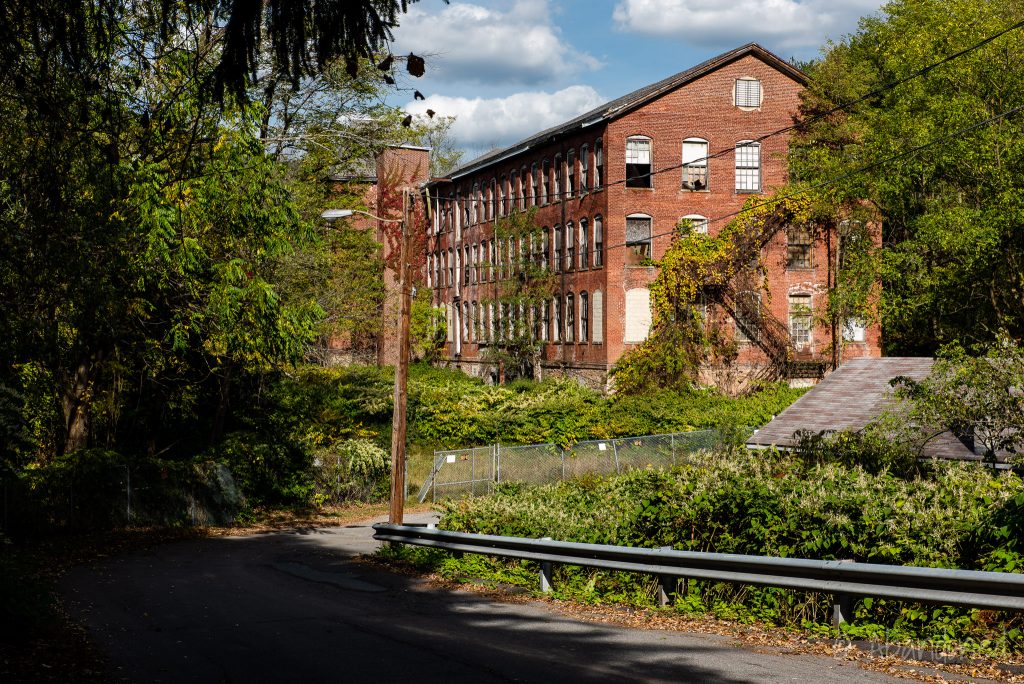 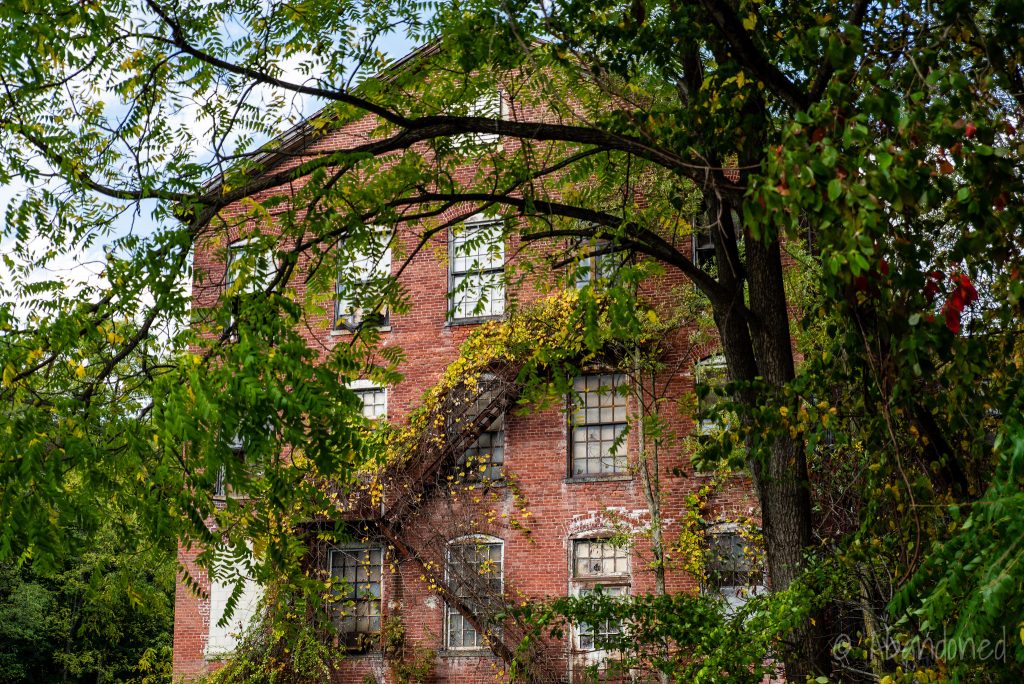 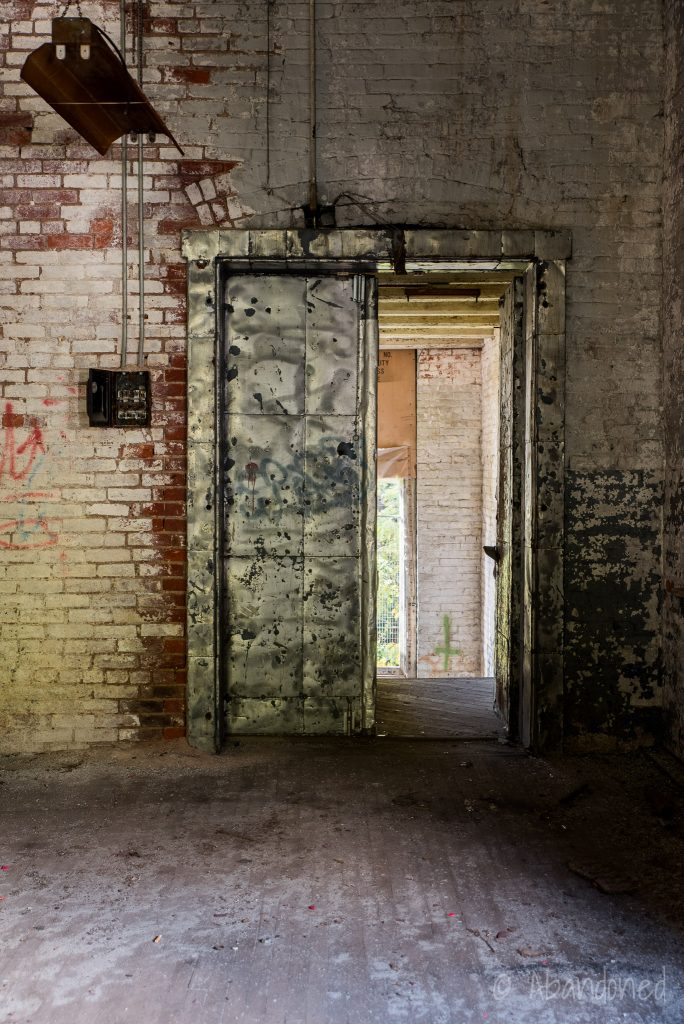 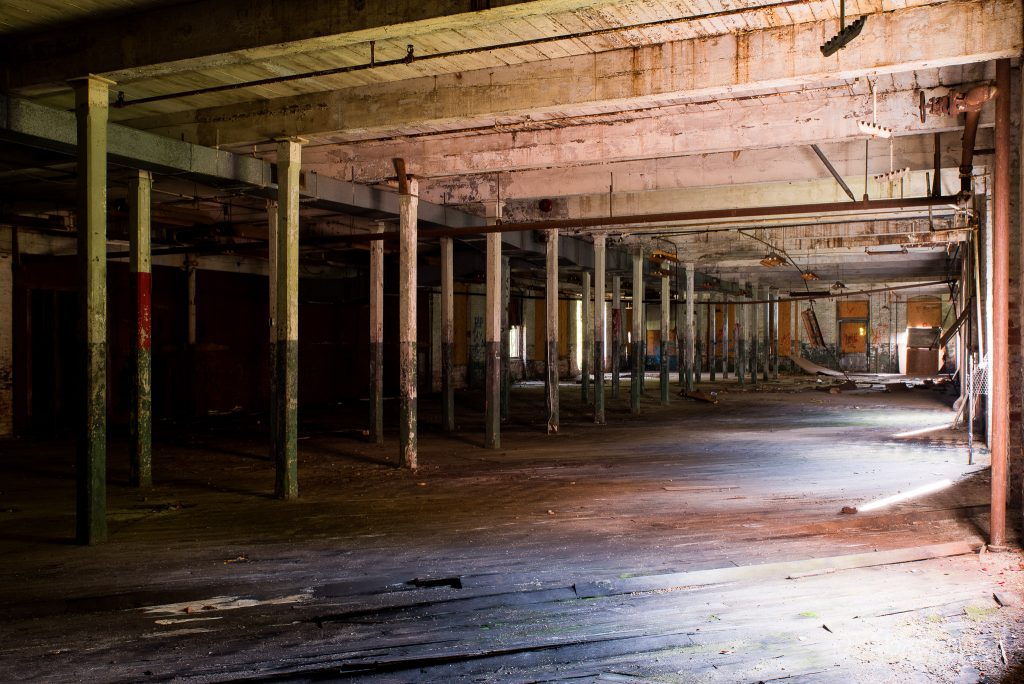 The Frank Sherman Company was a former scrap metal dealer in Youngstown, Ohio that incorporated in 1947 and closed in 2001 after it was discovered that fraudulent transactions were occurring between t…
END_OF_DOCUMENT_TOKEN_TO_BE_REPLACED
Category ExplorationsPosted on August 4, 2011January 23, 2015

A foggy morning at the ammunition plant

Camera bag? Check. Tick repellant? Check. Light? Check. I set out one night with another photographer to capture the early morning scenery at the Indiana Army Ammunition Plant, the largest ab…
END_OF_DOCUMENT_TOKEN_TO_BE_REPLACED
Category In FocusPosted on April 14, 2014April 22, 2015