General Hospital for the Insane is a partly abandoned psychiatric institution that treats people with mental illness.

The establishment of the General Hospital for the Insane (GHI) was the first significant public commitment to institutional care for the psychologically unwell in the state. 1 4 Before the establishment of GHI, mental disorders were deemed incurable and were regarded as a symptom of criminal behavior. Individuals were met with physical restraints and punishment rather than treated for their mental illnesses. Additionally, the mentally ill were often kept in jails and prisons, reinforcing the association between mental illness and criminal behavior.

For those who could afford such care, private asylums, such as the Hartford Retreat, offered some hope. 1 4 Founded in part by the state, the Retreat was unsuitable for the care of the large numbers of the state’s indigent insane.

Legislative committees in 1838 and 1840 investigated alternatives for housing the state’s mentally ill. 1 Both committees suggested the construction of such a state-supported facility, and a site, Fort Hill, was selected. In 1865, the Joint Select Committee met to discuss the resources required for such a hospital. 4 Dorothea Dix, a nationally known mental health advocate, supported the effort. With her support, the General Assembly passed the Act to Create a Hospital for the Insane in the State of Connecticut in 1866.

The state accepted a 150-acre tract offered by a nearby town that was once part of the Town Farms, an almshouse. 1 The almshouse had housed the local poor and insane under one location. An adjacent 80 acres was purchased to have a larger continuous tract of land.

The hospital was originally designed so that a single large building would suffice for the campus. 1 The layout was based upon the Kirkbride Plan, a system of mental asylum design advocated by Thomas Story Kirkbride, which involved designing buildings where exposure to natural light and fresh air was imperative. Most buildings under Kirkbride were built with a batwing” floor plan, with wings that sprawled outward from the center. The center housed the administrative offices, with the wings housing female and male wards. Sloan and Hutton of Philadelphia conducted the actual design work.

The main building was to be 768 feet long and accommodate 450 patients. 1 The center would be four stories high, 60-feet wide, and 120-feet deep, flanked by six wings, three on each side, each three-stories high.

Construction was begun under the supervision of the GHI’s first superintendent, Dr. Marvin Shew. 1 The south wing was finished by May 1868, and the center was all but done by 1869. By 1871, with an average of 233 patients, the hospital was overcrowded.

By the north wing was finished in 1874, but it did little to alleviate the overcrowding concerns. 1 Private rooms that early residents had were subdivided with additional beds

The first floor of the central pavilion housed an officers’ dining room, storerooms, and accommodations for the housekeeper and several female employees. 1 The second floor had offices for the medical staff, the trustees’ room, the clerk’s office, a dispensary, and a reception room for patients. The rear of the central building contained a bakery, kitchen, scullery, laundry, and a fitting shop on the first floor, and a sewing department and dining room on the second floor.

The wards included private rooms for nearly all patients, and each of the eight departments included a dining room and a day room. 1

Staff and patients would awake at 5 am, 5:30 am, or 6 am, depending on the season. 1 Meals, physicians’ rounds, and bedtime were marked by bells, as well as daily activities. Activities included religious services, lectures, and concerts, designed to distract patients from “distorted thoughts.” Employment was also part of the regimen, which included manual labor in the carpenter’s shop, on the farm, in the sewing room, or in the laundry.

The activities had little effect on both the mental health of the patients and the ability to shrink the ever-growing population. 1

GHI decided to adopt the cottage system of hospital design not long after the center building was completed. 1 It would allow for the segregation of chronic and unruly patients into different structures. In 1872, two houses south of the hospital were acquired and fitted for 14 male and 16 female patients.

In 1881, with GHI bursting at the seams with 528 patients with a waiting list of 80 others, the state authorized the first significant addition. 1 An annex, later called the South Hospital, was built to house 262 quiet but chronic patients. It was dedicated on July 20.

The next addition, New South Hospital (later Woodward Hall) was constructed from 1885 to 1887 to house 300 chronic and epileptic patients. 1 By the time it opened, GHI had 1,146 patients with many more on the waiting list. Another addition, for 250 chronic patients, was designed by Curtis and Johnson of Hartford and built in 1894. It was modeled after the South Hospital.

Outside of the physical constraints of holding so many patients, other problems snarled the newly minted mental asylum. The ratio of patients to physicians increased substantially, from 116 to 1 in 1871 to 230 to 1 by 1890. 1 The central concepts of moral treatment and personal care had been sacrificed for the sake of warehousing individuals.

Additionally, a law passed by the state in 1872 made the asylum responsible for caring for the state’s insane convicts. 1 The carpenters’ shop was remodeled in 1879 to house the criminally insane in 27 single rooms to separate the convicts from the general population. An addition (Stanley Hall) to providing a dining room and day room was completed shortly after.

In 1898, Dr. Charles Page became the hospital superintendent. 1 He began his tenure by reorganizing the hospital and redefining its role, rejecting moral treatments, and instituting a system of therapeutic procedures. Each patient was classified in a category according to their symptoms, and each class of a patient was uniformly treated in a prescribed methodology.

Curable patients were sent to the North Hospital (Weeks Hall) where they could receive individual treatment, while the unruly and physically infirm chronic patients were placed in the South Hospital (Woodward Hall). 1 The remainder of the hospital was used to house the “quiet” chronic patients. The separate ward dining facilities were eliminated in favor of a central dining hall, which was completed in 1904 (Page Hall).

Occupational therapy was expanded under Page. 1 The Annex Shop and the Main Cottage Shop produced a variety of wares that were for sale. The farm was also expanded, and a greenhouse was built. By 1900, over $21,000 worth of produce was grown on a yearly basis.

In 1896, a pathology laboratory was established to research the microbiological causes of mental illness. 1 Additionally, somatic therapy was introduced that included the use of drugs and hydrotherapy. A training school for nurses and attendants was also formed in 1896 to bring about consistency in care.

Dr. Henry Noble, who was appointed superintendent in 1901, continued on many of the same initiatives as his predecessor. 1 The nursing school was reorganized in 1904 to include a two-year course. The school itself was also moved into the Smith Home, which was built in 1910-11.

While the physical facilities of the campus grew in the 1940s and 1950s, few new buildings were erected in the years following. Deinstitutionalization, the process of replacing long-term psychiatric hospitals with community mental health services, began in the 1960s. The movement towards deinstitutionalization was born out of a socio-political movement for community-based services and open hospitals and the advent of psychotropic drugs and financial rationales. 2

CVH’s resident population was gradually reduced by releasing stabilized patients, shortening inpatient stays, and reducing admission and readmission rates. Programs were implemented to mitigate the reinforcement of dependency, hopelessness, and other maladaptive behaviors.

Many of the buildings that were once bustling at the seams with patients are unused today. The hospital is still in operation as a psychiatric care facility, operated by the state Department of Mental Health and Addiction Services.

Noble Hall, designed by William D. Johnson, was constructed in 1908 to provide entertainment and events for patients. 1 4 The 20,000 square-foot, square brick Colonial Revival structure included a two-tiered seating structure for 995 seats. 4 The basement was used for a roller skating rink and dances.

Noble Hall was last used by the hospital in the 1960s. 4 It was then used for local high school graduations, church services, and space for area performing groups until the early 1980s.

Manderlee Productions, a children’s theatre group from Rocky Hill, was in negotiations to lease and renovate Noble Hall in 1996 but were unable to obtain financing. 4 5 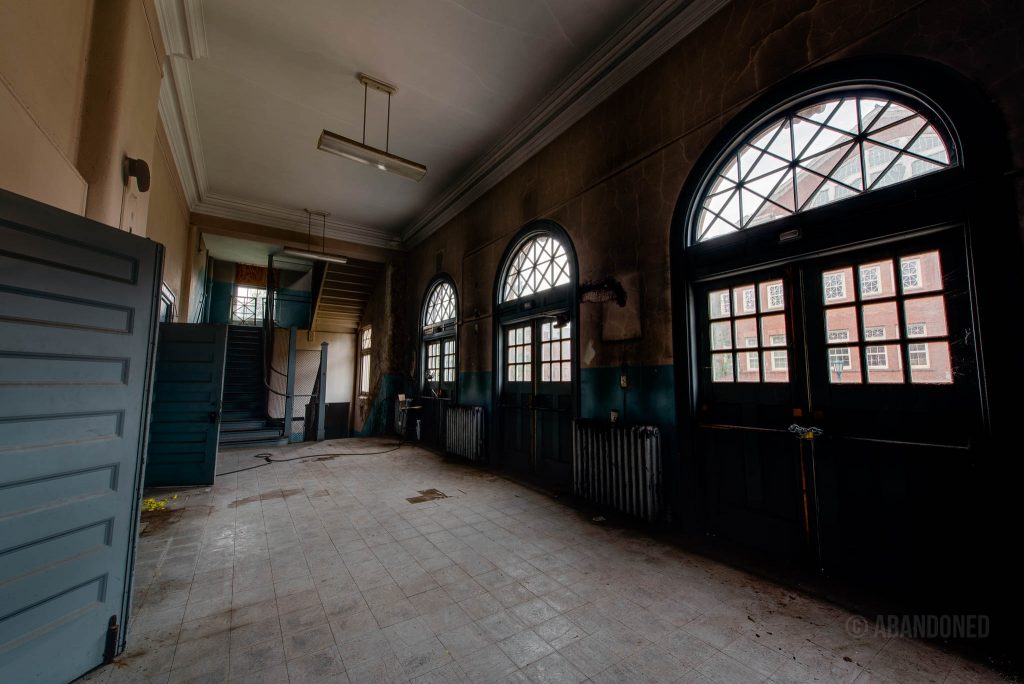 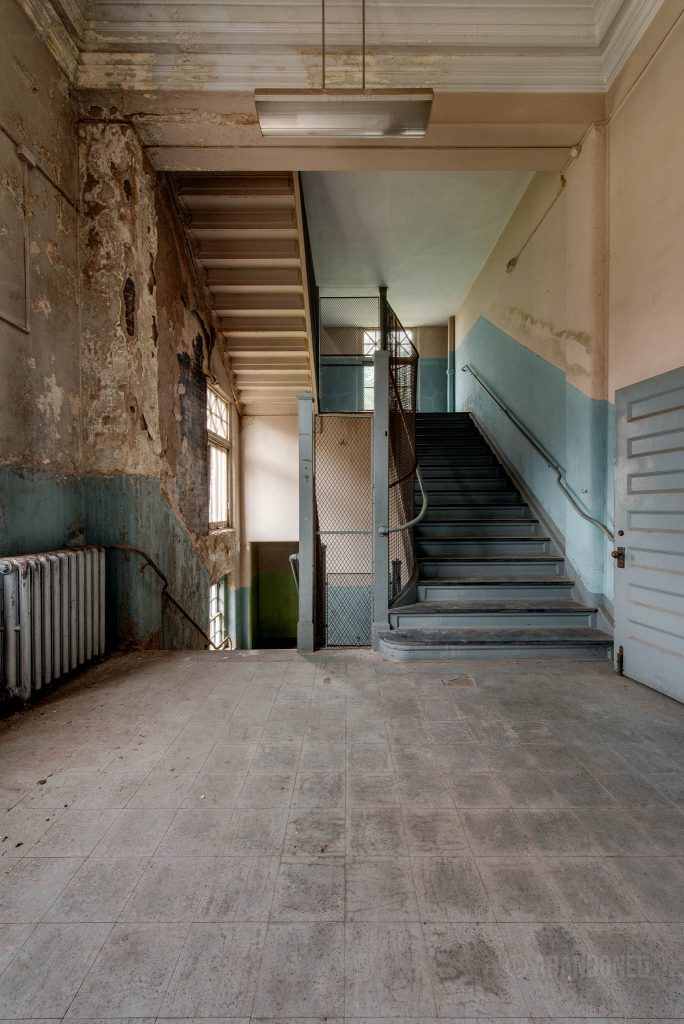 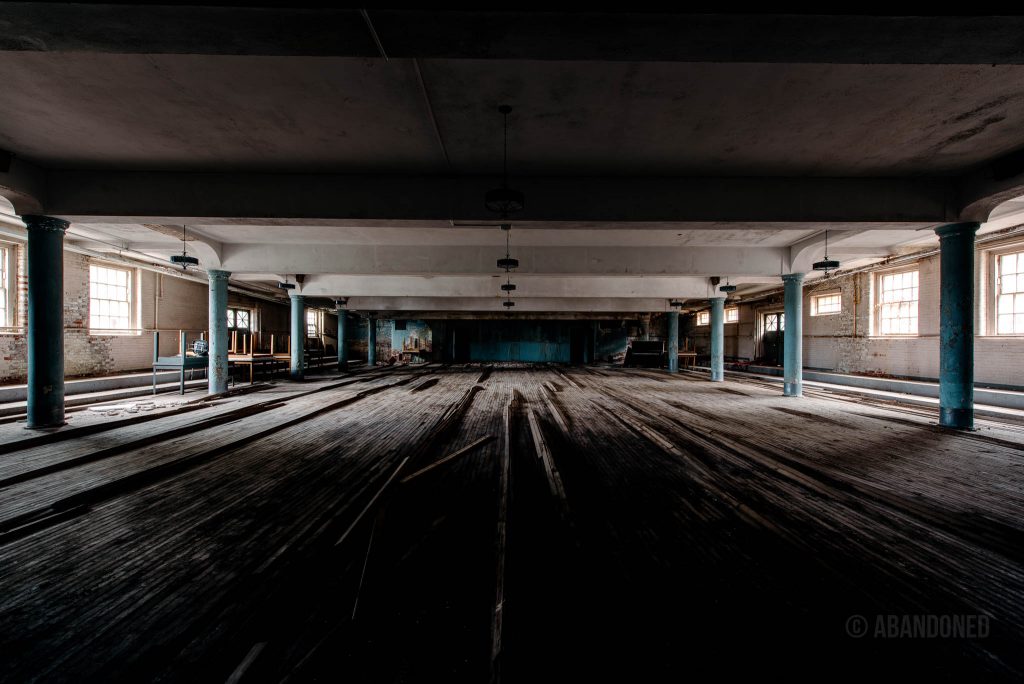 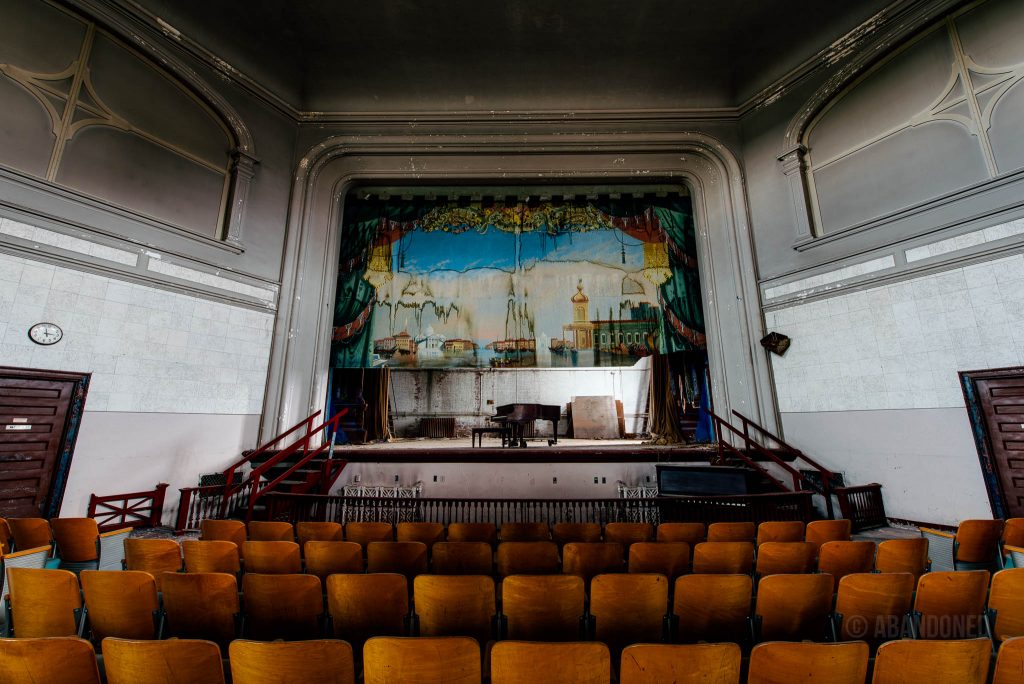 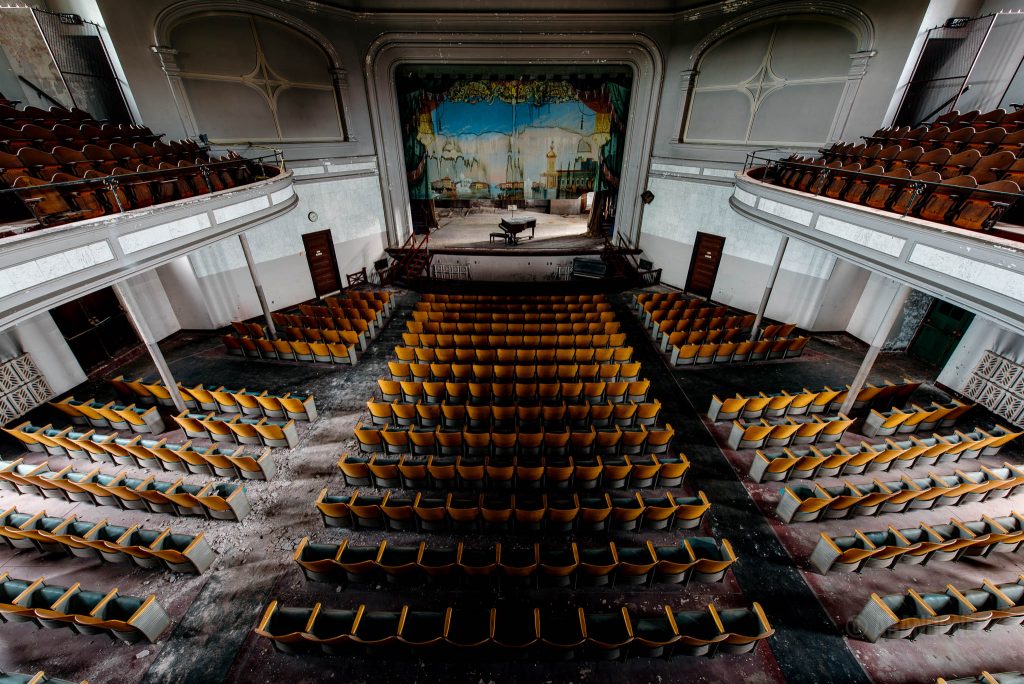 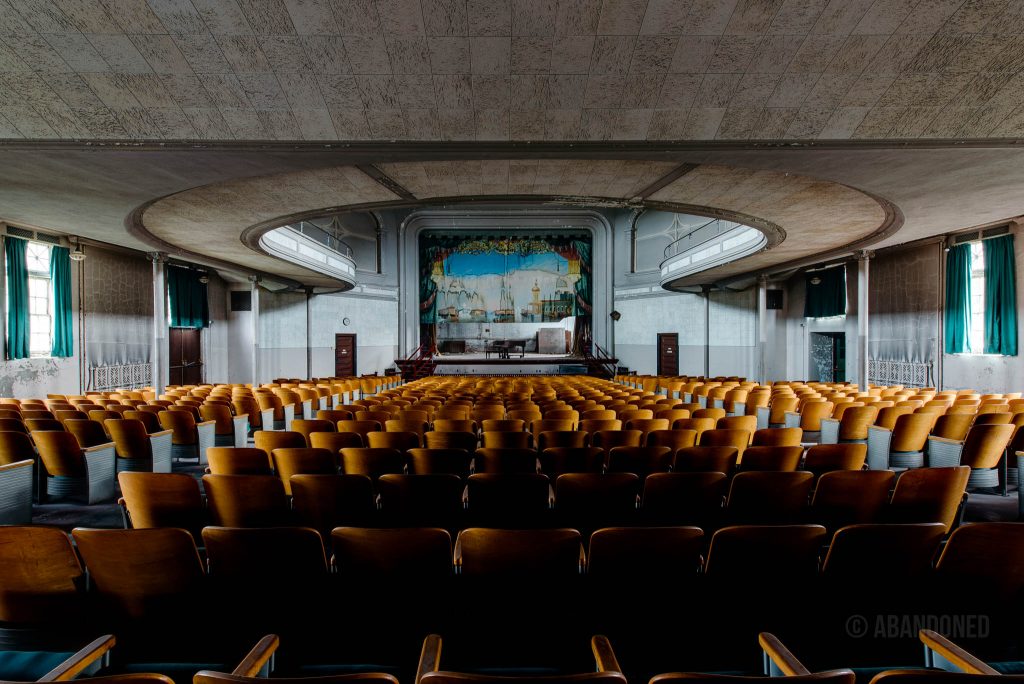 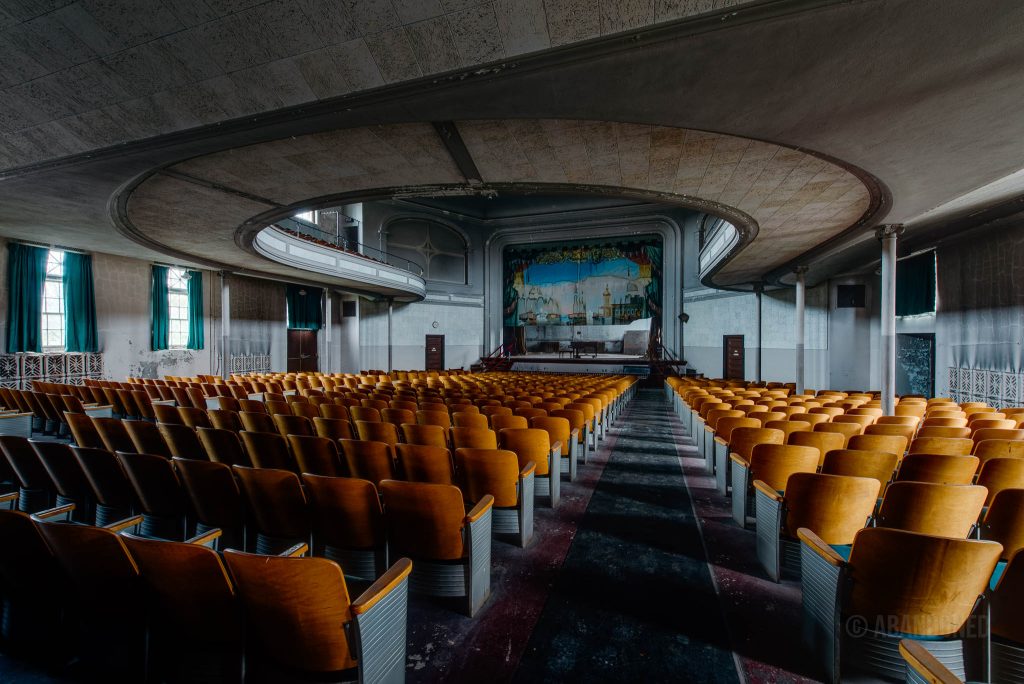 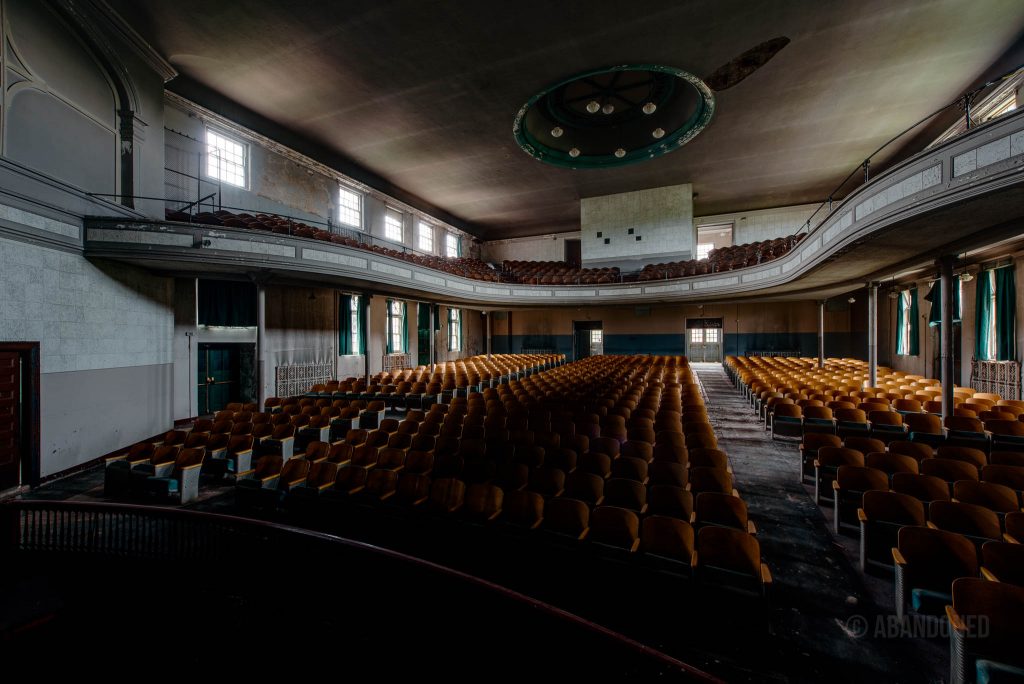 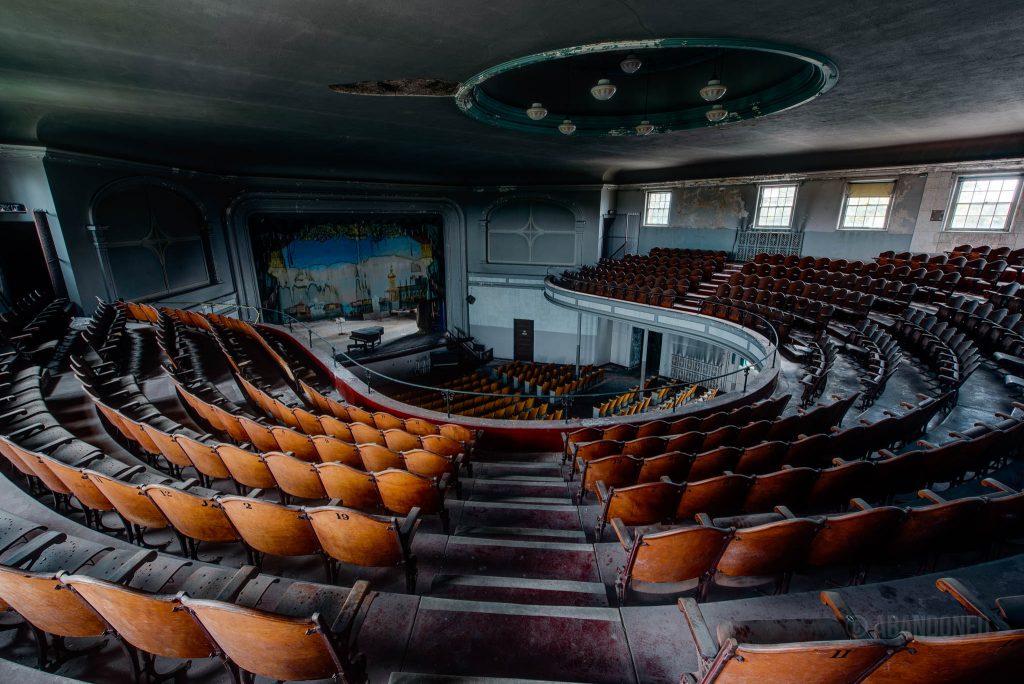 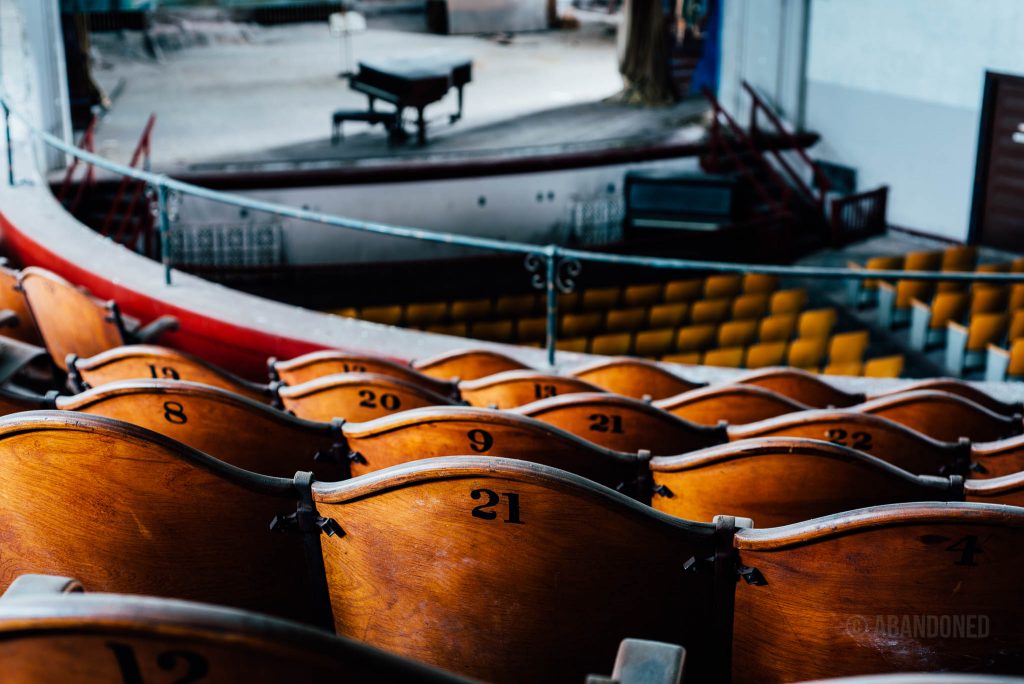 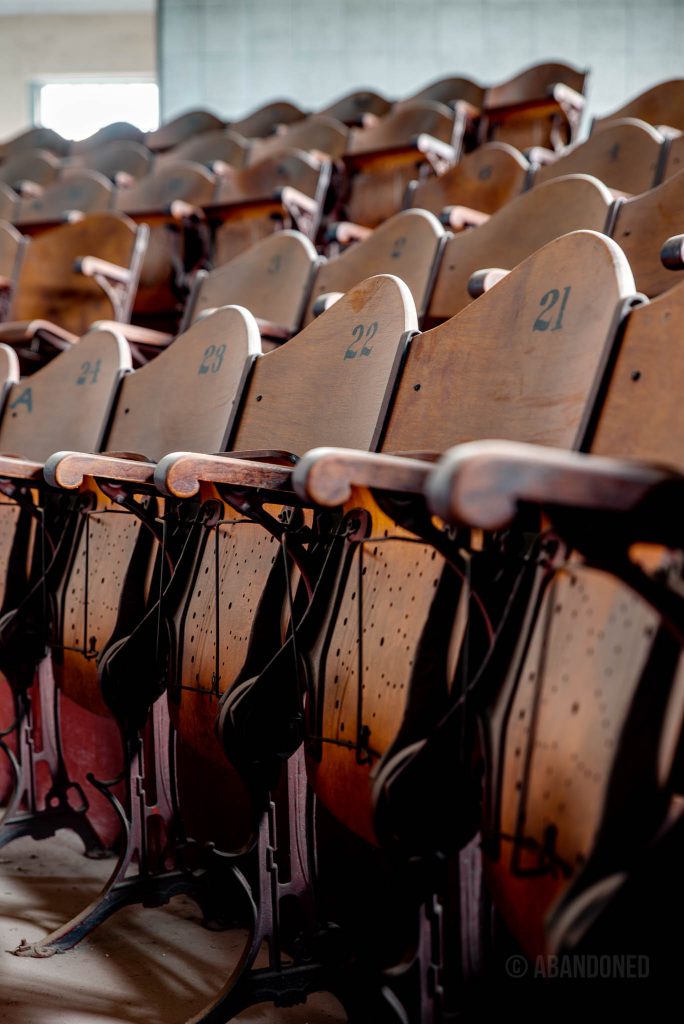 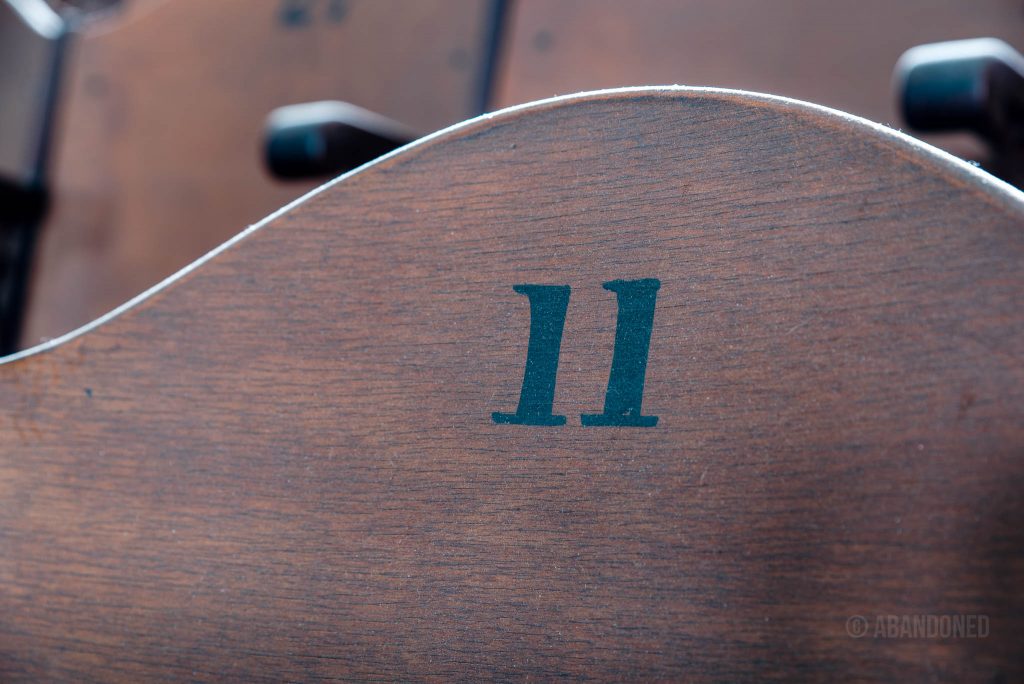 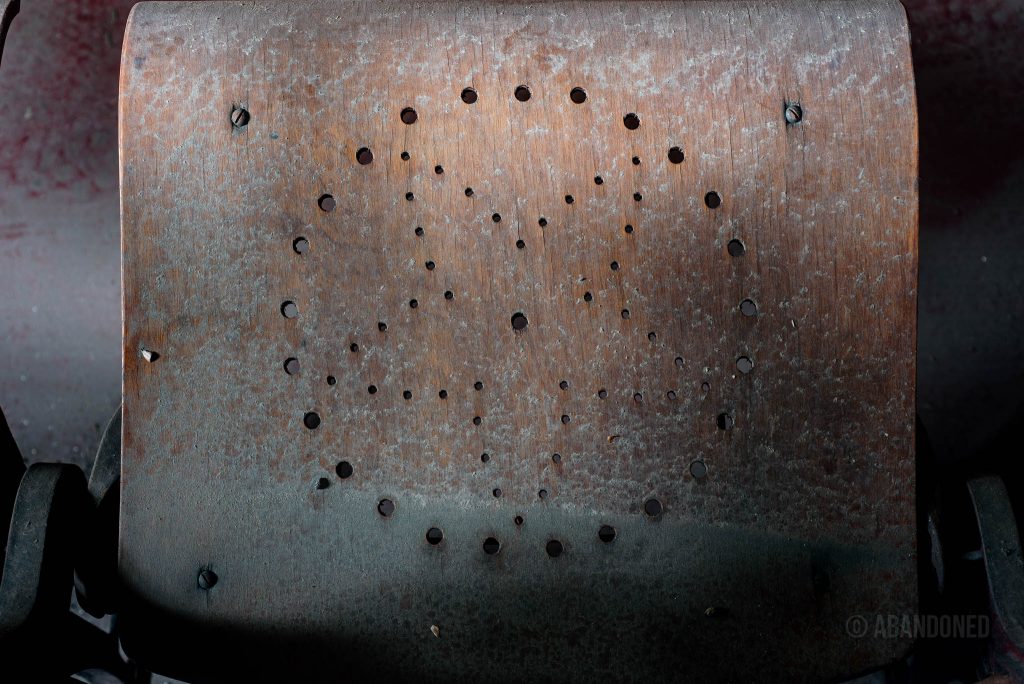 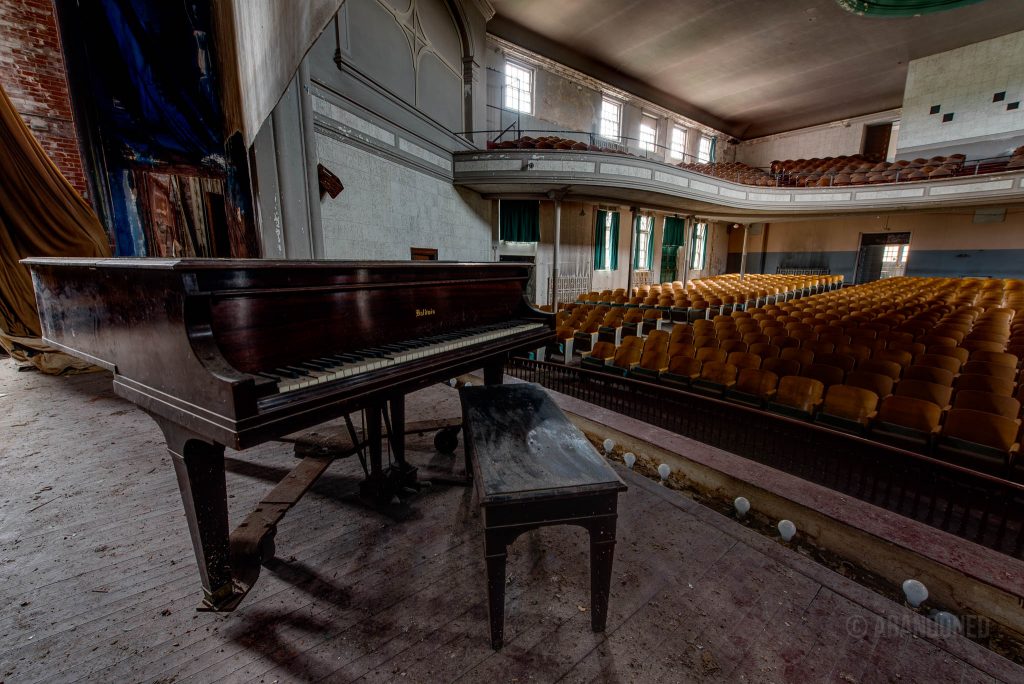 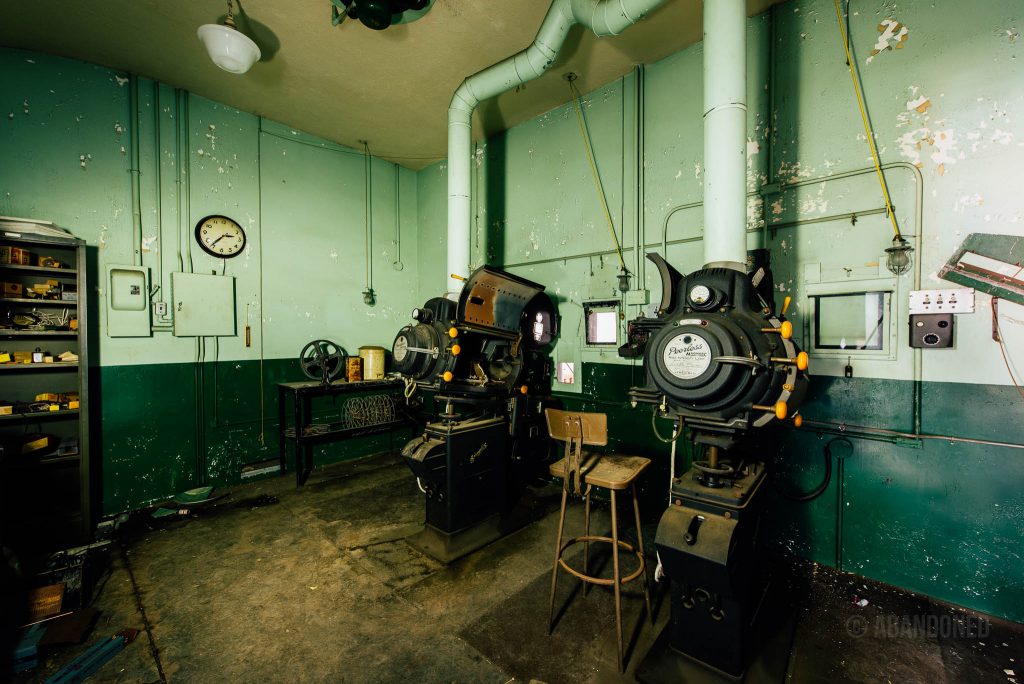 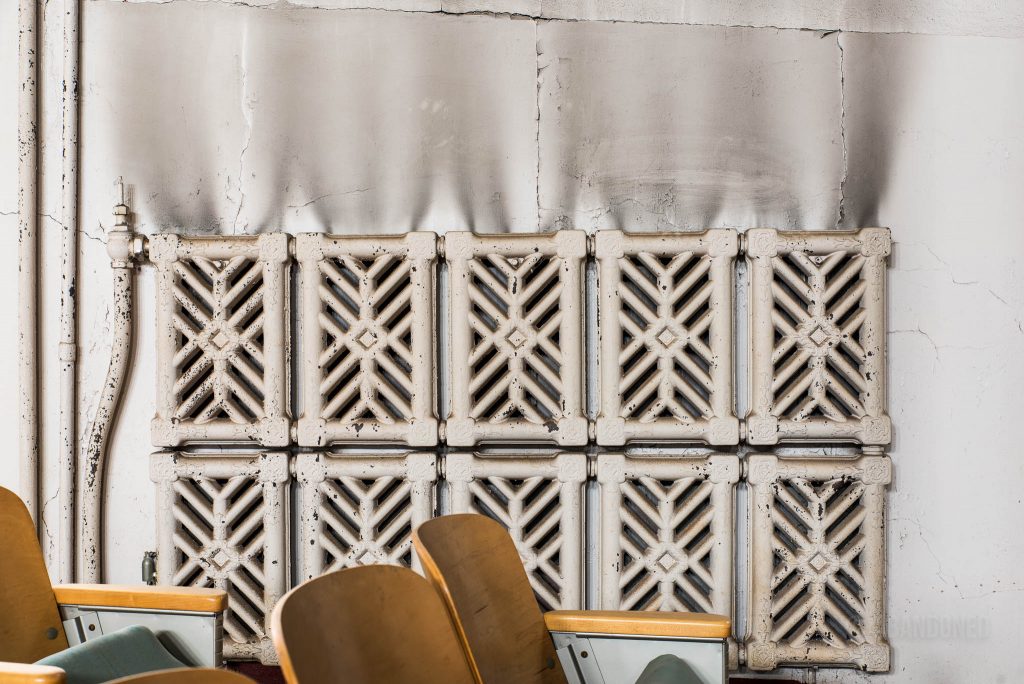