The Kentucky, Barren, and Rough River consists of seven active, closed, and demolished locks and dams.

Before the dawn of the automobile and the first-rate railroad, the Green River was the primary route of access to locations in western Kentucky. Early pioneers in the Green River valley used the river and its tributaries to send produce in flatboats to New Orleans and wood to the massive sawmills in Evansville. 6 In 1828, the McLean was the first steamboat to reach Bowling Green.

In 1828, the Commonwealth established a Board of Internal Improvements which requested that the United States Army Engineers survey the Green River, as well as other major rivers. 1 6 It employed Gen. Abner Lacock, former Congressman and Senator of Pennsylvania and engineer on the Pennsylvania canal system to help device where locks and dams should be located at. As a result of those efforts, the state initiated a canalization project to improve the navigation on the Green and Barren Rivers up to Bowling Green, the first project of its kind in the nation. The project included the construction of the following locks and dams:

The dams were timber crib, rock-filled structures with sandstone masonry abutments laid in Louisville hydraulic cement, except for No. 2 which was laid in common lime. 6

Although the project was not entirely completed in 1841, the steamboat Sandusky was able to lock through to Bowling Green. 6 Over $2,000 in tolls were collected during the first year of operation and regular steamboat operations between Evansville and Bowling Green was inaugurated. The citizens of Bowling Green constructed a six-story warehouse at the river and a mule-powered railroad to connect the landing with its business district, providing an economic boom to the region.

The locks and dams were neglected during the Civil War, and in 1868, rather than expend the funds to repair the structures, the state legislature leased the works to the Green & Barren River Navigation Company, an organization of bankers, attorneys, and steamboat operators led by W. S. Vanmeter, the steamboat captain who had obstructed Lock and Dam No. 3 for the Confederacy in 1862. 6 The company operated the locks, opened mines, and ran its own steamboats, the Evansville and the Bowling Green. Since the company-owned vessels paid no tolls, the company drove away the competition and established a de facto monopoly on river traffic.

Gen. Don Carlos Buell, a former Union General who settled at Airdrie along the Green River, had opposed the monopoly and desired a river free of tolls. 6 He led a campaign against the company and invited Congressional action in 1879. An investigation by the U.S. Army Corps of Engineers (ACoE) noted that tolls on the rivers were excessive and that a monopoly did exist. Congress directed the ACoE to begin the federal purchase of the locks and dams in 1886 and the state legislature ceded its rights to the facilities. In 1888, the ACoE purchased the operations for $135,000 6 and established their headquarters for the Green River navigation system in Woodbury. 1

Green River Lock & Dam No. 3, heavily damaged during the Civil War, collapsed in 1887. 6 Other locks were in poor condition and the river channel was littered with downed trees and other obstructions. Difficulties were experienced in pumping water out of the cofferdam in 1889 but all of the repairs had been completed by November 10, 1890.

R. H. Fitzhugh, the assistant to Col. William E. Merrill, examined the Green River in 1879 and determined that it would be feasible to construct eight locks and dams above Lock & Dam No. 4 at Woodbury to extend slackwater navigation to Brownsville, Munfordsville, and Greensburg, open mineral and timber resources along the Nolan River, and establish riverboat excursions to Mammoth Cave. 6 Another examination of the river was authorized in 1890 and construction of Lock & Dam Nos. 5 and 6 were authorized. In 1906, the steamboat Chaperon made the first run from Evansville to Mammoth Cave, the start of regular tourist and excursion traffic.

By the turn of the 20th century, the Green and Barren Rivers were fully navigable with six-foot depths from the Ohio River near Henderson to Bowling Green and Mammoth Caves, with six locks along the Green and one lock and dam along the Barren providing safe passage for passengers and freight alike. 1 6 But riverboat service along the rivers ceased in 1931, and the development of new highways and railroads throughout the region caused freight traffic to decline significantly. 1 Commercial navigation on the upper Green River had ceased by 1951, 6 however, the lower Green River continued to be used extensively by the coal and aluminum industries.

In 1953, a report published recommended that Lock & Dam No. 2 be reconstructed and Lock & Dam No. 1 be rehabilitated and that the channel be widened and deepened. 7 Both dams were extensively modified in 1954-56.

In the 1960s, the Committee on Public Works of the U.S. House and Senate passed a resolution the authorized ACoE to review the Green River navigation system and investigate alternatives for replacing or modernizing Green River Lock & Dam Nos. 3, 4, and 5, and Barren River Lock & Dam No. 1. 7 An environmental impact statement was issued in 1975, and a feasibility study was conducted in 1978. The study was terminated because none of the recommended alternatives were considered economically realistic..

By 2002, more than 10 million short tons of sub-bituminous coal, petroleum coke, and aluminum ore was shipped on the river.

A state engineer had surveyed the Rough River in 1836 and recommended a slackwater system to permit the development of timber and mineral resources. 6 In 1856, the Rough Creek Navigation & Manufacturing Company was formed and constructed a crude lock and dam about eight miles from the mouth of the Rough. Regular steamboat traffic developed up to Hartford but this ended when the company was abandoned.

Congress authorized a project to re-establish traffic on the river in 1890 and a new lock and dam, near the site of the old one, was completed at the cost of $85,000 in 1896. 6 It featured a lock with a chamber 123 feet long and 27 feet wide. Because of its remote location and the difficulty of bringing cut stone to the site, it was the first river lock to be built of Portland cement.

The timber crib of the dam at Green River Lock & Dam No. 1 was in poor condition by the 1960s and had developed significant leaks. 6 ACoE had resorted to the 19th-century technique for fixing the leaks by dropping hay and coal dust into the pools which were drawn into the crevices in the dams. The dam was eventually replaced with steel sheet-piling in 1970 at the cost of $1 million.

After 60,000 tons of coal were barged through Green River Lock & Dam No. 3 in 1976, and after rumors indicated that grain and other agricultural products may flow from the upper Green River, the dam was repaired with new lower gates in the lock. 6 It replaced manually operated capstans with an ingenious device that allowed for the operation of the gates with a small electric drill working through a reduction gear. It was the last in the United States to be operated by hand. Traffic never materialized along the upper reaches of the river and Green River Lock & Dam No. 3 was placed into caretaker status in October 1981. 3

Discussions to remove Green River Lock & Dam Nos. 5 and 6 had been discussed for decades in order to restore the naturally flowing waters of the waterway in order to support healthier, native plant communities, enhance fish and wildlife habitat, and enhance recreational opportunities. The dam removals were also pressed in order to lower water levels inside Mammoth Cave which was partly inundated from slack water. The movement to remove the barriers was supercharged after a hydraulic hole was discovered in the abandoned Green River Lock & Dam No. 6. In 2017, the dam was dismantled.

Green River Lock & Dam No. 5 was removed in September 2021 at the cost of $4.6 million. 5 The dam removal, the largest in the state’s history, was made possible by the Nature Conservancy, U.S. Fish and Wildlife Service, ACoE, the Kentucky Department of Fish and Wildlife Resources, and the Kentucky Waterways Alliance.

Today, ACoE operate only the first two locks along the Green River. 4 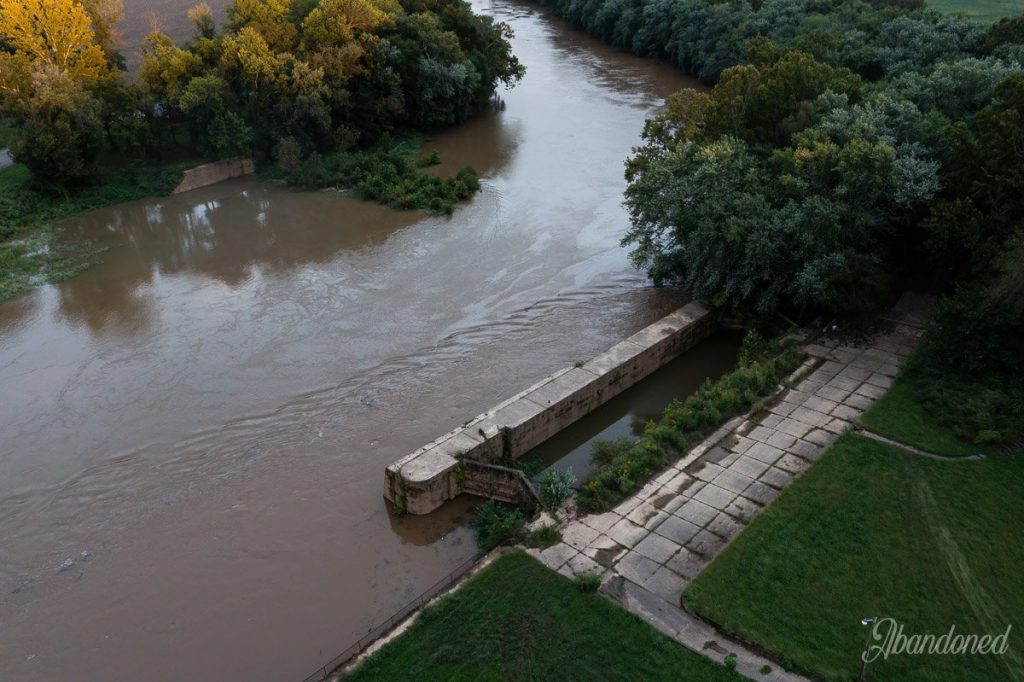