The Holy Trinity Church is a now-demolished Roman Catholic church in Duquesne, Pennsylvania. It was home to a Slovak congregation from 1901 to 1970.

The first call for a Slovak church in Duquesne came in 1901, when various worshippers, with the assistance of Reverend Adalbert Kazincy from St. Michael’s Slovak Catholic Church in Braddock, began planning for the new church. 1 Father Kazincy held the first Mass at a worshipper’s home where 46 churchgoers attended. It was followed up with a morning Mass the next day. The gatherings became very popular, although it was straining Kazincy to travel from Braddock to Duquesne.

A petition was forwarded by a delegation to Bishop Regis Canevin for permission to build a permanent church in Duquesne. 1 Out of the names suggested for the church, Holy Trinity was selected.

A small frame building built in 1901 was soon filled to capacity each Sunday. 1 The first pastor, Reverend Nicholas Hodobay, lived with a local worshiper as there was no rectory. It was not until 1902 that a residence on South First Street was acquired for use as a rectory.

The second pastor of the church, Reverend John Uhlyarik, began preliminary work to build a larger brick facility in June 1904. 1 3 The new $40,000 church 2 was designed by F.W. Wilson of McKeesport in the Gothic Revival architectural style. 2 3 The building’s stance on the side of a hill, with its 150-feet tower, would evoke a commanding presence over the Monongahela River valley. 3 Wilson selected buff brick with stone trim for the 110-feet long by the 60-feet wide structure.

On October 21, 1904, in a ceremony attended by an estimated 8,000 people, the cornerstone was laid. 3 It was swung into place at 2 p.m. by a bishop, which was followed by a ceremony addressed by priests and other dignitaries. A parade, complete with eight brass bands, moved through the town.

Problems plagued the church’s construction. The original contractors, F.E. Shallenberger of Pittsburgh, failed to complete the contract. 4 A replacement crew was hired but they also failed to finish, and so the church and the trustees of the congregation were forced to conclude some of the remaining work. The sheriff also advertised the property for sale on two occasions due to lingering debt, but the obligations were met, and the finances shored up. Upon completion of the new church building, the debt load by the church stood at $40,000. The cost came to $37,500 for the superstructure, but the addition of altars and stained glass windows added another $12,500. 3

The old frame church structure was converted into a grade school, and the Sisters of the Incarnate Word from Victoria, Texas were brought on as teachers. 1 A residence was purchased adjacent to the rectory and converted for use as a nuns’ convent in 1906. In 1918, 16 acres of land was purchased for use as a cemetery, but heavy debts incurred during the construction of the church curbed any major expansion projects until those were paid off in the 1920s.

The Incarnate Word Sisters, facing travel hardships with the commute between Texas and Duquesne, resigned in 1940 and were replaced by the Vincentian Sister of Charity. 1 The original convent and rectory were demolished not long after and a more substantial brick rectory was erected in their place.

In 1955, the church and school were extensively remodeled. 1 A new roof was installed on the church, rectory, school, and convent. The twin church spires atop the church building were removed due to structural concerns over fears that they could blow over in a windstorm.

Remodeling was not enough for the ongoing costly maintenance plaguing the church. Planning for a new church structure began in the late-1960’s and an architect for the new facility, Joseph J. Balobeck & Associates of Pittsburgh, was selected. 1 The new stained glass windows and Stations of the Cross for the new structure were designed and painted by the Milcho Silianoff Studio of Greensburg. A contract for construction was awarded to The General Contractors of Pittsburgh.

A groundbreaking ceremony, held on Palm Sunday, April 7, 1968, was followed with construction beginning on May 7. 1 A cornerstone laying ceremony was held on August 24, 1969, with the new church building dedicated on April 25, 1970.

The abandoned Holy Trinity Roman Catholic Church roof collapsed after a strong rainstorm passed through on August 29, 2016. 6 The building was torn down in the following days. 7 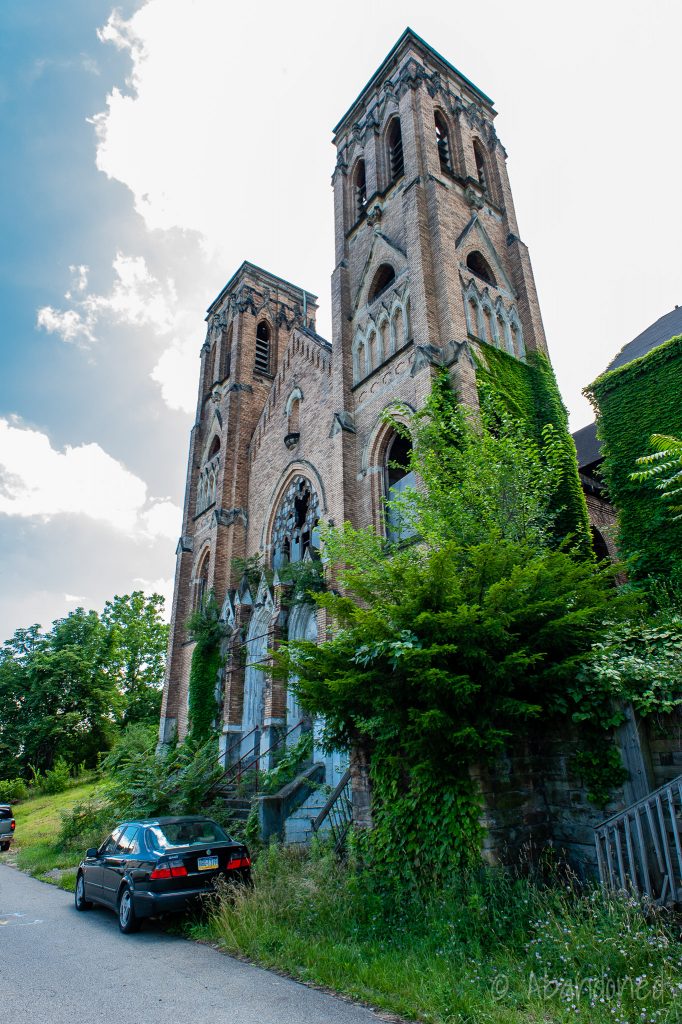 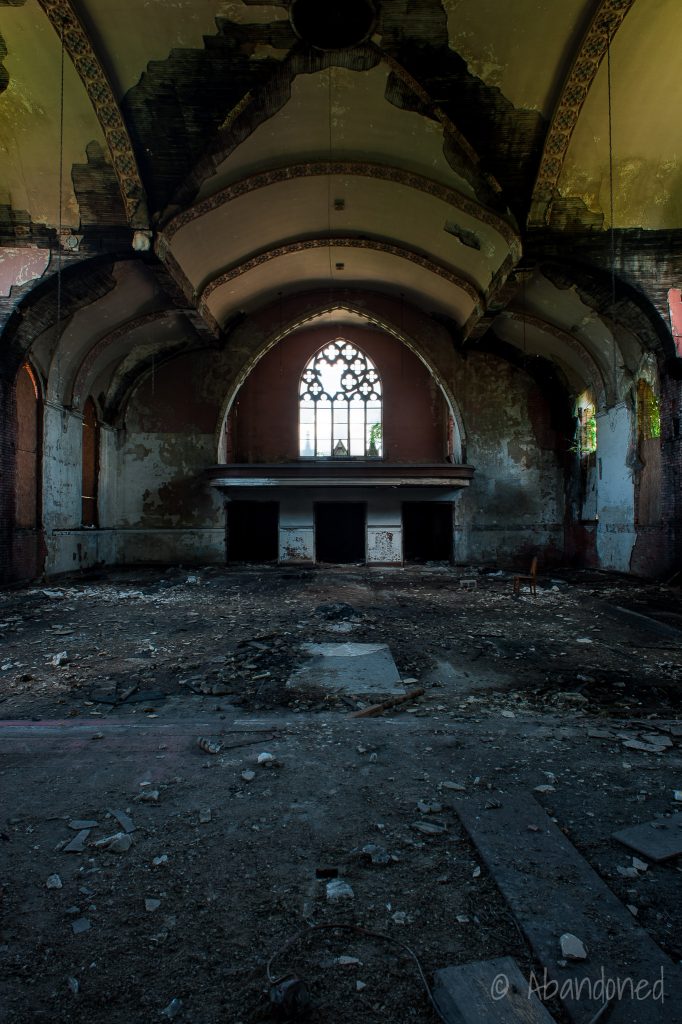 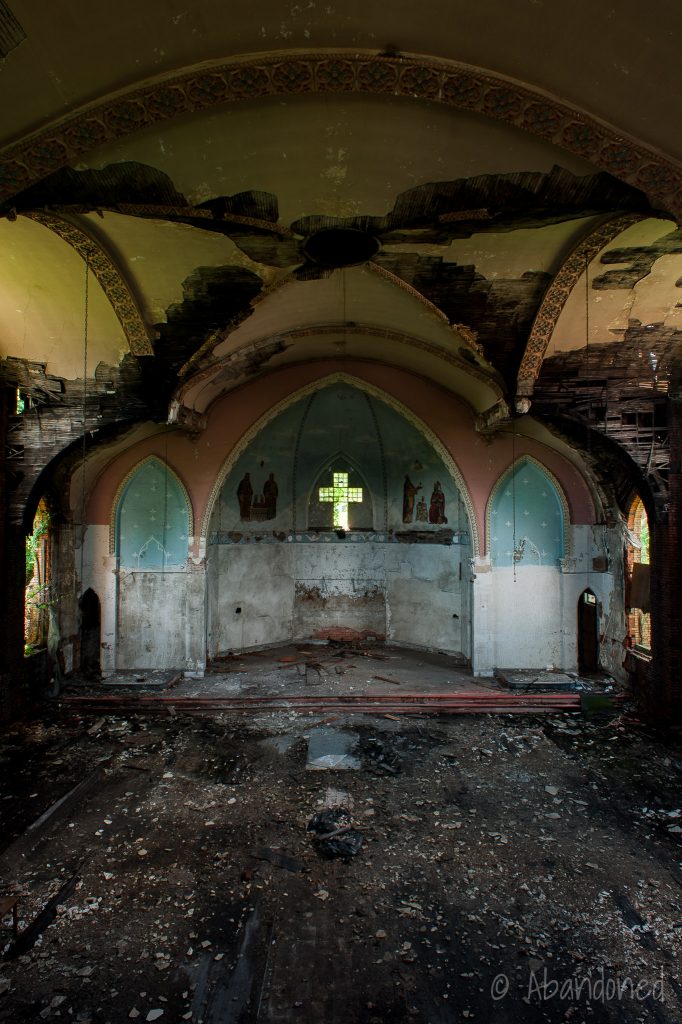