Kay Moor, West Virginia is a former Low Moor Iron company town. At its height, Kay Moor featured a coal mine and processing plant. Kay Moor was named for James Kay, a Low Moor Iron employee whose task was to construct the town at the base of the mountain.

The community of Kay Moor included four distinct areas: Kay Moor Bottom along the Chesapeake & Ohio Railroad (C&O), 1 Kay Moor Top aat the top of the mountain which also served as the terminus for the mountain haulage, 2 and Kay Moor Mine Nos. 1 and 2. 6 The original mine portal was located along the Sewell Bench and serviced the New River Coalfield’s 36-inch Sewell Seam, which featured low-volatile bituminous coal that was considered “smokeless. 2

The name Kay Moor was a combination of the name of the company, Low Moor Iron Company, and James Kay, the first superintendent of Kay Moor. 5 6

In 1873, Abiel Abbot Low, managing director of the Low Moor Iron Company in Low Moor, West Virginia, acquired land for Kay Moor for potential coal operations along the New River. 4 The property was not developed until 1899 when the Kay Moor No. 1 coal mine was opened 560 feet above the New River to supply coal to the company’s blast furnaces in Virginia. 4 5 6 The mine was connected to the C&O at the bottom of the mountain, Kay Moor Bottom, via a 1,000-foot single-track, 30-degree incline. The incline lifted workers and equipment up and down the mountain daily.

The mine itself was a simple room-and-pillar operation that initially used mule-driven rail cars. 1 Electric locomotives later replaced the mules.

Coal was moved from the drift mine opening to the headhouse where it was weighed and dumped into a storage bin. 1 6 It was then fed directly into two eight-ton monitor cars through two chutes where it was moved via a double-track incline down to a processing plant at the bottom of the mountain. The system was balanced so that a loaded coal monitor going downhill turned the drum that pulled the empty monitor top the top. Thirty trips per hour could be made on the incline.

Waste slate from the operations was moved to the top of the mountain, Kay Moor Top, and dumped. 1

At the base of the incline, coal was unloaded into a 100-ton capacity storage chute. 1 A feeder distributed the coal onto a horizontal belt conveyor that led into the processing plant, where coal was screened or washed and screened. The process removed impurities from the coal. A wooden tipple stood at the base, which burned in 1924. It was replaced with a metal structure.

From the processing plant, the coal was moved into 120 beehive coke ovens. The circular ovens, built in June 1901, were built of firebrick. 1 Each unit had an opening at the top and an arched door at the bottom. A fire was built within to heat the firebrick and then coal was added from the top via a “larry” car, where the coal was burned for 48 to 72 hours with low oxygen. When it was ready, the bottom door of the oven was opened, the fire watered down and the coke removed into waiting cars.

A wooden fan house and shop at Kay Moor were built circa 1919. 1 It was later destroyed by fire and was replaced with a concrete and brick structure adjacent to the right main drift entry complex. The replacement fans forced fresh air into the mine.

At the start of World War I, the Janurolo Construction Company of nearby Fayetteville constructed an additional 82 beehive coke ovens due to the need for additional capacity. 1

At the base of the mountain were 50 residences that were built in 1901, followed by an additional 45 houses in 1902 and 17 houses in 1905. 1 A suburb, New Camp, was constructed in 1918-19 with an additional 19 to 24 houses. There were few amenities for the residents, with only a pair of segregated schools at Kay Moor Bottom and Kaymoor Top, company stores, a pool hall, and a ball field. The small Azure Theater offered up the latest movies. 6

The four-room houses were simple, measuring 34 feet by 34 feet, and only had the option of a fireplace or stove. 1 The outside finish was board and batten, with some of the 1902 and 1918 houses being covered with weatherboard. The interior was a wood sheath, with only the 1918 houses featuring plastered lathe.

In 1925, the Kaymoor mine was sold to the New River & Pocahontas Consolidated Coal Company, a subsidiary of the Berwind-White Corporation of Philadelphia. 1 6 The company stores from Low Moor were replaced by the Eureka Stores of Berwind and located along the highway at the top of the mountain. 6

After a fire destroyed the wooden tipple, crushing plant, and conveyor in 1924, the new company built a modern steel tipple and coal washing plant with a Simon-Carves Baum Jig Washer, all constructed by the Link-Belt Company of Chicago. 1 6 The new facility could separate coal into four grades before shipment. 6 The Fan House drift opening was also built in 1928 200 feet north of Butcher Branch.

The obsolete coke ovens were closed in 1935. 6 After further modernization, production at Kay Moor jumped to 600,000 tons daily. During World War II, it increased to 700,000 tons daily. But by the early 1950s, the mines began to become exhausted. Kay Moor Bottom and New Camp were abandoned by 1952 and most of the buildings were ruined by fire in April 1960. 1 By 1961, the once prosperous Kay Moor produced just 10,515 tons daily. 6 The inclines continued to operate until 1962 when the mines were closed. They were briefly restarted under the Barbara Gale Coal Company but ceased operations in 1964. 3

Between 1904 and 1940, 21 miners died at Kay Moor, mostly from electrocutions and roof falls. 2 Over the mine’s lifespan, 14 million tons of coal were extracted.

New River Gorge National River, a national park, was established in 1978, and between 1981 and 1982, remnant coal mining equipment and buildings were salvaged along the Sewell Bench. 1 Caustic action of rainwater mixing with remnant coal dust had deteriorated much of the structures that remained. The preparation plant and tipple were dynamited by Dykon Blasting on March 10, 1999, using just 25 pounds of explosives due to the poor structural condition of the buildings. 3 It was left in a ruinous state and fenced, accessible from a rail-to-trail as an interpretative display.

Miners arrived via the mountain haulage inclines who then picked up dynamite at the powder house. 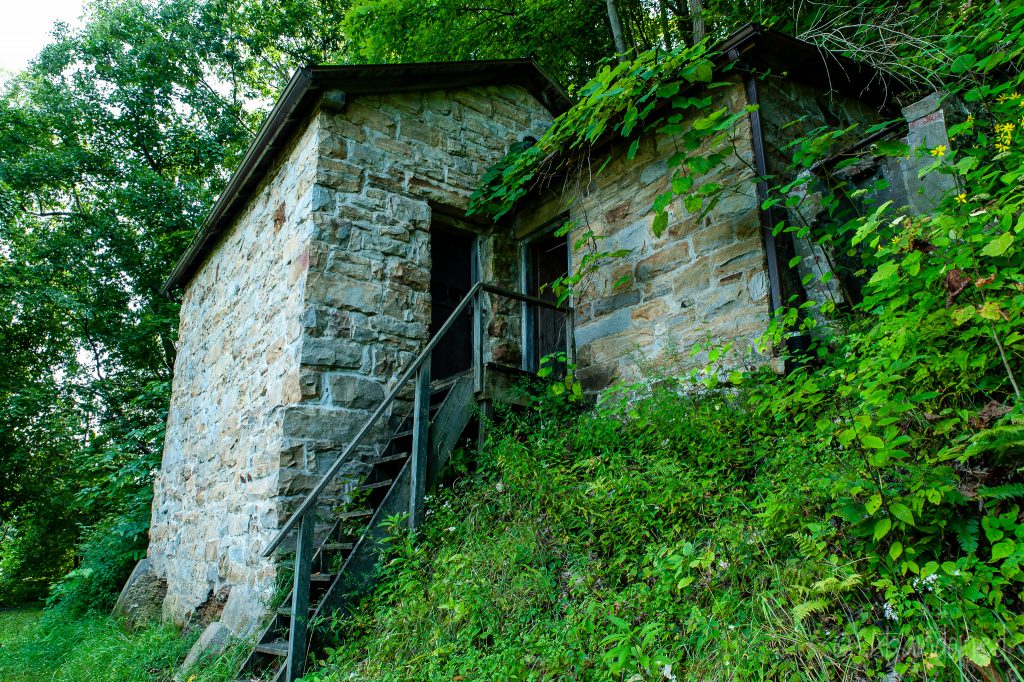 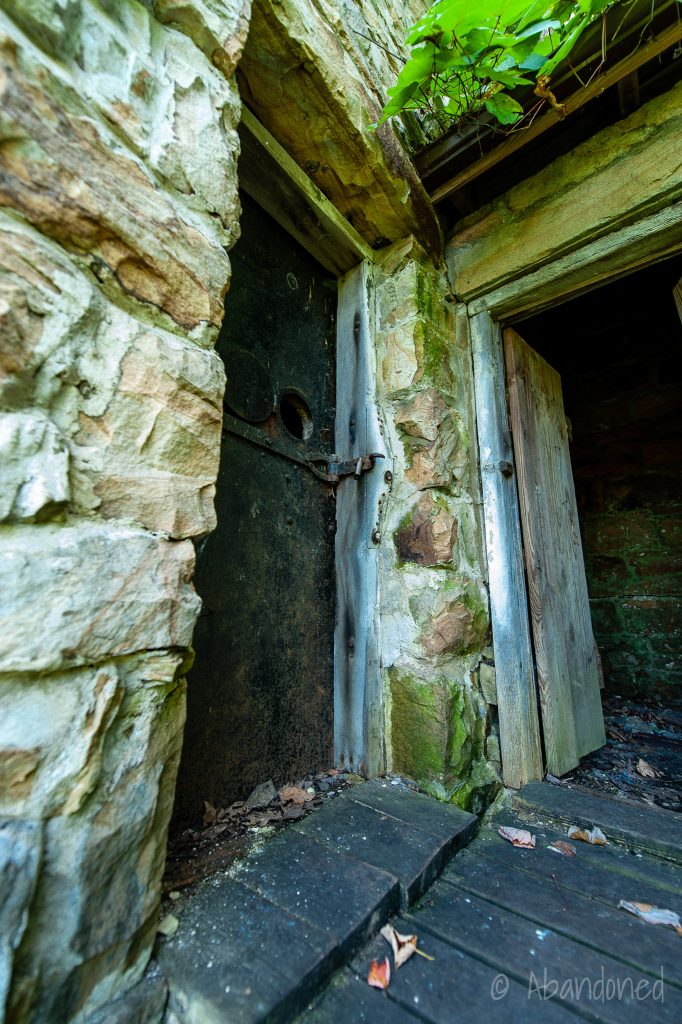 Prior to entering the mine, miners picked up lights at the lamphouse. The lamphouse also housed offices for the mine. 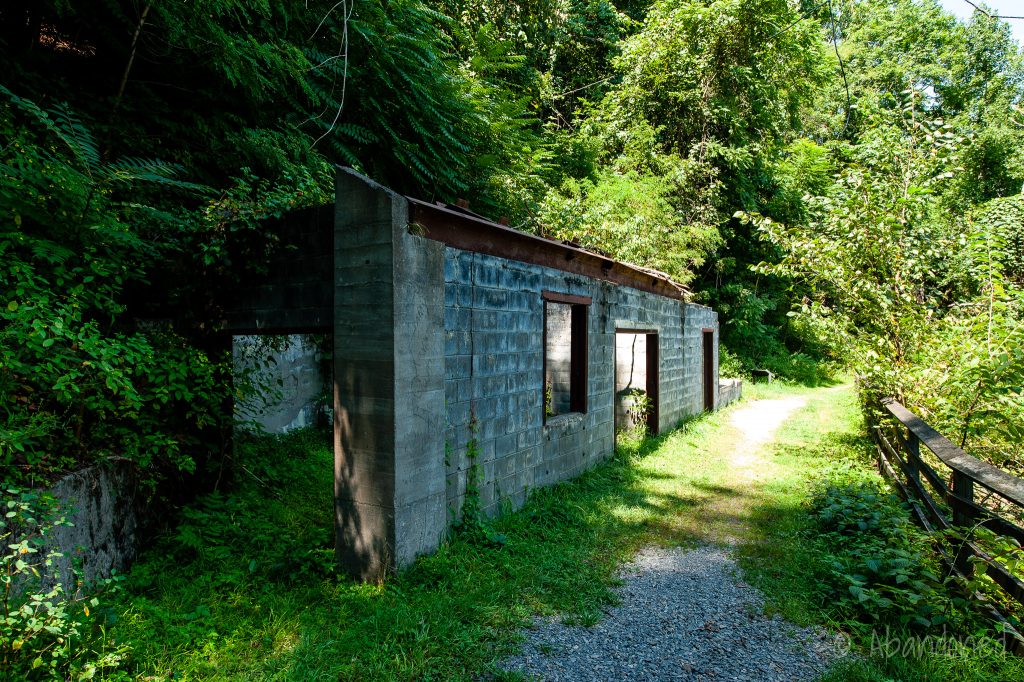 Miners would wait for a locomotive pulling empty cars to carry them into the mine at the locomotive repair exit.

Full cars were hauled out through the main drift opening and unloaded at the headhouse, where the coal would be ferried down the hill. Cars with waste shale were switched to the slate tracks for dumping elsewhere. Cars needed repairing would be sent to the car repair shop. 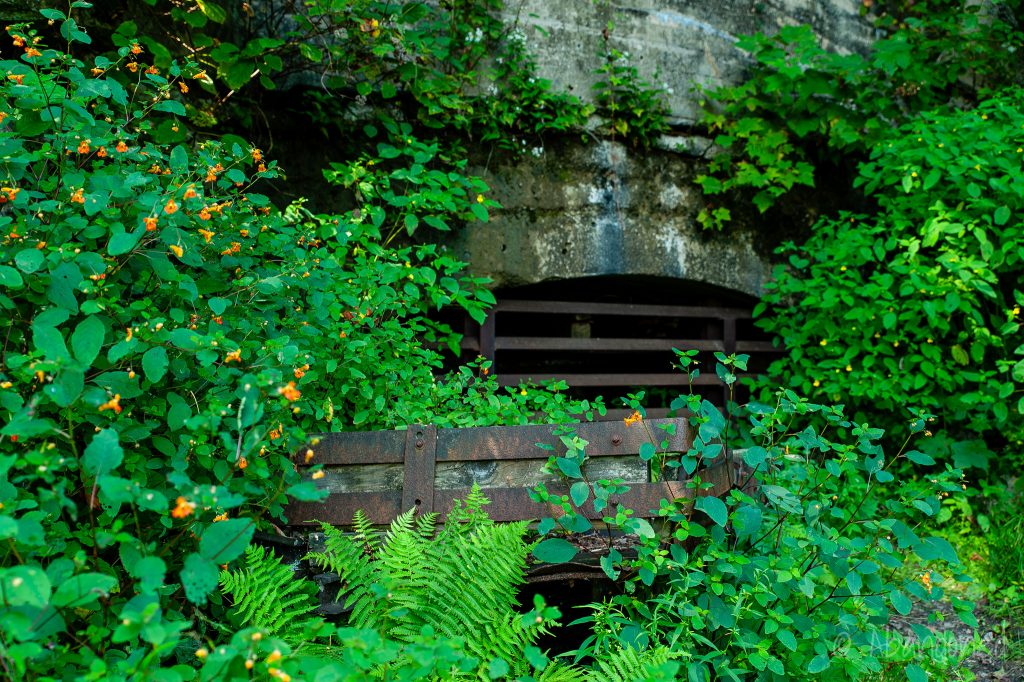 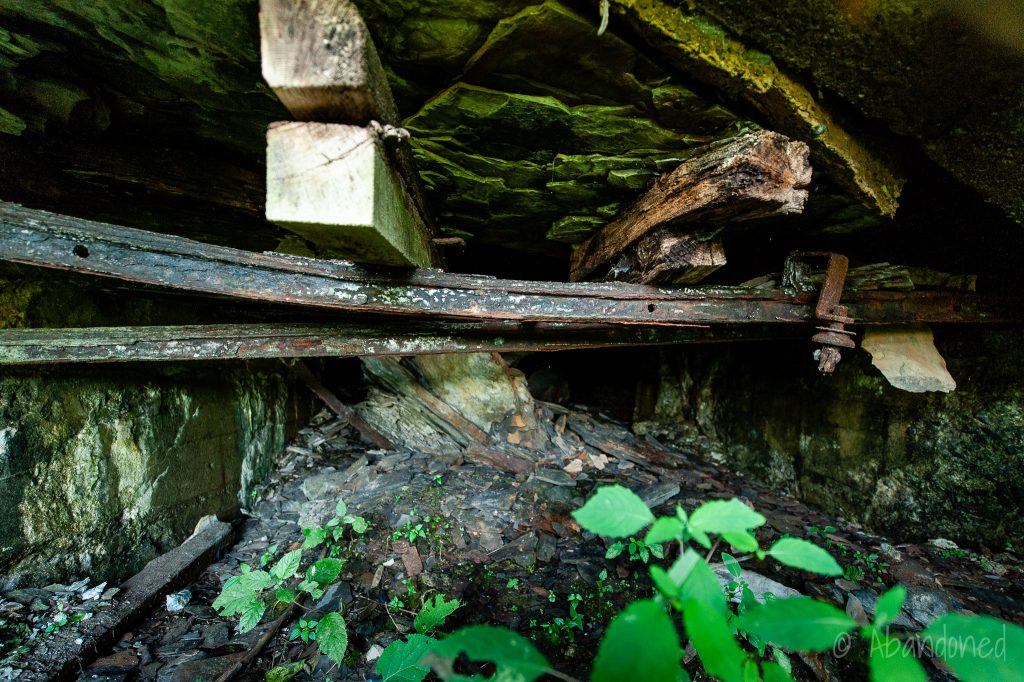 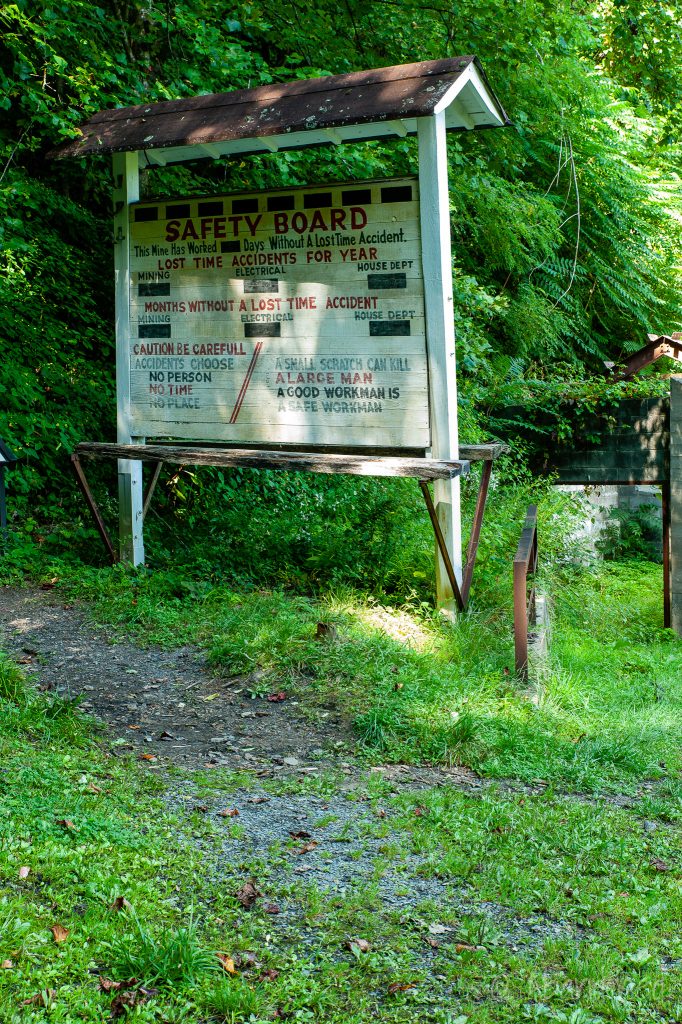 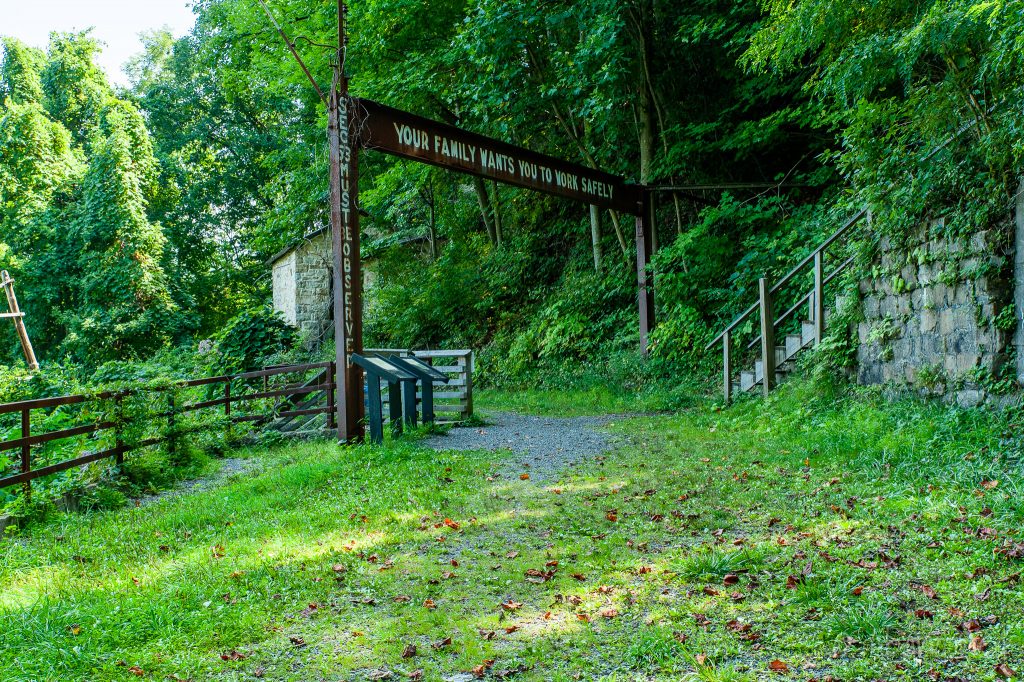 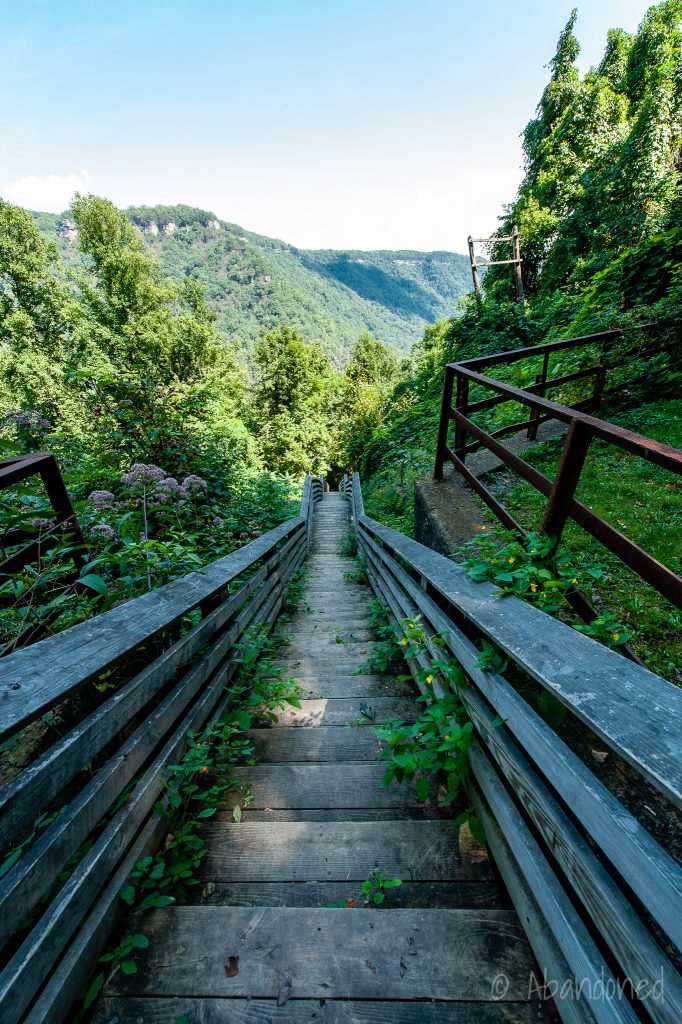