The Atlantic Tank & Barrel Company was established as a wooden tank manufacturer in 1853 in Hoboken, New Jersey. 19 The company expanded to an 8½-acre site on St. Louis Avenue in Louisville in 1898 to construct wooden barrels for the booming whiskey and bourbon industries. 12 17

The Louisville Cooperage Company acquired Atlantic Tank & Barrel on November 17, 1933. 12 It ramped up production with the installation of new machinery and began producing 1,200 barrels per day by December 10. The Louisville Cooperage was acquired by Schenley Distillers in 1959 and operated as a subsidiary, eventually becoming the Lanham Lumber & Dried Kiln Company. 14

Lanham Lumber & Dried Kiln closed in 1986 but the plant was reopened by Louisville Hardwoods 14 in June 1987. 18 It consolidated operations to its factory in southern Indiana by 1999. 17 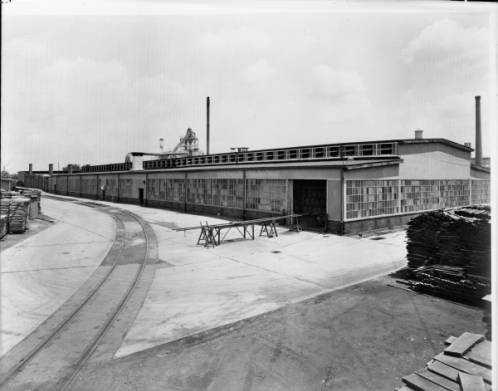 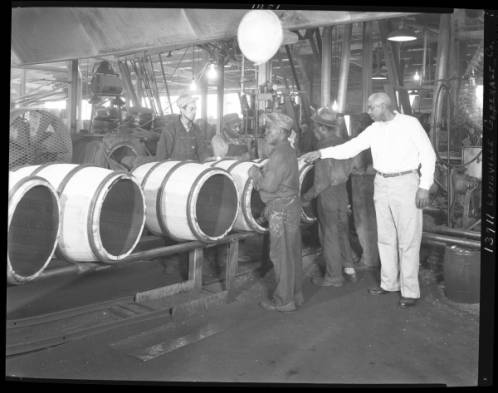 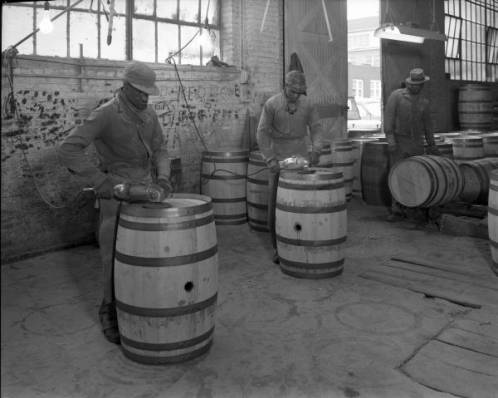 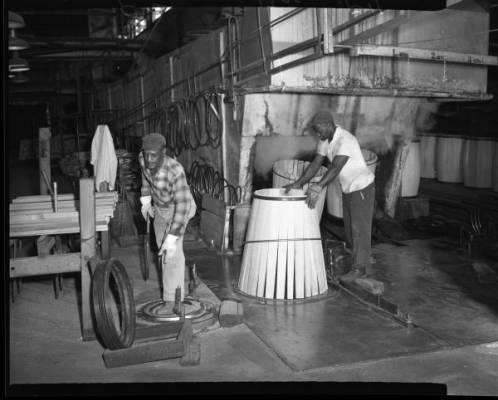 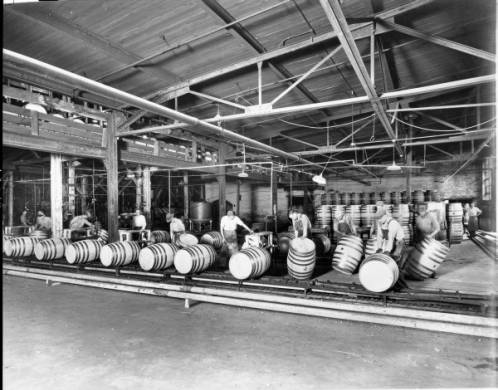 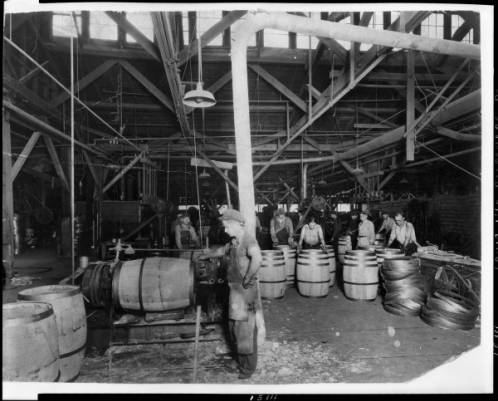 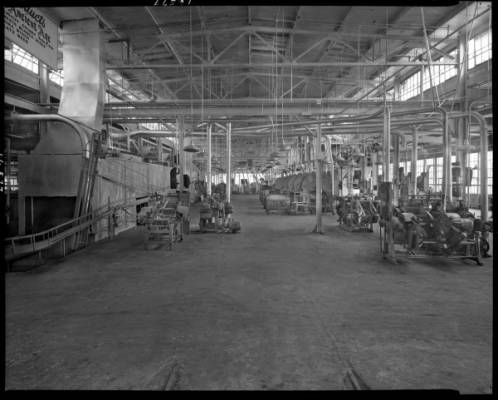 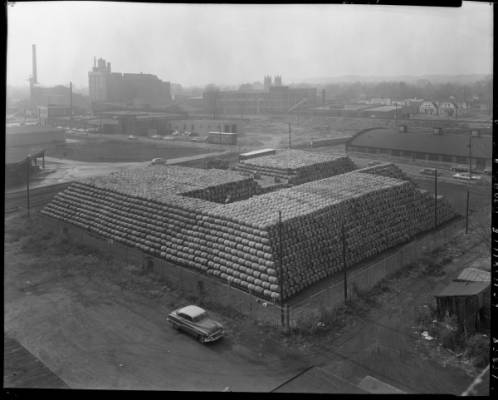 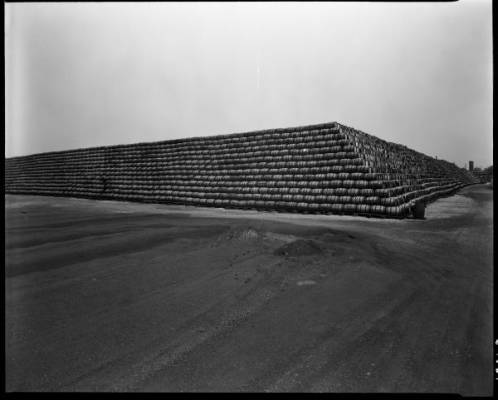 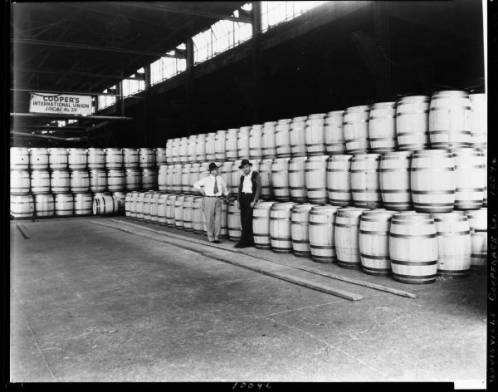 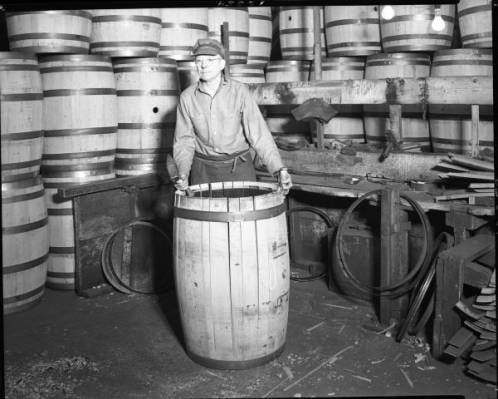 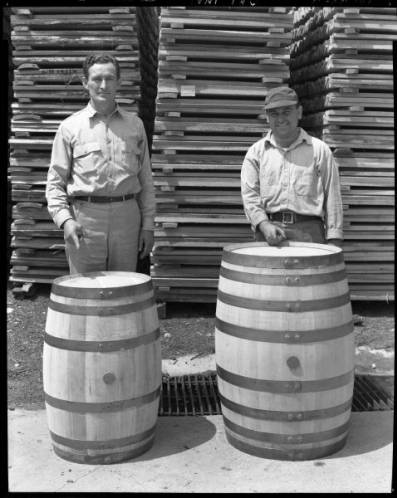 In August 1899, the Continental Tobacco Company acquired the Louisville Spirit Cured Tobacco Company and formed the Kentucky Tobacco Product Company to utilize tobacco stems for the manufacture of fertilizer, insecticide for sheep and cattle, among other products. 15 16 It also produced “dip sauce” that was designed to make weak tobacco taste stronger. 10

While organized on paper in New Jersey, 15 16 Kentucky Tobacco Product was headquartered at the corner of Ninth and York streets in Louisville with a branch factory in Richmond, Virginia. 9 Kentucky Tobacco Product was succeeded by the Tobacco By-Products & Insecticide Corporation before it changed its name to the Tobacco By-Products & Chemical Corporation in October 1919. 11

The Louisville factory suffered from a major fire on April 26, 1924, 7 and it was subsequently rebuilt at a purpose-built site along South 17th Street on the fringes of the city. 1 2 3 The remains of the original facility was demolished in February 1929 as part of the construction of the new $500,000 Sears, Roebuck & Company department store. 9 At the new south Louisville plant, the company formulated Black Leaf 40 spray for flowers, vegetables, and fruit, Gold Leaf tobacco powder for poultry worms, 6 DDT, Dieldrin, and Lindane. 4

The Diamond Alkali Company, the sole stockholder of the Diamond Black Lead Company, acquired ownership of the bankrupt company and continued operations until 1959. 14

Tony Young purchased the former industrial sites for $1.9 million in August 1999 17 and renamed it Louisville Industrial Park. 1 The company spent $100,000 on environmental cleanup. 17 A few small businesses opened on the site, including a lumber warehouse and distribution facility. 1

After the lumber business left in 2006, 1 Young proposed the demolition of the industrial buildings and the construction of low-income housing in its place. 5 Inspectors with the state Division of Waste Management visited the site in 2009 and discovered leaking drums containing hazardous waste buried in the soil. Soil samples taken in 2010 showed high levels of DDT and heavy metal contamination throughout the site. 2 3 5 The state requested the federal Environmental Protection Agency (EPA) for a “time-critical removal action” on the site, and in 2011, the empty industrial park was identified as a federal Superfund cleanup site.

A site characterization study in 2015 stated that the site contained dangerous pollutants at hundreds to thousands of times higher than safe limits, and it proposed the excavation of 4,578 cubic yards of contaminated soil at 16 locations and the cleaning of catch basins and sewer lines to remove contaminated sediment. 3 ExxonMobil, Occidental Chemical Corporation, and Grief Inc., all stakeholders in the cleanup through various mergers or acquisitions over the years, proposed the demolition of all 14 remaining buildings, the removal of concrete slabs and soil down to six inches below the surface, and the inclusion of a deed limitation stipulating that the property could only be used for industrial or commercial businesses. 1 3

The industrial park became derelict as Young fell behind in mortgage payments and taxes and the property fell into foreclosure in May 2017. 2 Young sued his bank, a bank holding company, and ExxonMobil, claiming that the businesses entered into a secret deal to buy the properties in a process that would wipe away the liabilities for a new owner and allow for the lenient remediation of the property. 2 Young proposed stricter cleanup standards for his proposed residential development but offered no detailed plans other than piling contaminated soils in berms and entombing them in asphalt or concrete at an undisclosed cost.

State officials saw the foreclosure sale as potentially removing a legal jam by getting the property into the hands of a business with financial backing to bring economic development to the site, and to remove the abandonment. 2 Following the resolution of property ownership questions and foreclosure proceedings against the former owner, the state began cleanup and demolition of the remaining buildings at the industrial park in May 2018. 20 The state reached a tentative agreement to collect $1.25 million from ExxonMobil, Occidental, and Grief and $1.6 million from the same companies to cover the expenses of removing contaminated dirt from neighboring homes. 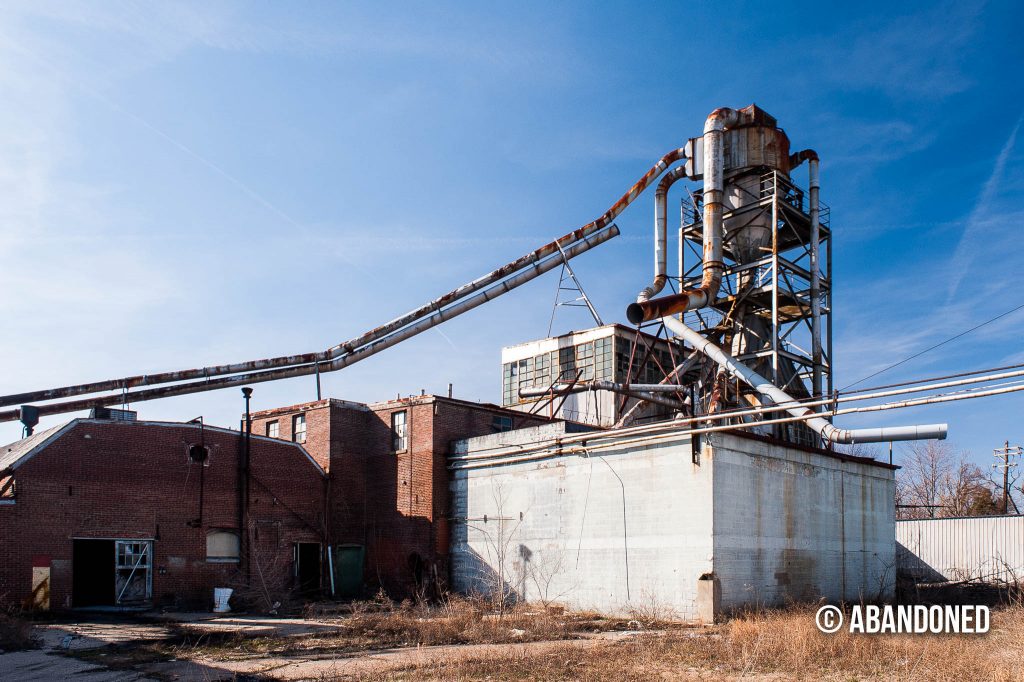 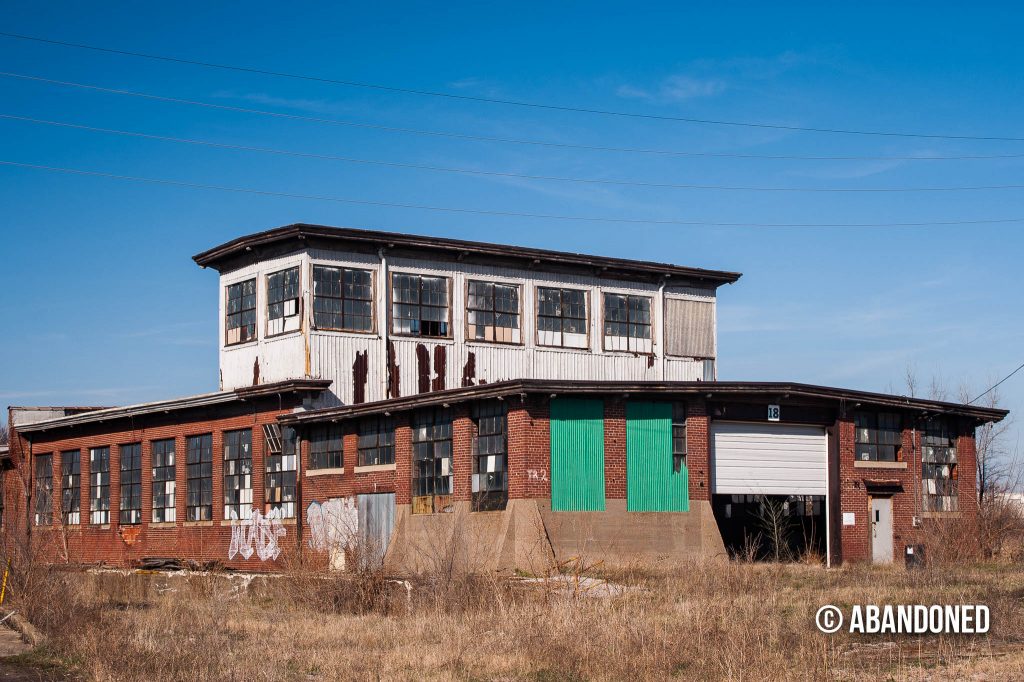 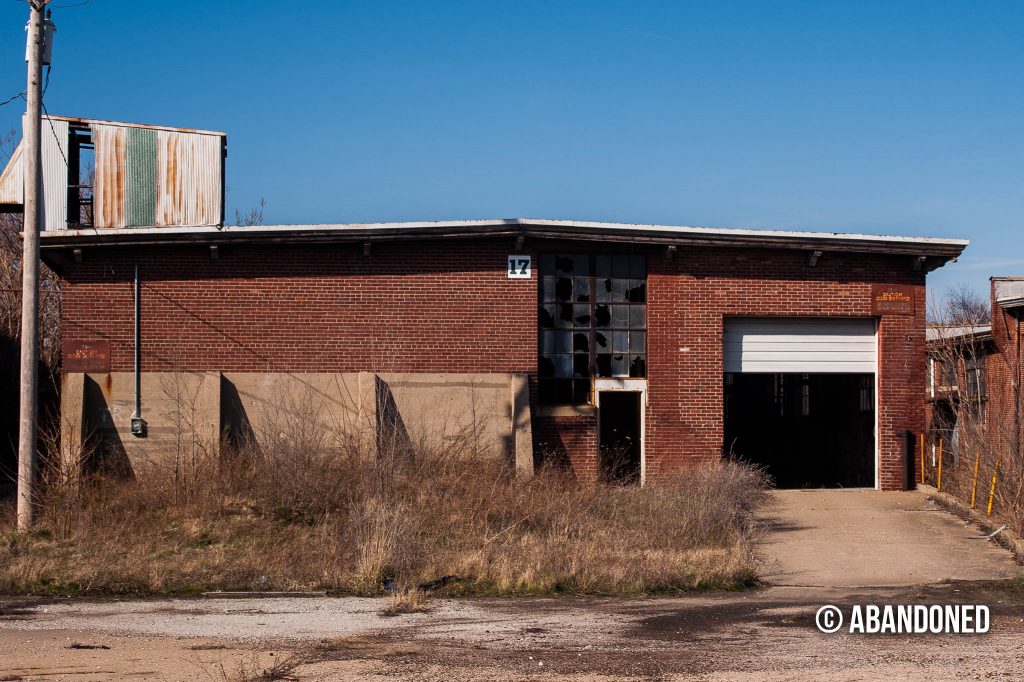 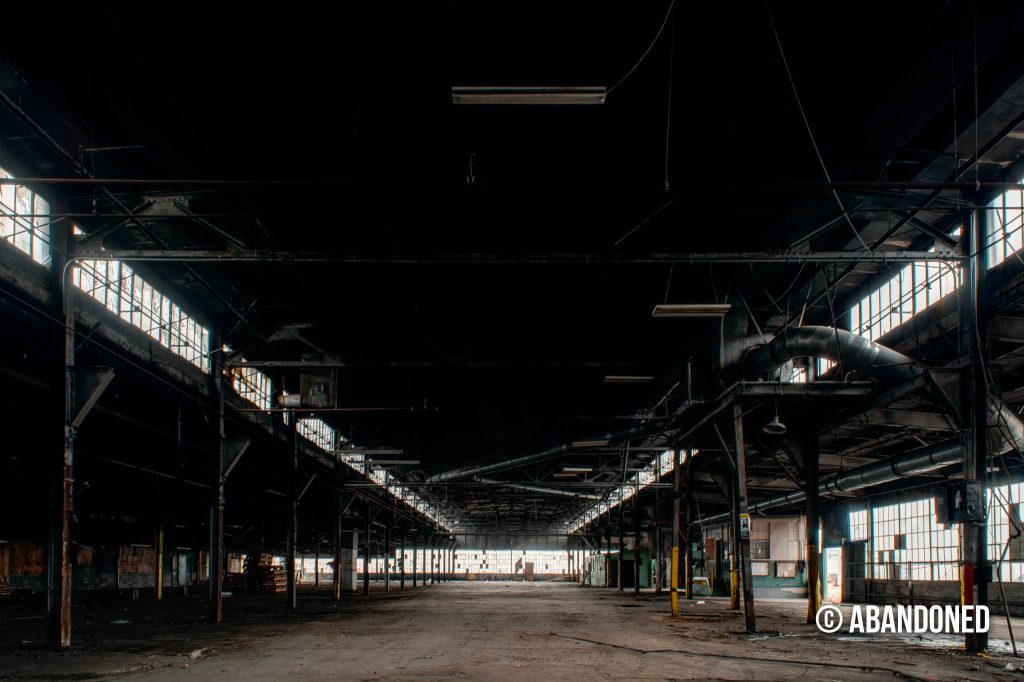 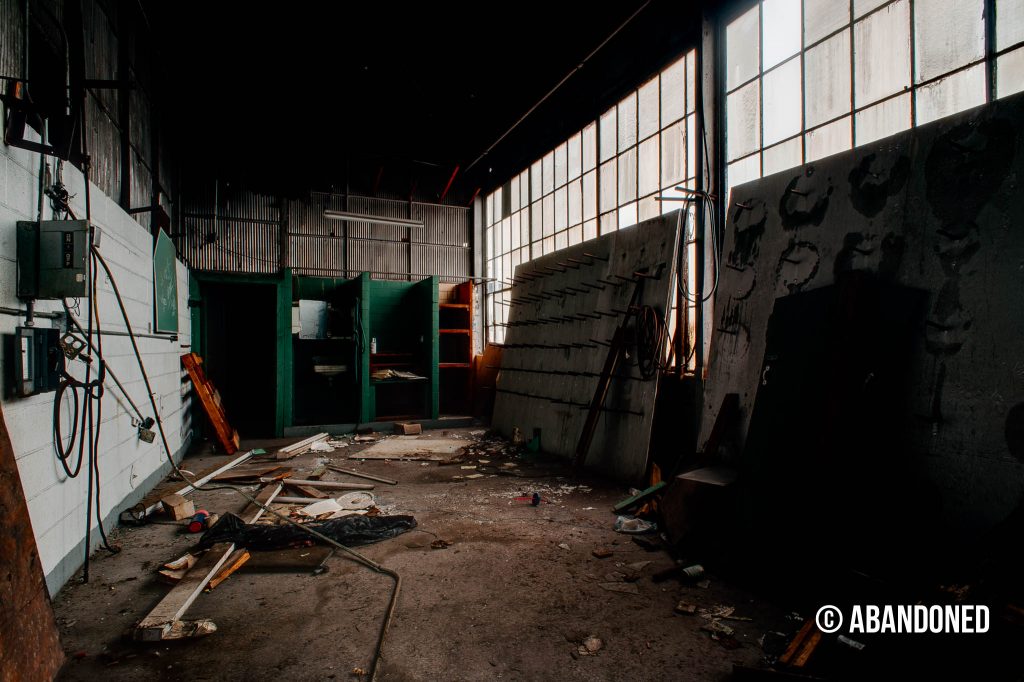 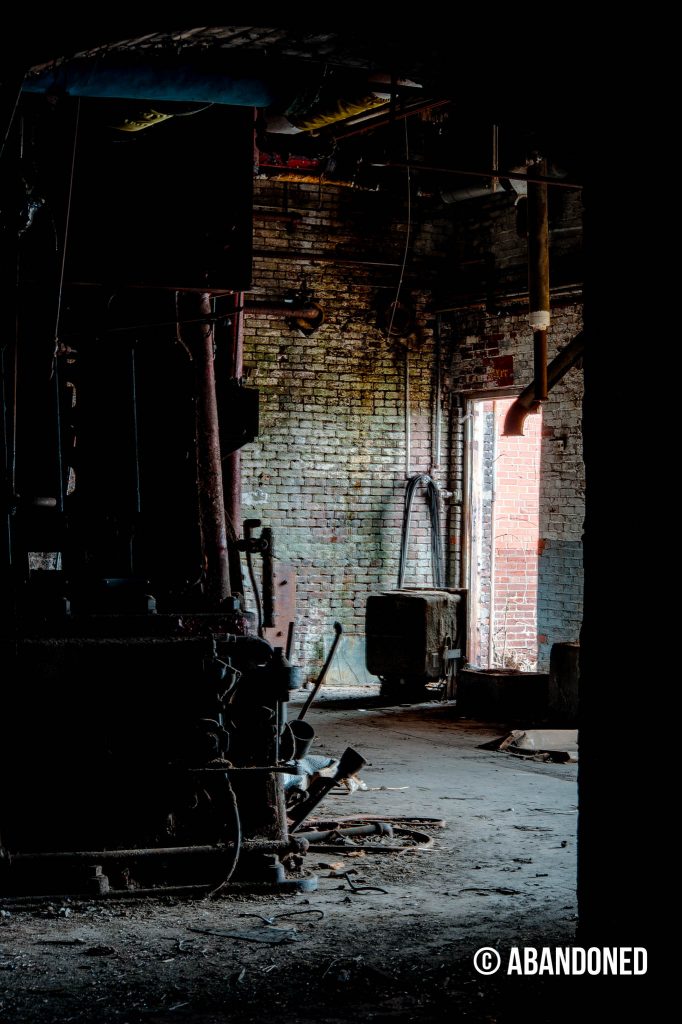 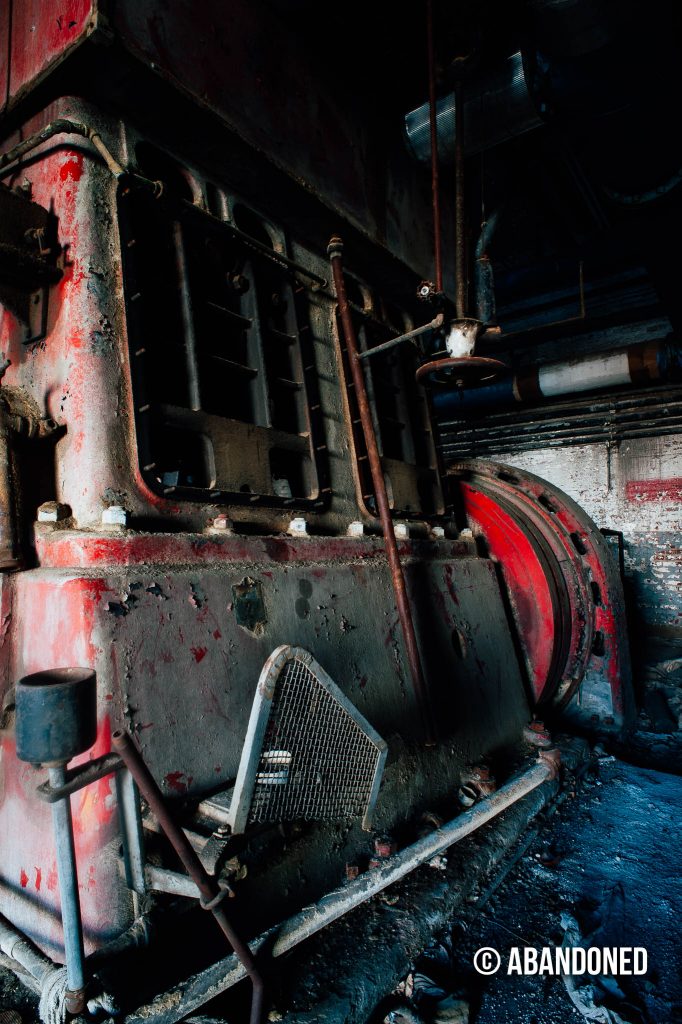 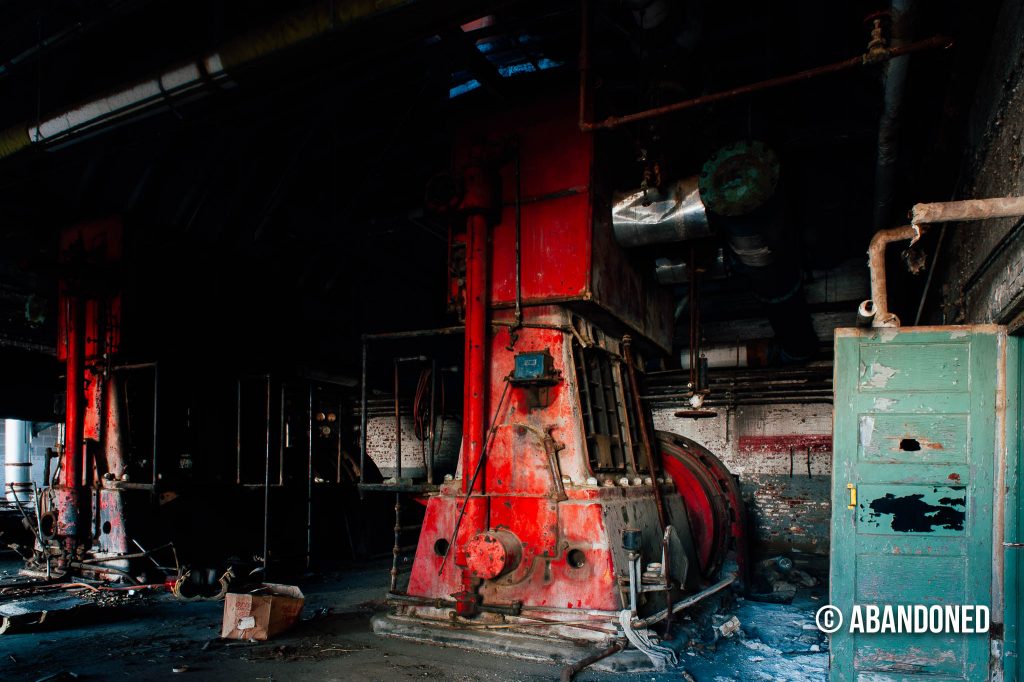 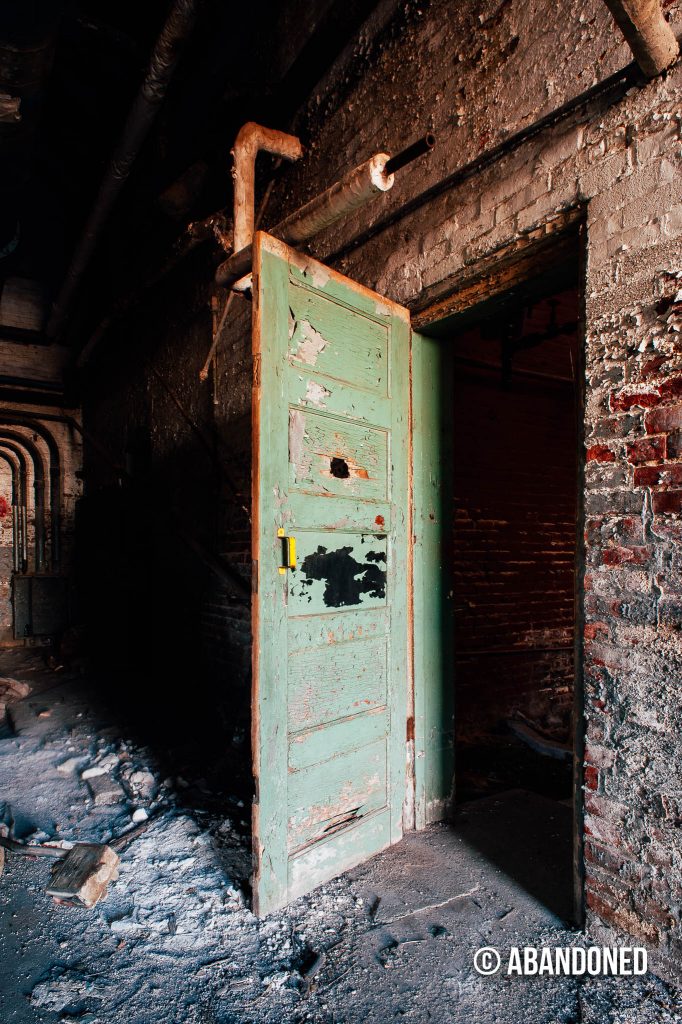 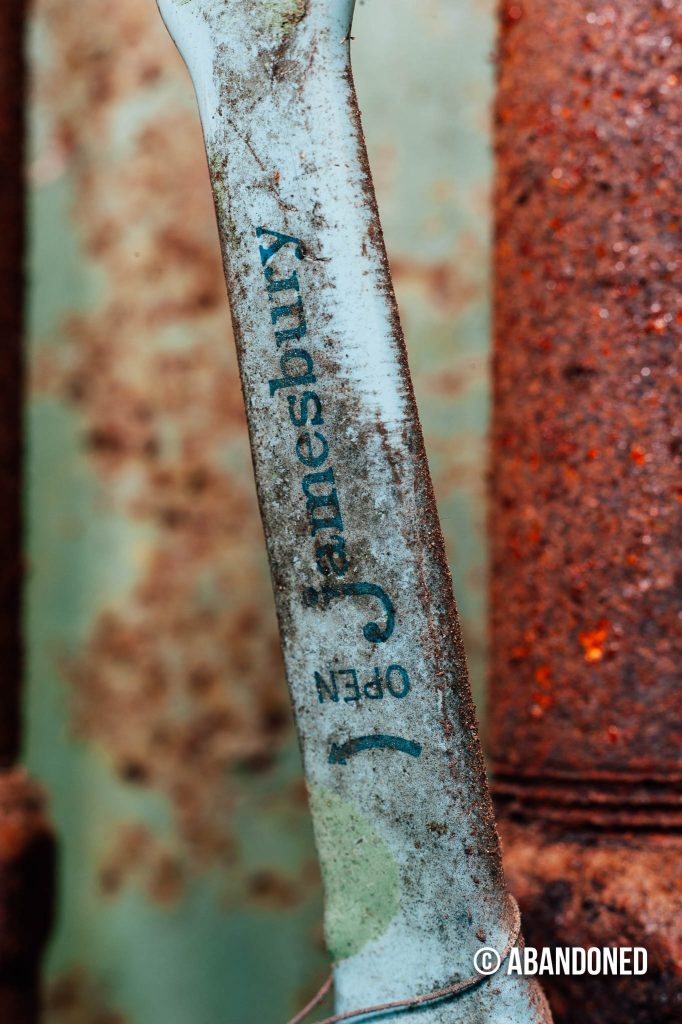 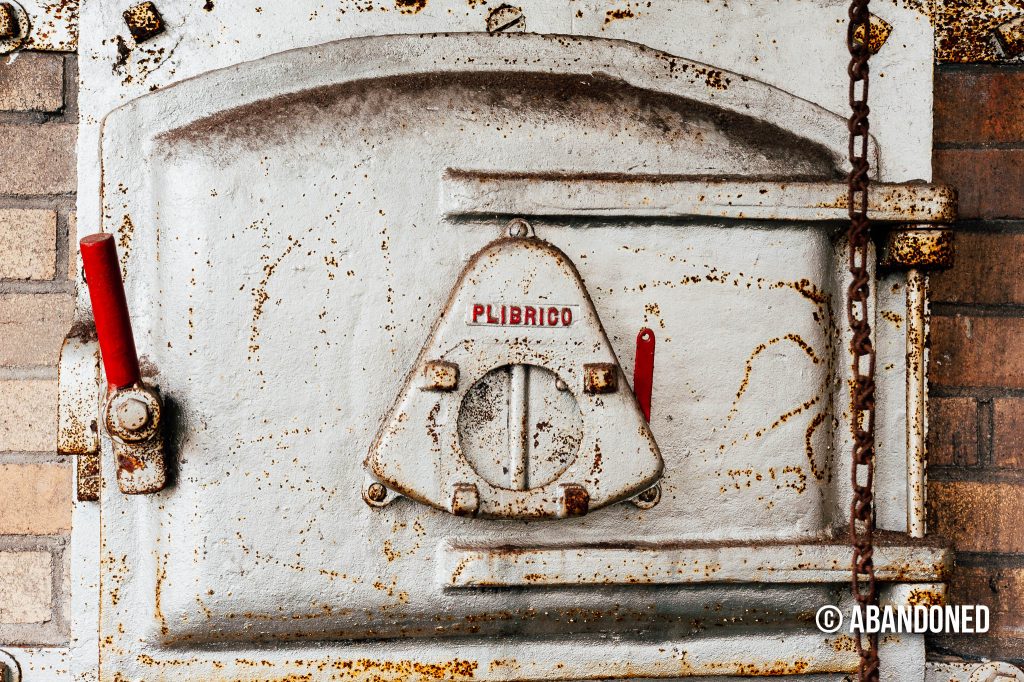 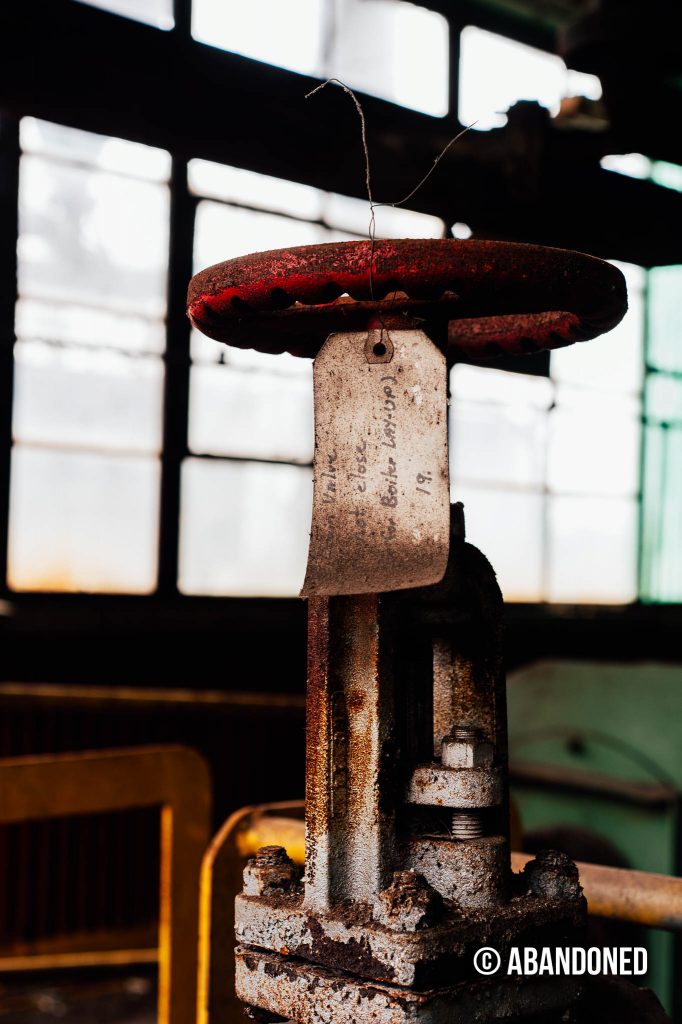 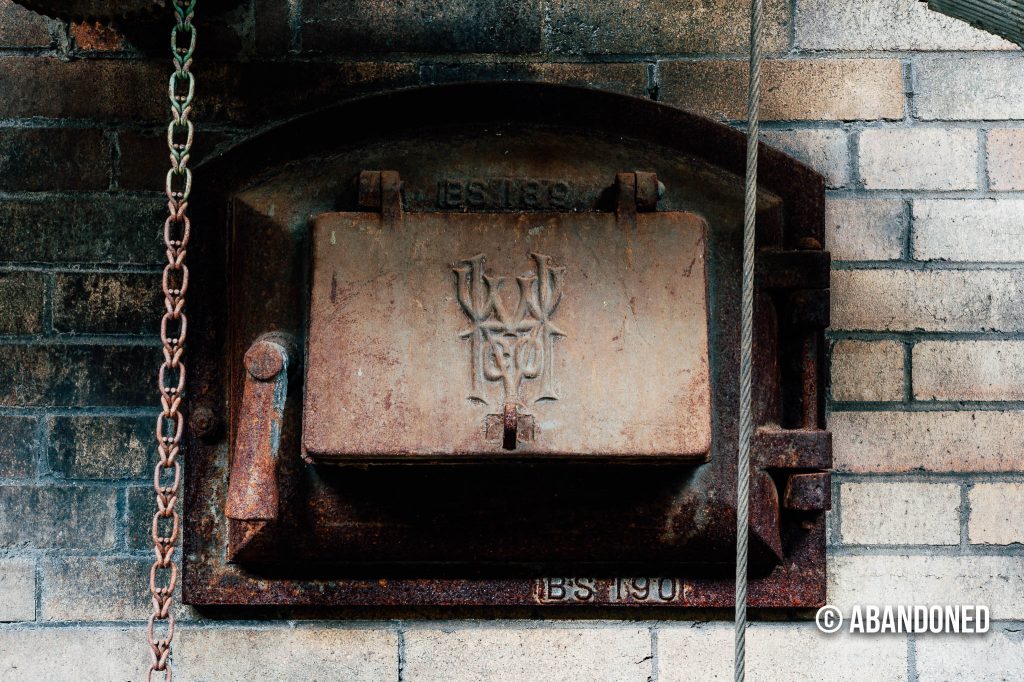 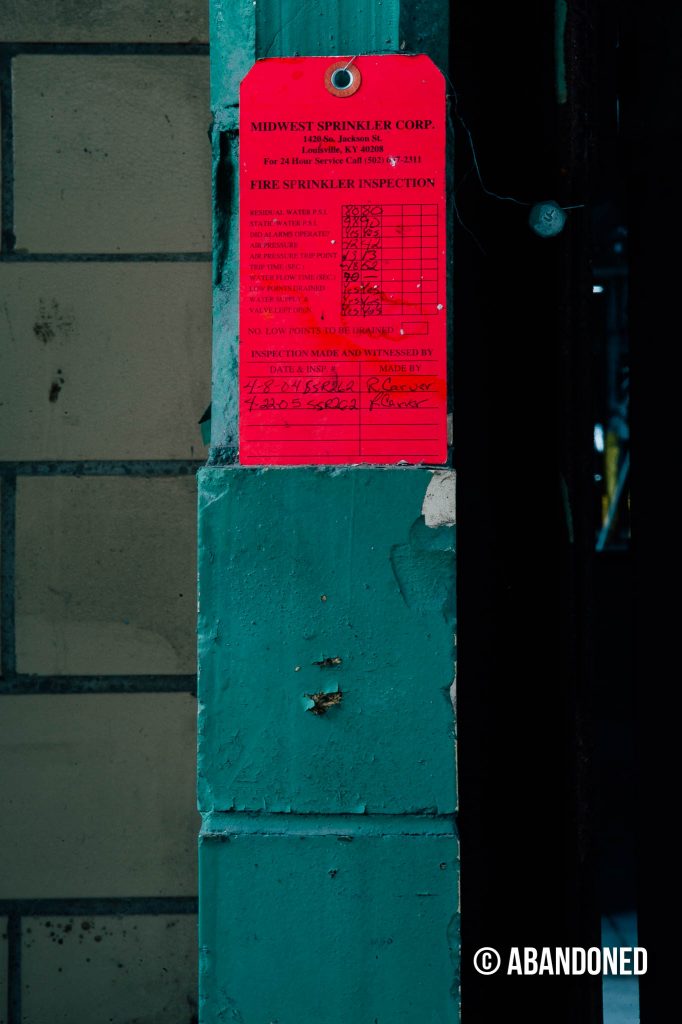 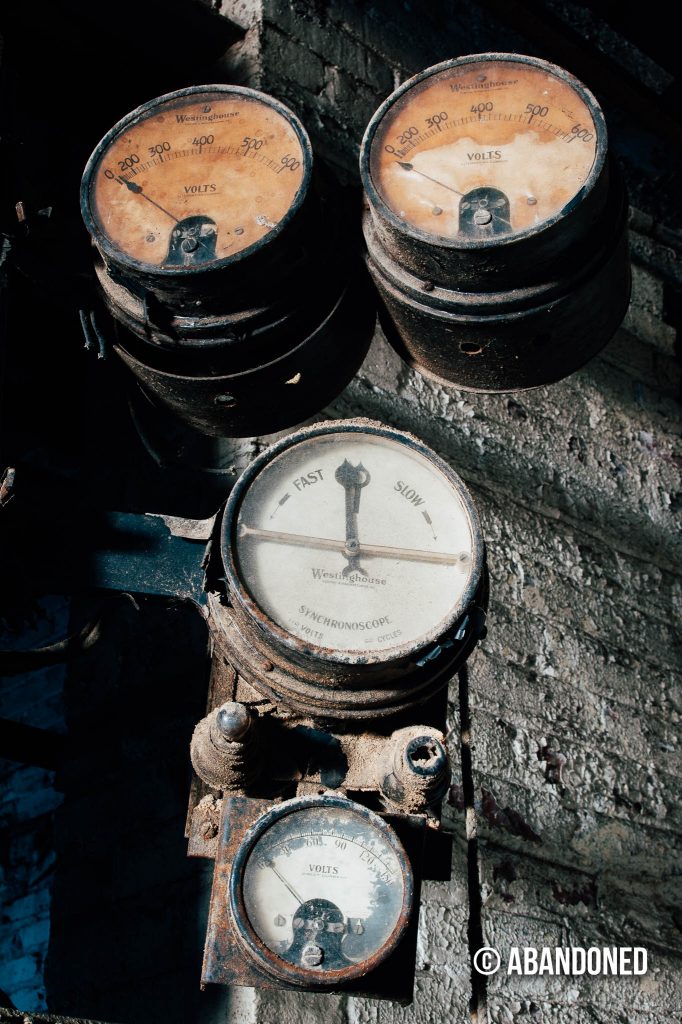 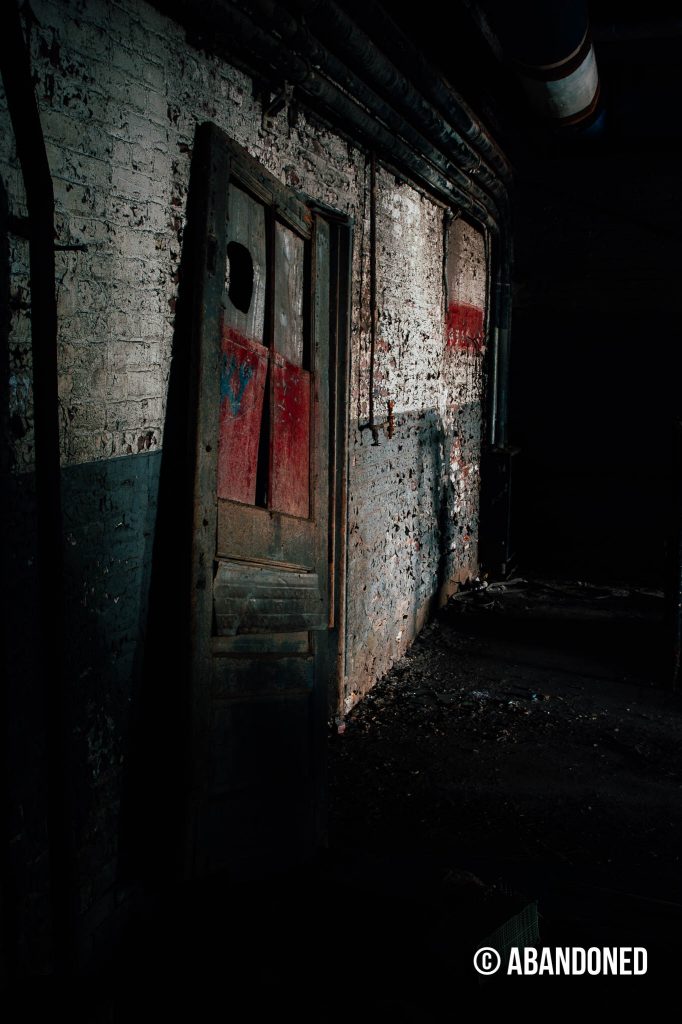 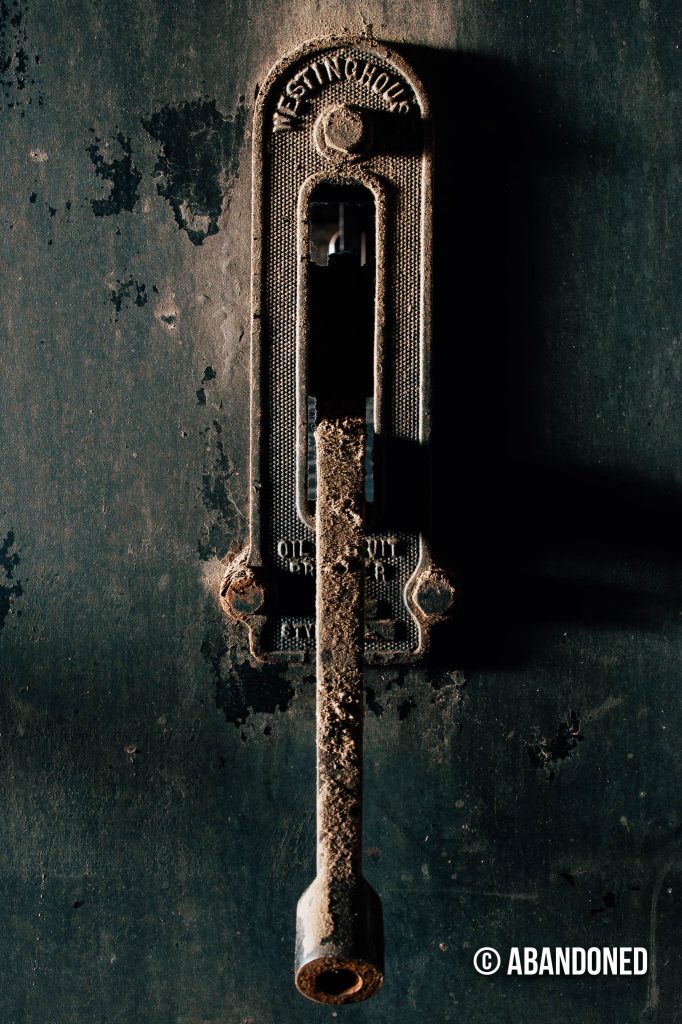