The lots at Lisbon and Evins Street in Cleveland, Ohio included the Cleveland Rubber Company, the Glidden Varnish Company that grew to become one of the largest paint producers in America, the Gerson-Stewart Corporation, which produced cleaning compounds and sanitation chemicals, and the Strong, Cobb & Company that had become the largest custom formulator of pharmaceuticals in the nation. The property was also home to the Ohio Confection Company and the Pennsylvania Refining Company.

The Cleveland Rubber Company was founded in 1872 at Ellsworth and Lundy Streets, 2 3 and formally incorporated in 1877 with a capital of $650,000. 3 By 1892, the company employed 500, producing rubber elevator and drive belts, such as their “2-X-L” that measured 226-feet-long and 60-inches-wide, hoses, leather matting, rubber covered rolls, wringer rolls, horse covers, rubber blankets, printer blankets, tubing, rubber clothing, and fruit jar rings. Cleveland Rubber became the Mechanical Rubber Company on February 15, 1893. 1

The Sawyer Belting Company, a manufacturer of oil clothing, was formed in Cambridge, Massachusetts in 1892 by H. M. Sawyer. 37 The company’s brand, Sawyer Oil Clothing, was well regarded and led to the development of canvas stitched belting. In its early years, Sawyer Belting produced 600 feet of belting per day. The company relocated to a new, larger factory on Lisbon Street in Cleveland on January 1, 1906, which allowed the company to churn out six miles of belt per day.

The United States Rubber Company is today known as Uniroyal and is a part of the Michelin Group.

The Glidden Varnish Company was founded by Francis Harrington Glidden in Cleveland. 29 Glidden soon took on Levi Brackett as a partner with the company becoming the Glidden, Brackett & Company. The company produced 1,000 gallons of varnish per week that were delivered by horse and wagon 27 to its primary clientele, streetcars, and railcars.

The introduction of Jap-A-Lac in 1895 greatly expanded Glidden’s market. 27 The color varnish was introduced for the consumer market and became one of the best-known varnish brands by the early 20th century. Due to the rapid growth of the company, and the inability to expand its physical plant on Lisbon Road, it was decided to construct a new factory. 32 The company purchased a 20-acre tract at its Madison and Berea site and plotted the construction of a new 25 building complex, with all work to be conducted by the Hunkin Bros. Company. Erection of the new complex began in June 1906.

A fire on February 15 destroyed the main building at the Lisbon Road factory, 31 followed by a larger fire on October 26, 1907, that destroyed much of the Lisbon Road operations. 30 A lantern, carried by a workman, was dropped next to a bank of benzine causing an explosion that injured the workman and allowed the oil to leak out and cause the fire to quickly spread.

The new Madison and Berea plant opened in 1909, and the remains of the Lisbon Road plant were closed. 33 34

Francis Glidden retired in 1917 and sold Glidden Varnish to Adrian Joyce in 1917, who renamed the company to the Glidden Company. 29 Joyce greatly expanded the company’s offerings by acquiring 11 paint manufacturers and distributors and then expanding into vegetable oil processing. By the late 1930s, Glidden had become one of the largest soybean processors in the nation, using the refined oil in the production of paint, linoleum, and margarine, and the flour and proteins of the soybeans in the production of plastics, synthetic resins, and paper coatings. 27

The Madison and Berea location remained in use until June 1976 when it was closed for more modern facilities. 33

The Peerless Motor Car Company was established in 1889 as the Peerless Wringer & Manufacturing Company and was located at the junction of the Cleveland & Pittsburgh and New York, Chicago & St. Louis railroads. 36 By 1892, the company was known as Peerless Manufacturing and produced washing machine wringers. It moved to 2654 Lisbon Street in 1895 and began creating bicycles. It entered the automobile market in 1901 by producing De Dion-Bouton vehicles under license from the French company and was renamed the Peerless Motor Car Company in 1903. Peerless became known for its luxurious automobiles alongside the Packard and Pierce-Arrow.

Peerless announced that it had purchased 5½ acres of land at 9400 Quincy Avenue (then Oakdale Street) on October 15, 1904, and had already started construction of a machine shop. It was followed with a foundry, an erecting shop, and a painting and upholstering shop, 35 all designed by J. Milton Dyer. 36 The new Peerless plant opened in 1906.36

But its conservatively-styled vehicles and its long lag time between new car introductions led its sales to stagnate in the 1920s, and the Great Depression did not help matters. 36 Just as a new vehicle design was set to be unveiled in 1931, the Board of Directors opted to pull Peerless out of the automobile industry. The company then reused the former Peerless plant to bottle beer under the Carling Brewing Company starting in 1933.

The Gerson-Stewart Corporation was founded in 1914 6 on Prospect Avenue, and gradually expanded and grew into space at East 76th Street and the Wheeling & Lake Erie Railroad. 7 In 1932, the company purchased the Cleveland Soap Company, and then signed a lease for 17,000 square-feet at the United States Rubber location on March 23, 1933. The space, which doubled the size of its old factory, was needed to consolidate the Cleveland Soap operations into Gerson-Stewart. The firm by 1958 had sales of $1.3 million and boasted 100,000 square-feet of research and manufacturing space, 6 producing cleaning compounds, sanitation chemicals, and floor preservatives. 4

Gerson-Stewart was purchased by Lewis R. Schilling on November 19, 1958, 6 which was then acquired by U.S. Borax in 1964 10 so that Borax could expand its Boraxo and Luron hand soap business into the broader field of industrial and janitorial maintenance supplies. 9 The Cleveland location was closed on January 31, 1966. 8

The Strong, Cobb & Company was founded in 1833 12 14 as Henderson & Punderson, a retail drug store on Superior Avenue near West 6th Street. 14 In 1858, S.M. Strong and A.C. Strong acquired the store and established a wholesale department that became one of the leading suppliers to retail drug outlets in Ohio, western Pennsylvania, New York, Indian, and Kentucky.

Its first private formula was Dr. Strong’s Fever Destroyer which was produced for Dr. Samuel Strong of Elyria. 14 15 The Armstrong interests were sold to Ahira Cobb in 1870, and the firm was renamed Strong, Cobb & Company. By 1888, the pharmaceutical production section of the firm became so great that it was established in a separate laboratory. 14 It began to specialize in creating private formulas in 1912 and ultimately exited the wholesale business in 1918 when it sold that department to the Hall, Van Gorder Company, which later became part of McKessons & Robbins, Inc. in 1920. The retailing operations were sold in 1920 to a local druggist.

Strong, Cobb & Company was one of the largest private formula houses in the United States by 1942 and manufactured vitamin and other pills and tablets at a rate of 60 million to 85 million per month, 15,000 gallons to 20,000 gallons of liquids per month, and 25 million to 35 million pounds of ointments per month. 14 Its biggest seller was Cet-ets, a sugar-coated vitamin capsule; the sugar eliminated the burp commonly associated with the fishy taste of other vitamins.

In the early 1950s, Strong, Cobb & Company acquired the American Chlorophyll Corporation, 16 which produced a food additive that appeared in chewing gum and breath mints that reportedly removed bad breath odors. 17 After reports concluded that chlorophyll had no demonstrable effect on minimizing breath odors, sales quickly faded from their peak of $12 million in 1952. 16

Suffering from years of losses after the report debuted, Strong, Cobb announced a merger with the Arner Company on May 11, 1959. The new, combined company, Strong, Cobb, Arner (SCA), was expected to have combined annual sales of $20 million. 16 By 1965, SCA had become the largest custom formulator of pharmaceuticals in the United States. 18

In June, SCA announced that it was merging with Foremost Dairies 18 for more than $15 million in cash. Foremost placed SCA under the trusteeship of Crocker-Citizens National Bank in San Francisco in January 1966, in part to avoid possible antitrust charges when Foremost was acquiring shares of McKesson & Robbins, another pharmaceutical company. 19 But on February 3, 1967, the Federal Trade Commission (FTC) issued an order that required Foremost to sell SCA as part of an arrangement by which Foremost was permanently barred to acquire without FTC approval of any pharmaceutical or drug wholesaler other than McKesson & Robbins. SCA was sold to International Chemical & Nuclear Corporation on November 13, 19 which was finalized on December 1. 21

In 1970, SCA announced plans for a new $6 million research and manufacturing plant on Enterprise Parkway in a Twinsburg industrial park, although that facility was never constructed because of problems with the town’s planning commission. 21 After not locating a suitable industrial site for its operations in the Cleveland area, SCA looked at possible locations in Puerto Rico and several southern states before deciding on a former RCA transistor and tube plant that it acquired for $17 million in Cincinnati, Ohio on August 4, 1972.

The Ohio Confection Company relocated from a smaller Grand Avenue factory to a vacant five-story building at 6110 Grand Avenue/8602 Evins Avenue on August 17, 1934. 23

In 1976, the Penreco Division of Pennzoil Company leased the former SCA complex and spent more than $100,000 in remodeling for expansion of its product lines and warehousing, 22 but on May 31, 1978, Pennzoil announced that the Cleveland facility would close on June 9 after a labor strike had failed to come to any reasonable conclusion. 26

Portions of the property were used by U.S. Consolidated in the 1970s. The Gerson Stewart lots were used by Ramsey Laboratories from the 1980s until 1995. By 2018, much of the industrial aging and polluted complex was demolished. 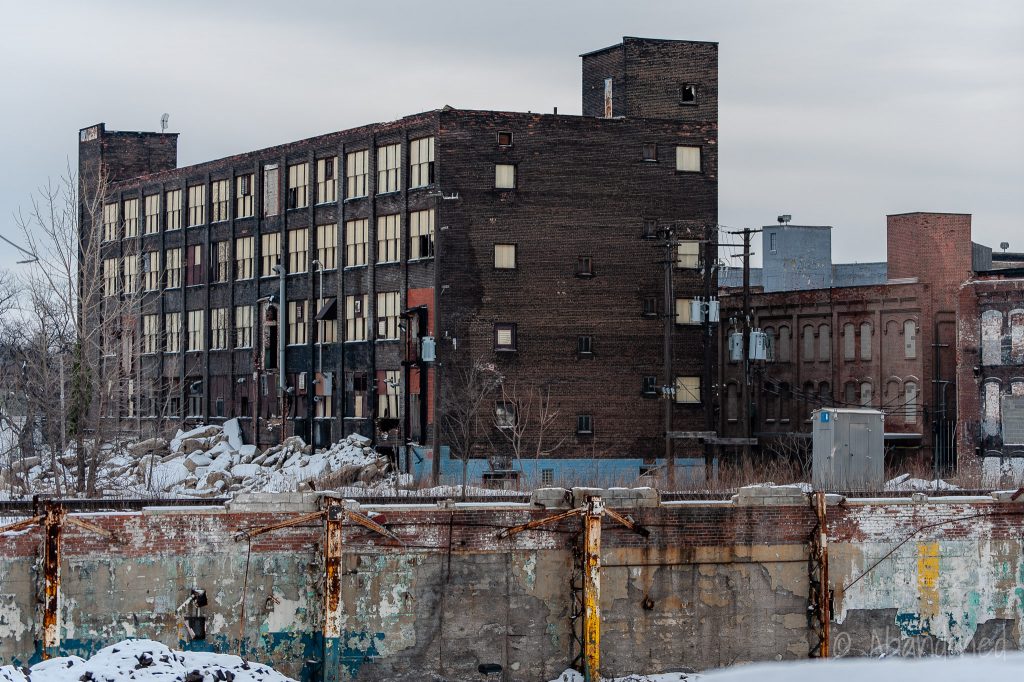 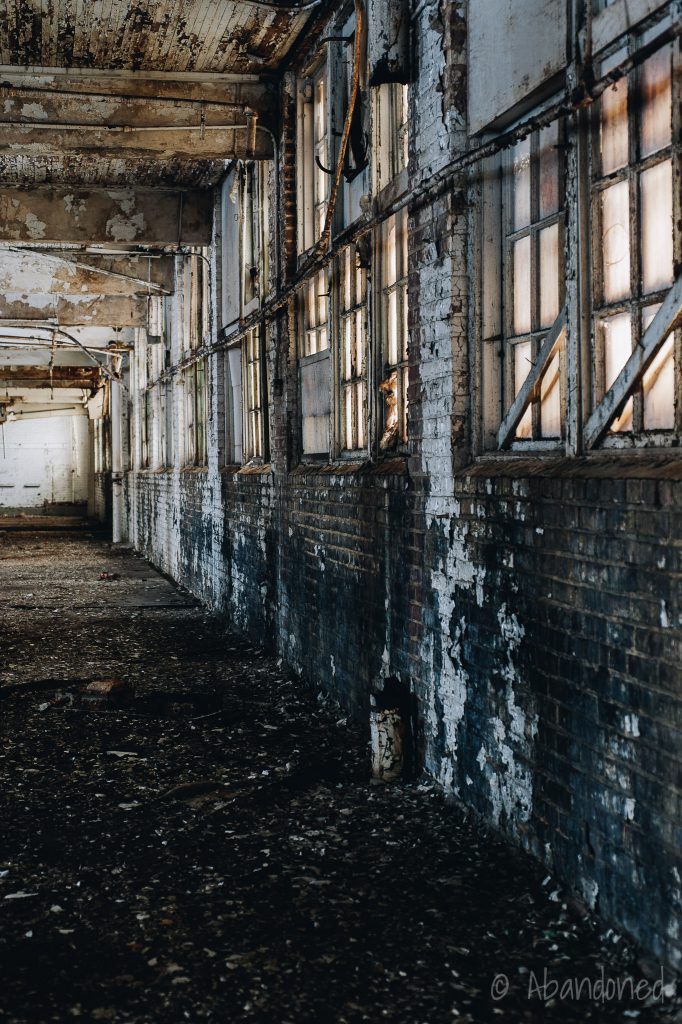 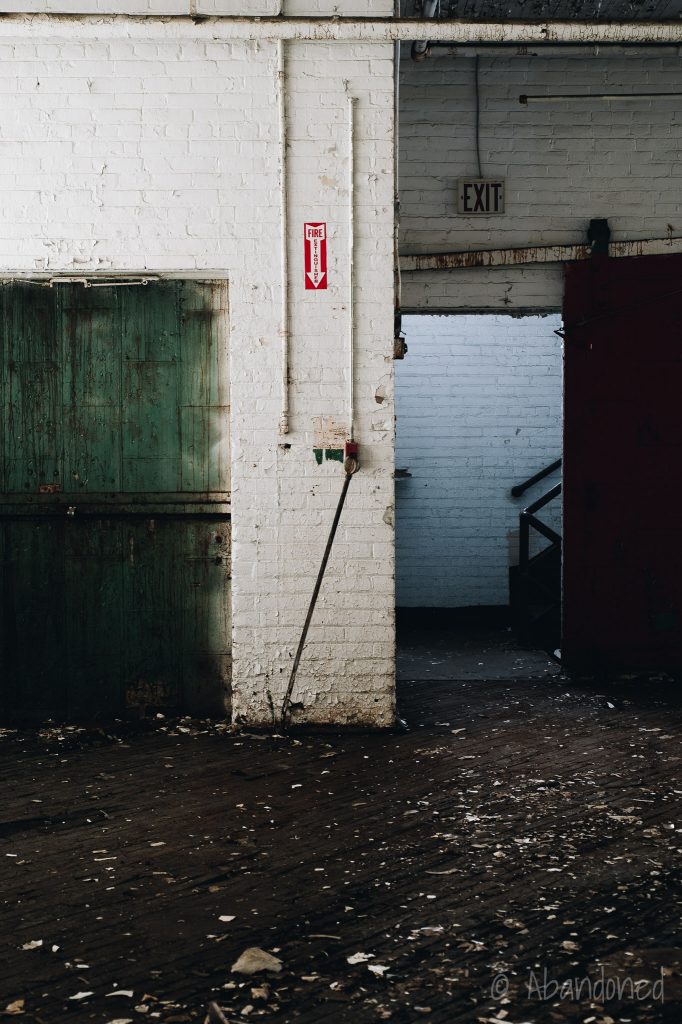 Update 1 (September 2): I've added photographs of the abandoned Chesapeake & Ohio Portsmouth Gaseous Diffusion Plant Spur at the bottom. There is something fascinating with exploring abandoned …
END_OF_DOCUMENT_TOKEN_TO_BE_REPLACED
Category ExplorationsPosted on October 1, 2020

The Essex County Home and Farm

Railroads of the Upper Peninsula

While on an expedition to the upper peninsula of Michigan, namely to Pictured Rocks National Lakeshore, I stumbled across two abandoned railroads.…
END_OF_DOCUMENT_TOKEN_TO_BE_REPLACED