Early growth in Brownsville centered around the large volume of traffic that passed through on the National Road. 1 Owing to a lack of ample flat land, steel mills and other large industries bypassed the region for Pittsburgh. It was not until the depletion of the high-grade Connelsville coal fields in the early 1900’s that the city began to see its fortunes rise.

The Pennsylvania and Pittsburgh & Lake Erie railroads formed the Monongahela Railway in 1903 to access the Klondike coalfield near Brownsville. 1 The city became the terminal point of the new railroad. By the 1920s, the Monongahela operated nearly 300 miles of tracks and hauled over 2 million tons of coal monthly.

The growth of the railroad and coal led to an influx of population, mostly immigrants from southern and eastern Europe. 1 Brownsville’s commercial district along Market Street became the center of commerce for the region, home to coal and coke companies, professional offices, and banks. Much of the city’s 19th-century buildings were razed for taller and more substantial structures.

The Second National Bank was originally organized as the First National Bank of Brownsville in 1863. 2 Due to banking laws, its charter ran slightly less than 20 years and could not be renewed. A few months before the permit was set to expire, the bank voluntarily liquidated and reorganized in 1882 as the Second National Bank. In 1916, it constructed a new bank structure, designed in the Neoclassical style with a limestone facade, across from the Flatiron Building. 1

The construction boom continued unabated in Brownsville during the 1920s, despite signs that the region’s coal and coke industry was in trouble. 1 The introduction of by-product coke ovens at steel mills eliminated beehive coke ovens that were plentiful near Brownsville. Additionally, a new coking process cut the dependency on the high-grade coal fields that were plentiful in the region. The Great Depression also halted growth, which started a long and painful decline in the prominence of Brownsville.

The first sign of trouble from the Great Depression came in mid-1930 when financial problems forced Juibelirer Bank to close. 2 It was followed by the failure of the Brownsville Trust Company on August 18. Spurred by the rapid decline of other banks in the city, the Monongahela National Bank and Second National Bank decided to merge on August 25, consolidating $7 million into one institution. The merger had been planned for months, but the timing was deliberate. 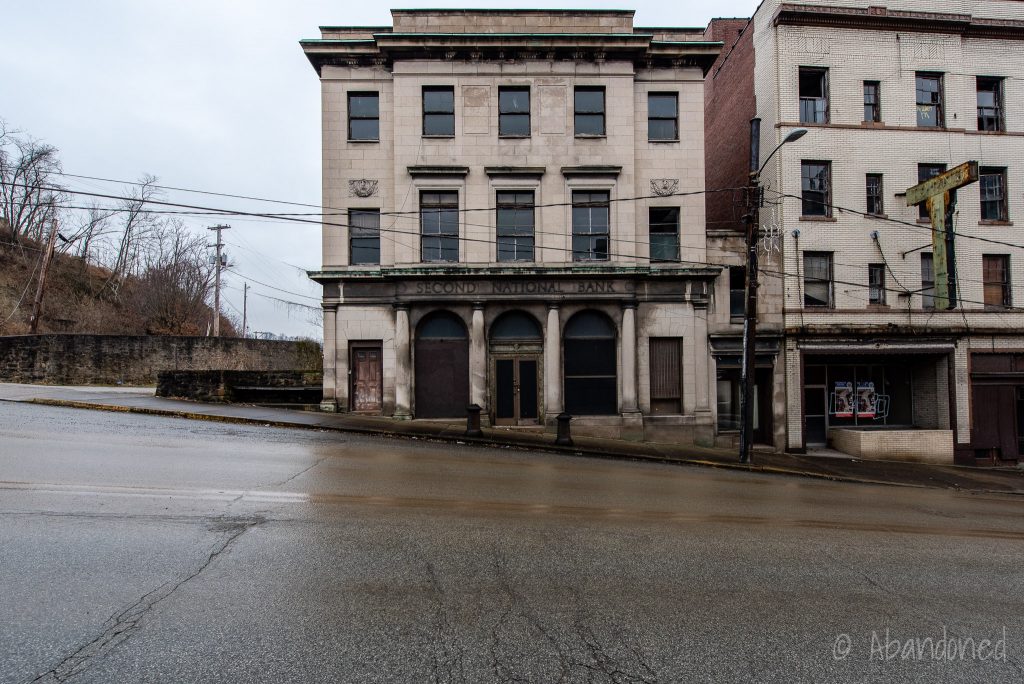 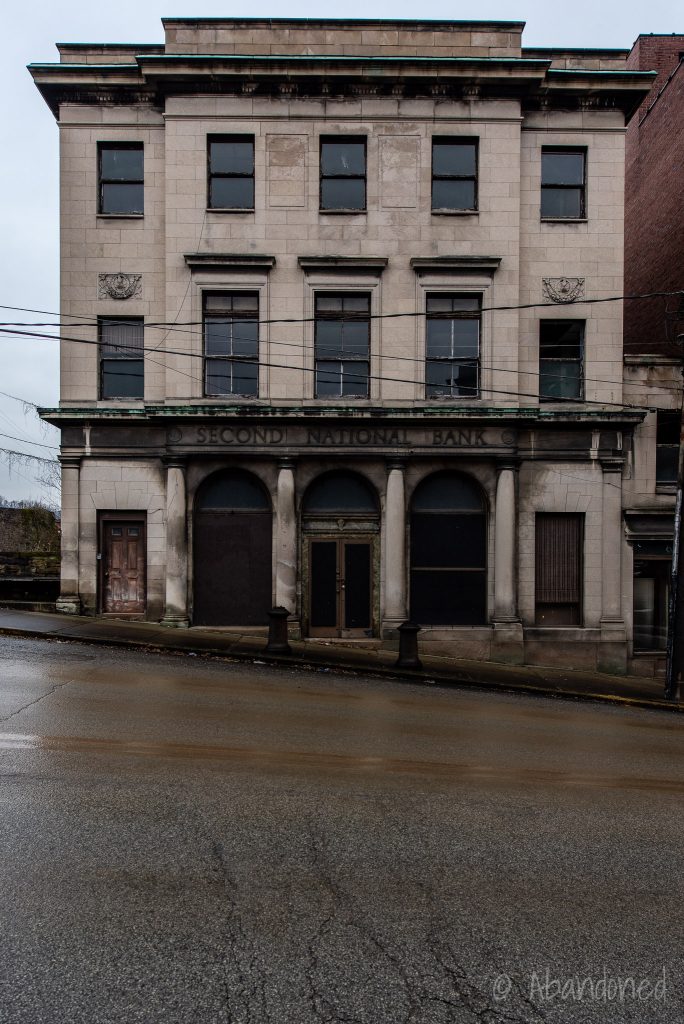 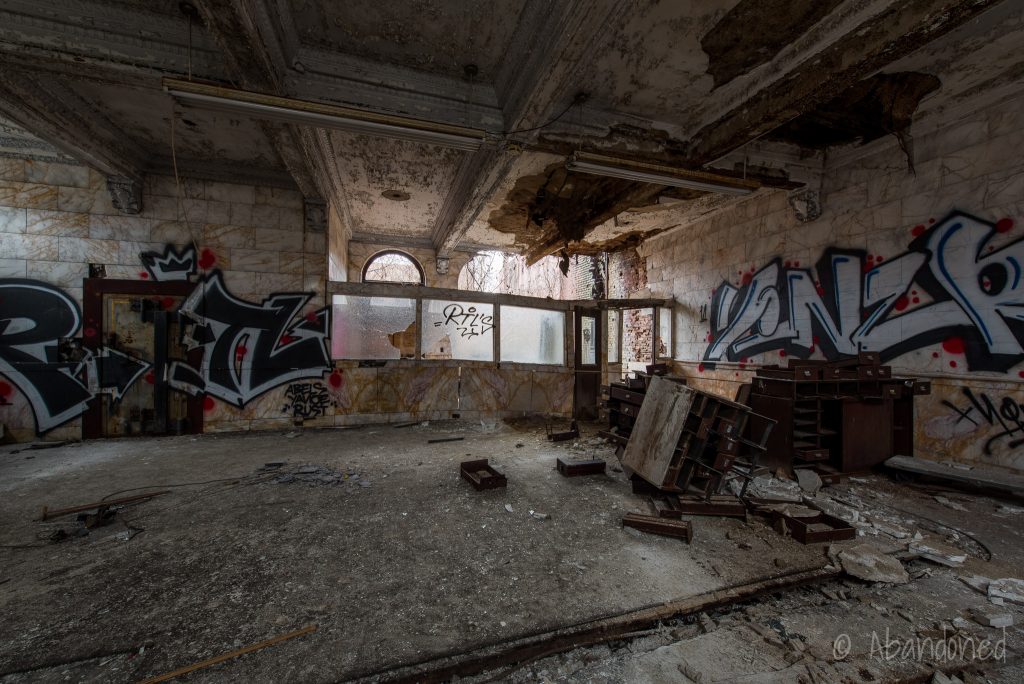 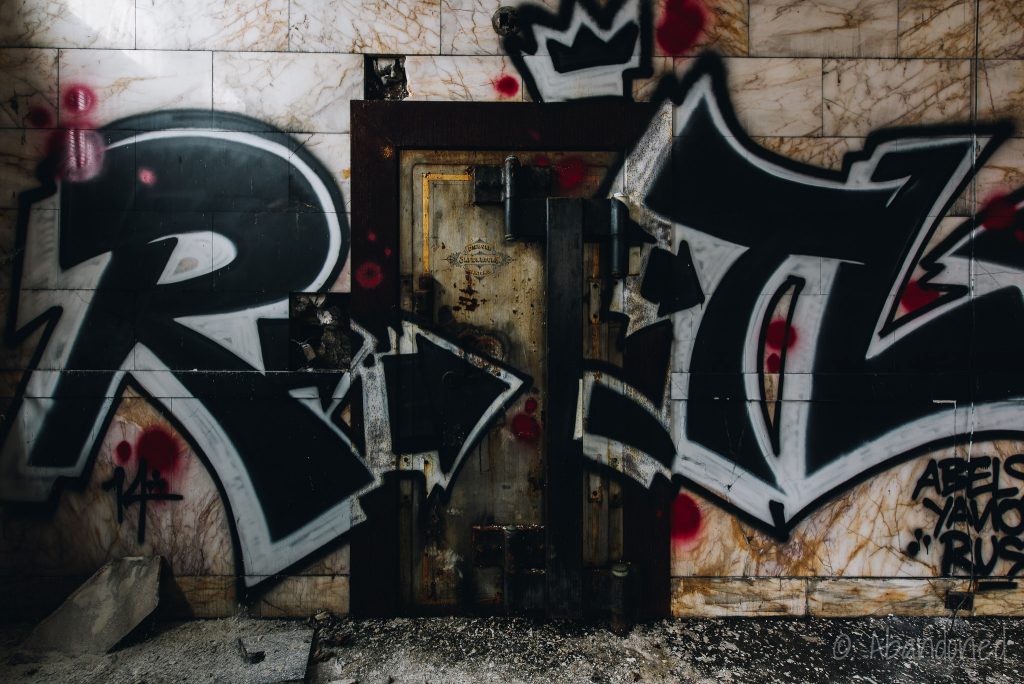 The Monongahela National Bank was formed on May 12, 1812, on Front Street. 4 It moved to Rose House on Market Street in 1873 before relocating to another building at 41 Market Street in 1902. 1 The brick, Italian Renaissance facade contained pink and red terra cotta and a second-story Palladian window. The first floor included an elaborately carved stone facade and Corinthian columns.

In March 1923, the National Deposit Bank constructed a new bank building at the corner of Bank and High streets. 6 Not to be outdone, the Monongahela National Bank approached the owner of the Monongahela Hotel across the street, asking if he would consider selling. The hotel owner agreed. The Monongahela Hotel relocated next door to a new four-story, 110-room facility. 5

From 1923 to 1925, the bank replaced the Neoclassical facade of Indiana granite on the hotel with pairs of Ionic columns and large steel-framed windows. 1 It moved into the office by the end of the year. Shortly after moving, the bank removed the first-floor facade of its former building and relocated it to the public library on Seneca Street.

The upper floors of the new bank were left intact as a 20-room annex to the hotel. 6 In 1930, the third Monongahela National Bank building at 41 Market Street became home of the Jubelirer Bank, which relocated from the Flatiron Building. 2

The combined Second National Bank and Monongahela National Bank, under the latter name, collapsed on April 7, 1931. 2 3 A federal receiver was appointed for the bank on April 16, and on May 4, the bank reopened, but depositors were unable to withdraw their money. 3

On December 1, the bank opened for several days and distributed an initial dividend of 15% to approximately 6,000 depositors. 3