Mount St. Mary’s Hospital was founded in 1907 by the Sisters of St. Francis, who came north from Buffalo to care for the sick and indigent in Niagara Falls. 5 The Sisters operated out of the “House on the Corner,” as it was known, a 30-bed former residence at the corner of 6th Street and Ferry Avenue. 1

The circa 1890, 2½-story cross-gable Queen Anne style “House on the Corner” featured 3- and 4-story square towers and a large wrap-around porch. 5 It was the former residence of prominent Niagara Falls businessman John C. Lammerts who was active in the insurance industry. Lammerts also served as a Democratic party leader and as a postmaster in the Village of Suspension Bridge. He served as a county treasurer until 1899.

In 1901, the house was used as the Electro-Magnetic Sanitarium of Niagara Falls, where “electro-therapeutics” were used on patients suffering from chronic nervous and mental disorders. 5 It was then taken over by the Sisters of St. Francis in 1907.

The early 1900s was a time of immense growth for Niagara Falls. The development of hydroelectric power plants along the Niagara River meant that cheap, reliable power could be harnessed by factories that soon sprawled out into the countryside. The new factories meant that more workers were needed, and the population increased from 19,500 in 1900 to 30,500 by 1910.

Needing a larger facility to accommodate the influx of people, the Franciscan Sisters developed plans for a large, modern hospital. 5 Construction of the new facility, Mount St. Mary’s, began in 1912 and was opened on November 11, 1914, by Bishop Charles H. Colton. 5 Designed by William P. Ginther in the Neoclassical Revival style, 5 it was constructed by the Allen Smith Contracting Company at a cost of $400,000. 1 5

The hospital was significantly larger than its predecessor, with a central nine-story tower flanked by matching five-story wings, connected with a central seven-story corridor. 5 Inside, the ward layout reflected the type of patient care needed.

Waiting rooms flanked the main lobby on the first floor, with patient rooms running through each of the three ward blocks on the first three levels. 5 A chapel was located on the fourth floor while the fifth floor contained the operating room and X-ray departments. The sixth floor included the laboratory department, nurse training classrooms and recreation spaces.

The new building incorporated music therapy into the building design, whereas an organ playing in the chapel was able to be heard throughout the facility. 1

The only significant addition to the hospital came in 1948 when a three-story service building was built for $400,000. 1

Niagara Falls continued to grow well into the mid-1950s, topping out at 102,400 in 1960. Due to limited room for expansion, Mount St. Mary’s became overcrowded. 5 In 1960, plans were developed for a new 220-bed hospital on a 27-acre lot in Lewiston on land the Sisters of St. Francis had acquired from the New York State Power Authority. The new $5.5 million hospital was completed in 1965.

The original Mount St. Mary’s Hospital was then renovated at the cost of $1.5 million and reused as the 104-room St. Mary’s Manor nursing home in 1966. 5

The renovations, designed by local architect Mortimer J. Murphy Jr., entailed partitioning the large open wards at the east end of the south block to accommodate more patient rooms, while the private rooms on the west end of the center block were removed for expanse solariums. 5 Some windows were infilled with brick to allow for code-compliant stairwells to be constructed. Sun porches, originally designed to aid in the patient’s recovery, were infilled with brick to create additional interior space and to bring the stairwells up to fire code.

The Sisters of St. Francis turned over sponsorship of the St. Mary’s Manor to the Daughters of Charity in 1997.

Construction of a new 250-bed facility began in September 2001 and opened as Our Lady of Peace in 2003 at the cost of $39 million. 2 The St. Mary’s Manor closed immediately after.

The former nursing home has been sold at least five times since the closure. 1 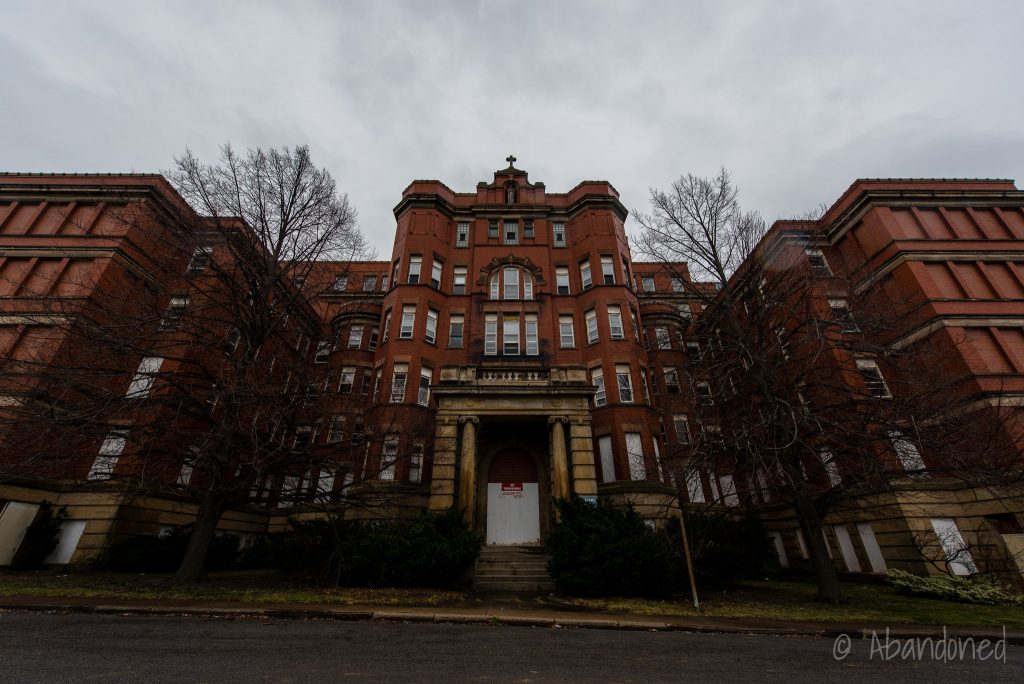 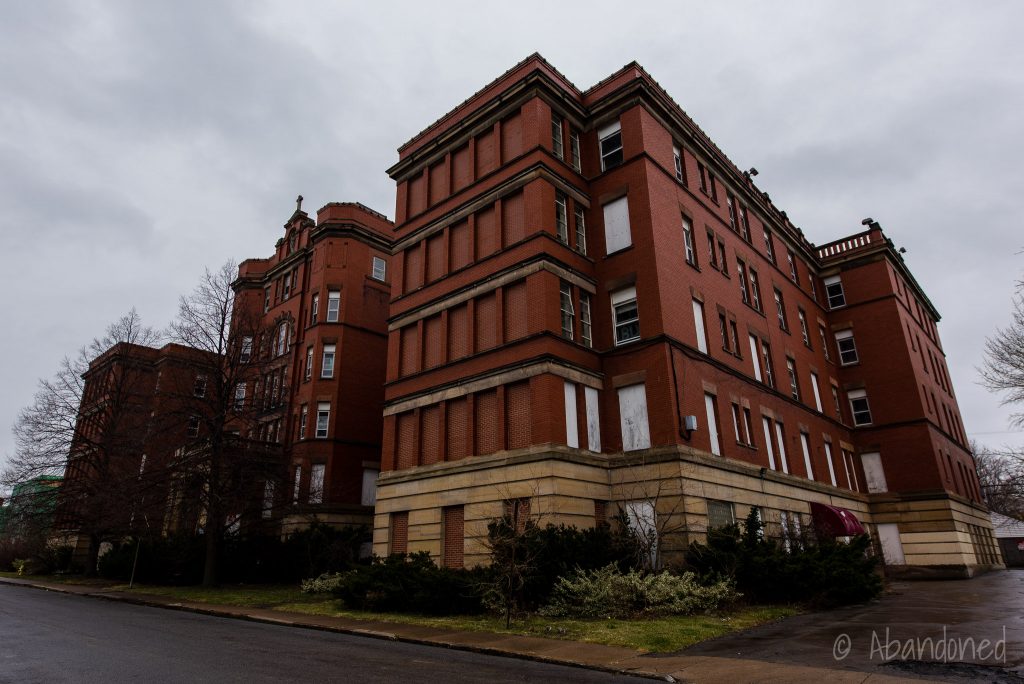 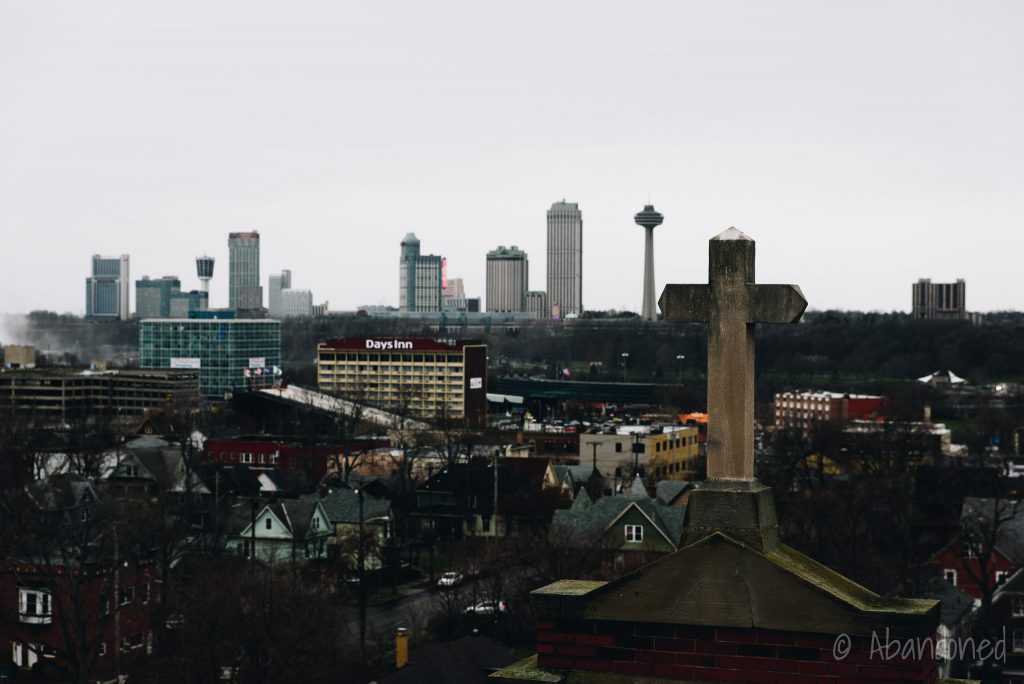 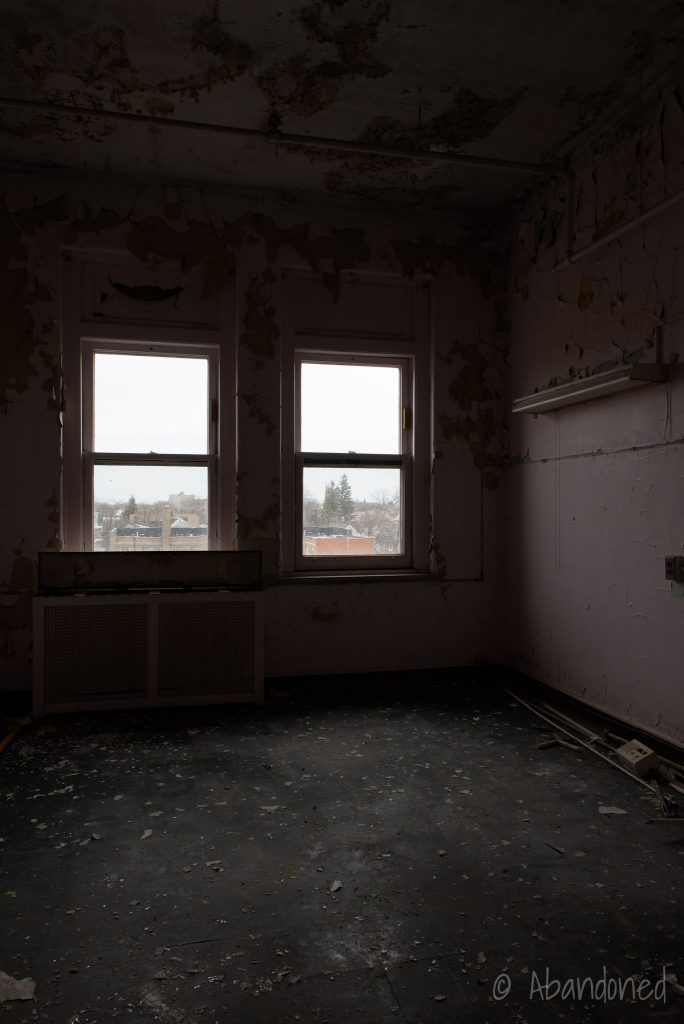 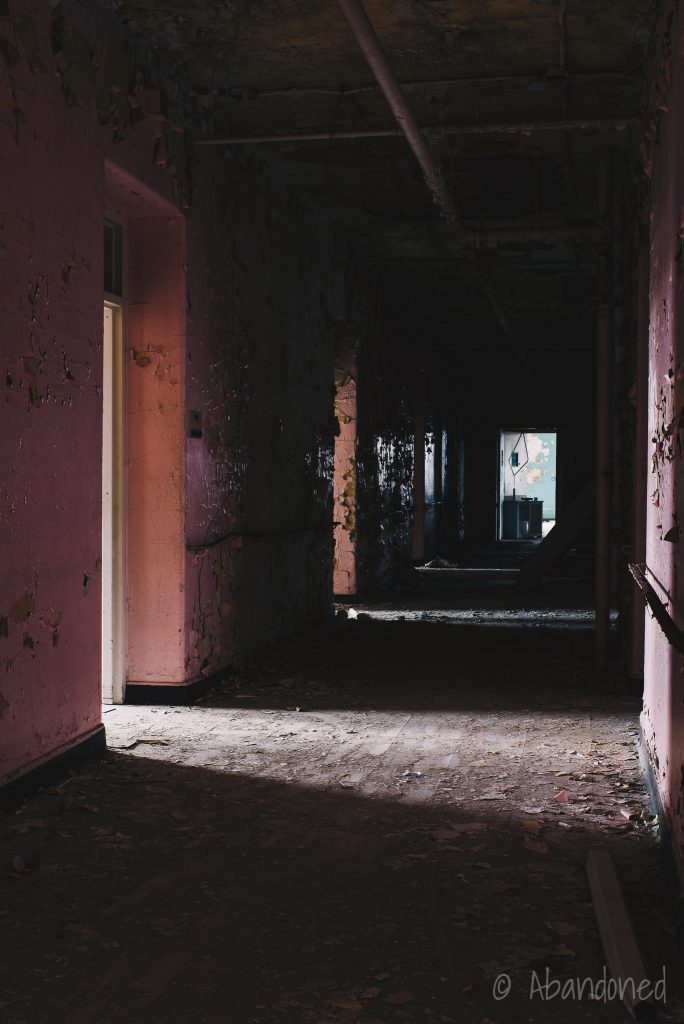 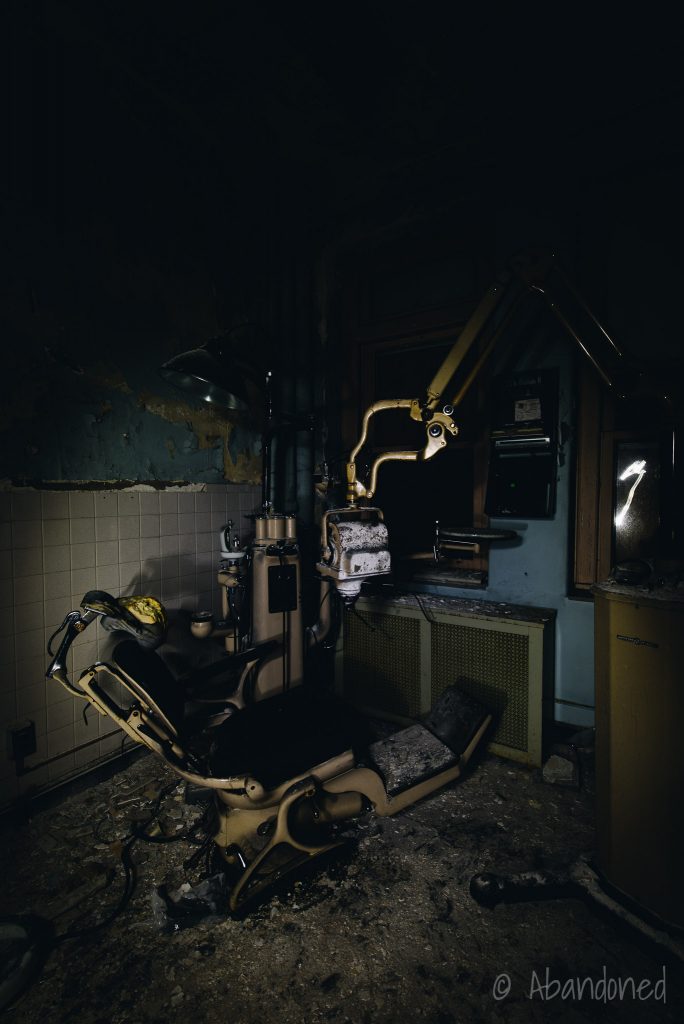 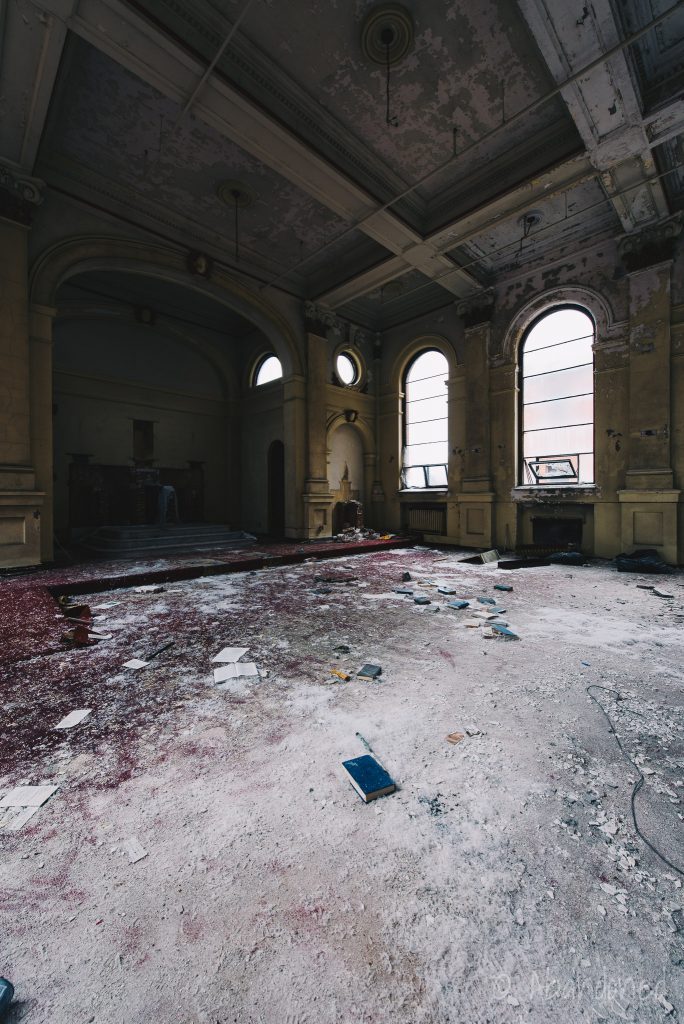 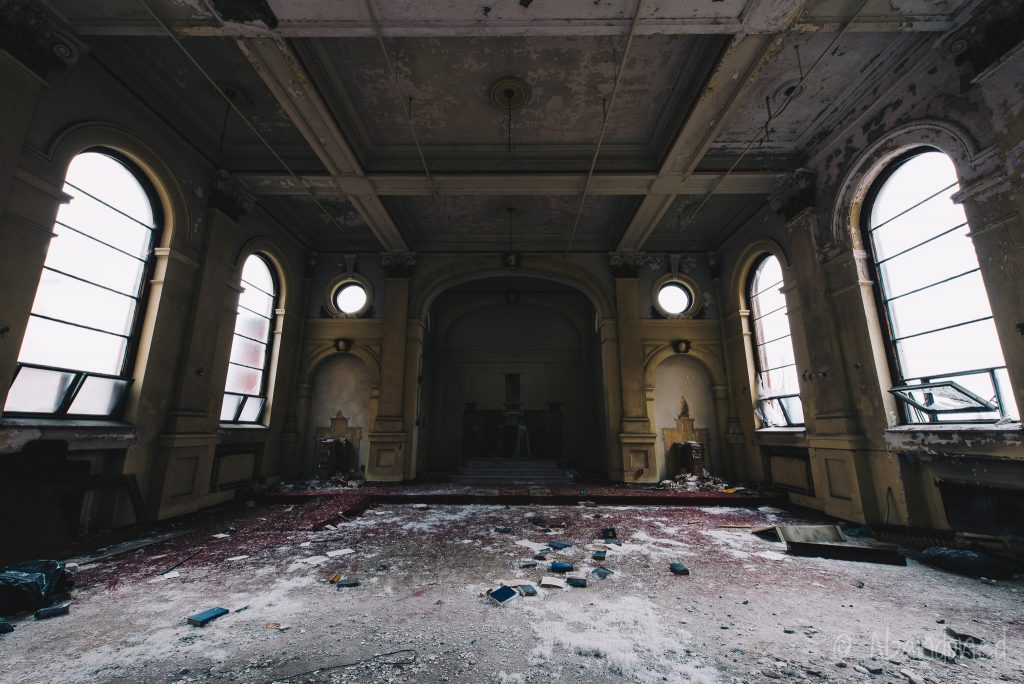