The Cleveland Twist Drill Company had its roots in a small Dunkirk, New York twist drill factory founded by C.C. Newton. 6 Jacob Cox, Sr. used $2,000 borrowed from his father to acquire a 50% stake in the factory in 1875. Cox convinced Newton to relocate the business to the bustling port city of Cleveland in September 1876.

In 1880, Cox bought Newton’s stake in the business but was left with $9,000 in debt. 6 He invited a nephew, Frank F. Prentiss, to take a 40% share and become the company’s salesman. That left Cox to focus on the design and manufacturer of tools and machines for what was then known as Cox & Prentiss.

By 1886, Cox attempted to sell the floundering business for $75,000 but after finding no investors, Cox continued, and the company rebounded. 6 In June 1888, the firm relocated to larger quarters (at today’s Lakeside and East 49th Street). The Cleveland Twist Drill Company was incorporated in 1904. Thereafter, Cox retired, with Prentiss succeeding him.

In 1910, Cox rejoined Cleveland Twist Drill and served as president until 1919 when he became chairman. 6 His son, Jacob Cox, Jr., was elected president.

Cleveland Twist Drill’s research and eventual patent of the “Mo-Max” brand of high-speed steel, manufactured out of molybdenum-tungsten, cut costs and saved the company from having to rely on increasingly scarce tungsten steel. 6 It helped the company expand at the end of the Great Depression and into World War II.

The National Acme Company was founded in Hartford, Connecticut as the Acme Screw Machine Company in 1895 by mechanics Edwin C. Henn and Reinhold Hakewessell. 1 The pair had taken more than a decade to perfect and patent their first multiple spindle automatic lathe in 1894. 6 A friend loaned them capital to start up the business, but by 1897 it was in financial peril.

By 1914, National Acme was one of the city’s top manufacturers. 10 The company constructed a new plant, designed by George Smith Rider, at East 131st Street and Coit Road in 1916. 10 Rider, a Rhode Island-born engineer, was responsible for the design of many industrial facilities in the Cleveland region.

With the move, National Acme simplified their operations, 1 and it exited the manufacturer and distribution of screw machine products, focusing instead on the production and sale of automated machine tools, foundry equipment, and electrical controls. 2

In 1915, National Acme acquired the Windsor Manufacturing Company of Vermont, which produced Gridley-brand multiple spindle automatic machines. 6 It was a wise move as demand for that product spiked during World War I. But its reliance on the federal defense department left vast surplus inventory and underused buildings at the conclusion of the war. The Great Depression that followed nearly ruined the company.

National Acme had learned its lesson from the previous world war and correctly anticipated weakening demand for its products. 6 Over the coming years, the company acquired the Bay State Tap & Die Company of Massachusetts in the 1950s, Shalco Systems in 1959, and the Eastern Machine Screw Company of Connecticut in 1967, among other subsidiaries and operations in Mexico, Canada, and Europe. 4 6

The Acme-Cleveland Corporation was formed on October 25, 1968, 2 through the merger of the Cleveland Twist Drill Company and the National Acme Manufacturing Company. 1 It was focused on the machine tool, foundry equipment, and electrical controls in the automotive, screw machine, and capital equipment industries. 6

In 1972, Acme-Cleveland acquired LaSalle Machine Tool, which manufactured systems for the automated production of internal combustion engines. 6 By 1980, Acme-Cleveland had become one of the largest machine tool manufacturers in the United States, with net sales of $405 million.

To diversify its product portfolio with emerging technologies and to shield against the effects of a long-term slump in machine tool sales, Acme-Cleveland acquired telecommunications manufacturer Communications Technology Corporation in 1984 for $33 million. 1 5 It spun off the LaSalle division in that year, which helped reduce the company’s dependence on the automobile market. 6 Acme-Cleveland purchased TX Port in 1994, a producer of network access equipment. It also acquired Namco Controls Corporation, a manufacturer of electronic sensors, and M&M Precision Systems Corporation, a manufacturer of precision measurement products.

The turnaround was working. By 1990, Acme-Cleveland had recorded its third successive profitable year, but the divestment of its metalworking operations continued on. 6 The company sold Cleveland Twist Drill in the fall of 1994 to Greenfield Industries, a cutting tool manufacturer, 1 followed by the sale of National Acme to DeVlieg-Bullard Inc., a corporation that specialized in machine tools, in 1995. 1 6 By the end of the year, the telecommunications sector of the company accounted for 75% of its total operating earnings. 6

Acme-Cleveland’s stock rose accordingly. In 1996, the company was acquired by the Danaher Corporation, a manufacturer of tools, components, and environmental controls, for $200 million. 1

The East 131st Street plant continued to be used by DeVlieg-Bullard for the manufacture of original equipment. 9 DeVlieg-Bullard filed for Chapter 11 bankruptcy in mid-1999, and the factory was sold to a real-estate holding company. One-sixth of the space was leased back to DeVlieg-Bullard which began moving machinery to its other plant in Twinsburg. In January 2002, the sales and engineering departments were relocated out of the building to Twinsburg to consolidate operations with the DeVlieg Bullard’s rebuild division. 9 All that remained was the manufacture of the high-precision spindle carrier for the Acme-Gridley machine.

In June 2011, Christopher L. Gattarello, on behalf of All Points, a garbage disposal company, leased the former National Acme factory for a cardboard and paper waste recycling facility. 7 8 A July estimate to complete partial demolition and asbestos abatement in the factory was $1.5 million.

Gattarello motioned in August that cardboard and paper waste, along with municipal garbage, be delivered to the facility for recycling. 7 8 Thousands of tons of recyclables and garbage were delivered to the plant, and by April 2012, most of the interior of the factory was filled with trash from floor to ceiling. 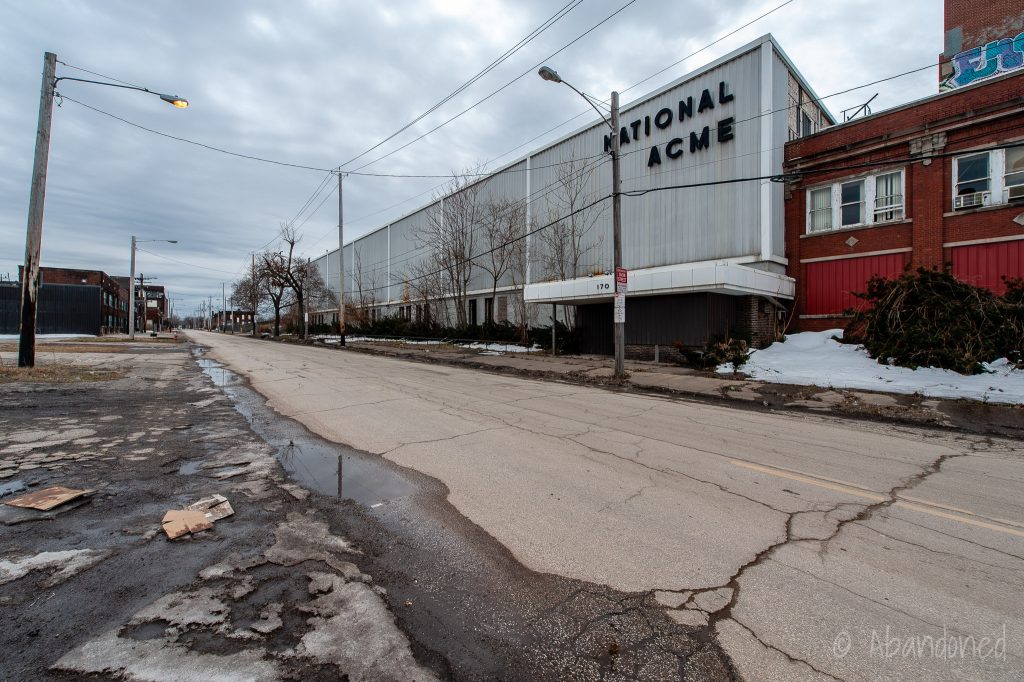 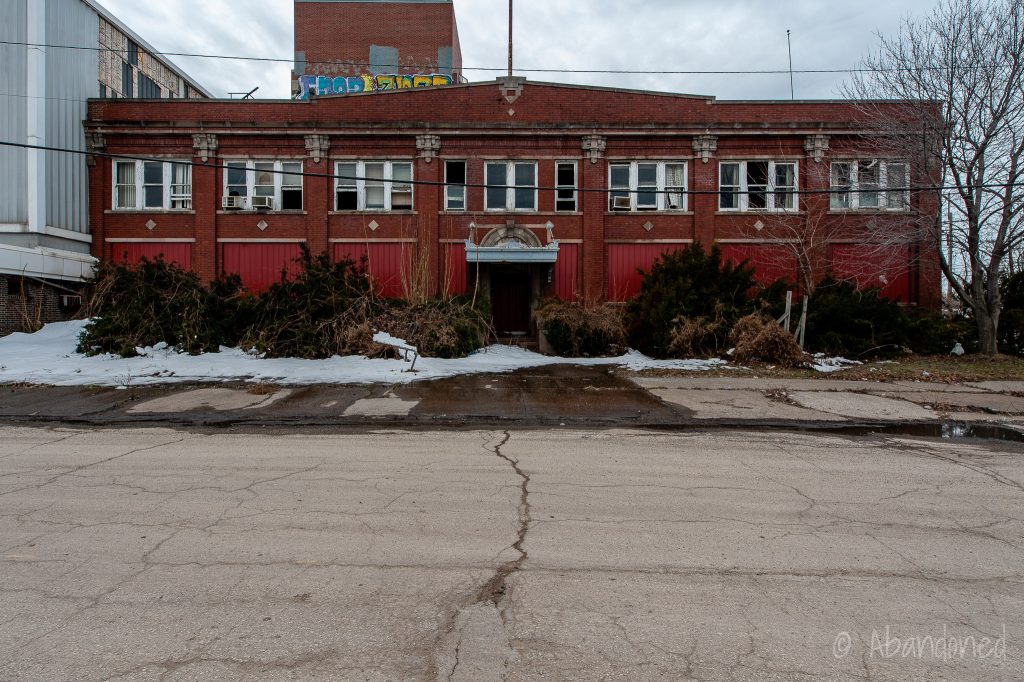 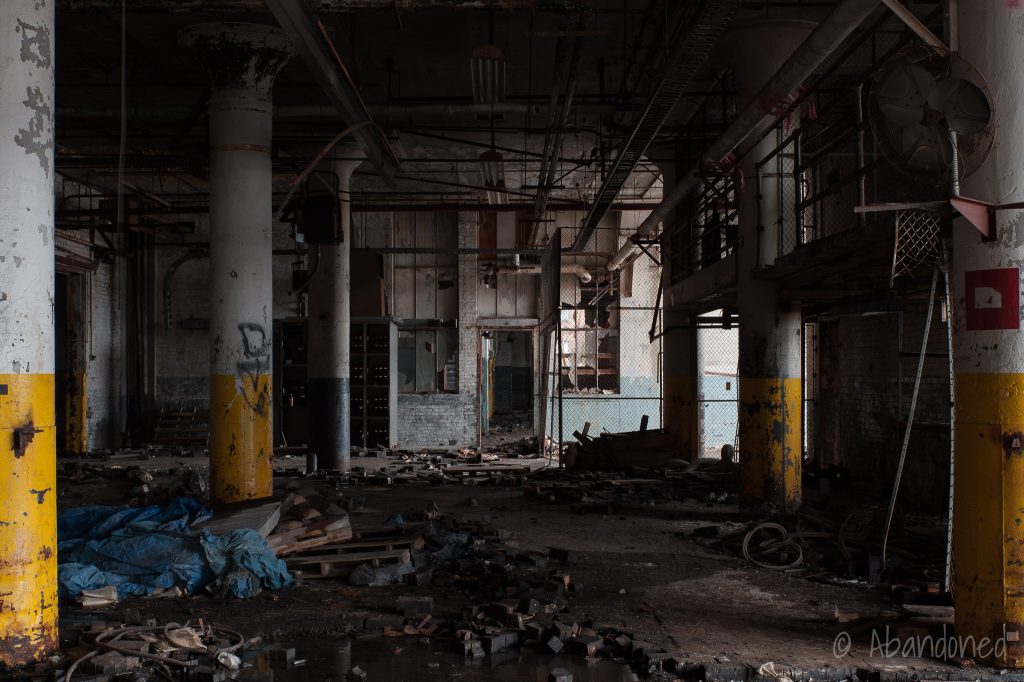 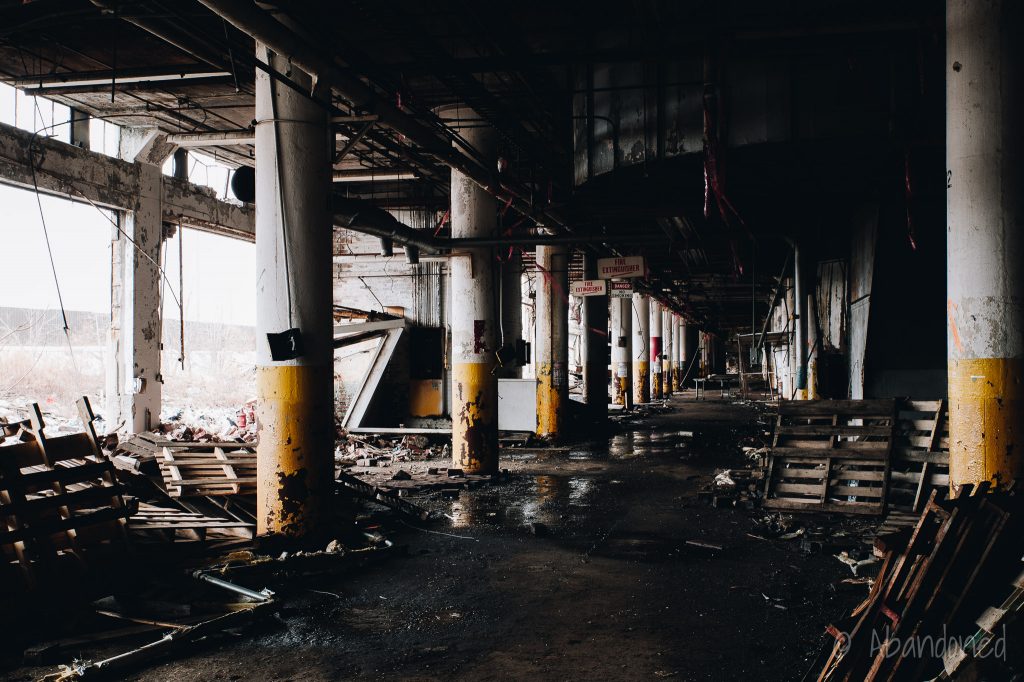 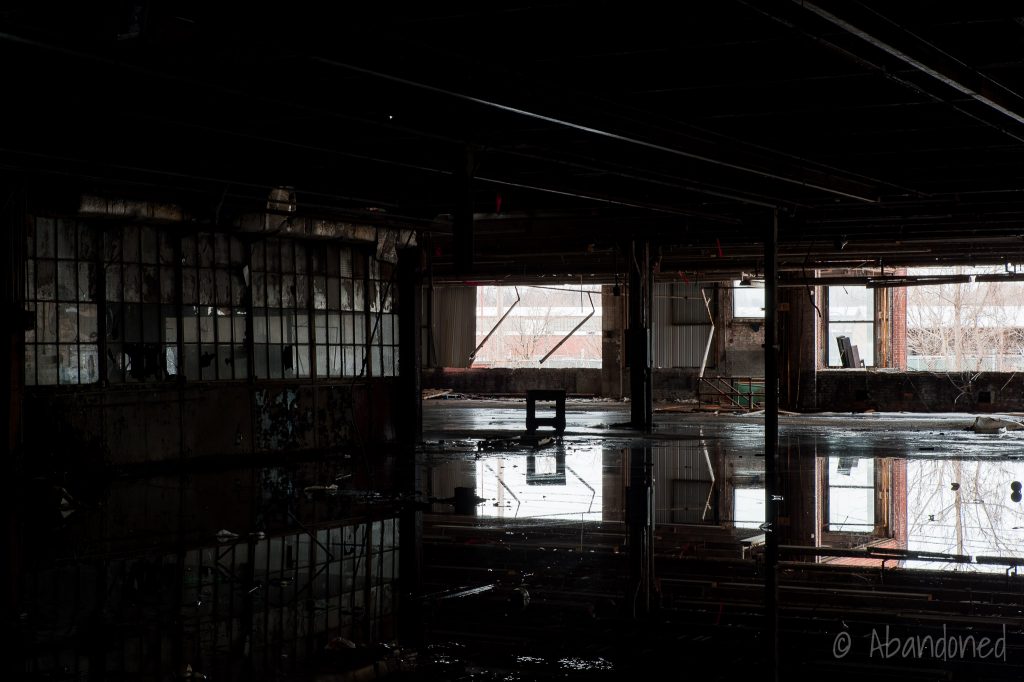 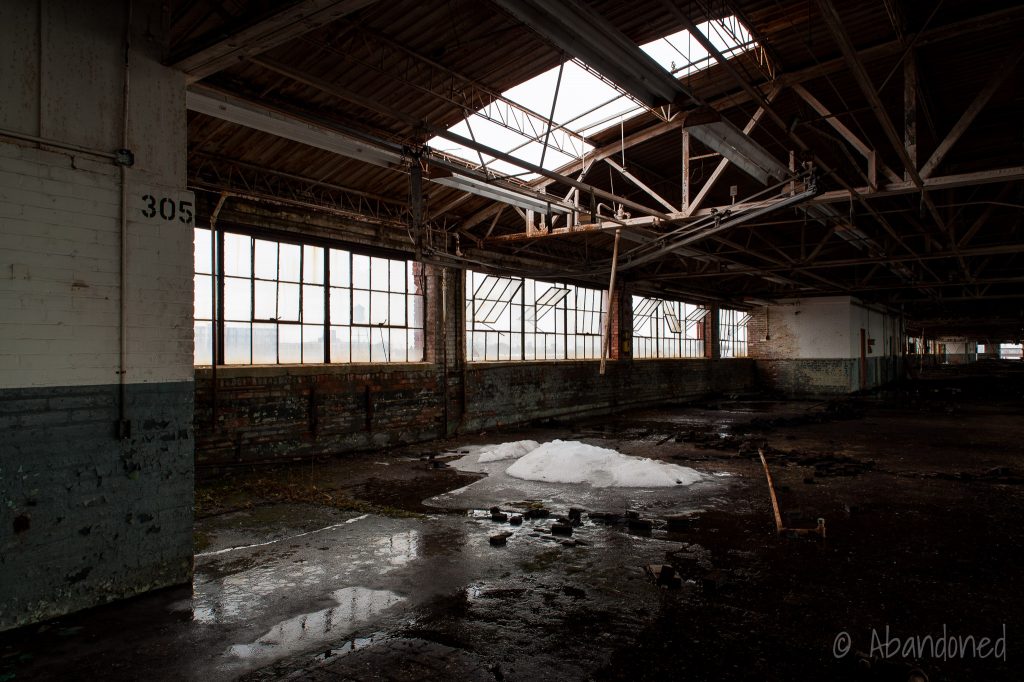 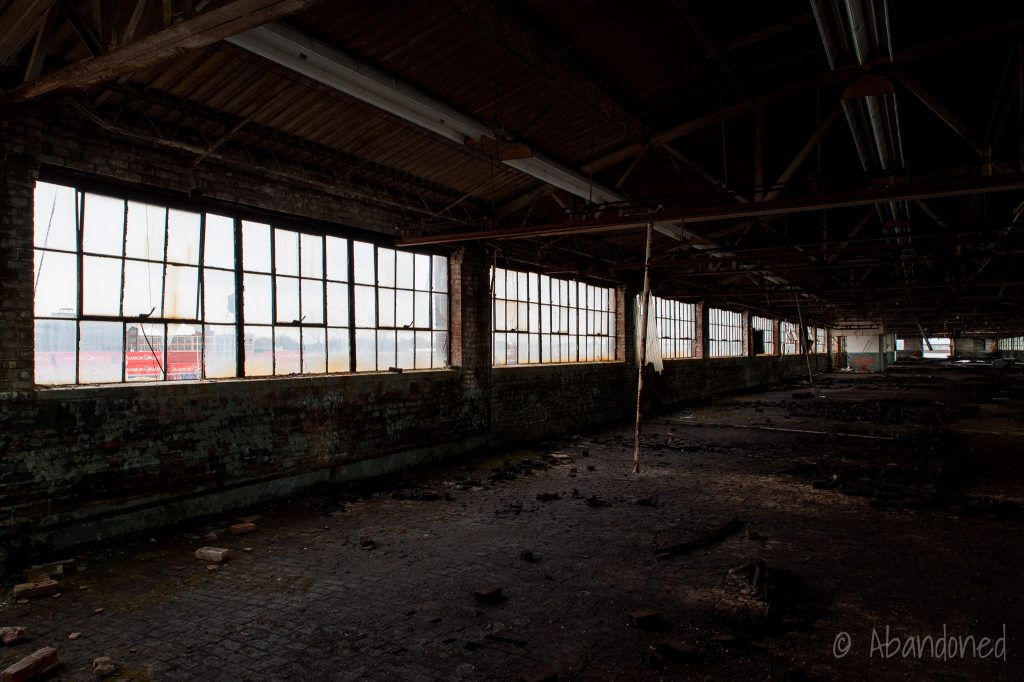 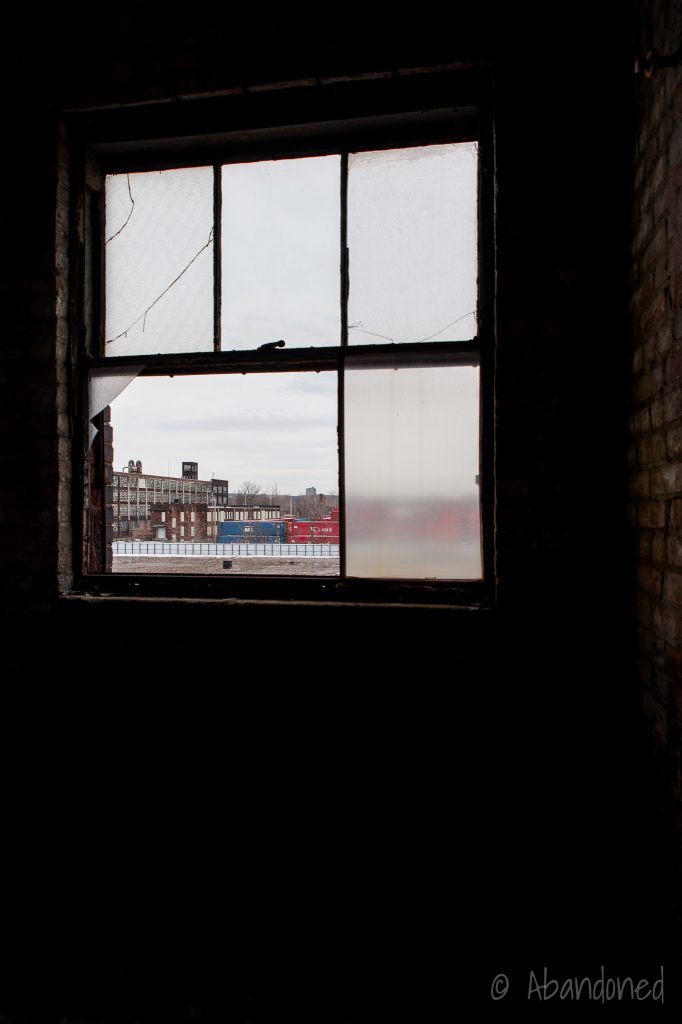 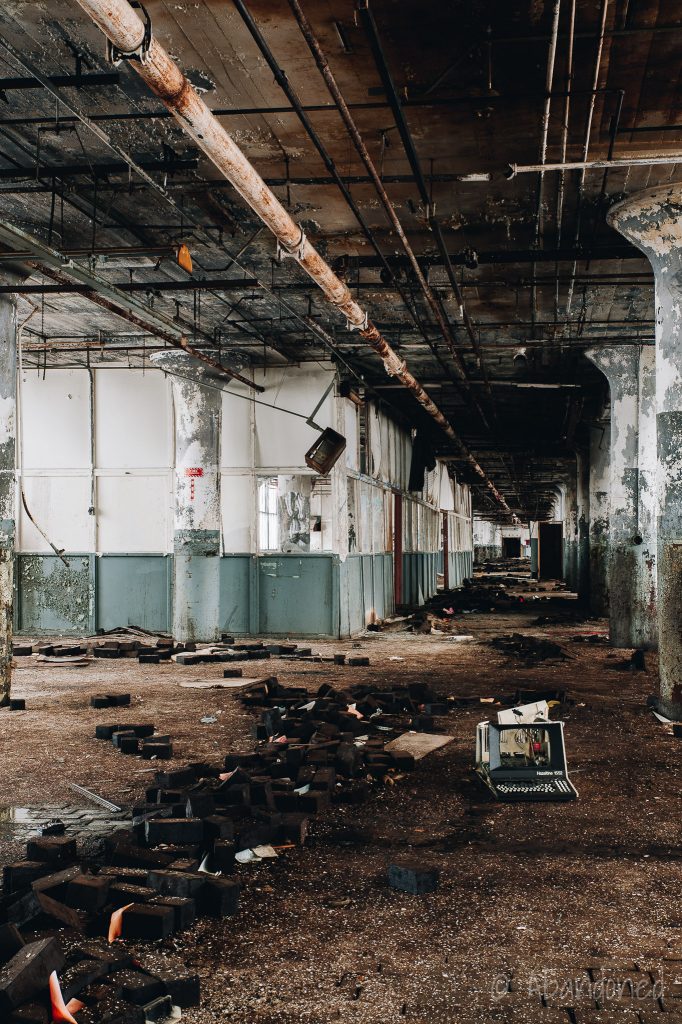 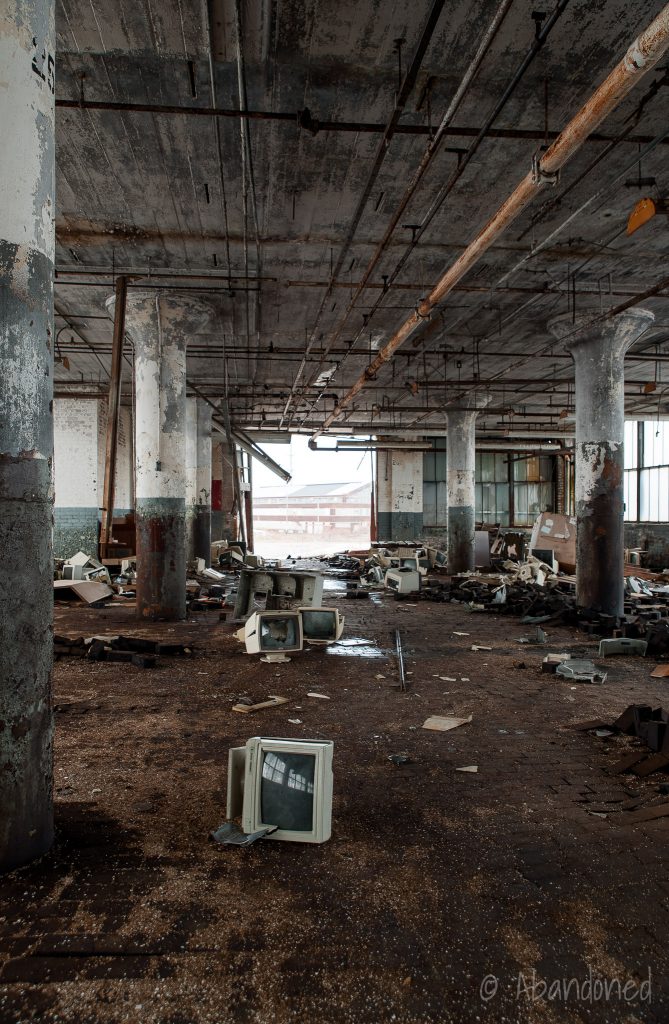 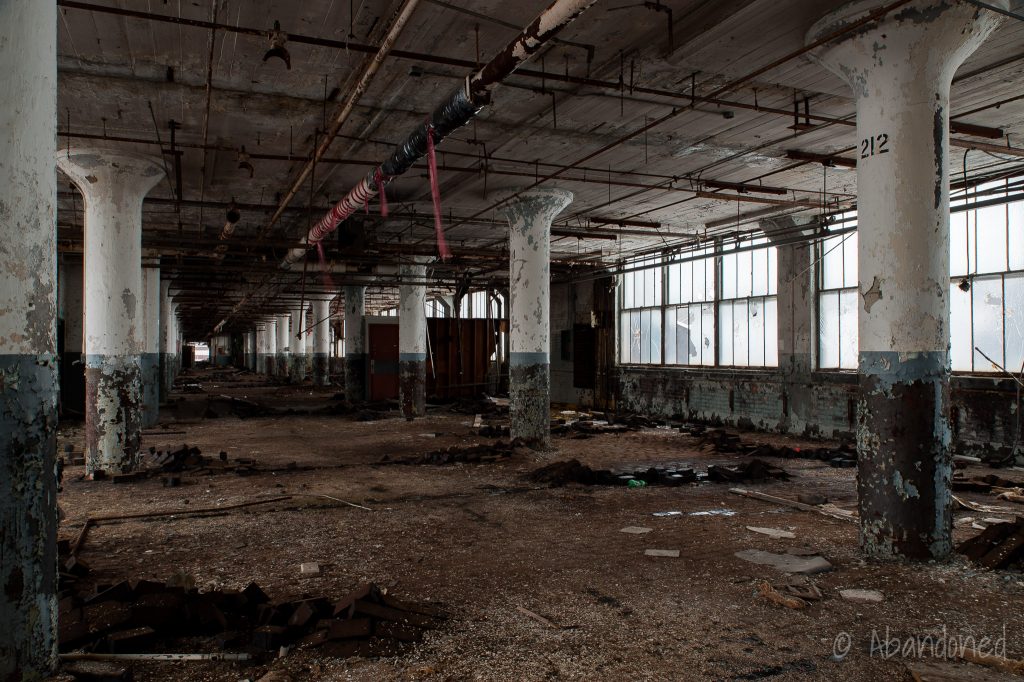 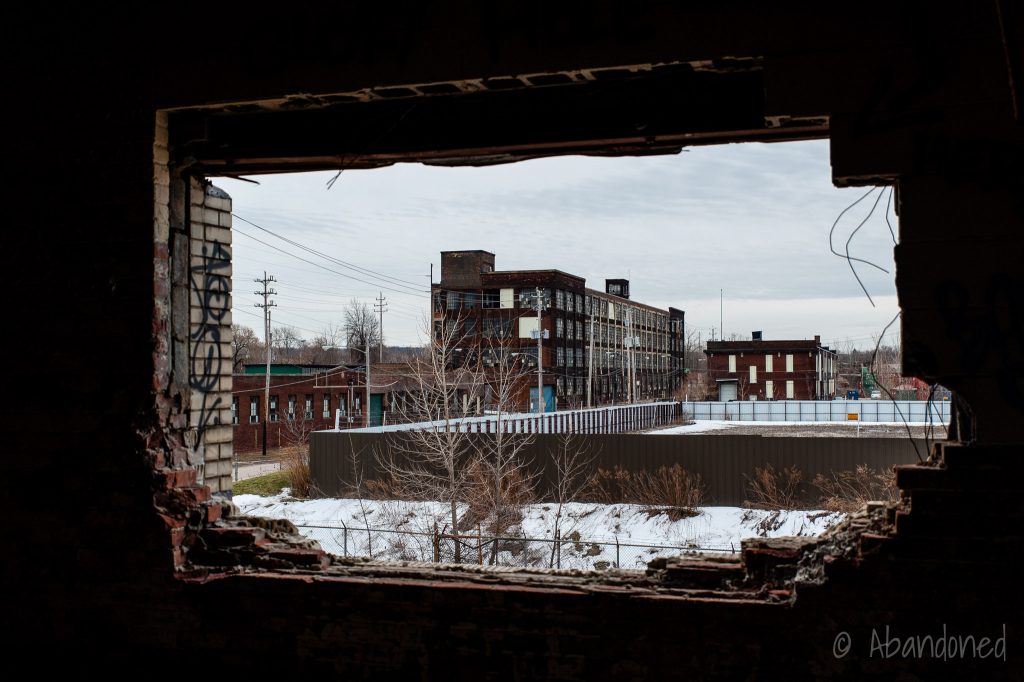 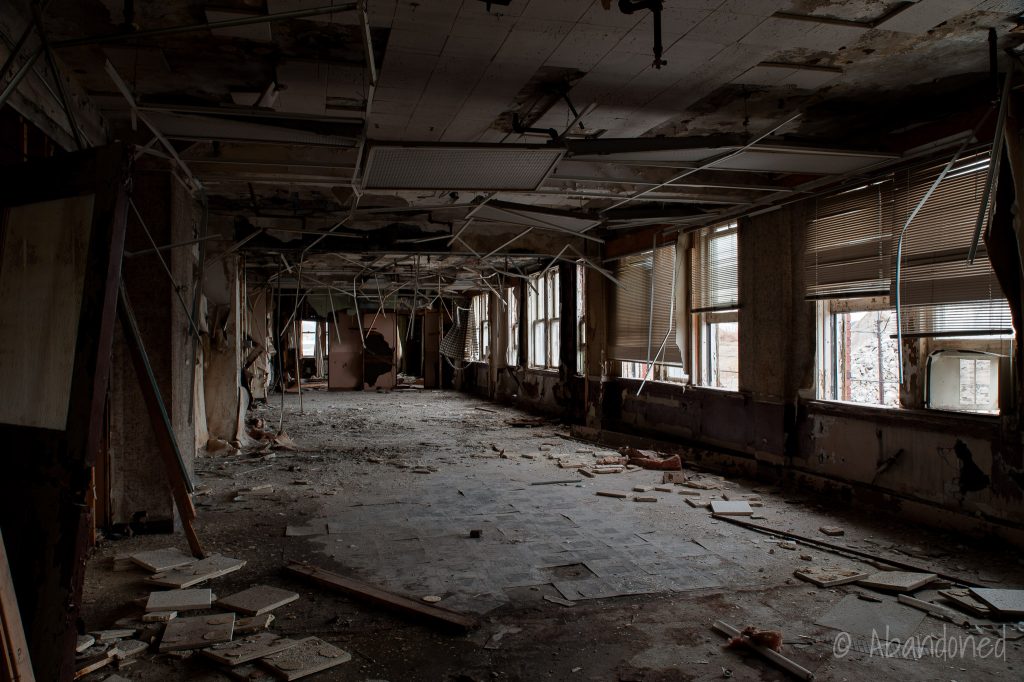 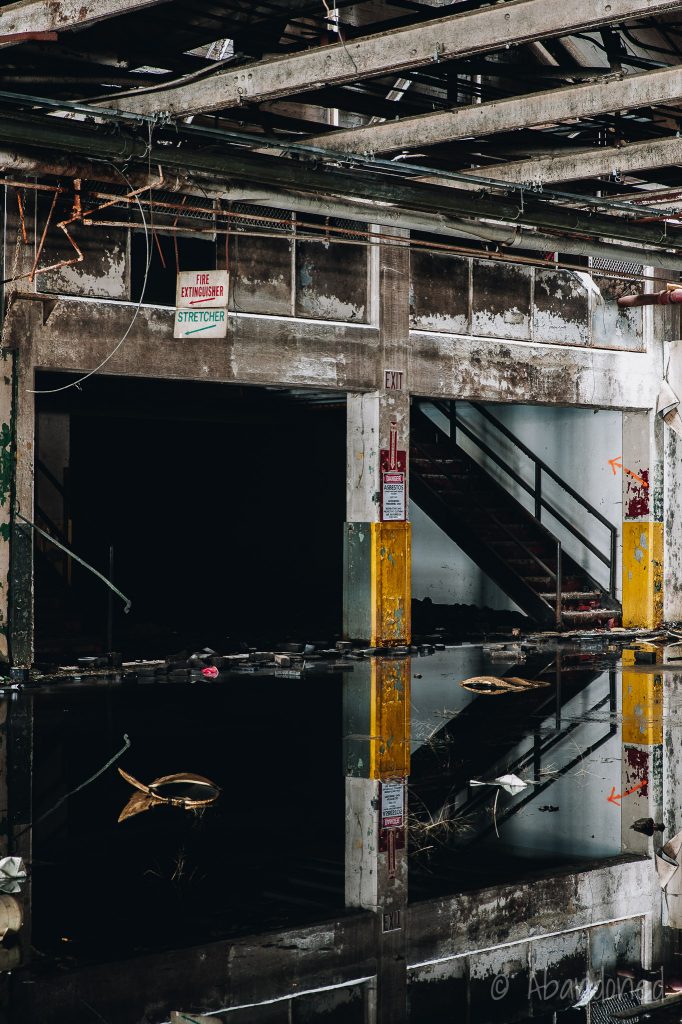 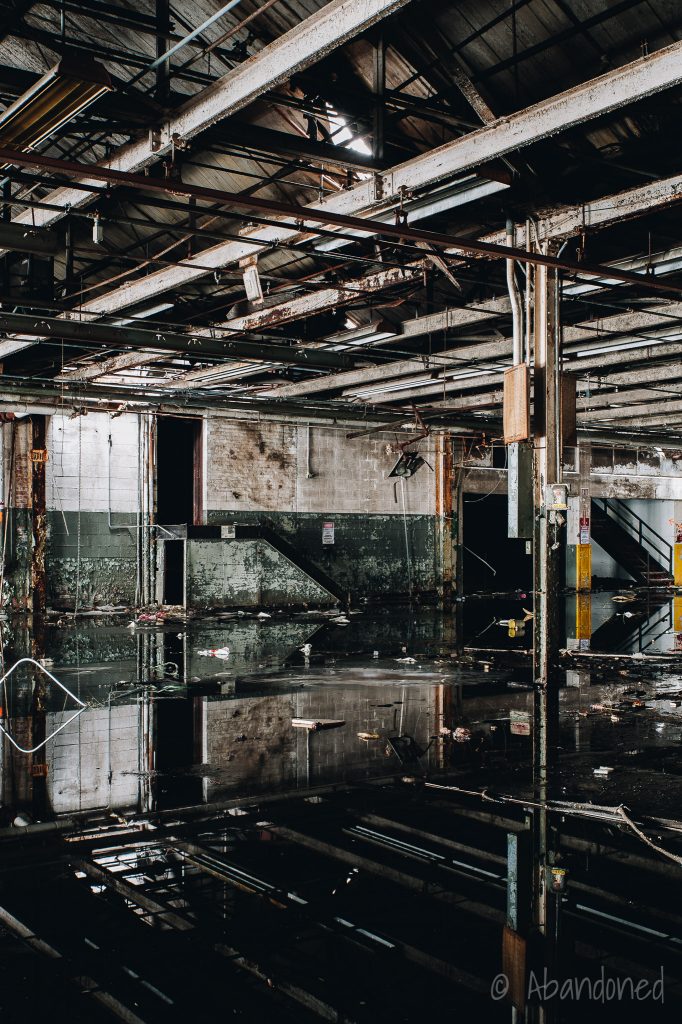 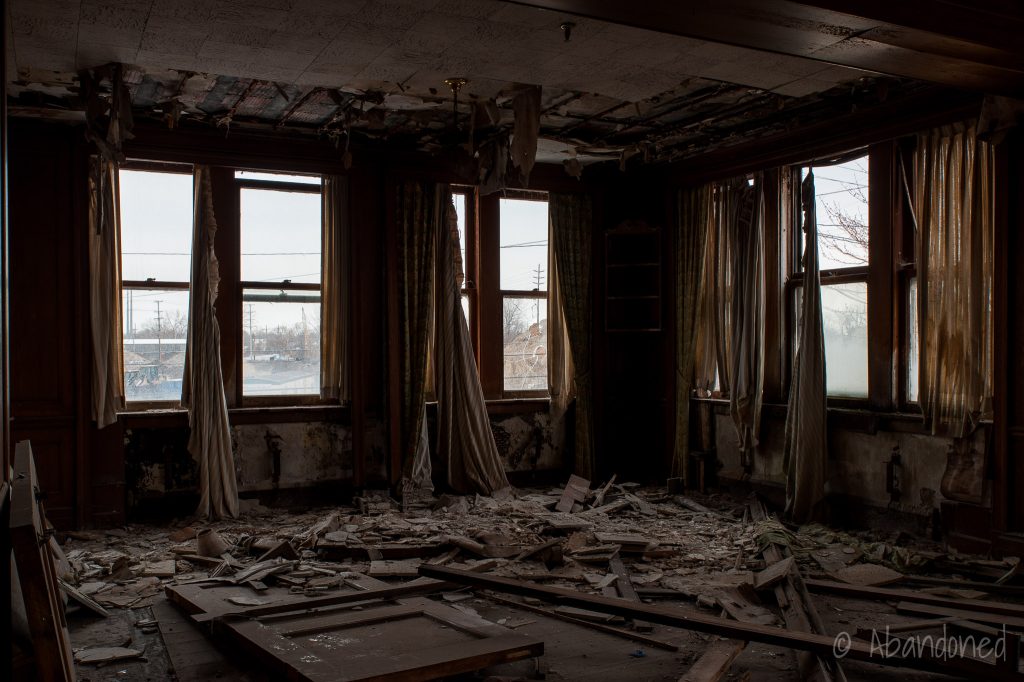