The remains of four iron furnaces, operated by the Lackawanna Iron Works, are located in Scranton, Pennsylvania. The company was instrumental in the production of nails and rails.

As early as 1838, William Henry was investigating the feasibility of establishing an anthracite coal-fueled blat furnace along Roaring Brook in the Lackawanna Valley. 2 Henry had been the first American to experiment successfully with applying a hot blast to the smelting of iron ore at the Oxford Furnace in Belvidere, New Jersey. The Roaring Brook area contained abundant deposits of anthracite, limestone, and iron ore, and the reliability of Roaring Brook for water power made the furnace location ideal.

Henry did not have the capital to acquire land or start-up operations, so in 1840, formed a partnership with his son-in-law Seldon Scranton, George Scranton, and Sanford Grant. 2 Together, along with Joseph and Erastus Scranton of Augusta, Georgia, they were able to purchase 503 acres in what was called “Slocum Hollow” along Roaring Brook. Later, Phillipp H. Mattes of Easton acquired a fourth interest in the firm for $5,000.

Under the direction of Henry, the furnace was completed by Simon Ward and William Manness in early 1841. 2 Thomas P. Harper finished the waterwheel on Roaring Brook shortly after. 1 2 The hot blast equipment did not arrive until later in the year, delaying the completion of the facility. 2

The first hot blast of the Lackawanna Iron Works was attempted on October 9, 1841. 2 Power was generated by the waterwheel, which turned a connection shaft that caused two reciprocating blowing tubs to rise and fall, forcing air into three cast-iron tuyeres (pipes) encased in water-cooled jackets. 1 Each tuyere passed through the archways in the rear and on the sides of each furnace, just above the hearth. A lack of sufficient air pressure caused the tuyeres to become blocked. 2

It was not until mid-January 1842 that the furnace was in full operation, thanks to repairs conducted by John F. Davis, a Welsh ironmaker who was familiar with anthracite furnaces. 2

The furnaces were filled from the top with alternating layers of iron ore, anthracite coal, and limestone. 1 The heated air blast caused the coal to burn, which in turn melted the iron ore and limestone. The calcium in the limestone acted as a flux that removed impurities from the melted ore, forming slag. The furnace walls formed a funnel, which directed the molten iron into the hearth at the bottom. As the molten slag was lighter, it floated above the molten iron and was tapped off first. The furnace would be tapped every 10 to 12 hours, and an average of seven tons of iron was smelted per tap. Every 10 to 12 months, the hearth would be relined.

The company had intended to produce pig iron to ship via wagon to the canal at Pittston and Honesdale. 2 But the price of iron was declining steadily and transportation costs took a toll on the company’s profitability. The partners believed that producing nails would save the company from financial ruin, but the construction of a puddling mill and nail works required additional capital.

Seldon and George Scranton asked Joseph and Erastus Scranton for assistance, who arranged a loan of $20,000 from John Howland of the Howland & Company in New York City. 2 By May 1843, the nail factory was under works 1,000 yards upstream of the furnaces. 1

In September, the partners reorganized under the name of Scrantons & Grant, headed by George and Seldon Scranton and Sanford Grant. 2 During the same year, George and Seldon’s younger brother, Charles Scranton, became the supervisor of operations; George returned to the Oxford Furnace in New Jersey.

The furnace was producing five to seven tons of pig iron a day by 1844. 2 By April, the rolling and puddling mill went into operation.

Nails were manufactured from wrought iron plates, which were converted to cast iron by several reverberatories, or pudding ovens. 1 In the oven, the cast iron pigs were stacked in a slag-lined chamber and reduced to a semi-molten state. The superheated air was drawn over the pigs which caused them to melt. As the carbon burned off, it formed large pasty balls, or blooms. Workers stirred the bloom with a long iron rod tipped with slag, which released excess carbon and helped mix in iron silicate.

After two hours in the oven, the bloom was removed with tongs and taken to a squeezer, where excess slag was forced out. 1 Once squeezed, the wrought iron ingot was reheated and passed between large rolls until it became a flat plate. The flat plate would then be cut into nail rods.

By July, 100 kegs of nails were being produced per day, which flooded the market. 2 Additionally, the nails were brittle and broke too often while being hammered. Faced with mounting debts and declining revenue, the company switched from nail to T-rail production for the railroads.

Seldon and Charles visited the Montour Works in Danville in early 1846 to learn the T-rail production process. 2 George then traveled to New York to find financial backers for the business. While he was unable to find many investors, he came into contact with the president of the New York & Erie Railroad (NY&E). 2 3

The NY&E had a contract to complete a railroad from Piermont on the Hudson River to Binghamton, New York by the end of 1848, or forfeit a $3 million contract with the state of New York. 2 Faced with the uncertainty of the domestic rail supply and the expense of T-rails from England, the NY&E placed an order for 4,000 tons of T-rail to Scrantons & Grant. The railroad inspected the rails in October and was pleased with the quality of the rails, subsequently advanced $90,000 to the company, as well as an additional contract for 12,000 tons of rail.

Scrantons & Grant delivered the rails by mule-driven wagons, which enabled the NY&E to complete the line to Binghamton with four days to spare. 2

Furnace No. 2 and No. 3 were constructed in 1848-49, and in mid-1850, the company began work on the 48-mile Liggett’s Gap Railroad to connect the Lackawanna Valley and the Scrantons & Platt ironworks to the Erie Railroad at Great Bend. 2 By April 1851, the renamed Delaware & Western Railroad was hauling iron ore and coal to the furnaces, and bar iron and T-rail to customers. In 1852, Furnace No. 4 was built.

In 1853, the company reorganized as the Lackawanna Iron & Coal Company (LI&C). 2 3 By 1854, the firm featured three furnaces, the rolling and puddling mills, a foundry, two blacksmith shops, two carpenter shops, a car shop, a sawmill, a grist mill, offices, a company store, a boarding house, a hotel, a tavern, 200 houses, and mines for ore and coal.

The company added two double-connected lever-beam steam engines to power the blasts in the furnaces in 1854. 1 The engines, the largest in the United States, powered large lowing cylinders which produced the blast for the furnaces, eliminating the need for the waterwheel.

The iron ore reserves near Scranton began to be depleted by the end of the 19th century. Because the cost of shipping iron ore into Scranton from the Midwest was high, as well as changing market conditions, the decision was made to move the plant to a site south of Buffalo, New York. 2

Furnace No. 1 was dismantled in 1902 and moved to Lackawanna, but the remainder of the property was sold to the Wyoming Valley Railroad in 1903. 2 The railroad contracted with a Philadelphia company that scrapped all of the equipment and steel and tore down all of the structures except for the stone blast furnaces.

In the late 1960s, the derelict stone furnaces were acquired by the Commonwealth and transferred to the state park system. 2 The furnaces were then moved under the Pennsylvania Historical and Museum Commission in 1971, becoming a part of the Pennsylvania Anthracite Heritage Museum complex. The site was added to the National Register of Historic Places in 1991.

The historic site consists of:

All of the furnaces still contain the refractory brick linings. 2 Furnaces No. 2, No. 4, and No. 5 contain portions of the hearths. 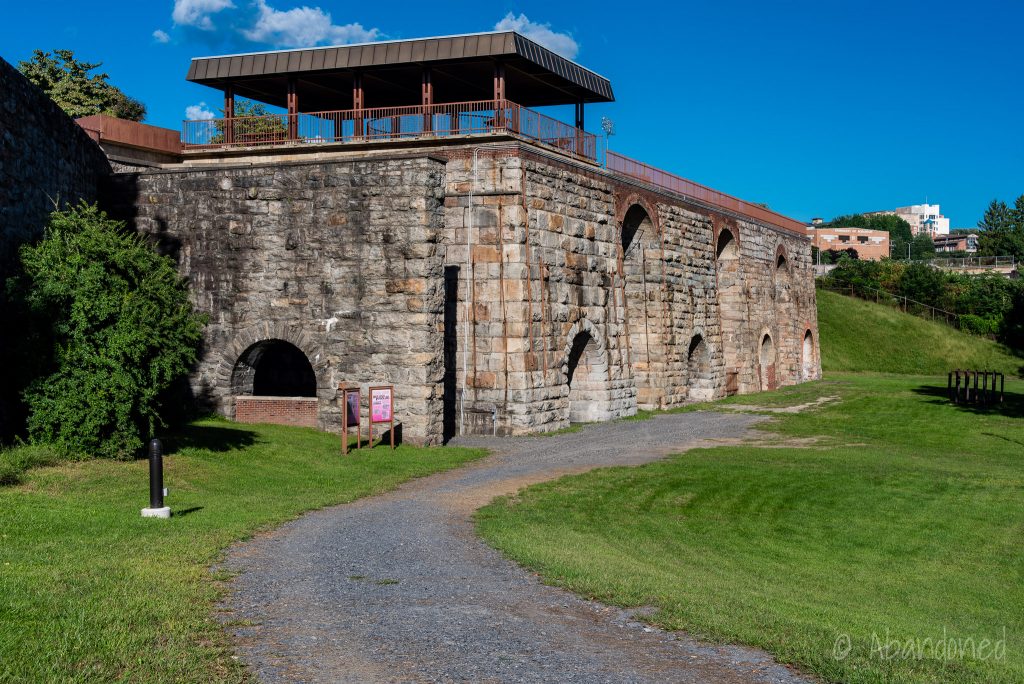 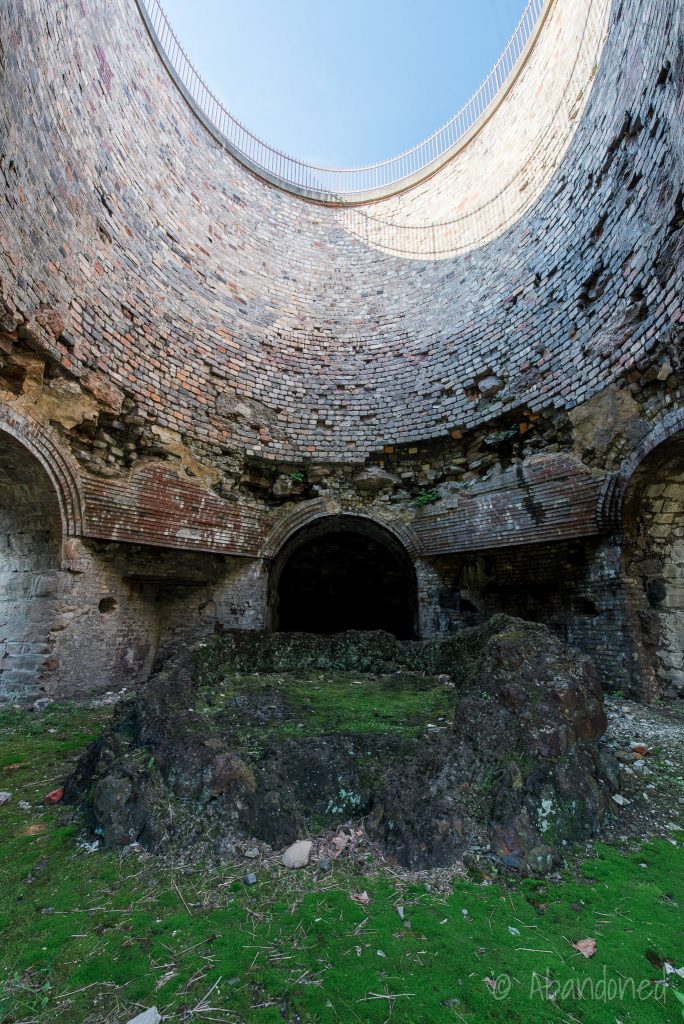 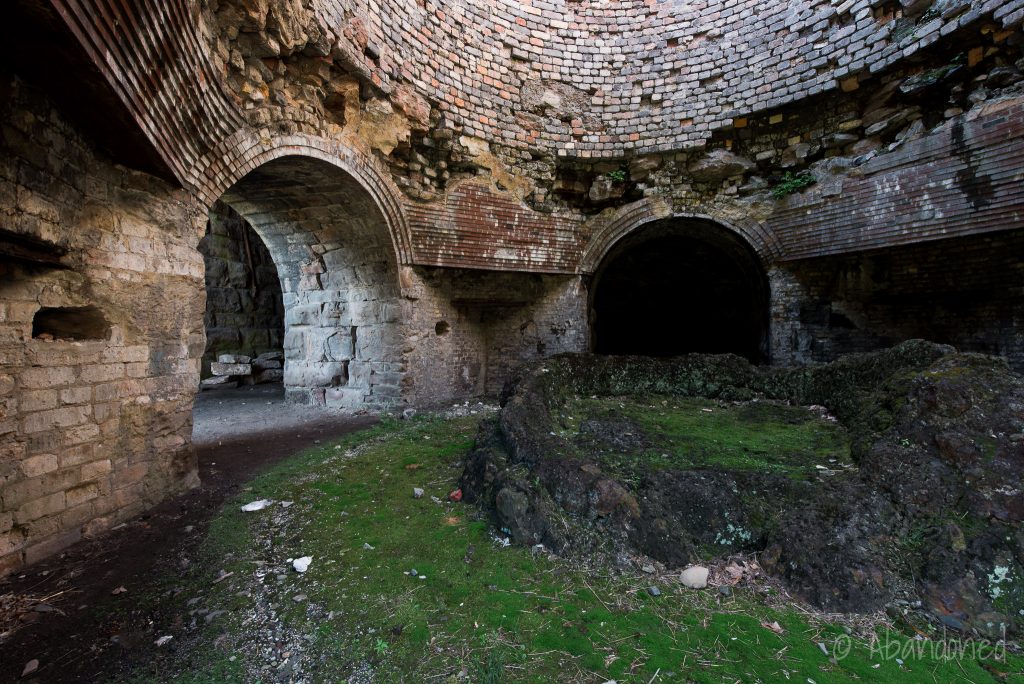 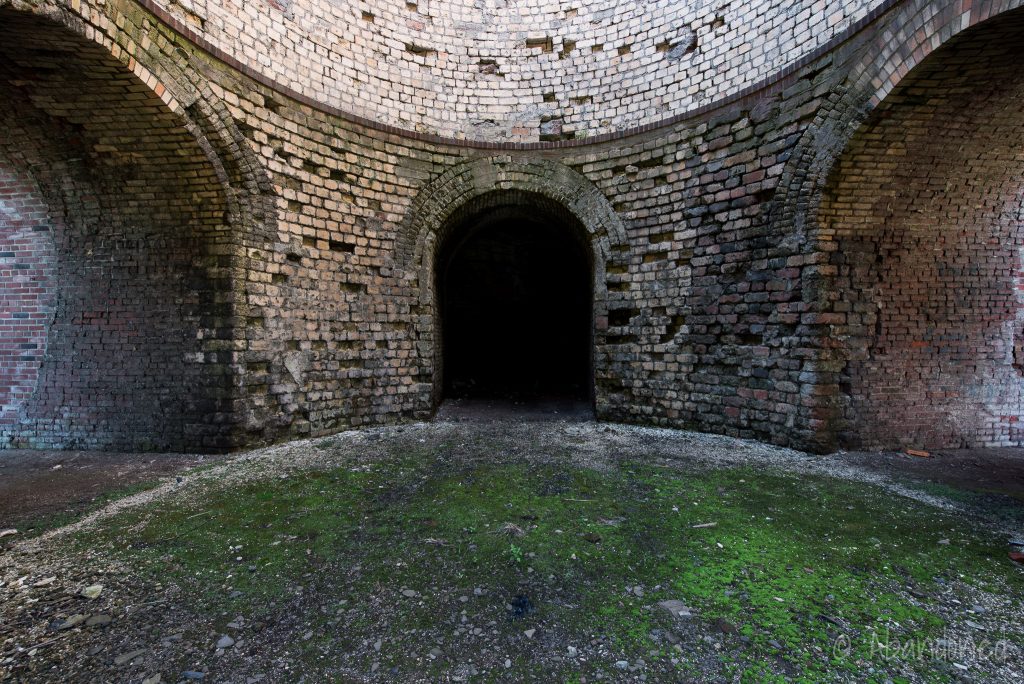