St. Boniface Catholic Church is an abandoned Roman Catholic church in Chicago, Illinois. It was constructed between 1902-04 and closed in 1990. The property is proposed to be converted into residential units and a music school.

St. Boniface Church, organized in 1864 from the territory that had belonged to the German parish of St. Joseph, consisted of German-speaking Bavaria and German immigrants. 1 German families that lived west of the North Branch of the Chicago River found the trip to St. Joseph’s lengthy, necessitating the need for a new facility. Rev. Ludwig Fink, the pastor of St. Joseph, directed the construction of a mission church at Chicago Avenue and Carpenter Street on December 16, 1862.

A committee of nine met with Bishop James Duggan in 1864 to discuss the possibility of forming a parish. 1 Rev. Ferdinand Kalvelage, the pastor of the German parish of St. Francis of Assisi, found that a new facility was warranted. A small frame church was built, topped with a bell donated from Fort Dearborn. The first Mass for St. Boniface was held on March 5, 1865. 1 8

The church requested the Sisters of St. Francis of Mary Immaculate from Joliet to staff the school in 1867. 1 The school expanded to six rooms in 1874, and in 1883, the frame church was enlarged. A three-story brick convent was added in 1885.

As Kashubes (German-speaking Polish immigrants) flowed into the neighborhood, the need for a new school was great. 1 The school’s enrollment had surged to over 1,200 children, and the building was well overcapacity.

The cornerstone for a new school was laid on June 7, 1896. 1 Designed by Henry J. Schlacks, the new 12-room facility was dedicated on September 20.

Design work for a larger church, convent, and rectory began in late 1901 by Schlacks. 1 The cornerstone for the new $110,000 church was laid by Auxiliary Bishop Peter J. Muldoon on September 7, 1902, and the new building was dedicated on June 5, 1904. 3 Although the exterior was complete, the interior was quite bare and took several years to finish.

The convent and rectory opened in early 1903. 1 The Sisters took up residence in the old parish rectory.

German families began moving to newer areas of Chicago in the early 1910s, slowly stripping St. Boniface of its congregation and school enrollment. 1 Those who remained at St. Boniface were reluctant to welcome the newcomers to the neighborhood, which were mostly of Polish and Jewish descent. By 1916, enrollment in St. Boniface School had declined to just 200 children and the church was seeing its congregation dwindle in size.

Rev. Christian A. Rempe, the appointed pastor in July 1916, sought to bridge the gap between the newcomers and the Germans. 1 Rempe studied the Polish language and began outward communication with the congregation, leading Rempe to conduct a sermon in the Polish language on the First Holy Communion Day in 1917.

Congregation numbers dropped following World War II. The advent of the expressway and the rise of automobile usage meant that many families in Chicago could relocate to more spacious neighborhoods in the city and suburbs, leading to a steady decline in Polish families at St. Boniface. The construction of the Northwest Expressway adjacent to the church in the late 1950s led to the demolition of many residences in the neighborhood, leading to a dramatic decline in attendance.

The cheaper housing prices of the neighborhood, partly due to the high vacancy rates, lower housing costs, and the proximity of the highway, led to the influx of Puerto Ricans who spoke Spanish. St. Boniface became the first parish in the area to become trilingual, serving English-speaking, Polish-speaking, and Spanish-speaking Catholics. 1

In preparation for the centennial of St. Boniface on April 5, 1964, new altars were installed at a cost of $27,000. 1 Constructed by the Emil Greco Company in Italy, the marble altars were shipped to Chicago via the St. Lawrence Seaway. The brick exterior was also refurbished, the interior renovated at a cost of $28,000, and the organ rebuilt at a cost of $20,000.

Owing to enrollment declines and financial considerations, St. Boniface School closed in 1983 when it merged with St. Stanislaus Kostka. 2 3 After running years of deficits, the Archdiocese of Chicago ordered 28 parishes to close on June 3, 1990, including St. Boniface. 3

The Archdiocese of Chicago formulated plans to demolish the St. Boniface church, circa 1896 school, circa 1903 convent and circa 1903 rectory in April 1999. 2 Demolition permits were requested by the Archdiocese, although Alderman Jesse Granato put a hold to the permitting on June 2. 8 The city passed an ordinance the day after allowing the city to purchase the St. Boniface property. 2 The ordinance stated that if the Archdiocese was unwilling to sell the property, the city would use eminent domain to acquire the land. The church rebuffed the city’s efforts.

The Archdiocese met with Alderman Walter Burnett Jr., Granato’s successor, in October 2002, announcing that they would sell the former St. Boniface church property to the city. 2 The church requested that the school be demolished out of liability concerns. To appease historic preservationists, the Archdiocese revealed plans in May 2003 to dismantle the school facade and place it into storage. Demolition orders were approved shortly after and work to tear down the school commenced in July. The circa 1903 convent was demolished not long after followed by the rectory in 2011. 9

Smithfield Properties revealed plans for a mixed-use development on the site of St. Boniface in September 2005. 2 Smithfield proposed to renovate the church into residences and construct a high-rise residential building on the former school site. The circa 1903 convent would be demolished. The proposal was declined by the church in June 2007.

The Coptic Orthodox Church also expressed interest in St. Boniface. 2 Coptic proposed renovating the church for their congregation but their requests to meet with the Archdiocese were ignored. The Archdiocese claimed Coptic had no funding to rehabilitate the church building despite Coptic providing evidence to the contrary.

It was unveiled that an agreement was reached between Institutional Project Management (IPM), the Archdiocese and the city for a complicated land swap. 2 The deal, approved in April 2010, involved the city of Chicago acquiring the vacant Byrd School (at 363 West Hill Street) from the Chicago Public Schools and subleasing it to the Archdiocese. The Archdiocese then relinquished St. Boniface to the city who then leased it to IPM. IPM, through its sponsor, St. Boniface Senior Living Foundation, 9 became the new owner of St. Boniface on October 20. 2

IPM’s plan involved demolishing most of the St. Boniface, incorporating only the south and west facades with a new structure behind it for 75 senior citizen apartments. 2 Phase one of the project would begin in the fall. Phase two would include 40 to 50 units to be built in a separate structure at a point in the future.

The proposal was shelved in June 2011 when IPM revealed that due to inaccurate engineering analyses, the original plan of preserving the four towers of St. Boniface would not possible due to a lack of steel support inside the building. 2 Securing the towers during the selective demolition process was possible from an engineering standpoint but was financially prohibitive. A revised plan included saving the entire church building for use as 41 apartments and the construction of 43 apartments in a new building on the former school site.

Struggling to find funding for the project after the Illinois Housing Development Authority (IHDA) declined to award historic tax credits to IPM, the company relinquished control of the project to the Carefree Development Company in January 2013. 2 Carefree was also denied tax credits by IHDA in December. The idea of converting the property into senior citizen apartments was scrapped in July 2014.

A new plan by Carefree was released in January 2015 that included the partial demolition of the church and the construction of 56 apartments behind the facade in a new structure. 2 All four towers and the south-facing facade would be saved. An additional 56 residential units would be built on the site of the former school. The project was never initiated due to financial considerations.

In early 2016, the city ordered Carefree to either repair the church building or demolish it. 5 Despite interest from the Chicago Academy of Music (CAM) on renovating the church building on April 21, 2 5 the city issued a demolition permit on July 22. 6 7 The permit was put on hold after Brian Duggan of Guardian Capital acquired the debt for the building from the bank that held the mortgage. 7 Duggan wanted to tear down the church for single-family residences.

With the demolition on hold, CAM partnered with STAS Development to purchase the church property on September 23. 2 4 STAT’s proposal includes the construction of 15 condominiums within the church building, 24 apartments in a new four-story building on Chestnut Street and a new four-story building on Noble Street for CAM. 4 The CAM building will include a performance hall, classrooms, recording facilities and student and faculty housing. 9 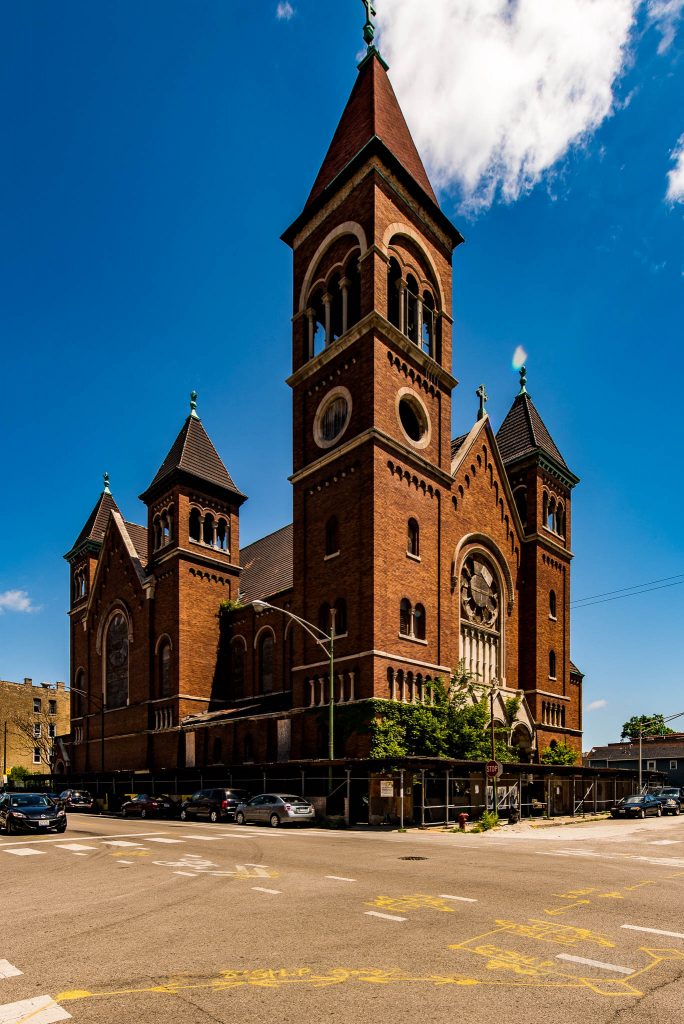 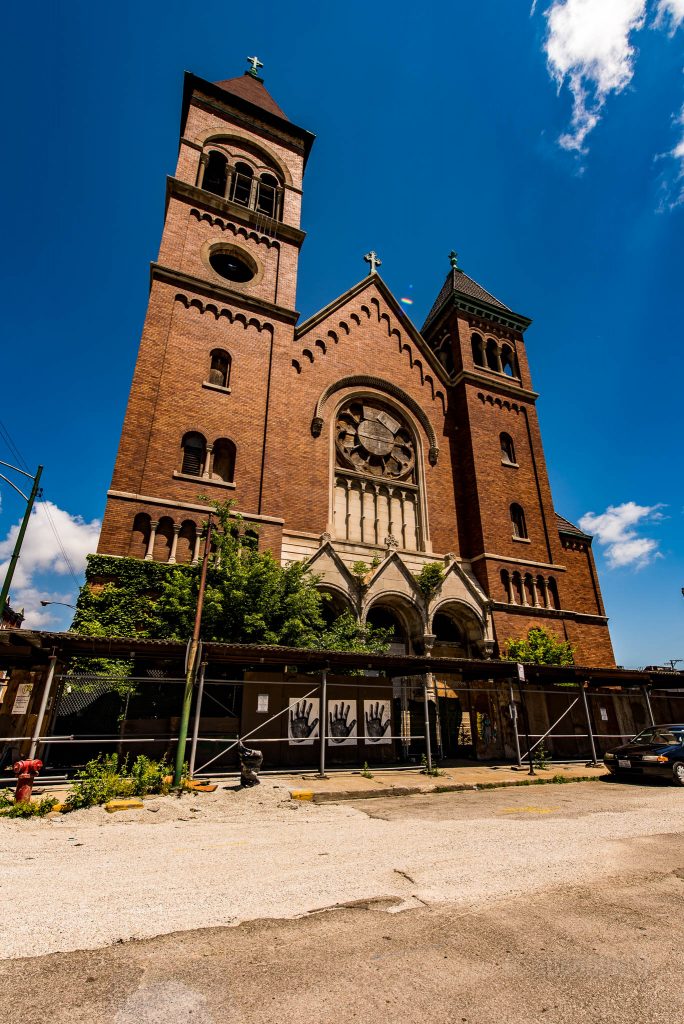 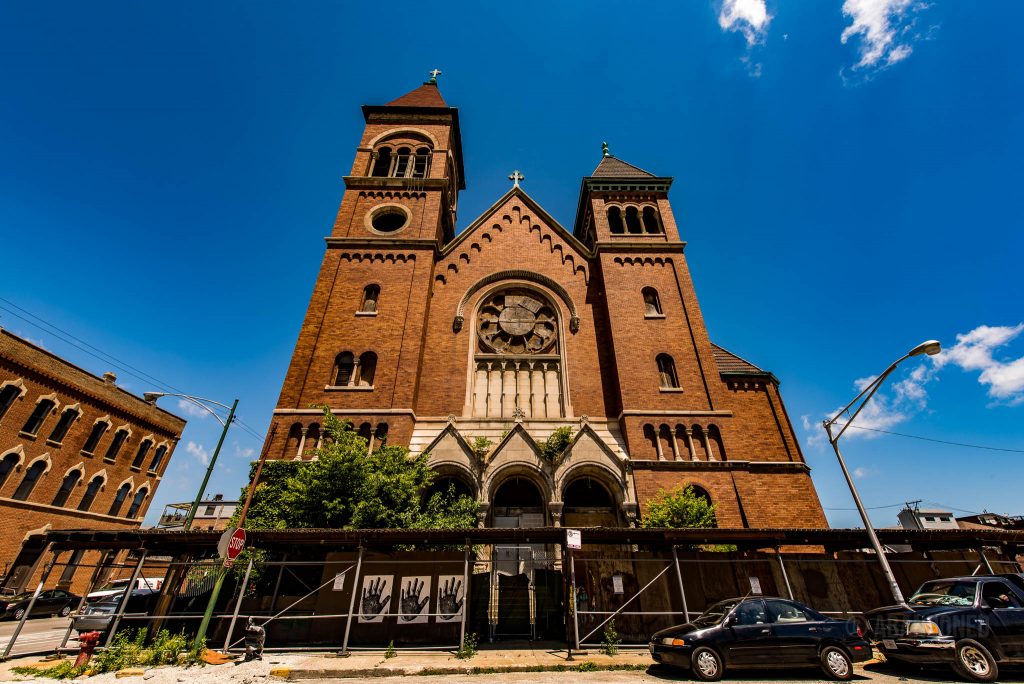 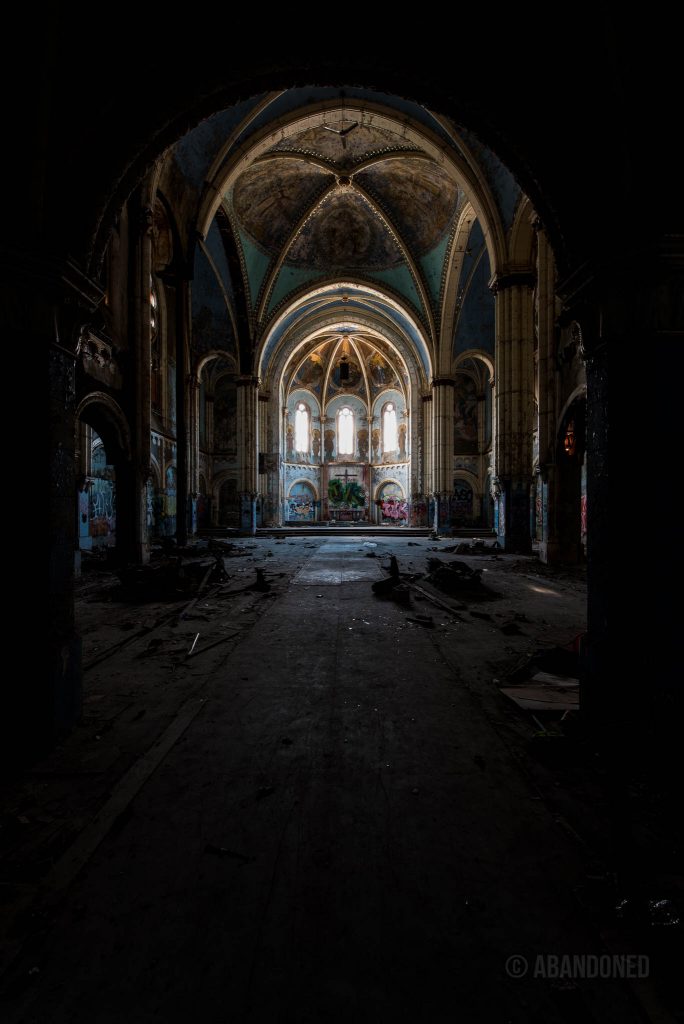 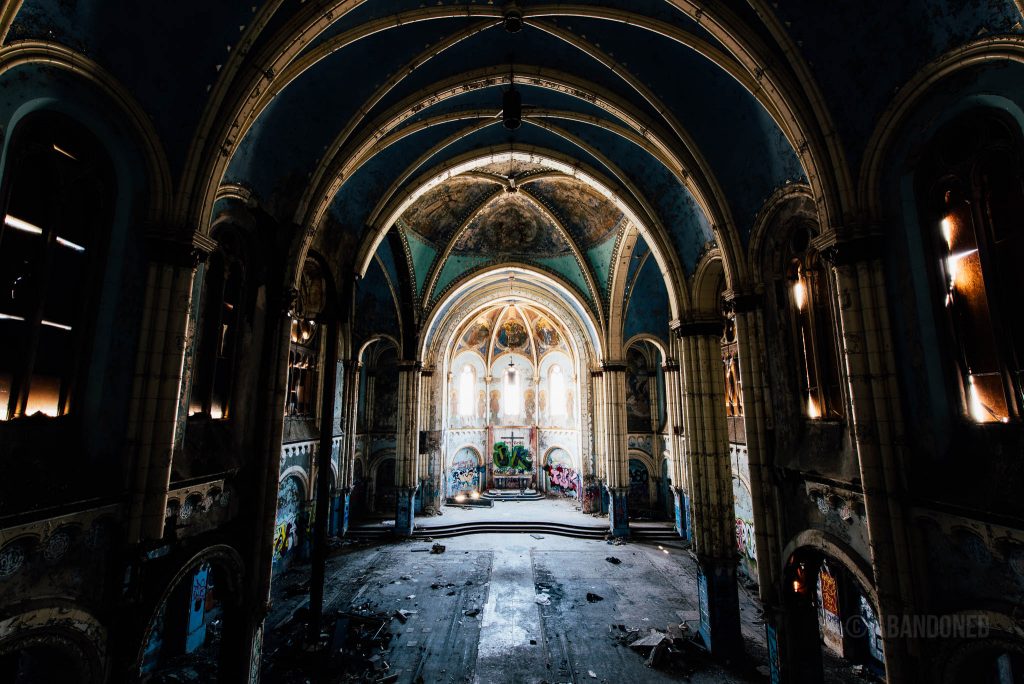 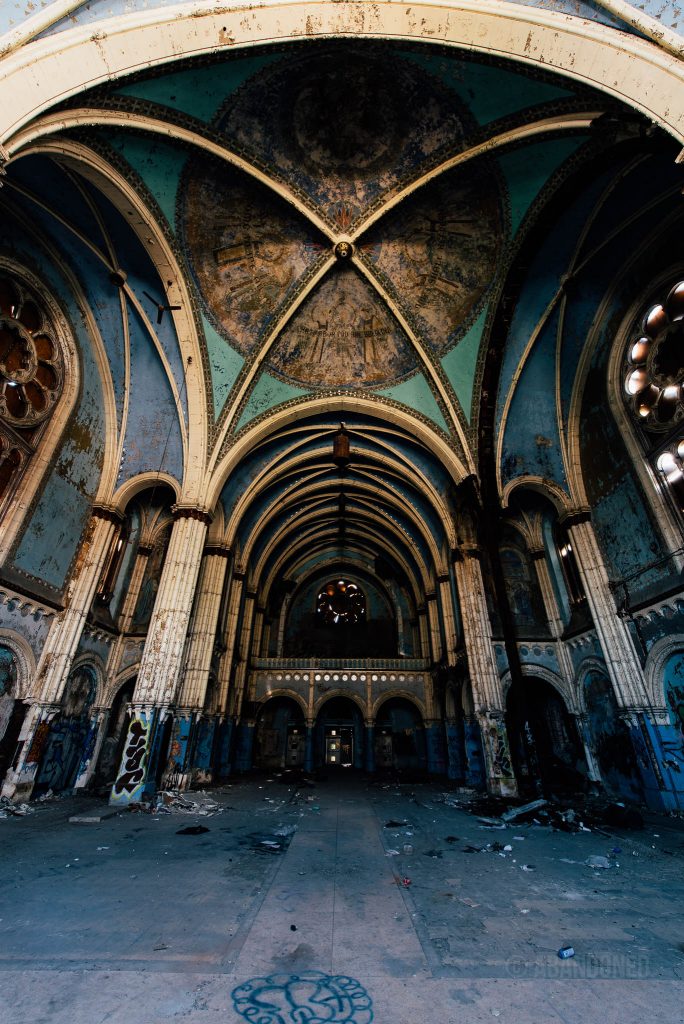 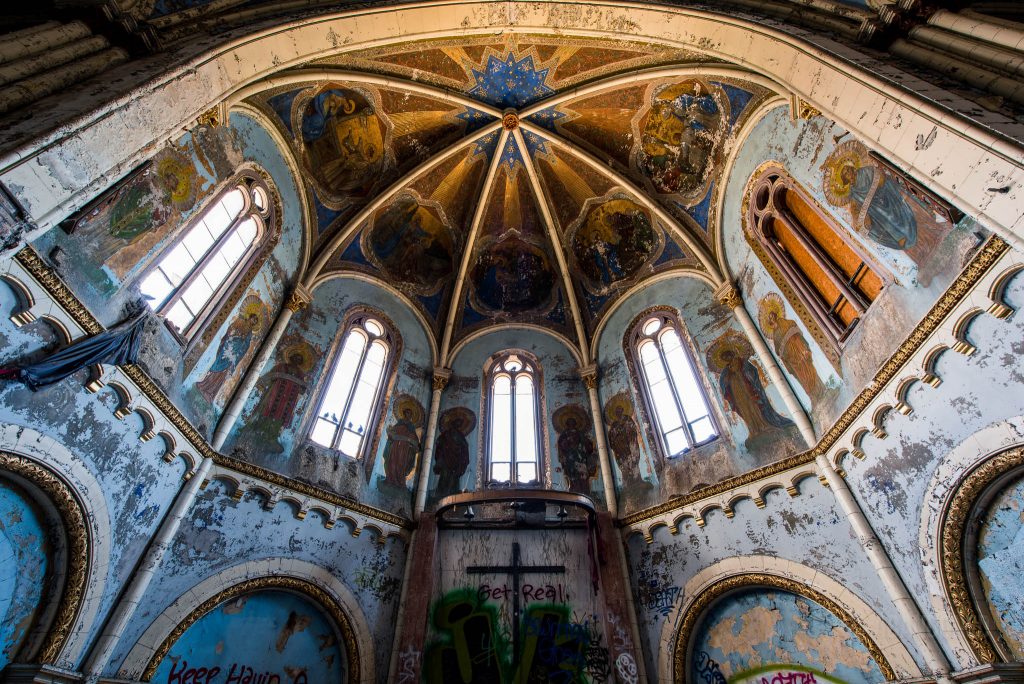 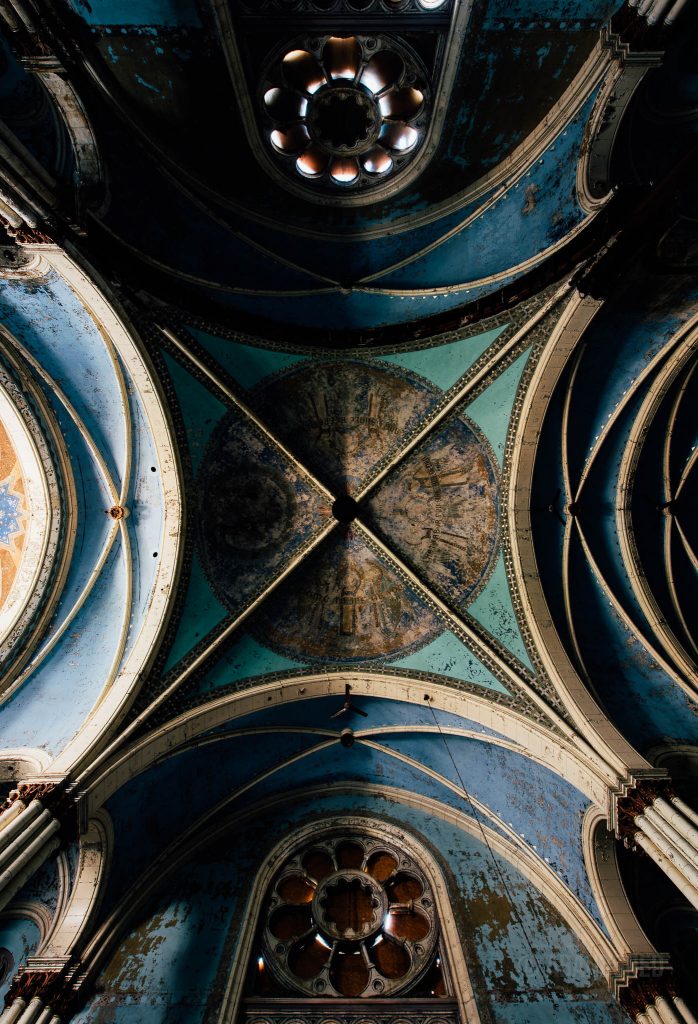 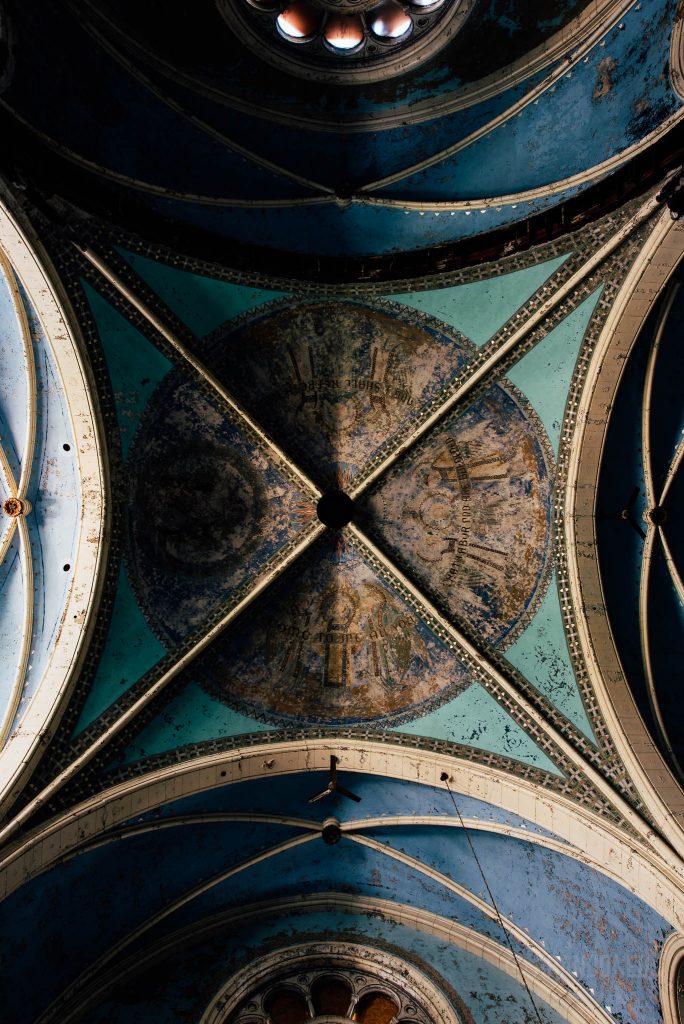