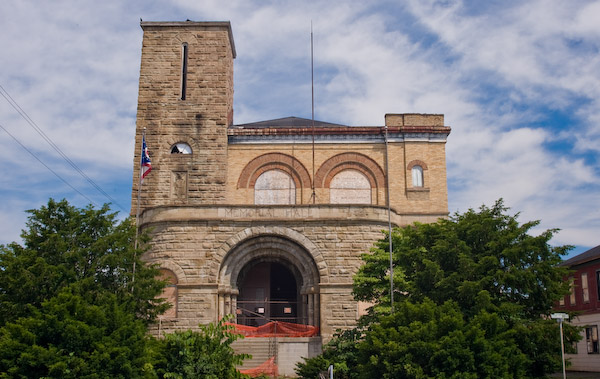 That is the understanding, pending a structural analysis that is being conducted today. Memorial Hall, a memorial to Civil War veterans, was completed in the Iron City in 1892. It was gutted by fire in 1905, rebuilt and served as a library, city hall and jail before closing in 1996.

A deteriorating roof, floor joist and stairs led to the building’s abandonment.

During the time of its closure, Joe Unger, a local businessman, proposed that the building be restored for use as a veterans’ home. But in 2007, a violent thunderstorm, combined with a sudden drop in barometric pressure, caused a vortex to form inside the building which compromised the front entryway. A structural assessment was completed soon after, and while the exterior walls were noted to be in good condition, the interior was “in dire shape.”

At any rate, the interior would require gutting because the wooden joists that hold up the floors were rotting due to extensive water damage. Other ailments of the building included a roof in disrepair, asbestos and lead paint.

In 2008, an architectural firm presented a plan to demolish the interior of Memorial Hall, install steel bracing for support, and convert the building site into a park with a stage for a cost of $240,000. The bracing would also be load-bearing, so that in the future, floors could be constructed – at a cost of $3 million to $4 million.

On November 24, 2008, the American Legion Post 433, along with other veterans groups, joined forces in an attempt to save Memorial Hall. The post sought the support of other veterans groups, and hosted several fundraisers and events. A Veterans Memorial Hall Restoration Fund non-profit was founded for the specific purpose of restoring the property.

The post had hoped to receive a grant for $2.4 million by the federal government ro restore Memorial Hall, but in order to obtain the grant, the non-profit would need to own the building. The city had planned to transfer the building to the Ironton Port Authority, who would have then transferred it to the non-profit but only on the condition that it could raise $500,000 towards the restoration within two years.

End of the line for the Oakley station

There is more unfortunate news from Cincinnati, Ohio, and this time it involves the former Marietta & Ohio Railroad train depot in Oakley. Reported from the Cincinnati Enquirer, the station was pu…
END_OF_DOCUMENT_TOKEN_TO_BE_REPLACED
Category NewsPosted on September 16, 2019