Nuttallburg, West Virginia is located along the New River in Fayette County and was a coal mining venture that was spawned out of England-born entrepreneur John Nuttall. Nuttallburg became the second mining town in the gorge to ship “smokeless” coal, with the last mine closing in 1958.

Nuttallburg, West Virginia is located along the New River in Fayette County and was a coal mining venture that was spawned out of England-born entrepreneur John Nuttall. Nuttall, with the assistance of in-laws, opened mines in western Pennsylvania and in 1870, began acquiring land along Keeneys Creek and along the New River in anticipation of the completion of the Chesapeake & Ohio Railway (C&O) from Richmond, Virginia westward. He had eyed land namely for the rich coal seams and when the C&O was completed three years later, Nuttallburg quickly grew – becoming the second mining town in the gorge to ship “smokeless” coal.

Nuttall’s first mine was at the confluence of Kenneys Creek and New River and opened in 1870; a second mine was opened in 1874 adjacent to Short Creek and was named the Nuttallburg Mine. It was only the third mine in the New River valley to open and the two at Nuttallburg were operated by the Nuttallburg Smokeless Fuel Company. A conveyor connected to a wooden tipple stood over a side track adjacent to a long bank of coke ovens for the first mine; the second mine was different in only having a rail line that curved down to the side track to service the coke ovens. The conveyors were twin “monitors,” or cylindrical tubes with a door at one end that was shut closed with a steel bar. When the monitor reached the tipple, the bar was tripped and the door was opened, emptying it of its coal. The 80 coking ovens that were located west of the tipple were idled around 1919.

Below: The remains of some 40 coking ovens out of the 80 that once existed.

In 1920, Henry Ford of the Ford Motor Company, attempted vertical integration, or the control of all aspects of production, from the sourcing of raw materials to the manufacture of the finished good. Ford, through his Fordson Coal Company, acquired the mining rights of the Nuttallburg Smokeless Fuel Company in an attempt to secure a stable coal supply for his steel mills in Deerborn, Michigan. Coal from Nuttallburg was shipped via the C&O and the Ford-owned Detroit, Toledo & Ironton Railroad (DT&I), and Fordson – operated by Ford’s son, Edsel, invested heavily into Nuttallburg.

After visiting Nuttallburg in early 1921, Ford opted to close the Nuttallburg Mine, the second mine that had opened in the town, due to a lack of profitability. The mine was closed from October 1921 through November 1922.

A new tipple was built in 1923-24 by the Roberts and Schaefer Company of Chicago and a new conveyor was constructed in 1925-26 by the Fairmont Mining Machinery Company of Fairmont, West Virginia. The tipple consisted of three tracks that served the C&O. The inner track was for fine coal; the middle track was for intermediate coal grades  the outside track was for larger lump coal. A house coal hopper was located for Nuttallburg’s residents for cooking and heating.

Below: The stabilized tipple and conveyor.

The headhouse, located at the entrance to the mine above the town along a mine bench, was also rebuilt in 1925-26. Loaded coal cars left the mine and entered the headhouse where the cars were weighed. Miners were paid based on the weight of coal they mined. Afterwards, the coal was dumped and transferred to a 1,385-feet long “button-and-rope” conveyor – one of the longest conveyors ever constructed. An electric motor started the conveyor, but the weight of the coal, pulled downward by gravity and governed by sprockets and gears, provided power afterwards. A heavy wire “rope” with iron disc “buttons” spaced at four-foot intervals moved coal at 80 feet-per-minute and could process 125 tons of coal per hour. The innovative “button-and-rope” conveyor also reduced the fragmentation of the coal.

Below: The headhouse photographed from the hoist house, where machinery was located at that operated the mountain haulage. The lined moved workers and supplies between the headhouse and mine, and the valley. 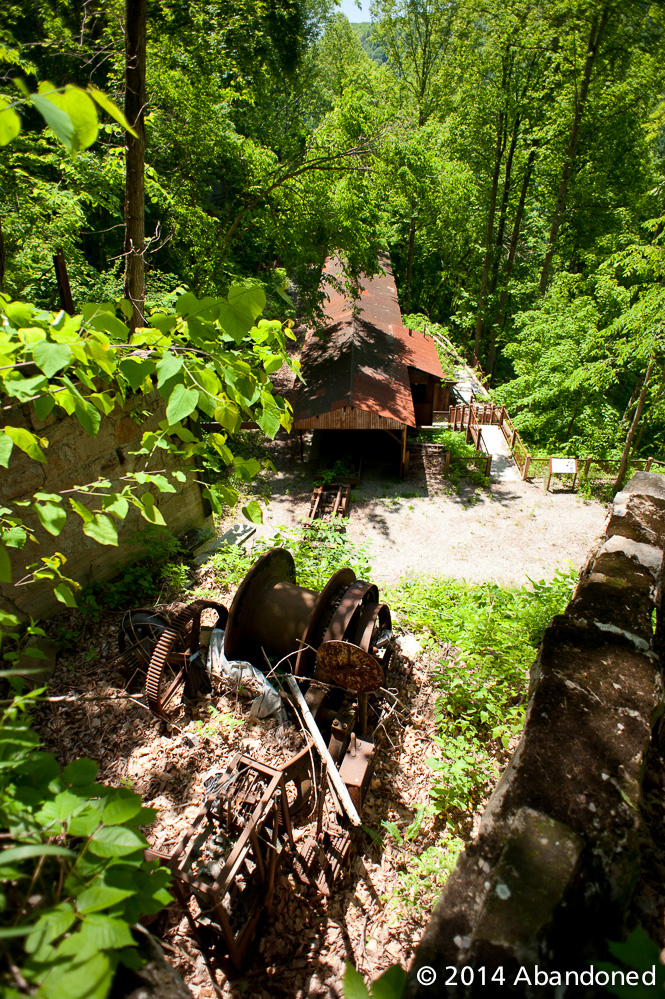 Below: The sand house was where dry sand was stored. The sand was spread on tracks to provide traction during inclement weather. 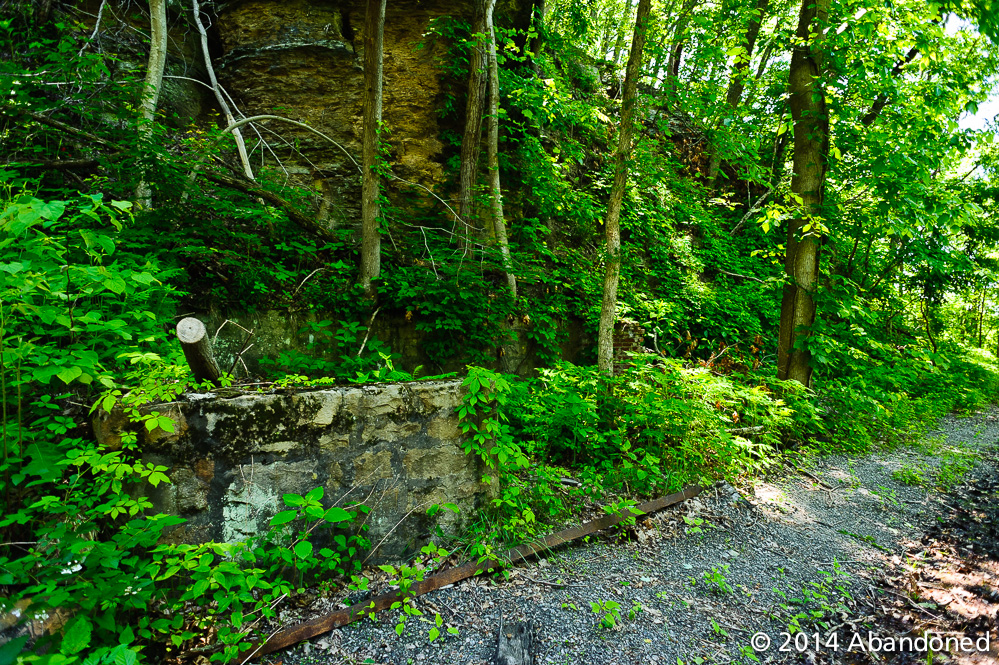 Below: Mining cars at the front of the headhouse. 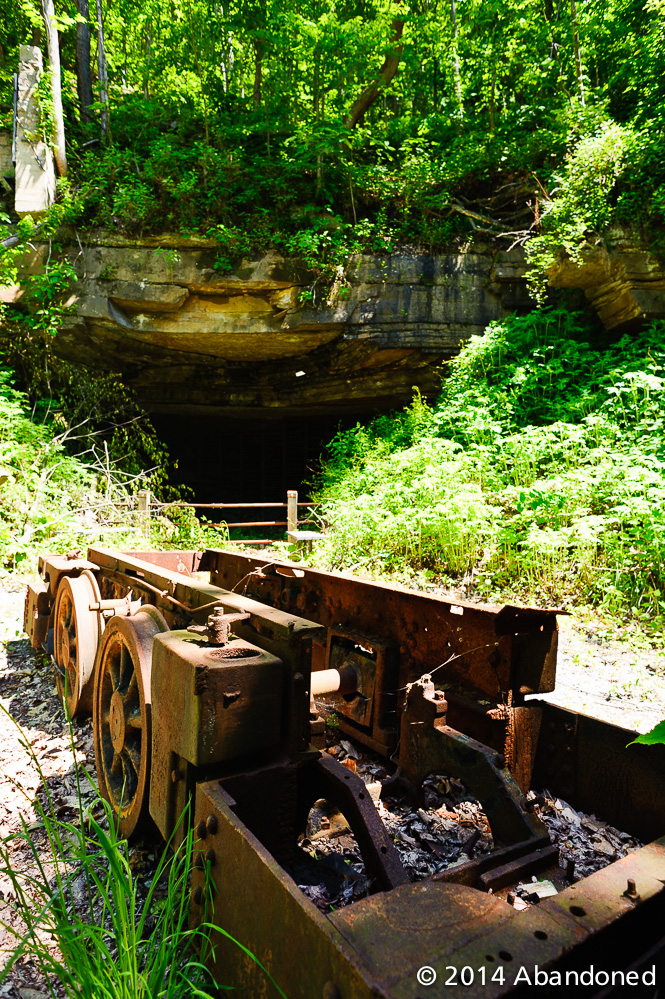 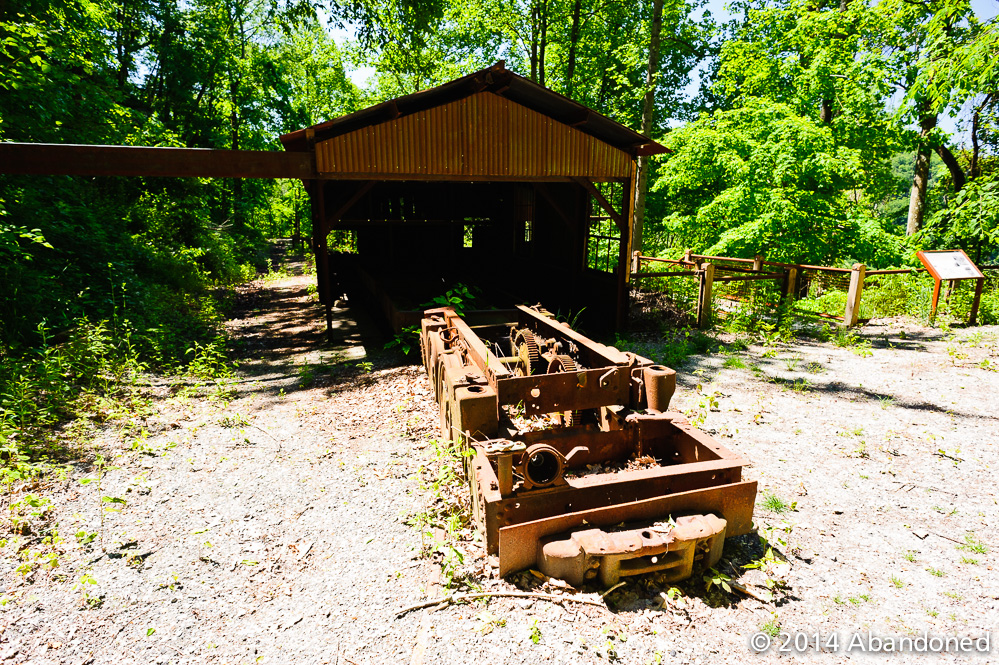 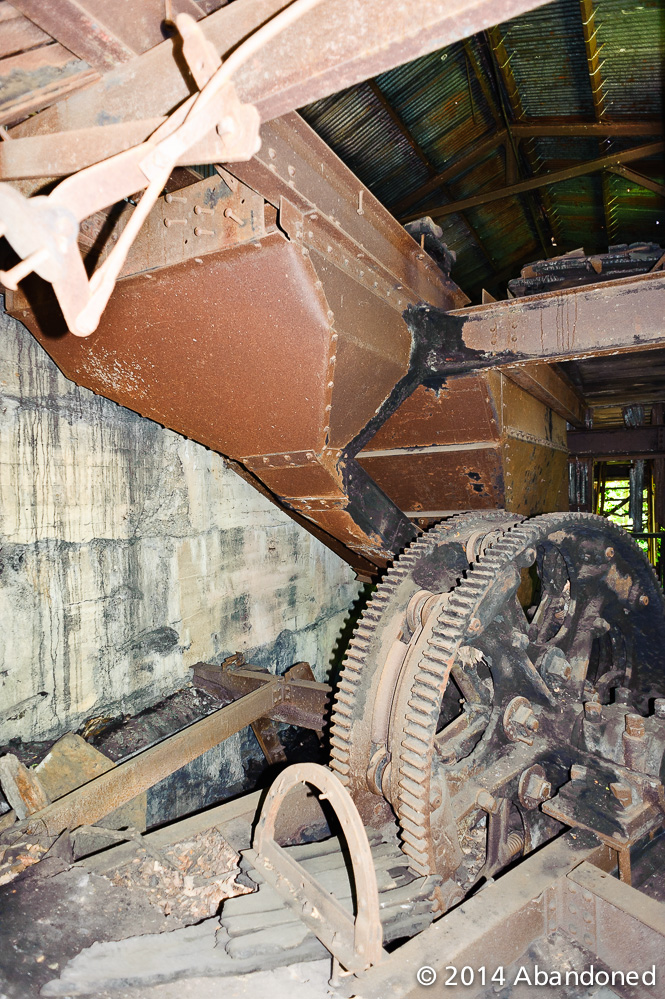 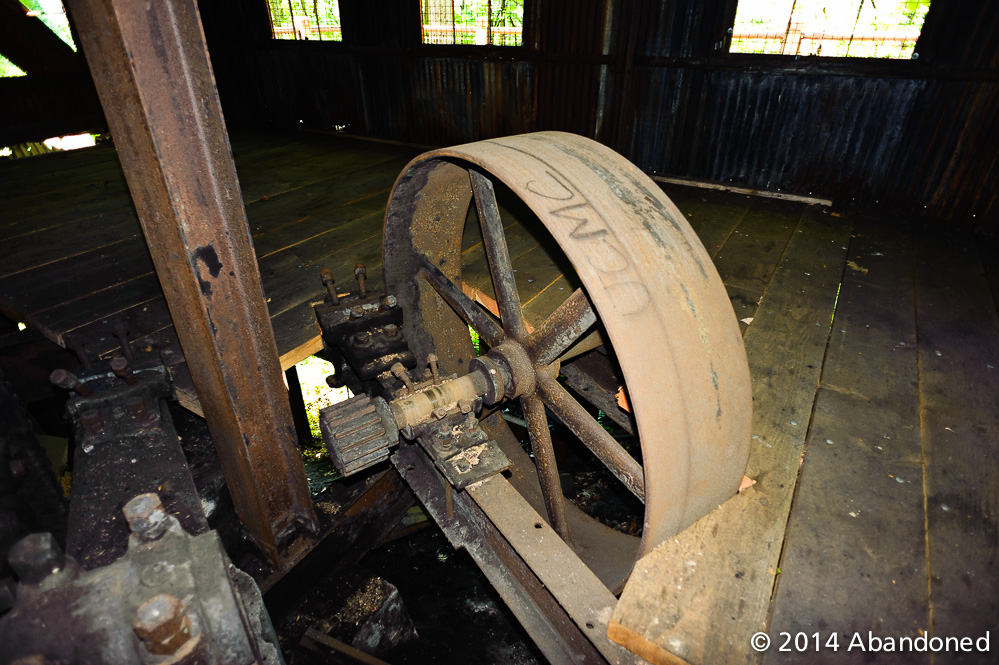 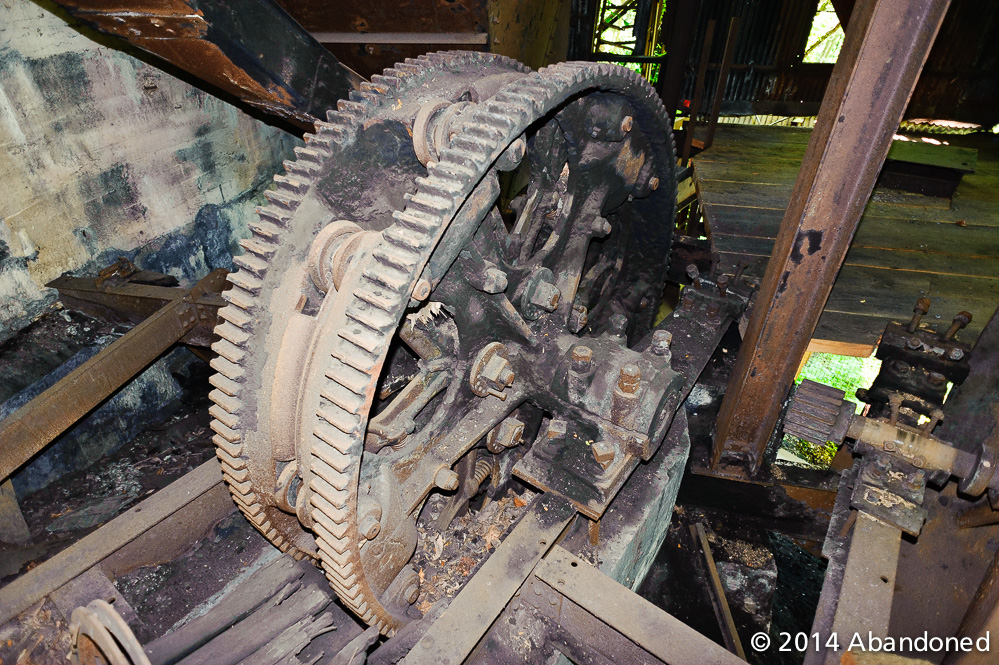 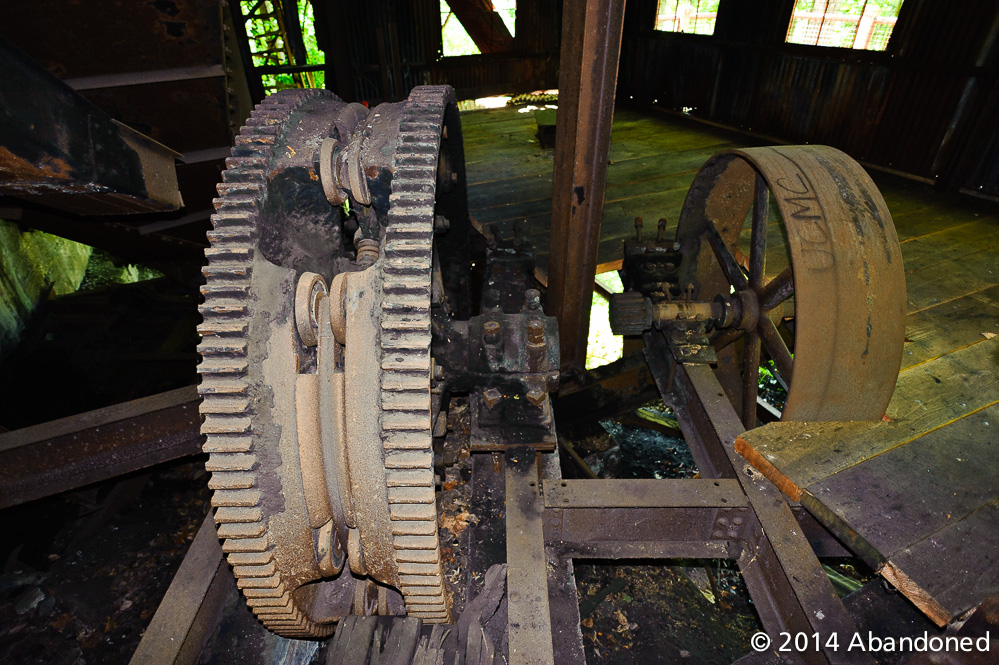 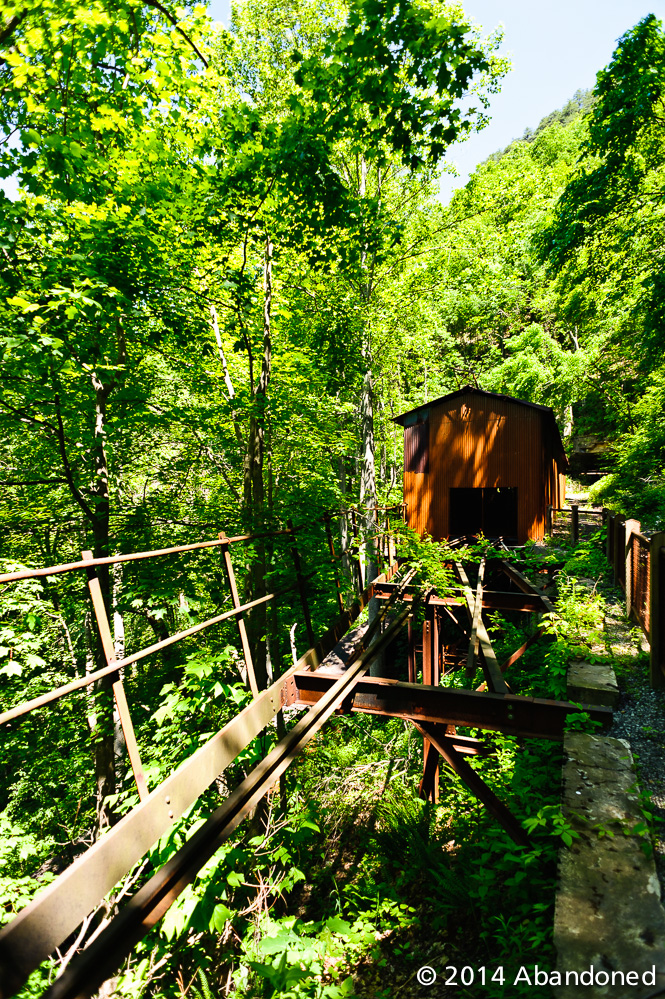 The investments by Ford paid off. Prior to the mining improvements, Nuttallburg produced 50,923 tons of coal in 1921 and only 10,665 tons for a six-month period in 1923. After 1924, it approached 90,000 tons and peaked at 240,820 tons in 1925. The vertical integration experiment, however, began to unravel when Ford could not control or purchase the C&O. There were also restrictions with the DT&I imposed by the Interstate Commerce Commission and the Railroad Association in regards to the distribution of coal cars. Ford sold his interests in the Nuttallburg mines in mid-1928 to the Maryland New River Coal Company.

Between 1945 and 1955, a fan house was constructed by the Maryland New River Company, which ventilated the mine of dangerous gases. The fan drew air through the mine and released it through an exhaust hood. In 1952, a steel and timber Belknap Chloride Washer for washing coal was constructed on the west side of the tipple, and the Marcus Screen Drives were replaced.

In 1954, the mine was sold to the Garnet Coal Company and the post office closed shortly thereafter. Four years later, mining ceased at Nuttallburg. In 1962, the C&O retired the Nuttallburg depot.

Below: Remains of the general store.

Below: A suspension bridge once linked Nuttallburg to South Nuttall across the New River.

In 1998, the Nuttall family transferred ownership of Nuttallburg to the National Park Service (NPS) for inclusion in the New River Gorge National River. The town and its mining structures was inventoried and documented in 2005 and listed on the National Register of Historic Places. The NPS completed a multi-year project that included stabilizing existing mining structures. Today, Nuttallburg is regarded as one of the most intact examples of traditional coal mining in West Virginia.

For more on Nuttallburg’s history and an expanded photograph gallery, click through to Abandoned’s most recent update »