Along Grand River Avenue in Detroit, Michigan were several large and notable shopping districts which have fallen by the wayside.

The Grand Meyer neighborhood is centered on the Grand River Avenue corridor and borders a former shopping district along Grand River Avenue at Oakman Road. Due to racial tensions that cumulated in violent riots, industrial restructuring, the loss of thousands of jobs in the automobile industry, and rapid suburbanization in the middle of the 20th century, Detroit began to rapidly contract. The city’s population peaked at 1.85 million in 1950 and by 1970, it had dropped to 1.51 million.

The Sears, Roebuck & Company department store along Grand River near Oakman opened on June 13, 1928, 7 on the site of a former Detroit Lumber lumber yard and a used truck and parts business. 9 The two-story Art Deco-styled store, with a 63-foot-high enclosed 60,000-gallon water tower for fire protection, was designed by the Nimmons, Carr & Wright of Chicago. 8 The first floor featured men’s and boys’ clothing, dry goods, silks, jewelry, and silverware, while the rear had a soda fountain and luncheonette. 7 Women’s wear and the infants’ goods were on the second floor, along with offices and a cashier’s office. The basement contained sporting goods, hardware, paints, electrical equipment, and automobile tires and accessories.

In 1976, the city proposed a $1 million plan to revive the ailing Grand River-Oakman shopping area with trees, benches, and a steel and plexiglass canopy over the sidewalks. 12 It would have included a pedestrian bridge over Grand River to connect the Sears with Federal’s. The closure of Sears put the project on hold.

Sears sold its shuttered Grand River and Gratiot Avenue stores to King Lopatin Associates for $600,000. (The Sears on Gratiot opened on the same day as the Grand River location and closed in January 1976.) 11 The company then announced on June 5, 1978, that it would provide $350,000 in startup funding to convert its recently closed Sears store into the Oakman Mall. The urban shopping center, to be owned and managed by King Lopatin, was projected to cost $2.5 million. Funding would be sourced from a $660,000 federal grant and $1.5 million in private financing, 14 with the mall open by June 1979. 11 Sears would lease space in the new mall and sub-lease to several small operators that usually run leased concessions in Sears’, such as an optometrist, beauty salon, and an automobile service business. There would be a total of 30 to 40 tenants, including an 8,000 square-foot drugstore, state, county, and local government offices, restaurants, and doctors and dentists offices. 14

The city spent $1.3 million on streetscape improvements along Grand Avenue and Oakman in 1981. 13 Ultimately, King Lopatin was unable to secure private funding for the Oakman Mall project, partly because Sears was slow to provide its startup funding commitment for the project, bureaucratic delays, 13 and because the cost of the project had blossomed to $7.5 million. 15

The project was officially canceled in October 1983, a victim of similar circumstances that also killed the proposed Cadillac Mall for downtown. 13 The Sears store, at that point vandalized and deteriorated, was demolished in early December. 16 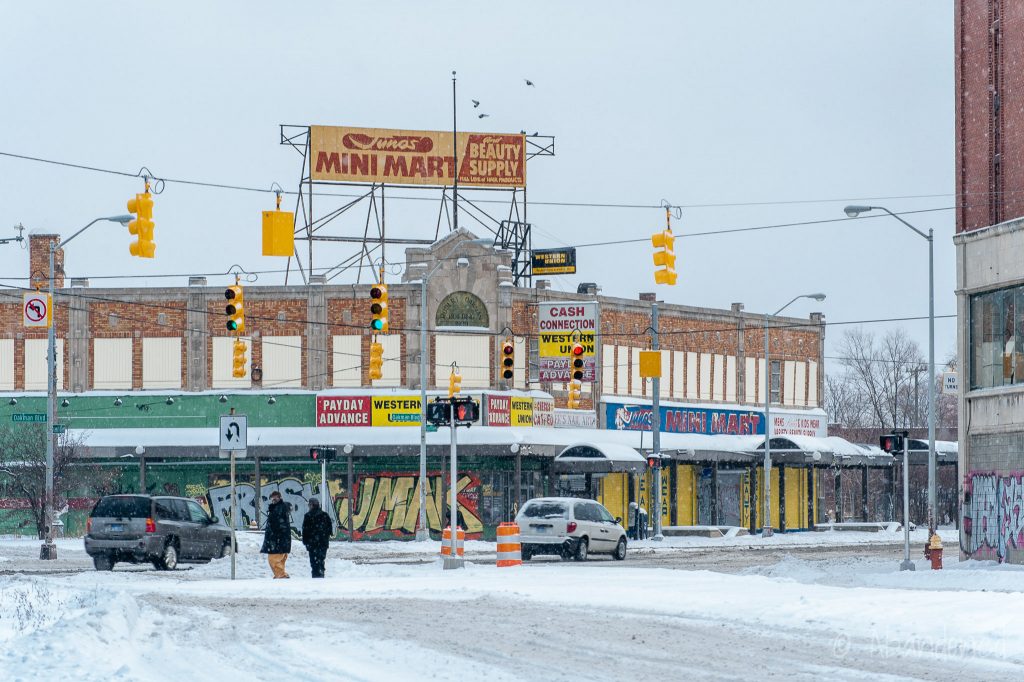 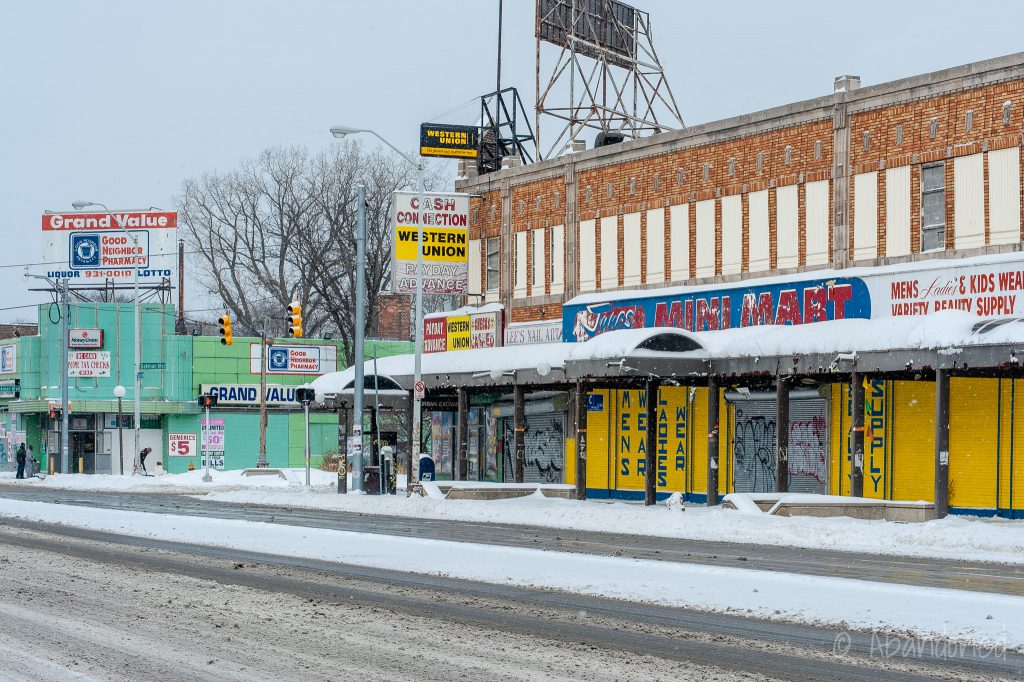 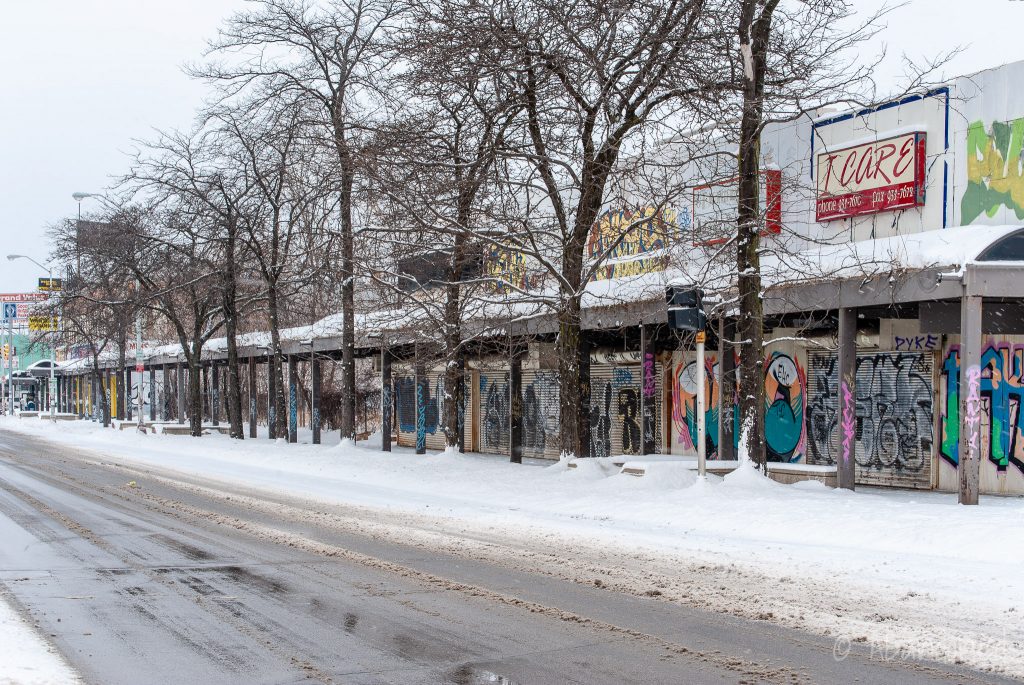 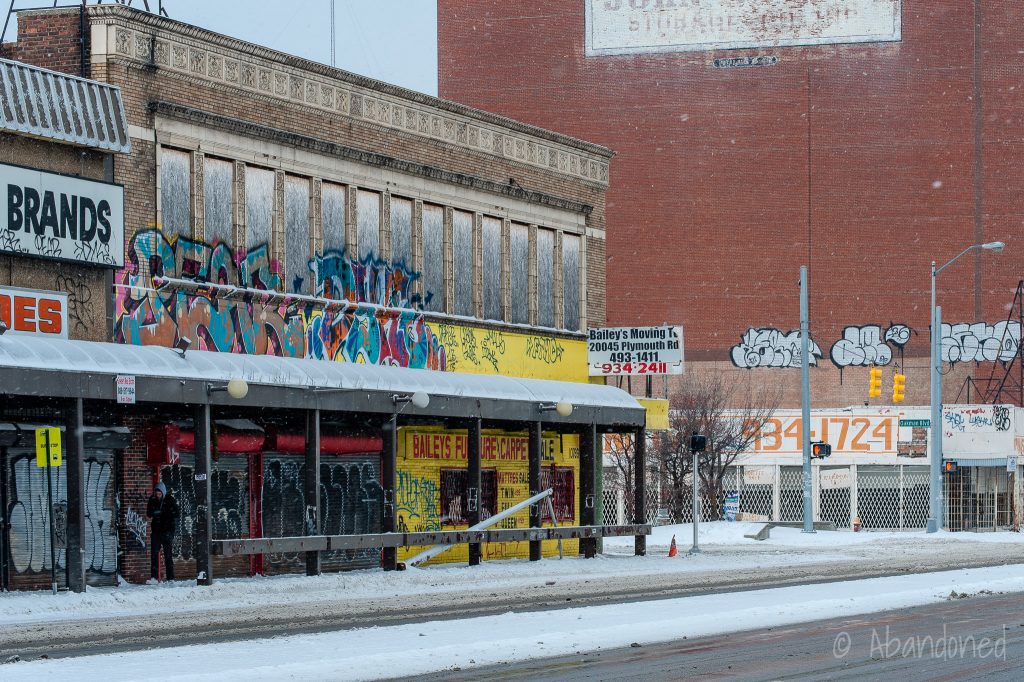 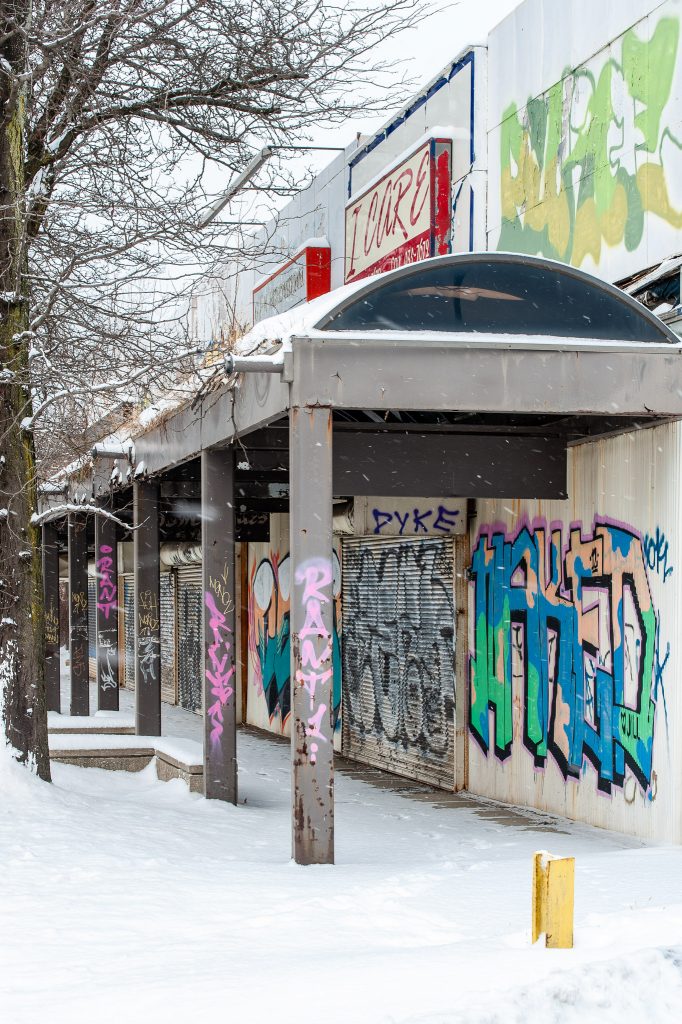 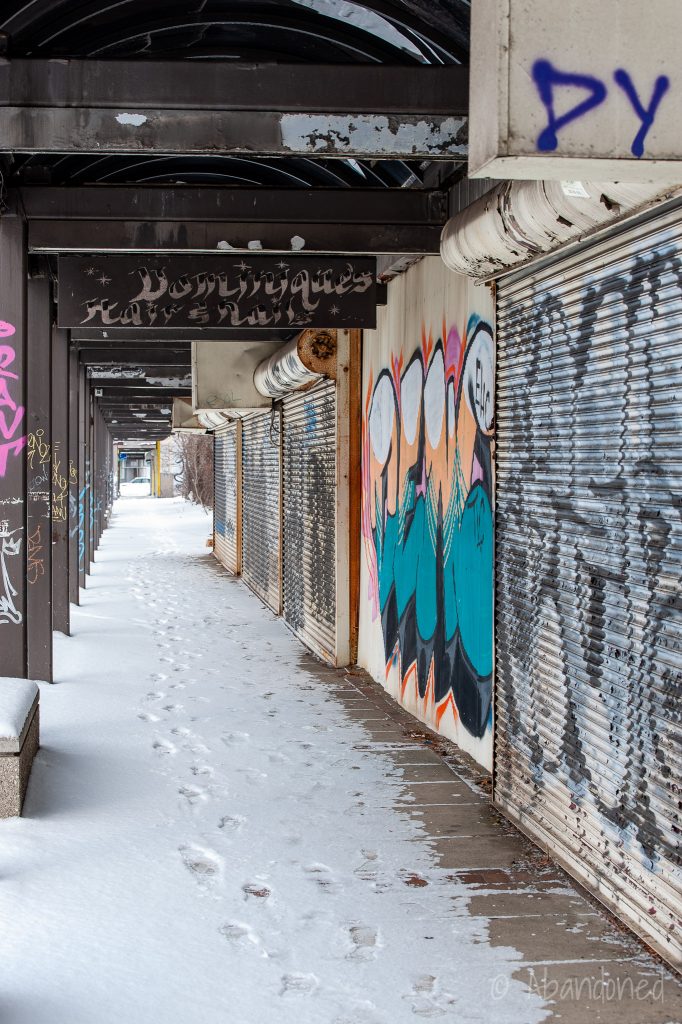 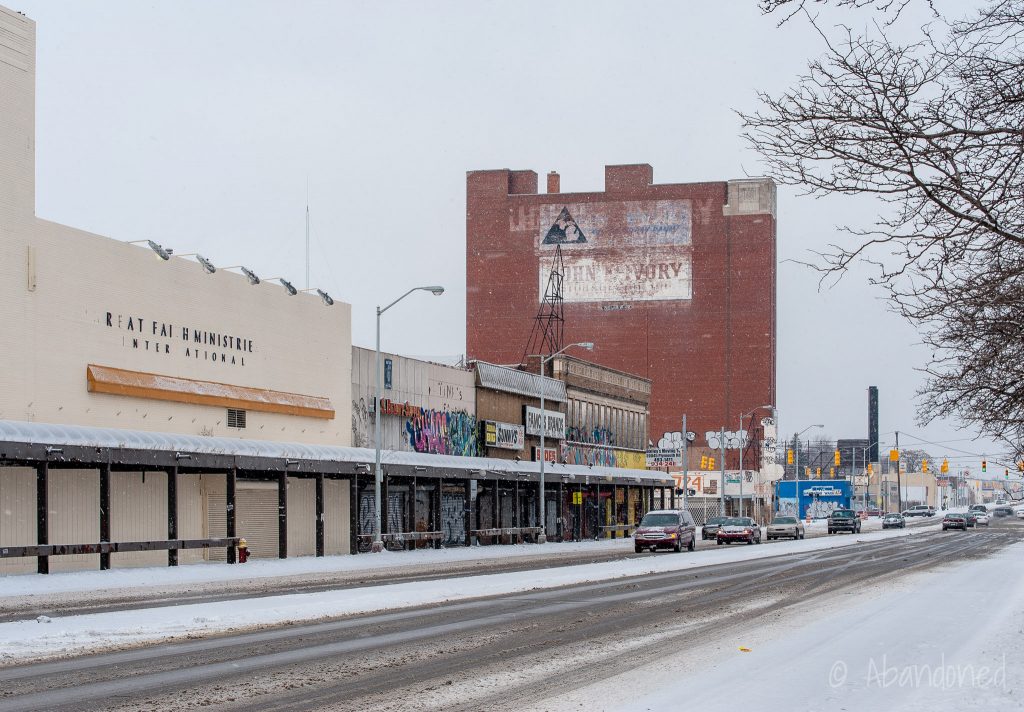 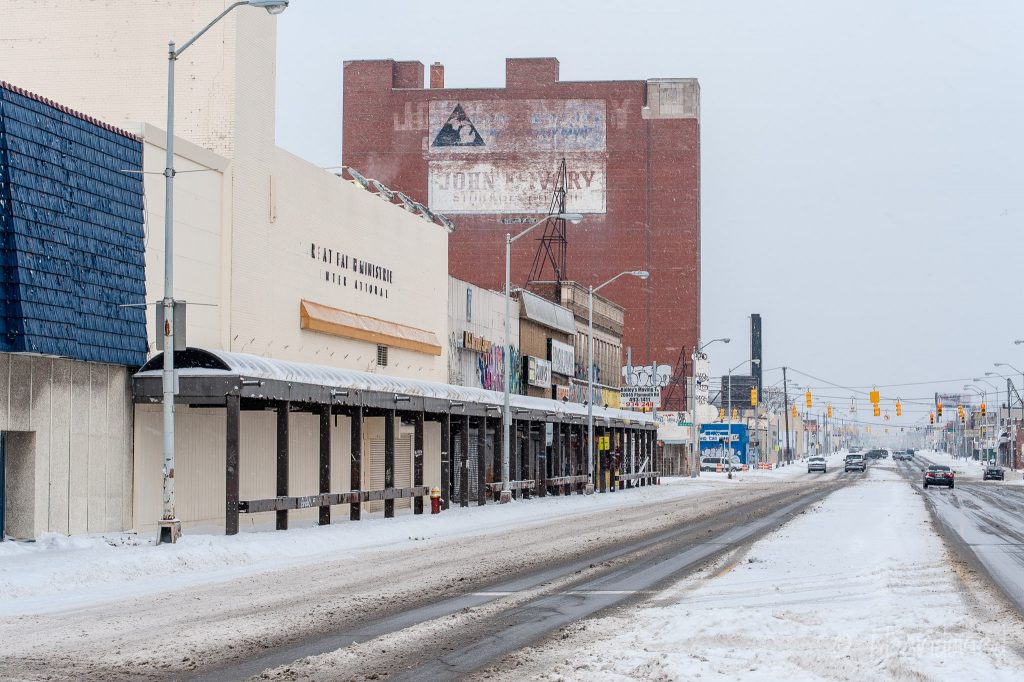 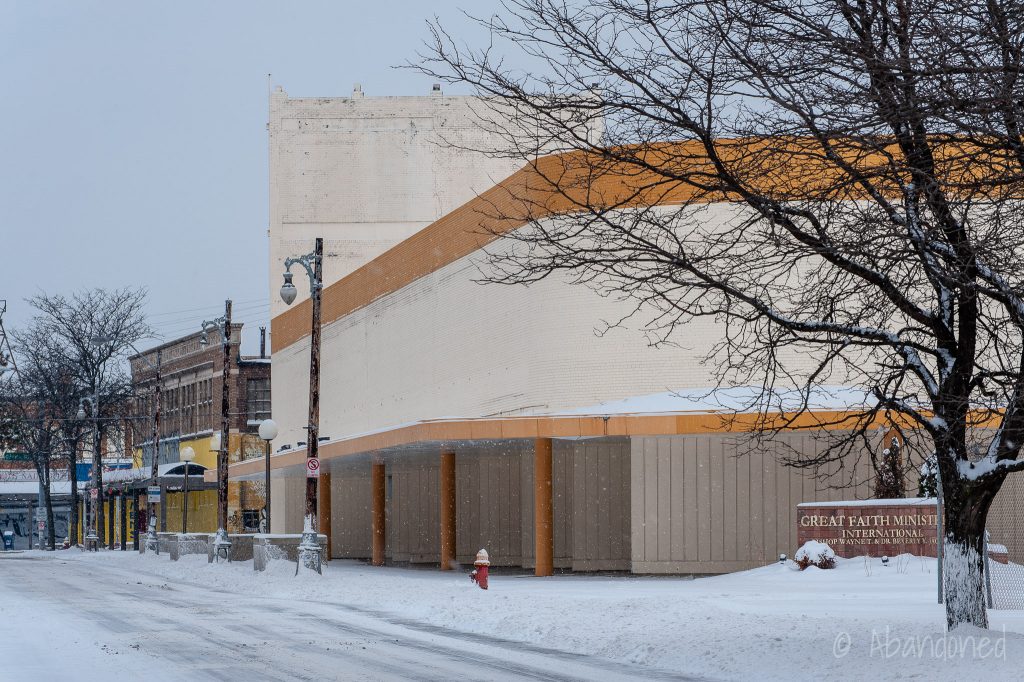 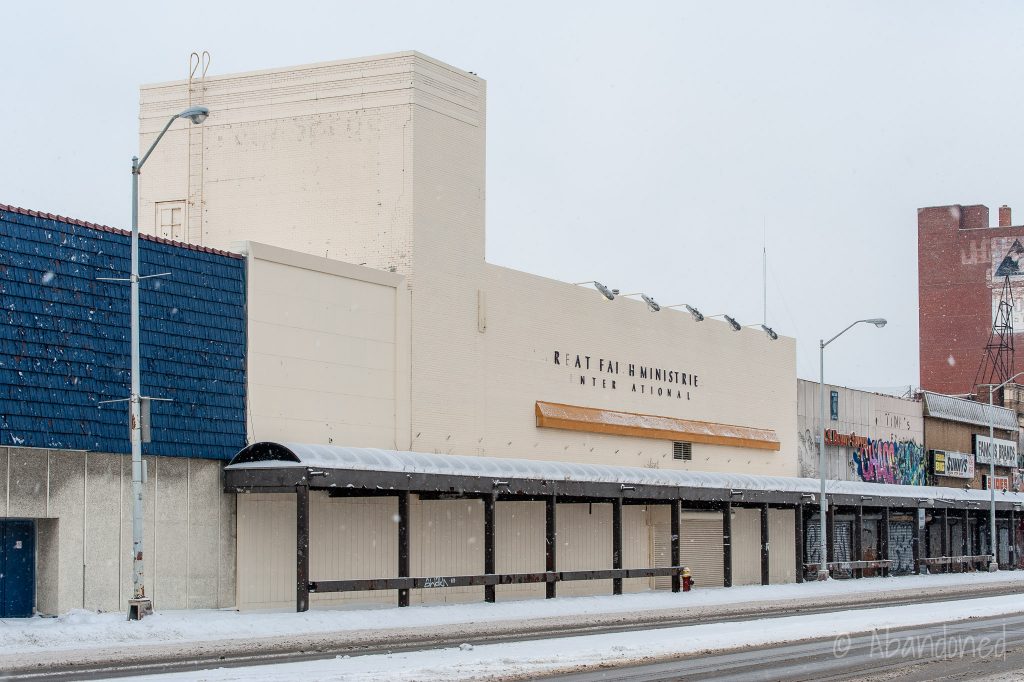 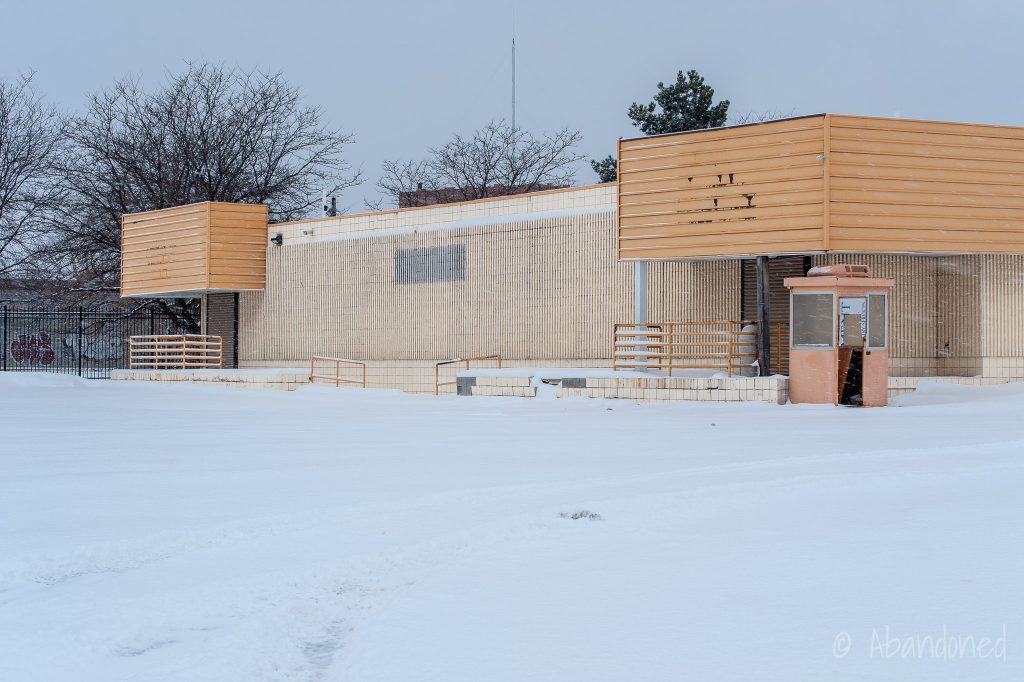 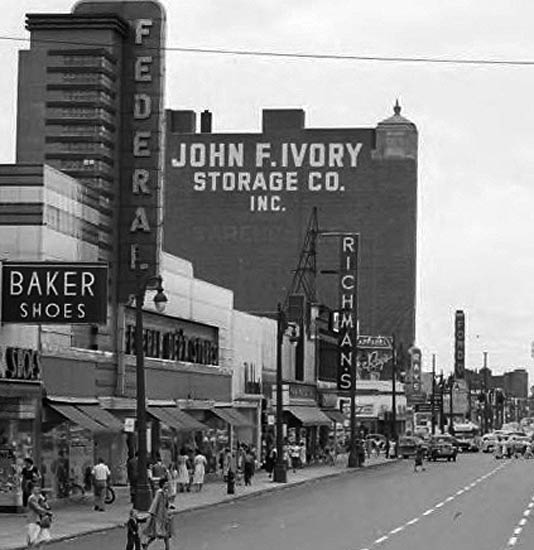 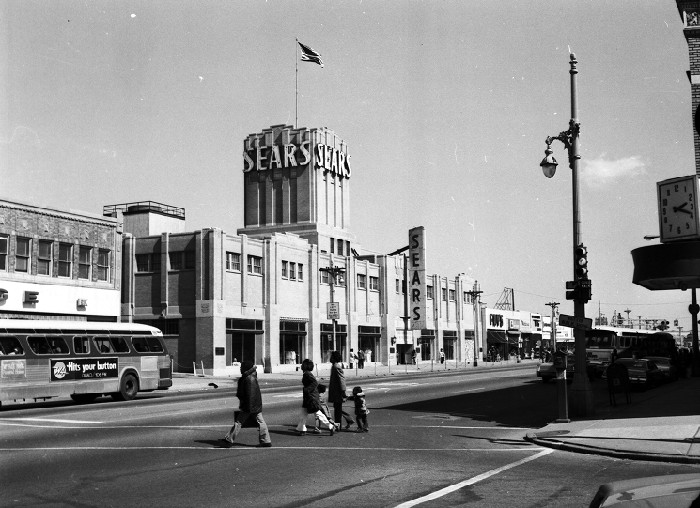 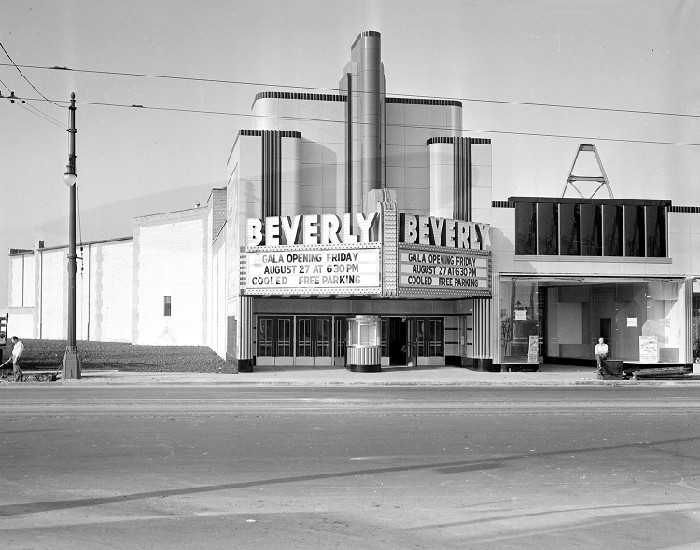 The Greenfield-Grand River neighborhood is centered around Grand River Avenue and Greenfield Road and borders a former shopping district along Grand River Avenue that included a Federal’s Department Store, Montgomery Ward, 3 and S.S. Kresge. 4 Due to racial tensions that cumulated in violent riots, industrial restructuring, the loss of thousands of jobs in the automobile industry, and rapid suburbanization the middle of the 20th century, Detroit began to rapidly contract. The city’s population peaked at 1.85 million in 1950 and by 1970, it had dropped to 1.51 million.

Federal’s was a discount retailer that was founded in Hamtramck in 1929 and grew to 18 locations by 1955 and 54 locations by 1970. 1 The Federal’s at Grand River and Greenfield, designed by Charles N. Agree and constructed in 1949, included 144,000 square-feet divided between three floors. It took advantage of a booming shopping corridor along Grand River that served the emerging Greenfield-Grand River corridor

By 1969, Federal’s was losing money and the company filed for bankruptcy in 1972. 1 Steven West commenced a hostile takeover of the Federal chain in 1977 and was successful in 1978. West dropped off the first two letters from Federal’s name, renaming most locations to Deral’s. The location at Grand River and Greenfield, however, became simply Ed’s, and part of the second floor became the corporate home to Ed’s and Deral’s. Ed’s only lasted until December 1980 when it abruptly closed after posting disappointing holiday sales.

Kingsway Department Stores, a local chain that had established locations in marginal neighborhoods, acquired some former Federal locations. 1 In May 1981, Kingsway reopened the shuttered Ed’s. But by May 1987, Kingsway was looking to offload the money-losing Grand River location. Eventually, Kingsway went out of business in May 1990.

Mammoth, a concession shopping center, opened in the former Kingsway store on November 26, 1990. 1 2 The building was acquired for $805,000 in cash in August 1989 by six Korean merchants who had envisioned 100 merchants inside that would sell apparel, accessories, and staples. 2 The booths, which ranged from 250 square feet to 1,000 square feet, rented to about 50 cents per square foot. Initially, only the first floor was utilized, with the goal of attracting 300 tenants over two floors.

The store closed in 2000. 3 Plans to reopen the store as the Grand River Place mall, with 20 youth-oriented stores, were announced in 2003 by Herb Strather, but the idea never came to fruition. 1 3 Another idea, to reopen the building as Forman Mills, a discount retailer, never came to light in 2011.

It was published on January 3, 1937, that Montgomery Ward had acquired two entire blocks at Grand River and Greenfield for a new store. 5

The ground was broken for the new $1.2 million Montgomery Ward on July 17, 1939. 6 The three-floor department store opened in 1940 and included an automobile service center and a 1,200-space parking lot.

After Montgomery Ward closed in 1986, the building was reused for Tower Center Mall. 3 The shopping center comprised a dozen tenants that included nail and hair braiding shops, fashion boutiques, and staples.

Forman Mills, a discount retailer once proposed for Federal’s across Grand River, opened in Tower Center Mall on November 2, 2018. 3

The S.S. Kresge discount store opened adjacent to Montgomery Ward on May 16, 1940. 4 The 16,500 square-foot Kresge, the largest in the chain, was spread between two floors. 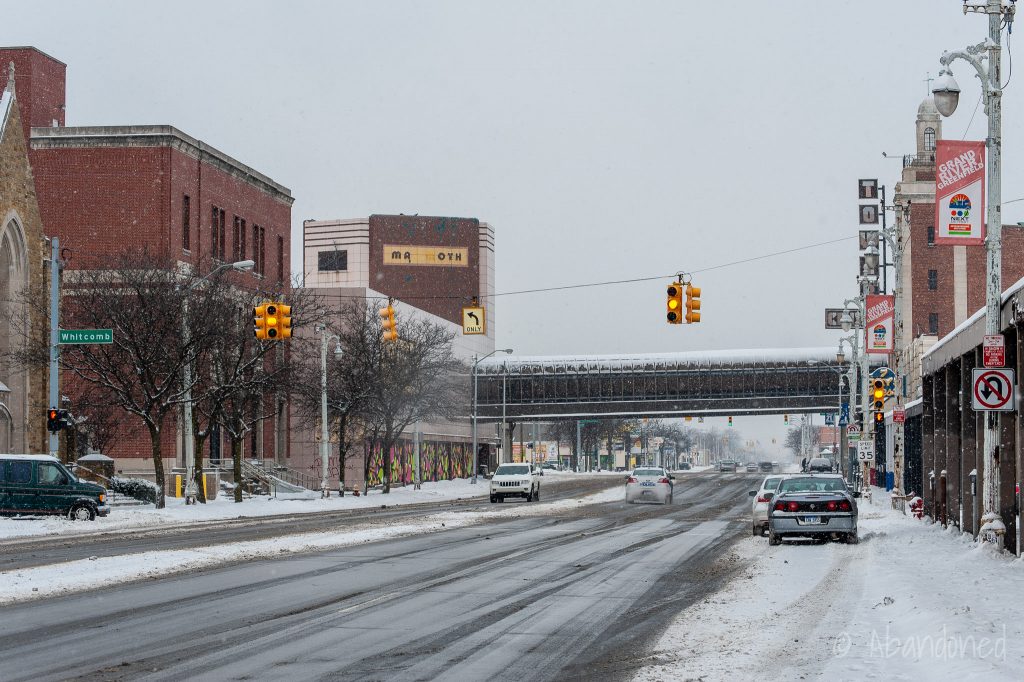 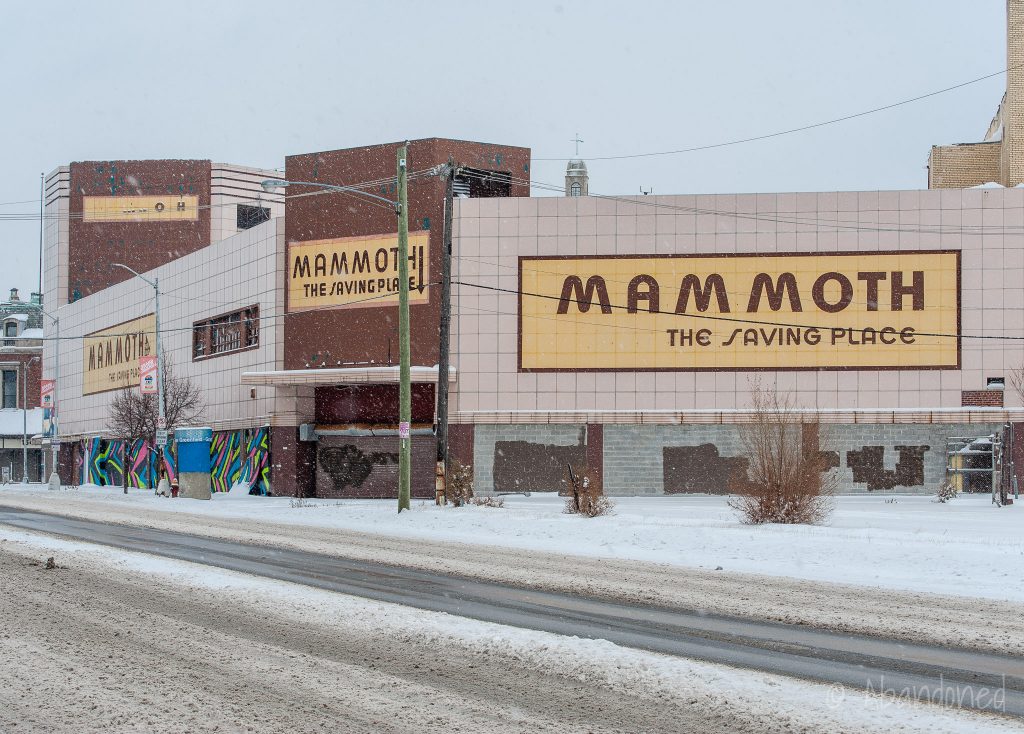 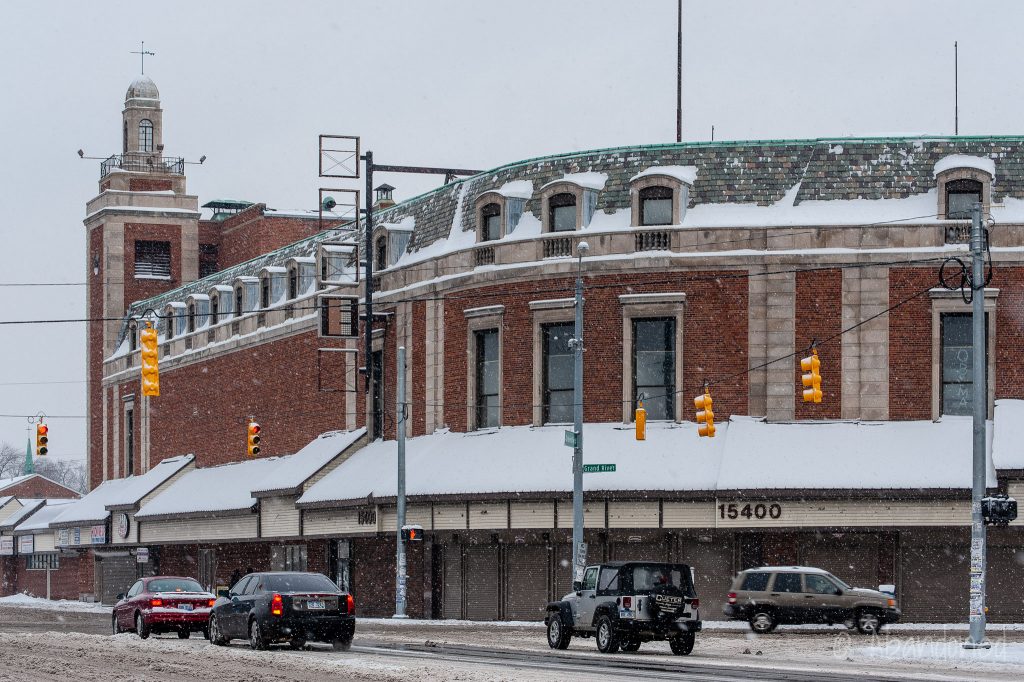 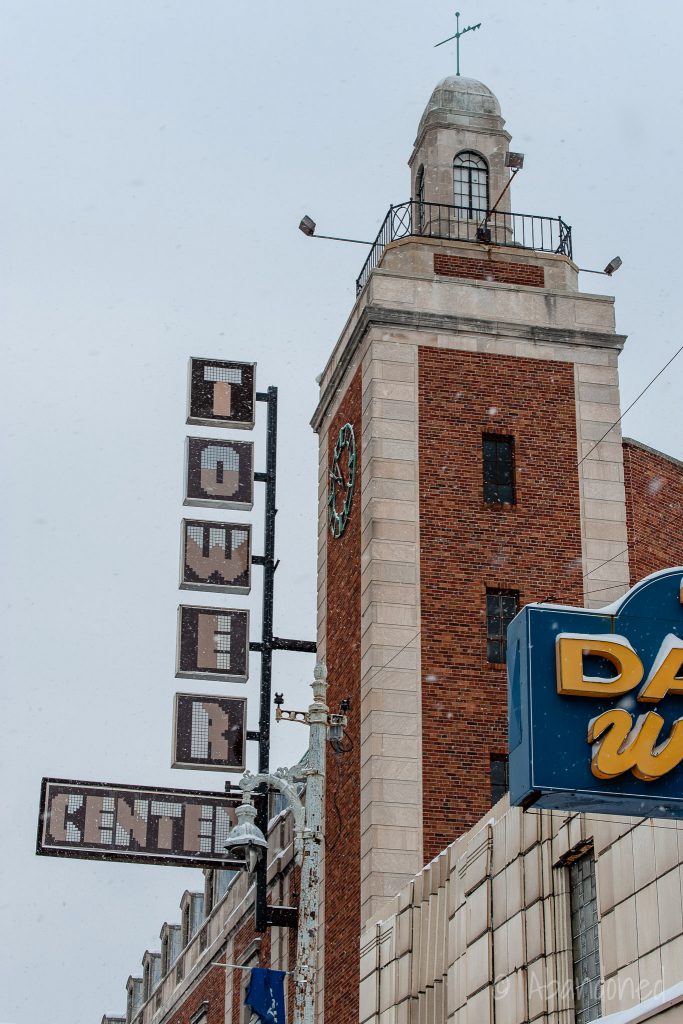 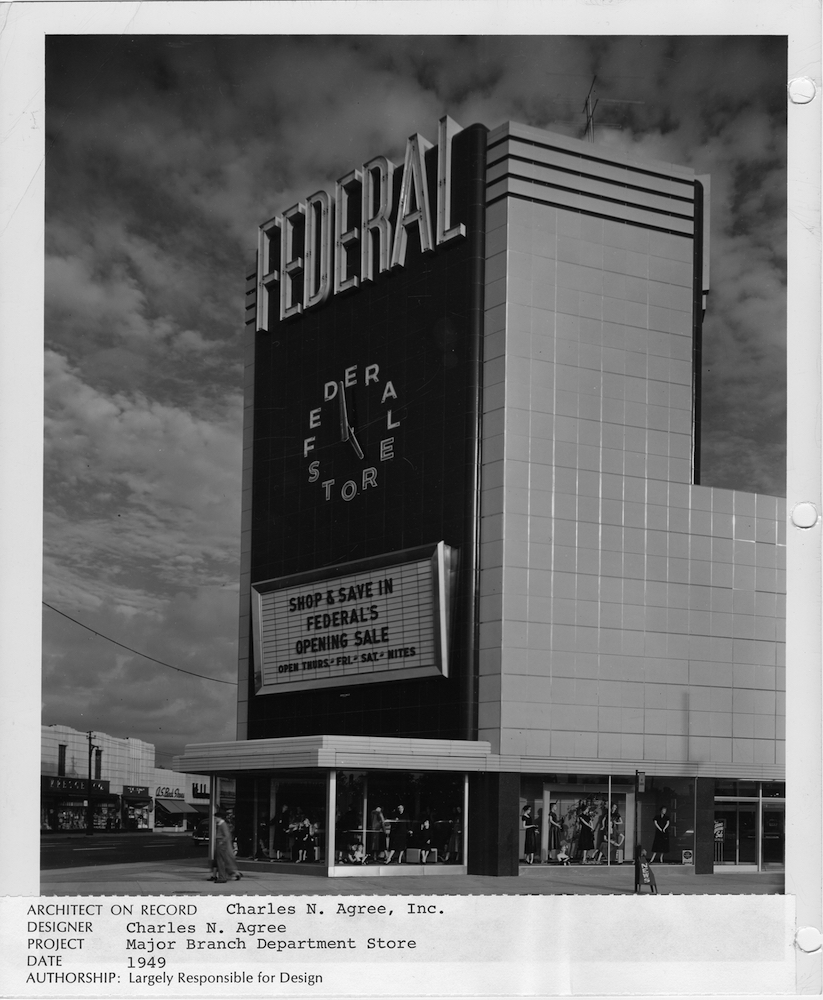 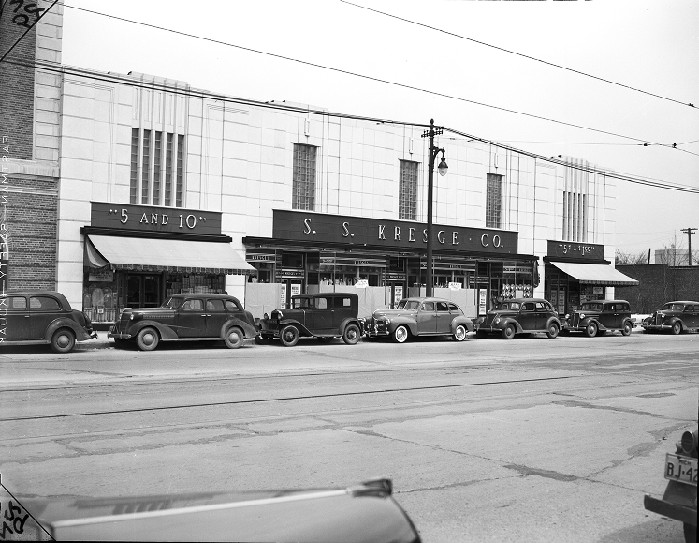