The Jackson Sanatorium is a former resort and sanatorium in Dansville, New York that focused on recuperation through hydrotherapy and a diet focused on fruits, vegetables, and grains.

Planning for the Jackson Sanatorium near Dansville began in 1852 by Nathaniel Bingham. 5 Bingham, a believer in water-based cures, sought out a site near sulfur-rich springs 1 2 as he believed that the water possessed curative properties for kidney and bladder troubles. 5 The belief was widespread, having been popularised earlier in Germany.

Bingham partnered with Lyman Granger and the springs resort opened in 1853. 5 The resort consisted of a single three- and four-story wood-framed building.

The sanatorium passed into the hands of Dr. Abraham Pennell, who placed his son-in-law, Dr. Stevens, in charge. 5 The hospital was not popular and closed shortly after. 5 12

Pennell recruited Dr. James Caleb Jackson with the hopes that he would be able to find someone to purchase the property. 5 Jackson, who had earlier worked at Glen Haven in Watkins Glen and was a believer of water-based treatments, leased the sanatorium for a term of three years with an option of buying within that period.

The resort opened as Our Home on the Hillside 9 10 12 on October 1, 1858, taking in those with developmental disorders and people who were overworked or had nervous exhaustion. 4 By winter, additional land was acquired for a dozen cottages and for Liberty Hall, a recreation building. 5 12 Every building at the facility featured steam heat, tall ceilings, and tall windows to maximize light and airflow. 4

Our Home on the Hillside focused on Jackson’s idea of recuperation through hydrotherapy, and a diet focused on fruits, vegetables, and grains. 1 2 Particularly, patients were supplied with unprocessed bran and graham flour supplements. 1 2 12 Referred to as granula by Jackson, it was flavorless and only made digestible by soaking it in water for 20 minutes. 12 Granula was the first dried breakfast cereal and proved to be quite popular not only at the resort but for sale in the market. 13

Dr John Kellogg, one of Jackson’s colleagues, created a biscuit made of whole grains, wheat, and cornmeal in 1887. 1 2 Jackson believed it infringed upon his copyright for granula as Kellogg had named his product Biscuit Granula. The case was settled, with Kellogg using the name Granola. 2

Jackson developed a companion product to granula — Somo. 12 The caffeine-less coffee was intended for guests who insisted on having coffee with their meals. Somo was the forerunner of Postum and other coffee substitutes.

By 1883, 60,00 pounds of granula was being shipped from Dansville. 12 It was often marketed as with the slogan “Eat Granula. Drink Somo.” Jackson eventually withdrew from the granula business, and a local baker took over operations until 1920 when granula was removed from the market.

The sanatorium began to be used as a resort for the wealthy looking to be cured of numerous physical and mental ailments after the Civil War. 1 In 1872, the institution was called Our Home Hygenic Institute. 10 13 Not long after, an aging Jackson turned over the facility to his son and daughter-in-law. 1 10

A fire started by an overturned oil lantern in a patient’s room destroyed the sanatorium on June 26, 1882. 5 There was no loss of life.

As Dr. Jackson was practically retired, his son, Dr. James H. Jackson, decided to rebuild the ruins of the old building. 5 Warner & Brockett, of Rochester, was hired to design a five-story, 300-foot-long sanatorium. Frederick & Son, also of Rochester, was the lead contractor.

The first brick of the new building was laid on October 1 5 and reopened on October 1, 1883, 1 3 5 as The Sanatorium. 10 13 It was regarded as the first fireproof building built in the nation outside of a major city for a health institution. 5 The main building cost $180,000 to erect and featured thick load-bearing walls built of brick and ribbed cast-iron ceilings that were infilled with brick. Like before, each room featured tall ceilings and windows to maximize light and airflow.

The Sanatorium was the first institution of its type in the country to use the word “Sanatorium.” 5 The facility was renamed The Jackson Sanatorium in 1890, 13 and was renamed again in 1903 as The Jackson Health Resort, operated by James Jackson’s son, Dr. James Arthur Jackson. 10 12 13

The dawn of the 20th century presented The Jackson Health Resort with new challenges. The old water cures that were once heavily believed had slowly begun to fall out of fashion. 12

In July 1902, a training school for nurses was added. 5 Applicants to the school had to serve two months on probation, after which the superintendent and the governing board evaluated the moral and physical requirements. Classes were spread over two years and included general nursing, massage, administration of electricity, dispensing of drugs, urinalysis, blood examination, Swedish movements, hot air treatment, neurasthenia, surgical and obstetrical nursing, and practical courses in anatomy, physiology, and materia medica.

On March 24, 1914, The Jackson Health Resort filed for bankruptcy 6 but continued to operate by a creditors’ committee. 8 The resort was taken over by the U.S. government for use as a psychiatric hospital during World War I. 1 11 12

As a Health Resort

Control of the sanitorium passed to William E. Leffingwell of The Glen Springs in Watkins Glen on December 11, 1916. 8 Leffingwell operated The Jackson Health Resort as a private institution until 1919. 12 The health spa was then run by a variety of interests until Bernarr McFadden, a health and fitness entrepreneur, purchased the complex and reopened it as the 122-room Physical Culture Hotel in 1929. 1 3 12 The name was derived from his magazine, Physical Culture. The hotel flourished, with celebrities and the wealthy flocking to its many amenities, such as a swimming pool, sunbathing rooms, tennis courts, and social rooms.

In late October 1977, Henry E. Foote of Canton and William F. Dorne of Cortland announced plans to restore the disused Castle on the Hill. 10 13 The pair desired to operate The Dansville Institute – An Agriculture and Biblical Health Center, which would be administered by Christians Concerned for Human Needs (CCHN). 13 The non-profit would operate a hotel and health spa that would closely follow much of Jackson’s teachings. 10 It would allow for historical and modern representation of information, diet, therapy, and healing, with rooms dedicated to educational programs, seminars, workshops, and conventions. 9 10

The sale of Castle on the Hill to CCHN was finalized in February 1978. 9 13 CCHN planned to open the 104-foot-long dining room by the summer. 10

CCHN discovered a box within a crypt eight feet beneath the main entrance. 9 The non-profit invited the public to come to an unveiling event, to which about 300 people attended. Inside the box were damaged books and scrolls, including bound and unbound volumes of “The Laws of Life” by Jackson, copies of all of Jackson’s published books and pamphlets, photographs, and granula. 13 Several locks of hair, including a six-inch piece cut from Jackson’s beard at age 72, and a second portion took 30 years before, was also in the box.

Excess furnishings from the former Castle on the Hill were auctioned from October 14 to October 16 in 1979. 14 The furniture included a large golf leaf mantle mirror, beds, chests, tables, 7-inch marble slabs, and miscellaneous items.

The Dansville Institute operated until at least 1981.

Peter Krog, the owner of the Krog Corporation, purchased the abandoned hotel for $45,000 16 at a county tax auction in 2002. 15 Krog planned to restore the main building into a medical education facility, medical offices, an upscale day spa, and a museum and applied for a state grant to assist in the rehabilitation of the building. 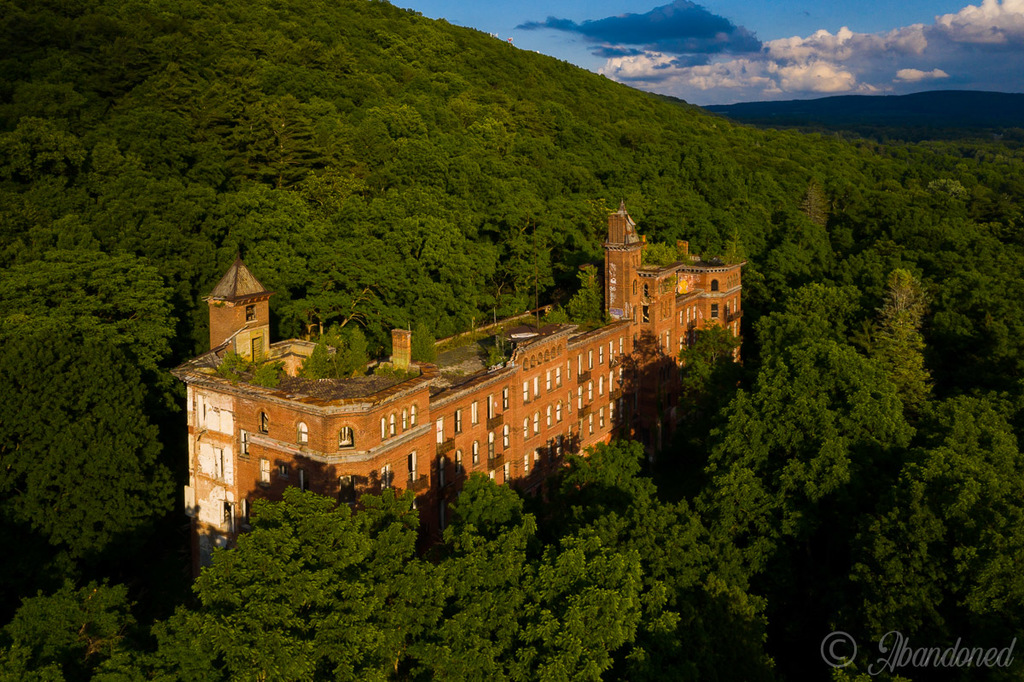 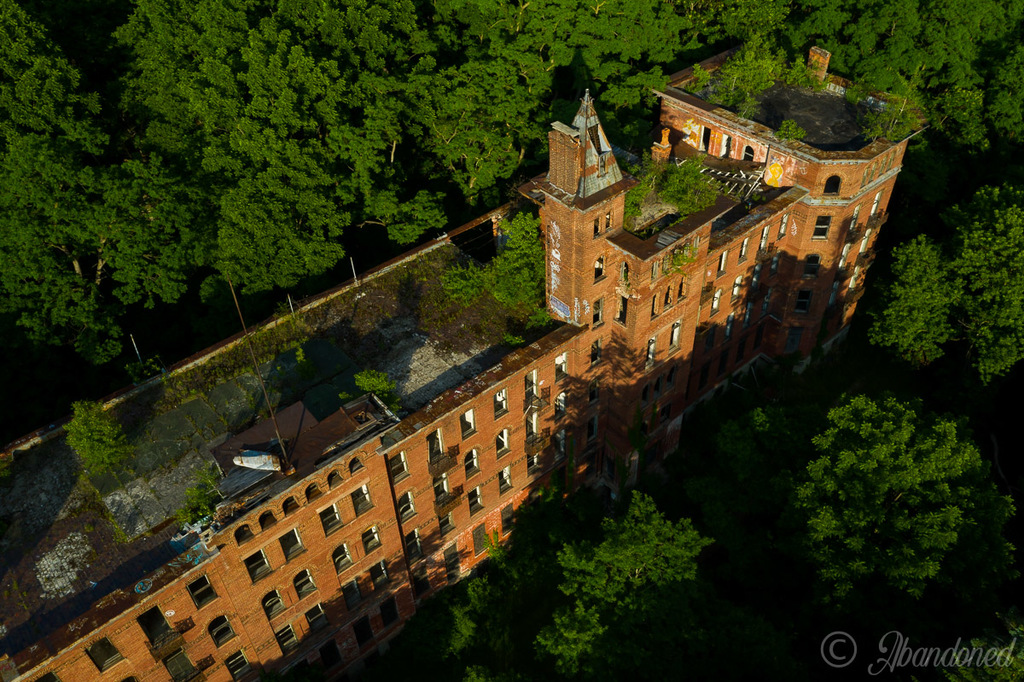 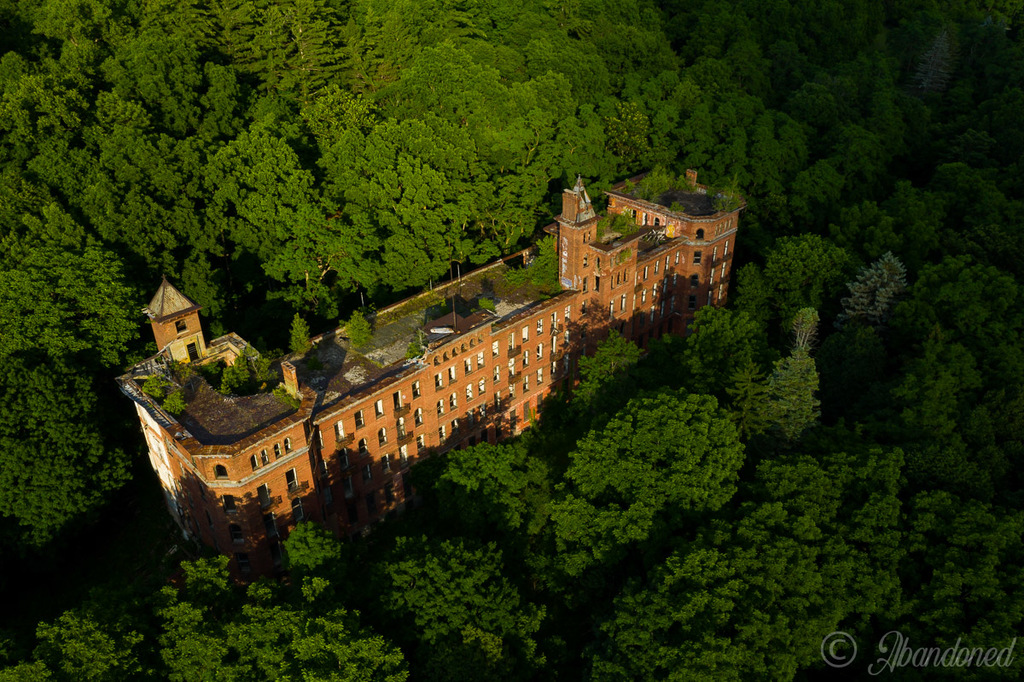 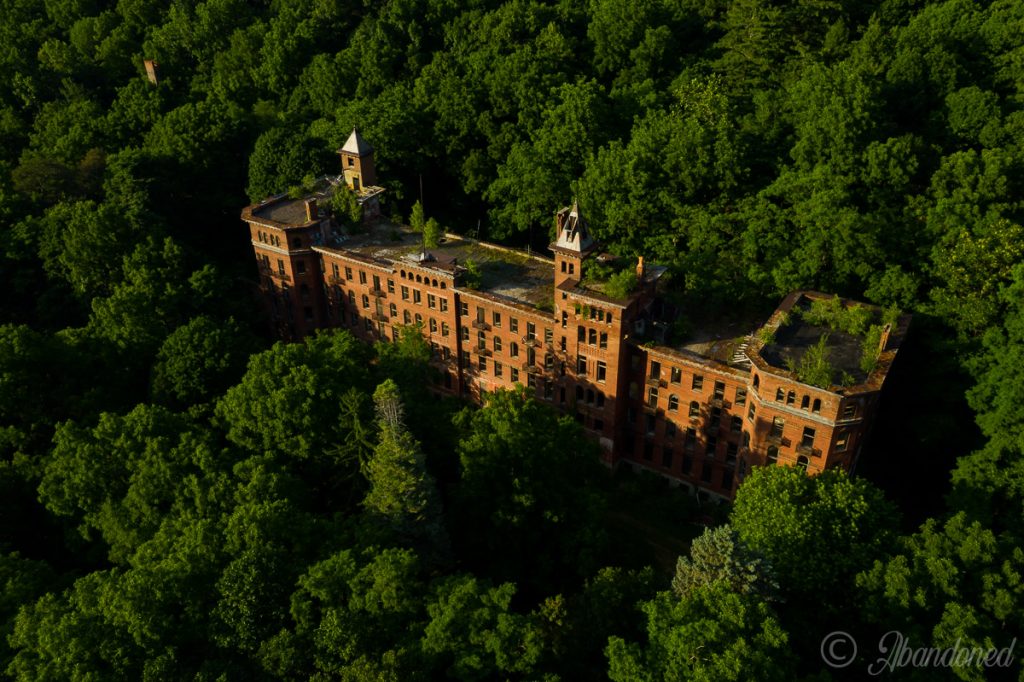 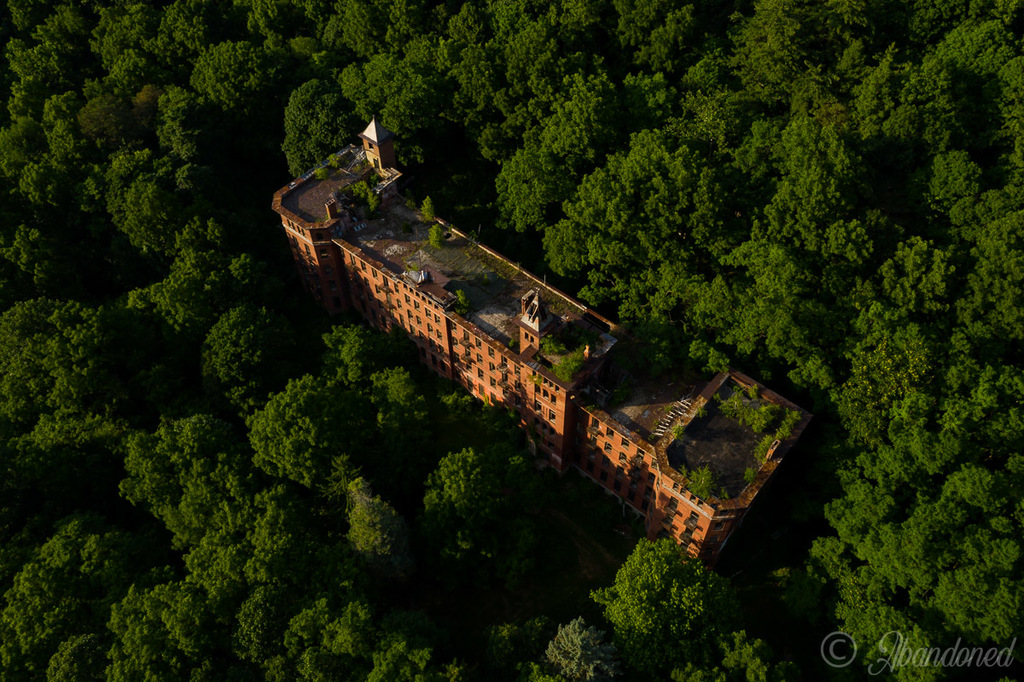 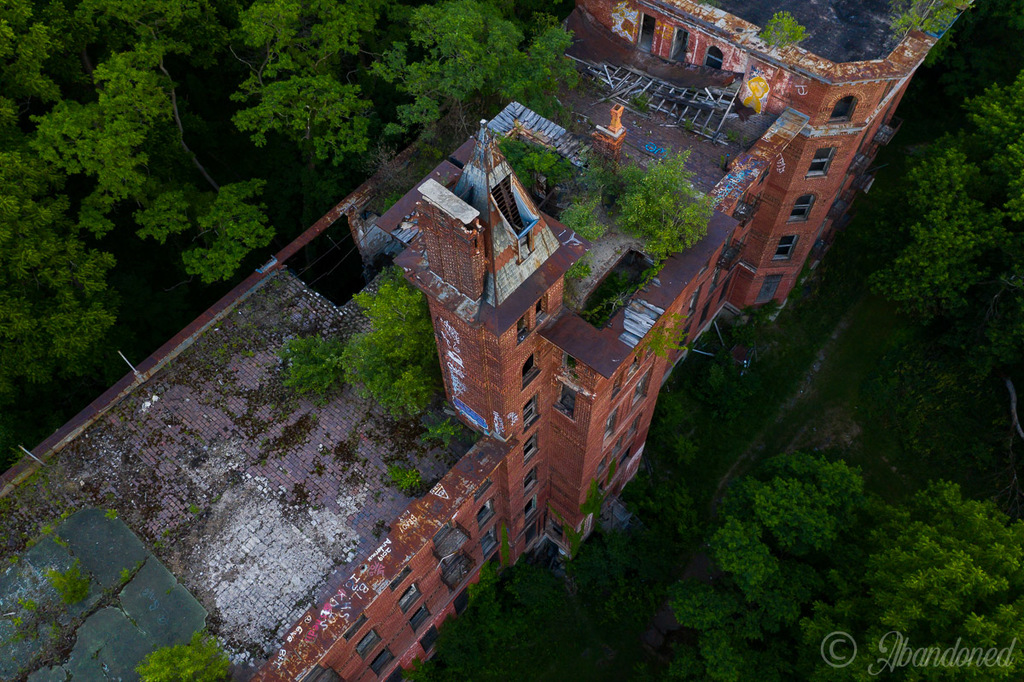 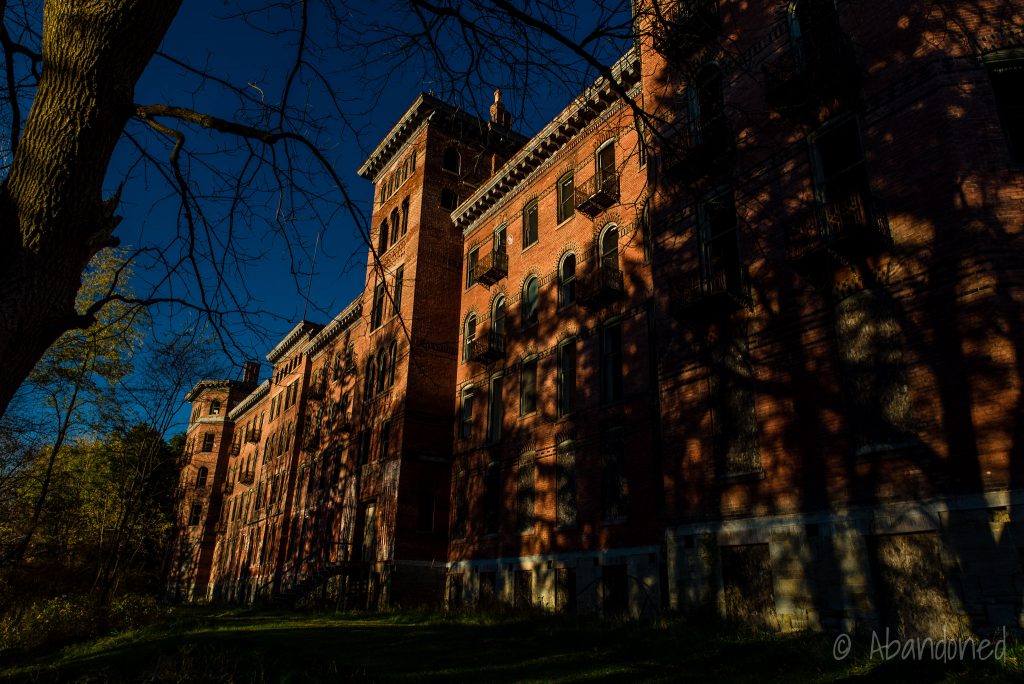 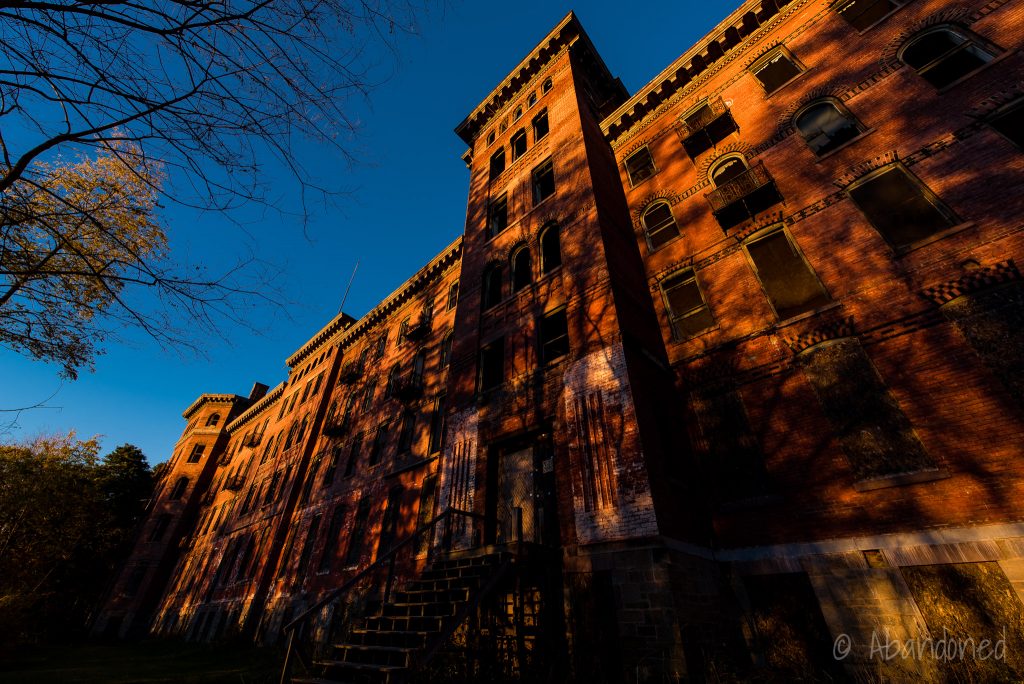 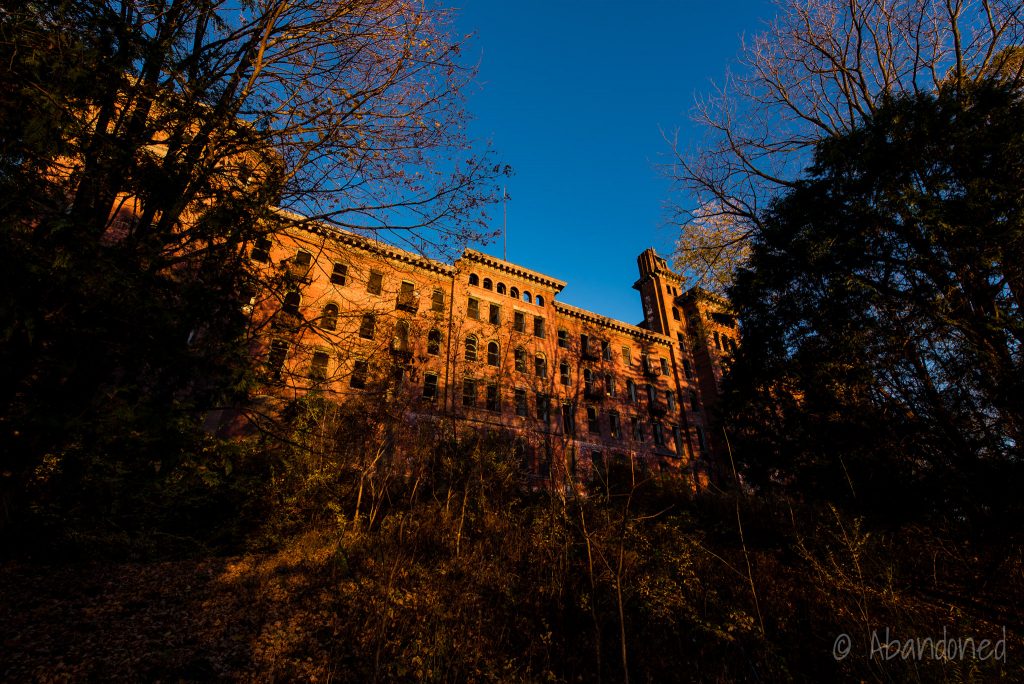 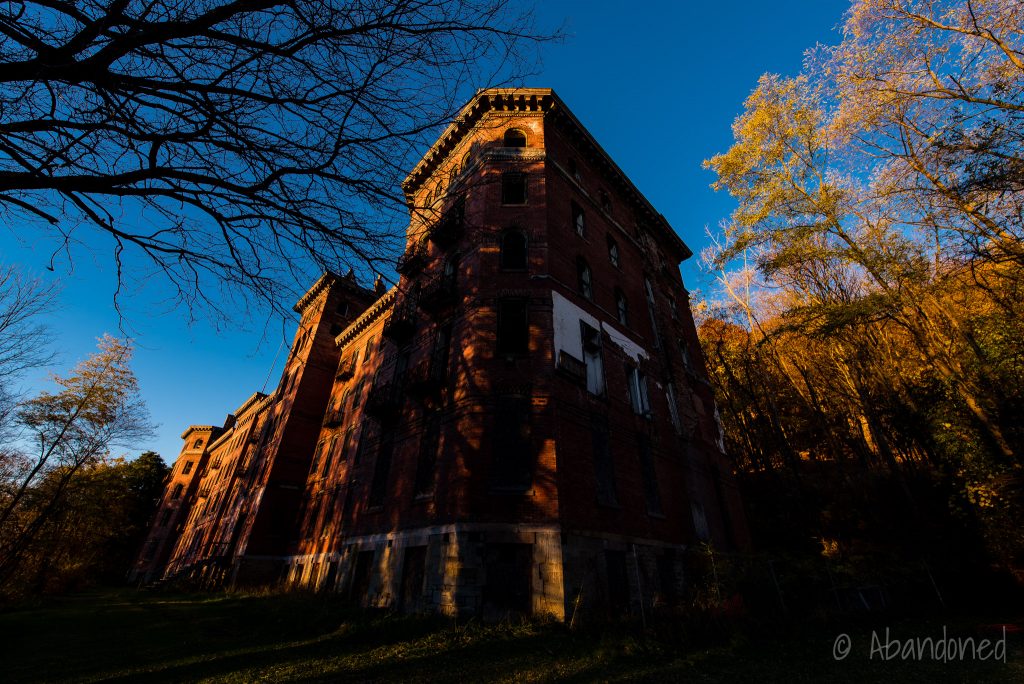 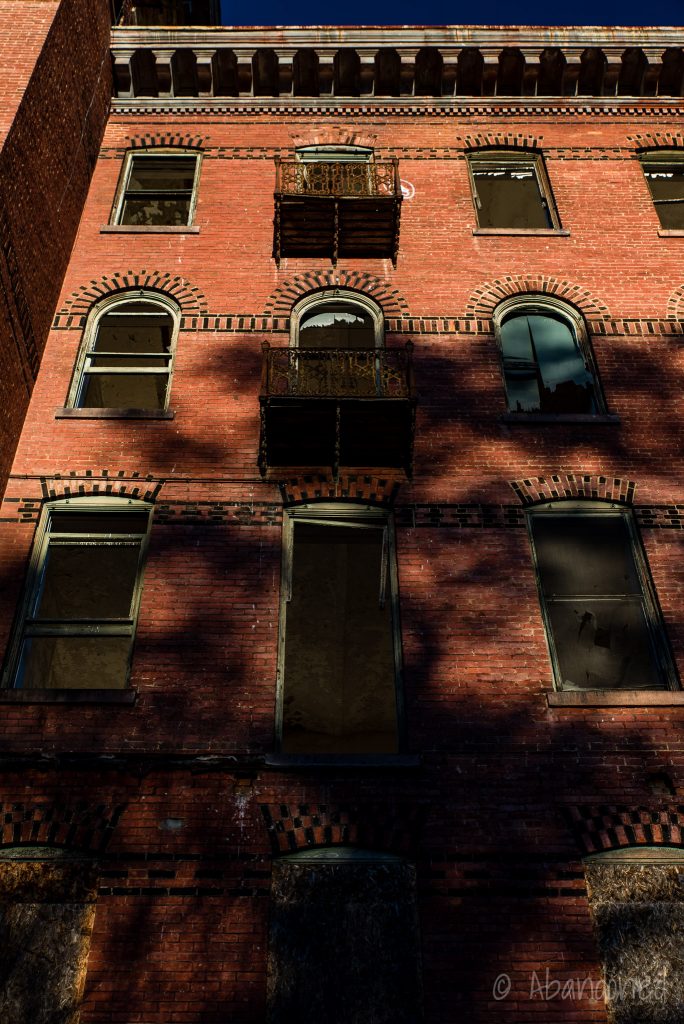 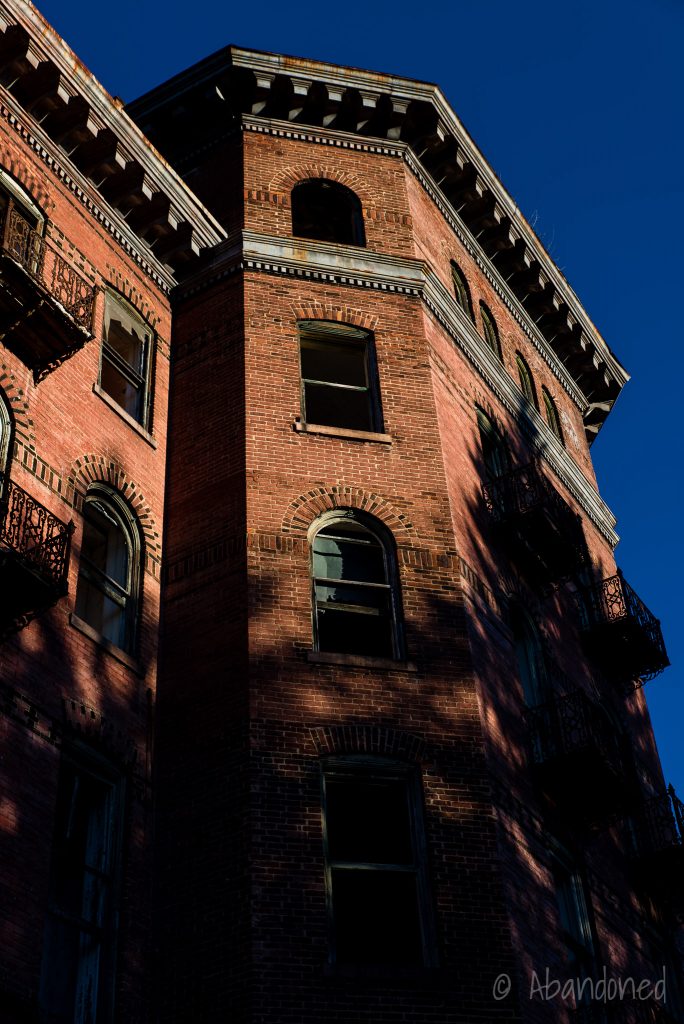 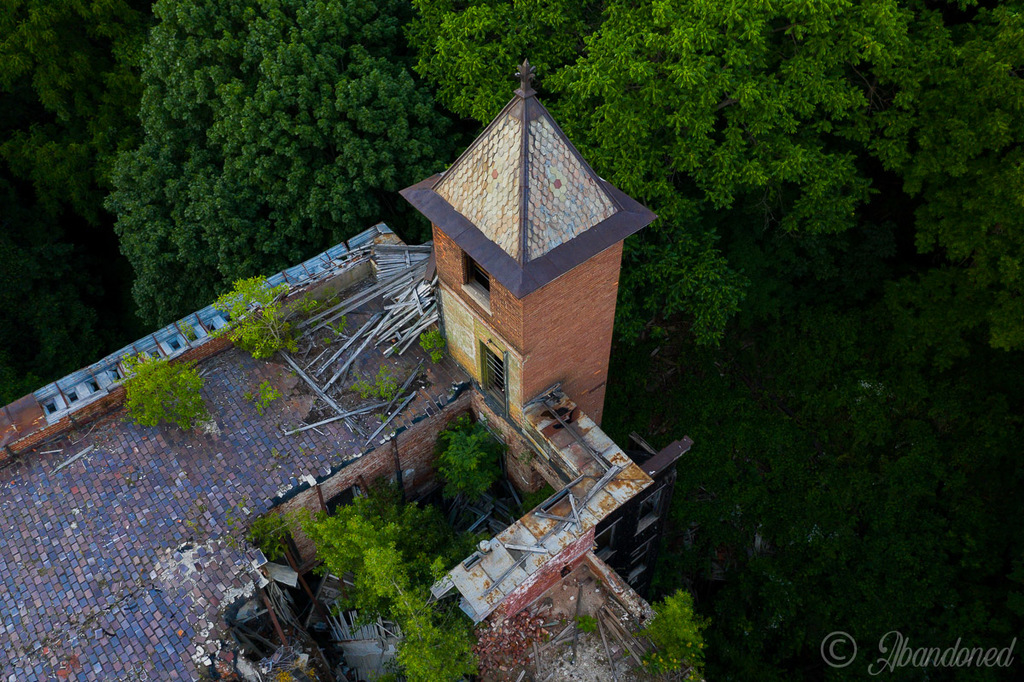 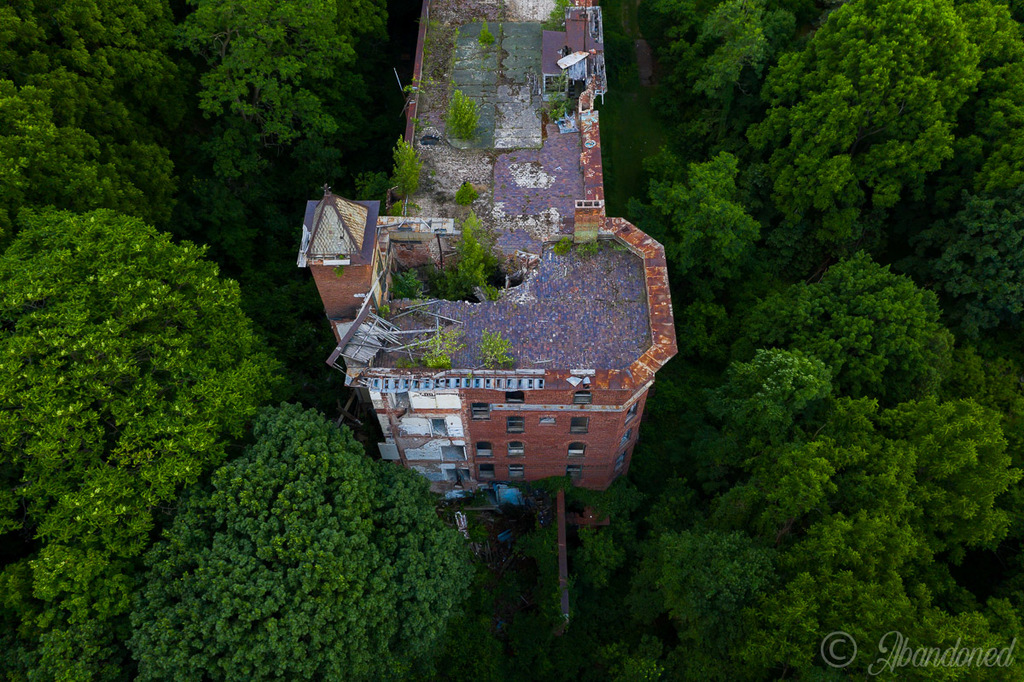 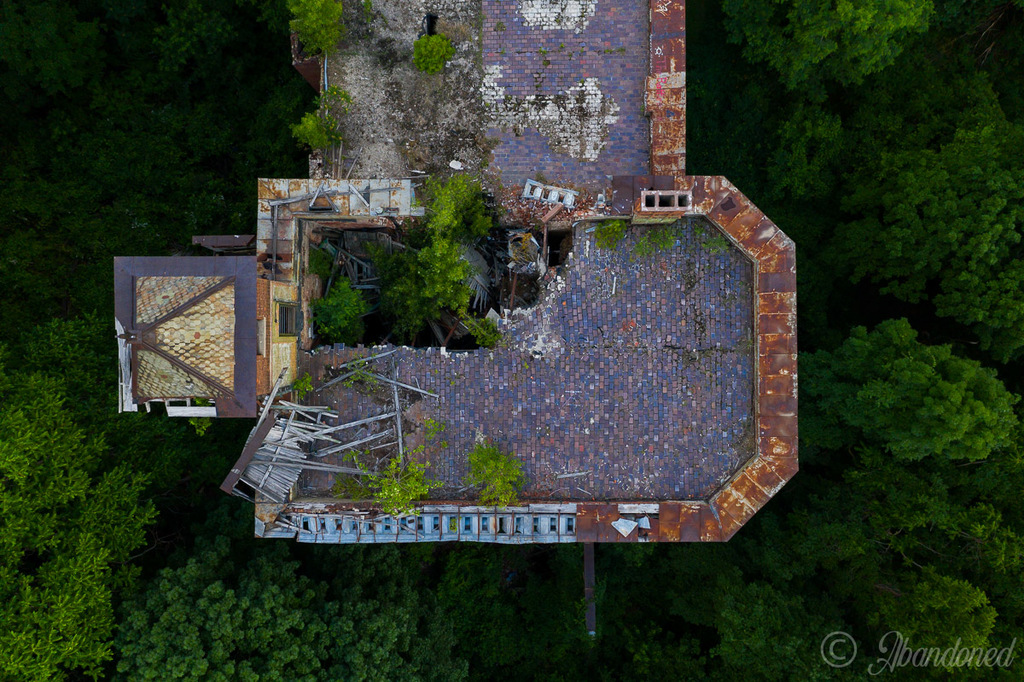 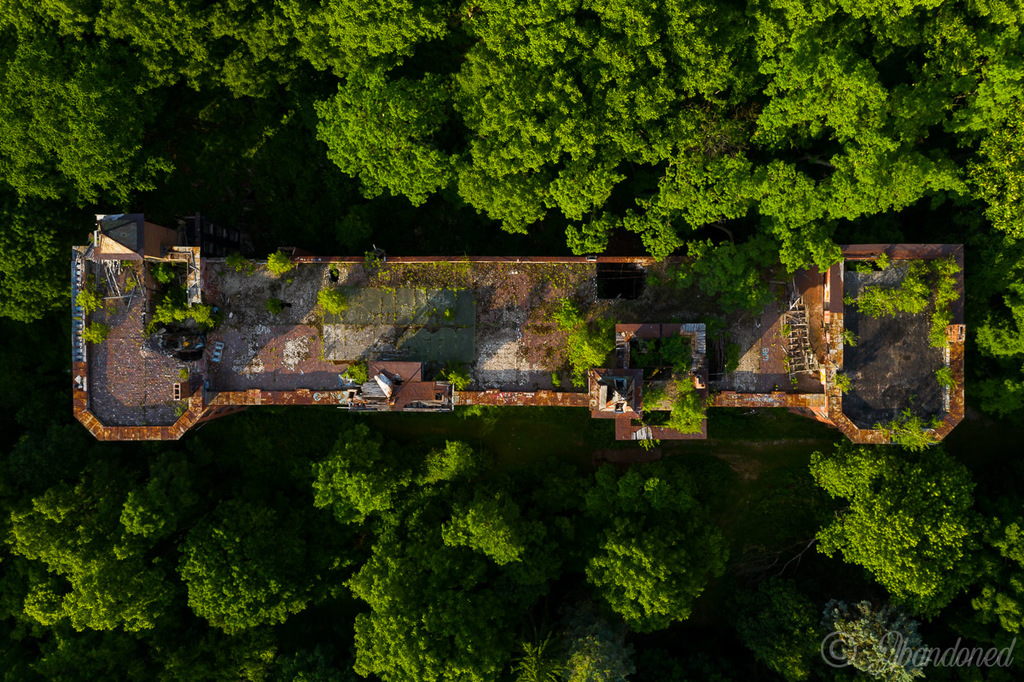 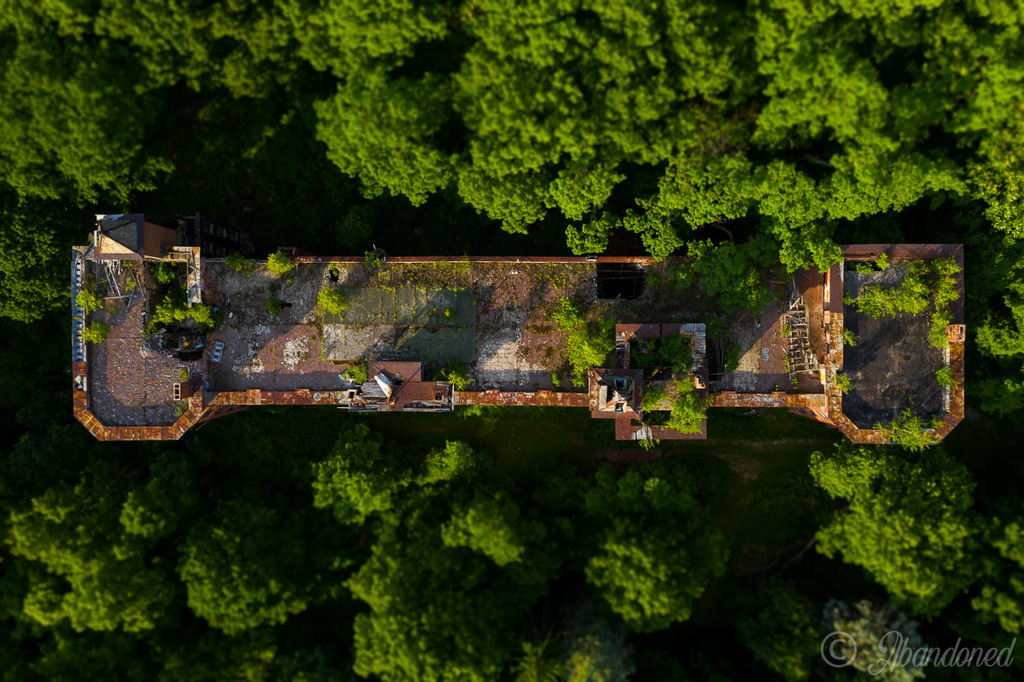 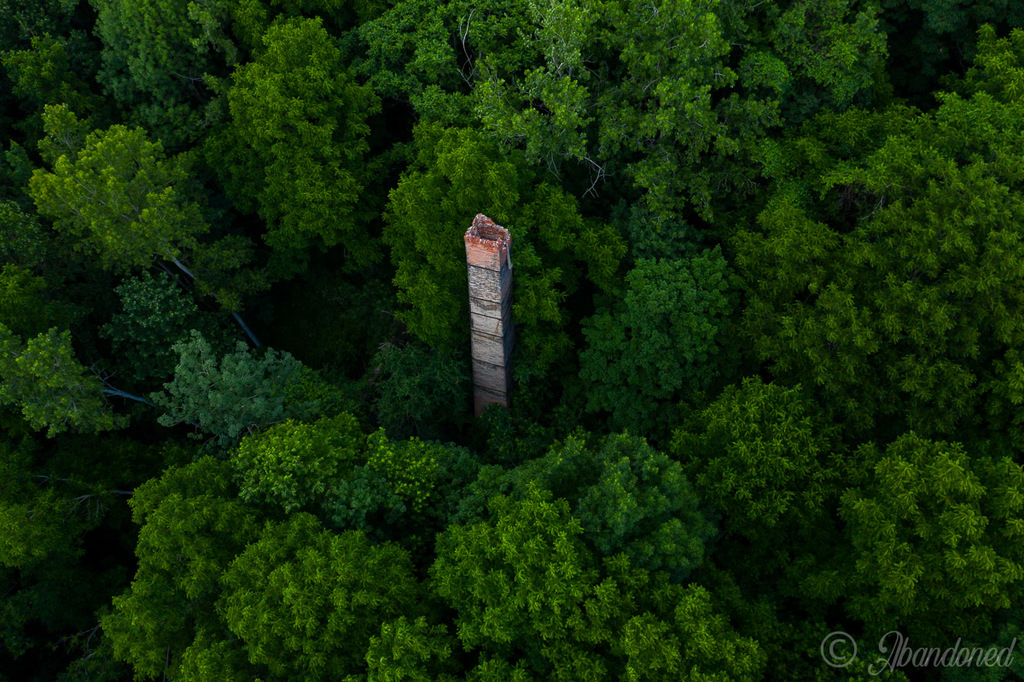 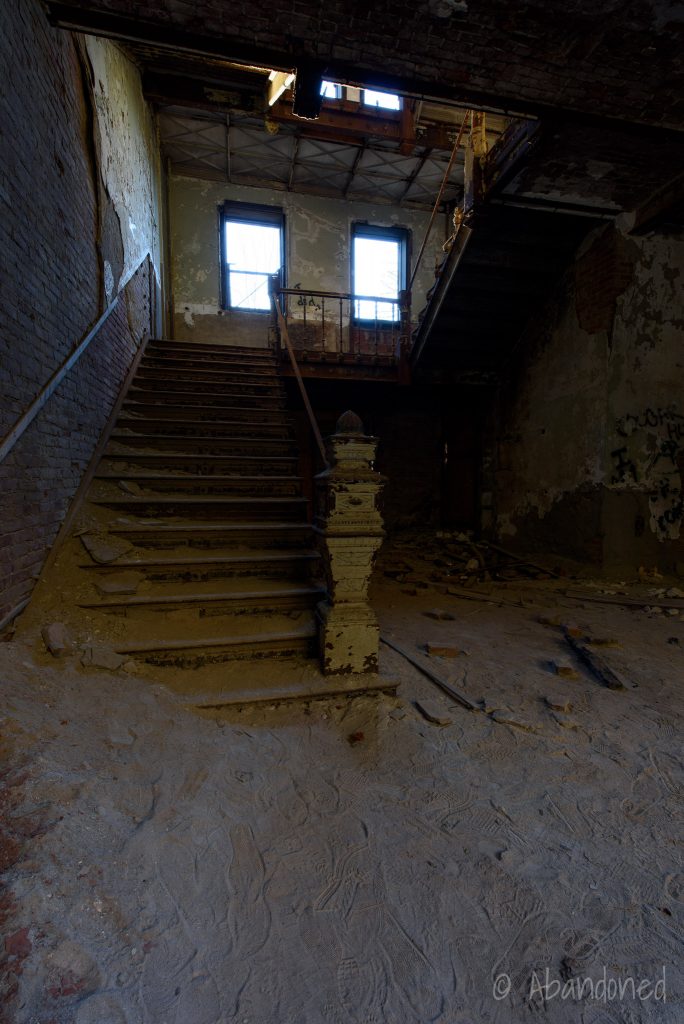 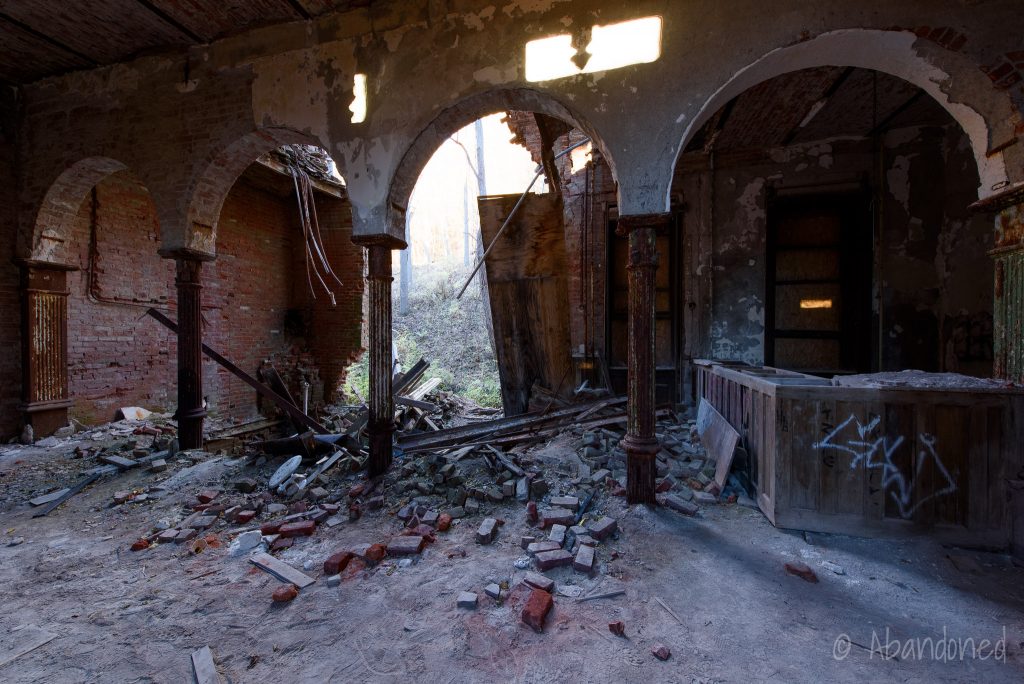 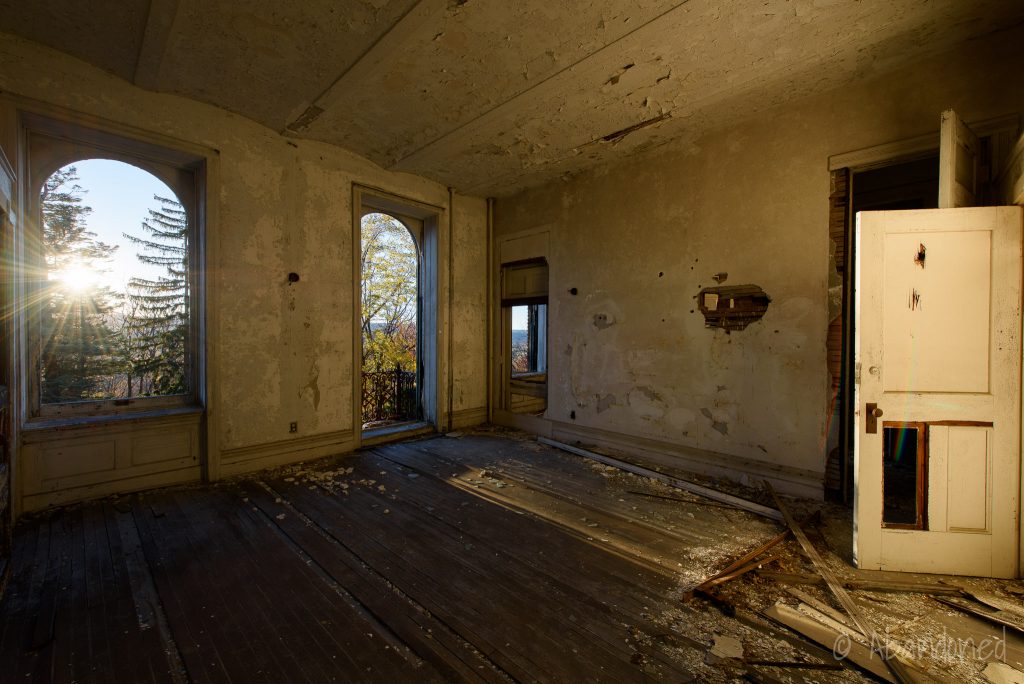 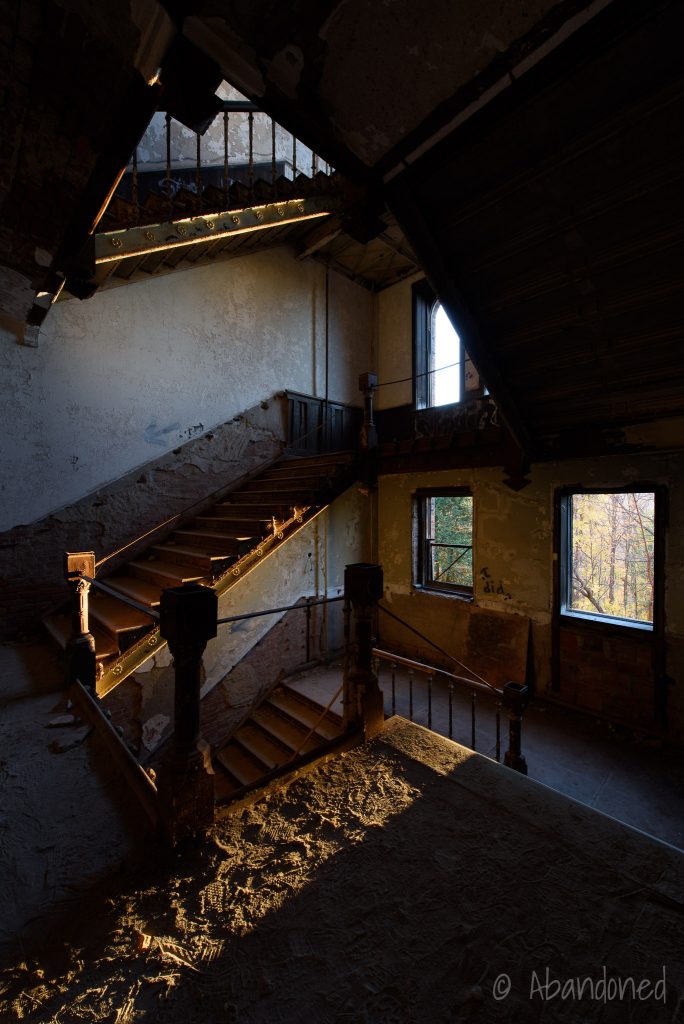 One of the more infamous UFO encounters in Kentucky is the Kelly-Hopkinsville Encounter, otherwise known as the Hopkinsville Goblins Case. Occurring in the fall of 1955 near Hopkinsville and Kelly, Ke…
END_OF_DOCUMENT_TOKEN_TO_BE_REPLACED
Category In FocusPosted on October 17, 2014March 12, 2020

If you are one of our older readers, you most likely remember those dedicated tuberculosis hospitals that were in every corner of the United States in the 20th century. Tuberculosis (TB), an infect…
END_OF_DOCUMENT_TOKEN_TO_BE_REPLACED
Category In FocusPosted on May 11, 2014April 22, 2015

Waveland, located in Danville, Kentucky, is the ancestral home of the Green family and was constructed between 1797 and 1800 by Willis Green. [gallery type="rectangular" link="file" ids="17257,1725…
END_OF_DOCUMENT_TOKEN_TO_BE_REPLACED