The Jamestown & Franklin Railroad is an abandoned railroad between Jamestown and Oil City, Pennsylvania. It included a branch to Ashtabula, Ohio.

George A. Bittenbender, William Gibson, David Hadley, Henry C. Hickok, A.W. Raymond, William Lawrence Scott, and John P. Vincent chartered the Jamestown & Franklin Railroad (J&F)  on April 5, 1862, 1 2 with the goal of connecting the Erie & Pittsburgh Railroad (E&P) in Jamestown with the oil fields 25 miles to the east and southeast. 1 The charter was amended to allow the company to purchase up to 5,000 acres of land adjacent to the railroad for mineral exploration on March 9, 1863.

George Palmer, president of the Buffalo & State Line Railroad, and Amasa Stone, director of the Cleveland, Painesville & Ashtabula Railroad (CP&A), invested heavily into the J&F. 3 On March 21, 1864, the CP&A leased the entirety of the J&F for 20 years. 2 (The CP&A consolidated with the Cleveland & Toledo Railroad and the Michigan Southern & Northern Indiana Railroad to form the Lake Shore & Michigan Southern Railway in 1869. 5)

Flush with funding, construction of the J&F began in Jamestown in April 1864, and by August 1865, the mainline had stretched 21 miles to Stoneboro. 4 The J&F then leased trackage rights on the E&P and began running trains between Jamestown and Girard. 5  Construction was completed to Franklin on June 27, 1867, and to Oil City on May 24, 1870, which included a 909-foot tunnel finished at the cost of $100,000 8 after the J&F failed to secure the right-of-way at Hogback Hill in Oil City. 1

The JF&C was acquired by the New York Central Railroad (NYC) on January 1, 1915, 10 and became the NYC’s Franklin Division on April 17. It was consolidated into the NYC’s Erie Division and operated as their Oil City Branch in the 1930s.

The NYC, like many railroads in the United States, declined in use after World War II. Over-regulation by the Interstate Commerce Commission and competition from automobiles, trucks, and seaways caused traffic on the NYC to plummet in the 1950s and 1960s. On February 10, 1965, the NYC began deliberations to dismantle its route between Reno and the north side of Oil City, which would include the abandonment of the tunnel which needed $50,000 to $100,000 in repairs. 8 9 Existing customers, such as the Continental Can Company and Wolf’s Head Oil Refining Corporation near Reno, could be served by the Erie Railroad.

The NYC was granted permission to abandon its route between Reno and the north side of Oil City in late 1967. 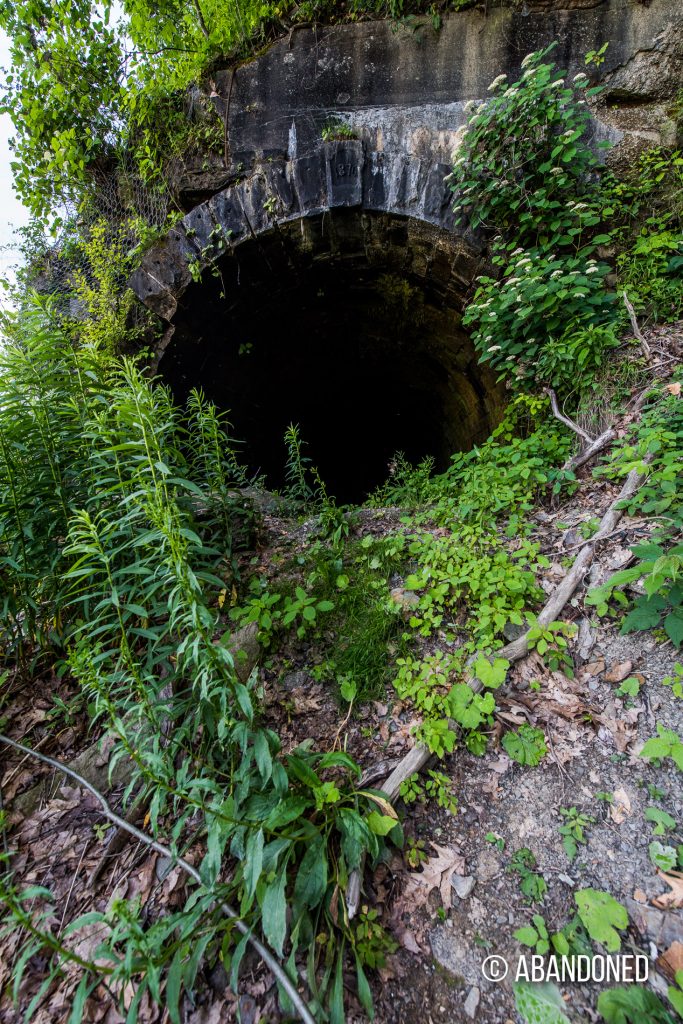