The Norfolk & Western Railway Bluestone Branch is an abandoned 17-mile coal-hauling rail line along the Bluestone River in West Virginia.

The Norfolk & Western Railway (N&W) was the first railroad to enter the Pocahontas coalfields of southwest West Virginia as part of the construction of a westward extension of its mainline from Radford, Virginia. 4 After developing the coalfields in the vicinity of Pocahontas, it looked to constructing a the Flat Top Extension along the Bluestone River to access over 44,000 acres of coal land. 8

The N&W’s surveys of westward expansion in West Virginia taken in 1881 and 1882 indicated that a preferred route involved snaking down the Bluestone River, up Crane Creek, over Peters Gap, down Pinnacle Creek to the Guyandotte River where it could turn northwest to the Kanawha River or the Ohio River or southwest to the Big Sandy River to the Ohio River. In July 1883, William Ingles was named Engineer in Charge over the development of the Flat Top Extension, which was referred to as the Blue Stone Branch of the New River Railroad Division. 8

In April 1884, the London & Buckingham Construction & Mining Company signed a contract with the N&W for the company to build a railroad down the Bluestone River to mines that it was developing. 8 The N&W agreed to have the line ready by November 1; in return, the mining company agreed to ship at least 300 tons of coal per day by that date. Construction began in May when contractor Henry Davis of Lexington, Virginia began excavation work. By June, crews were underway building the first crossing of the Bluestone.

Freeman & Jone’s mining operations along the Simmons Creek Branch of the Flat Top Extension began shipping coal in August, followed by John Cooper & Company’s mines along Mill Creek Branch in November. 8 By the end of the year, the N&W had expended $106,449 to build track from Bluestone Junction to Simmons, with branches up Mill and Simmons Creeks to serve three operations.

The N&W began searching for a new route to expand westward to tap into the emerging Pocahontas coalfield and onward to the Guyandotte River near Pineville 1 and the Ohio River as part of its Ohio Extension. 8 It was estimated that it would cost $443,200 to construct an additional 11.75-miles of line from Simmons to Peters Gap, an additional $40,000 to bring the existing 3.25-miles from Bluestone Junction to Simmons up to higher standards, and $50,000 to bore a 1,800-foot tunnel through Peters Gap. Other routes included utilizing the Mill Creek or Simmons Creek Branches to go through Flat Top Mountain, while another included a route up Crane Creek. 1 8

Construction of the East Fork of Simmons Branch began in May 1886 followed by the West Fork Branch Line of Mill Creek in August. 8 Work on rebuilding the first Bluestone River crossing along the Flat Top Extension with a stronger deck plate girder bridge with masonry abutments began in October and was finished in the following year.

In February 1887, a contract was signed with Walton & Evans to build the Flipping Creek Branch, an extension of the Flat Top Extension down the Bluestone River and up Flipping Creek with work being finished in 1888. 8

Much like its prior surveys and proposals, the N&W was actively interested in constructing a line toward the Ohio River as part of its Ohio Extension. It had conducted prior surveys that indicated a preferred alignment through Peters Gap but by April 1885, it began looking at utilizing its Mill Creek Branch or Simmons Creek Branch as a route to a tunnel under Flat Top Mountain and through the Pocahontas No. 3 coal seam. 8 In September 1886, an excavation was made to determine the location of a proposed tunnel along Mill Creek and in November, the decision was made to tunnel through Flat Top Mountain to serve coal lands that were being leased out along Elkhorn Creek at Maybeury and Switchback.

The N&W formally proposed the construction of a tunnel for its Elkhorn Extension in December 1886 and after reviewing bids, it selected Mills & Fairfax in February 1887 to construct a line from the end of the track of the Mill Creek Branch to a point along Johns Knob Branch with the South Fork of Elkhorn Creek. 8 Construction promptly began which required the relocation of the John Cooper & Company coal tipple at the head of Mill Creek, the construction of six wood trestles, and the boring of the Flat Top Tunnel, along with the erection of a temporary tipple to handle coal that was excavated from the tunnel bore. Track was laid through the new tunnel in August 1888 and the first coal was shipped by the Turkey Gap Coal & Coke Company operation at Ennis via the Elkhorn Extension shortly after.

The completion of the Flat Top Tunnel, which was renamed Elkhorn Tunnel in 1889, opened up eastern McDowell County and significant coal reserves to the railroad, 1 4 in addition to providing the N&W a route to the Ohio River. The line reached welch in 1891 and to other points west thereafter. 4

The N&W continued the grading past the end of track at Weyanoke to the summit of Clarks Gap but no rails were laid. 11 It was part of a push to connect to emerging coal mines of the Pocahontas Coal & Coke Company in Wyoming County and the Guyandotte River valley. 1 11 The railroad had a crew of 70 people working on a tunnel at Clarks Gap so that it could extend its trackage down Barkers Creek as the Guyandot & Tug River Railroad (G&TR) but it paralleled one that the Deepwater Railroad was constructing.

The right-of-way for the G&TR along Barkers Creek had been acquired by 1907 but the line and tunnel through Clarks Gap were stalled later in the decade because of their high construction cost. 11 Efforts were abandoned later in the 1920s after preliminary merger talks began between the N&W and the Virginian.

The Right Fork of the Widemouth Branch was completed in 1904 from the wye at Giatto to Wenonah, a distance of 5.1 miles. 11 It included a 2-mile spur up Big Branch to serve the Piedmont Coal & Coke Company, a 1.25-mile branch along East Prong, and a .45-mile branch along Shrewsbury Branch. It was extended 1.7 miles to Arista as the East Prong (and later Wenonah) Spur to reach the coal operations of the Modoc Coal Mining Company and the S.J. Patterson Pocahontas Company in 1914-15.

In September 1902, a lower grade alignment was completed for westbound traffic climbing the torturous grade to the Elkhorn Tunnel. 9 Work started in September 1900 by Walton & Company and involved the construction of 2.1 miles of single track, a 698-foot tunnel (Cooper Tunnel), and a 586-foot deck plate girder viaduct. The new low-grade line saved a little under one mile in distance, eliminated 500 degrees of curvature, and reduced the westbound grade from 2.23% to 1.1%. At this point, the Flat Top Extension was renamed the Bluestone Branch. 1 8 Eastbound traffic continued to follow the Mill Creek Branch and the Bluestone Branch.

In 1917, a portion of the Bluefield Branch was electrified as part of N&W’s efforts to electrify its mainline between Bluefield and Vivian. 9

In 1922, work began to double-track its low-grade line in the vicinity of the eastern portal of the Elkhorn Tunnel which involved widening Cooper Tunnel and twinning its Bluestone River bridge. 9 This allowed eastbound trains to use the low-grade line and allowed the N&W to abandon the use of its Mill Creek Branch for through trains.

Electrification of the Bluefield Branch ceased in June 1950 when the N&W abandoned all of its electric locomotives with the opening of the new Elkhorn Tunnel. 9 In 1953, passenger service along the Bluestone Branch ceased. 1

In 1927, the Pawama Coal & Coke Company shut down, the first along the Bluestone Branch to do so. 11 By 1940, just 13 major coal operations were remaining, winding down to 10 mines by 1950. Only three major operations remained in 1960 at McComas, Wenonah, and Arista. The mines at Arista closed in 1966, followed by Wenonah in 1983 and an operation along Crane Creek at McComas in 1984. The mines along the Bluestone Branch and its spurs had produced nearly 195 million tons of coal.

The last movement over the Bluestone Branch was in 1996 when Norfolk Southern transported several cars to Bramwell for an interpretative display. 1 The first two miles of the line between Bluestone Junction and Coopers remain active only for the storage of empty rail cars.

Branches that diverged from the Bluestone Branch and Widemouth Extension included:

Crane Creek Branch, a 7.5-mile branch from Flipping Creek Junction to Mannering and Mora, 1 2 3 was authorized in March 1901 when construction contracts were signed with Walton, Witten & Graham of Graham, Virginia. 11 Grading on the line was completed by June, and by the spring of 1902, the branch was all but complete. It included a station at Montcalm Junction where the Widemouth Branch intersected.

The last mine along the Crane Creek Branch ceased operations in October 1984 and was the last operation along the Bluestone Branch. 11

Flipping Creek Branch was constructed in 1887-88 as an extension of the Flat Top Extension down the Bluestone River and up Flipping Creek. 1 3 11

The half-mile Mill Creek Branch diverged from the Bluestone Branch at Coopers and climbed up Flat Top Mountain along Mill Creek to service several coal mines. 1 When construction of the Flat Top Tunnel for the future N&W mainline began in February 1887, the branch was extended to the east portal. The route served as the mainline until a single track, lower grade route was completed between Bluestone Junction and Flat Top Tunnel in 1902. It included the construction of Coopers Tunnel and a large trestle over the Bluestone River.

The West Fork Branch Line of Mill Creek was built in August 1886. 11 The entire branch line was abandoned in the 1940s as the right-of-way was needed to construct the Elkhorn Tunnel through Flat Top Mountain and a new trestle over the Bluestone River which opened in 1950. 1

Booth Bowen’s operations ceased in 1938 followed by Caswell Creek in 1940. 11 After Buckeye Coal & Coke closed in 1948, the East Fork branch line remained in operation until 1968 to serve truck load-outs. 11 It was then retired and the entire branch up Simmons Creek was removed in the mid-1980s. 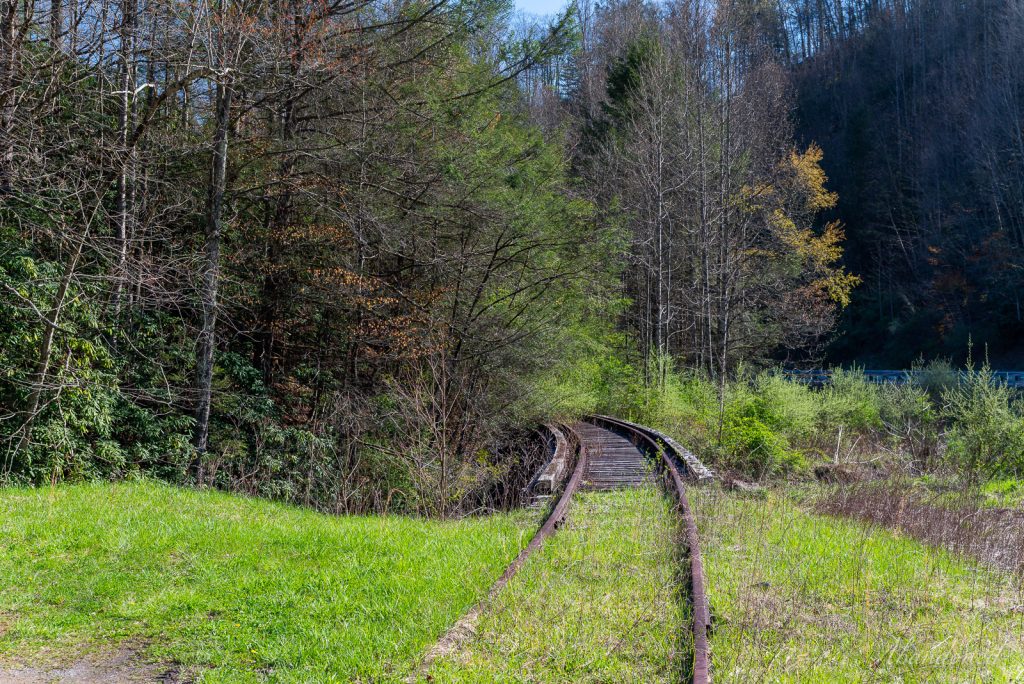 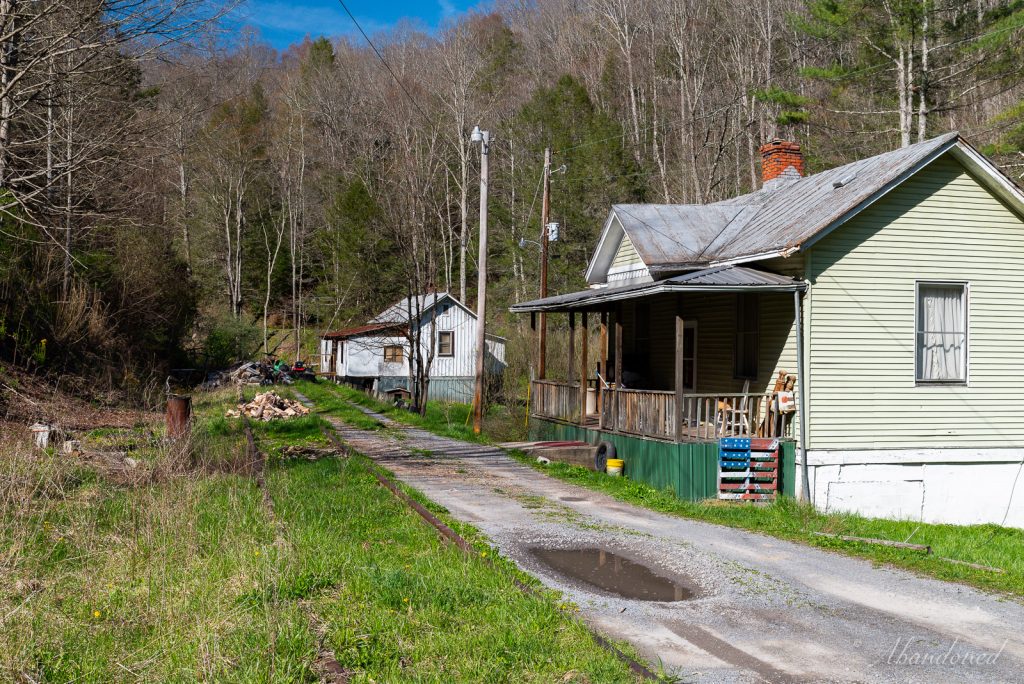 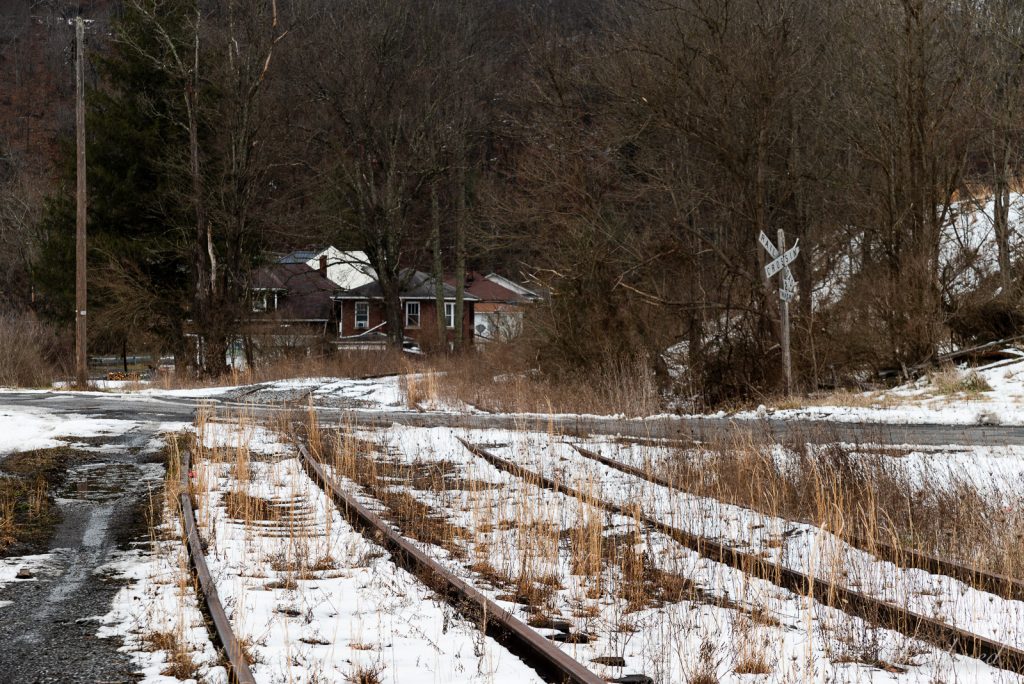 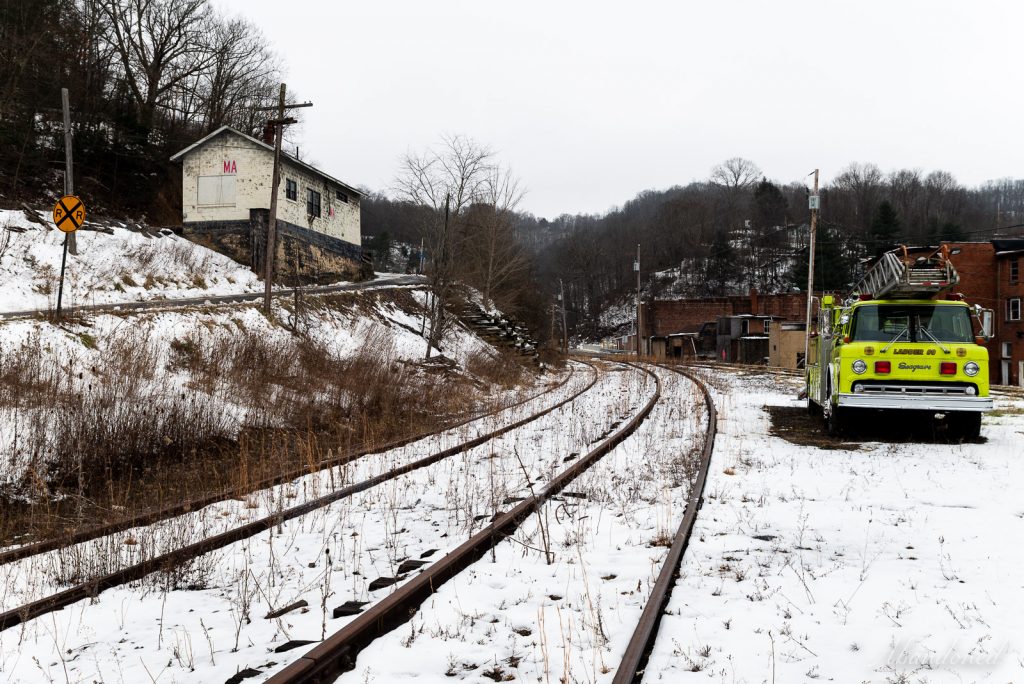 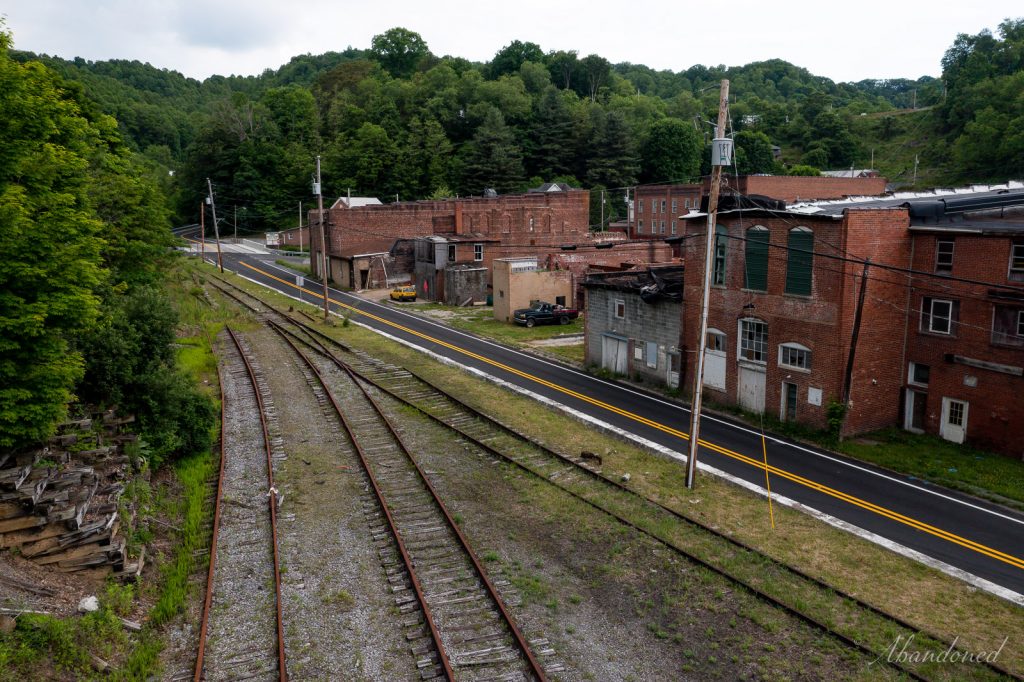 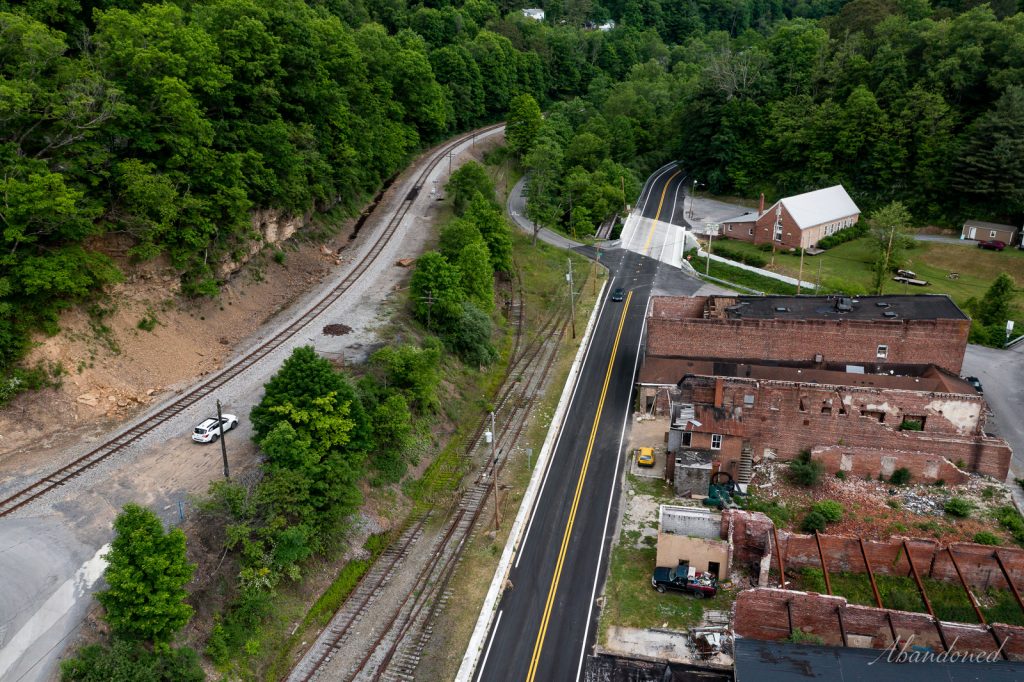 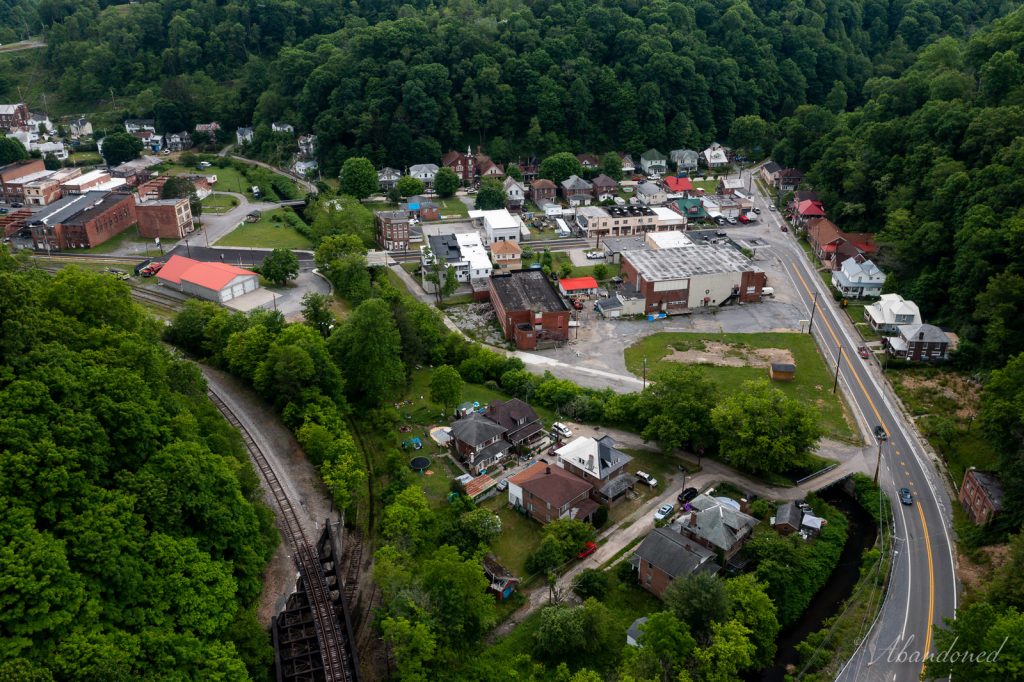 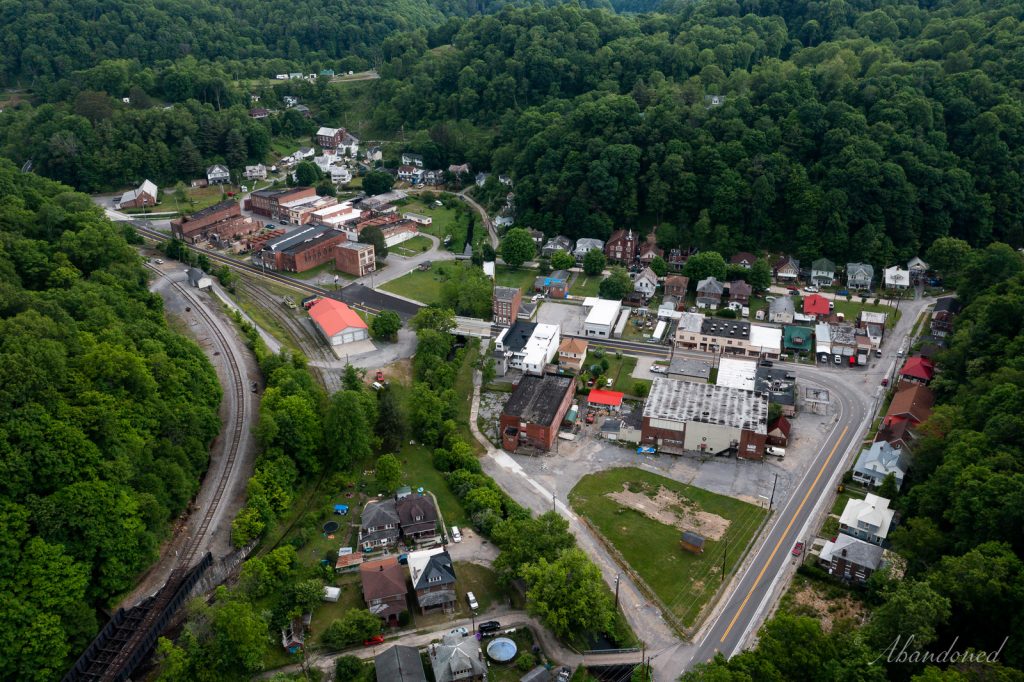 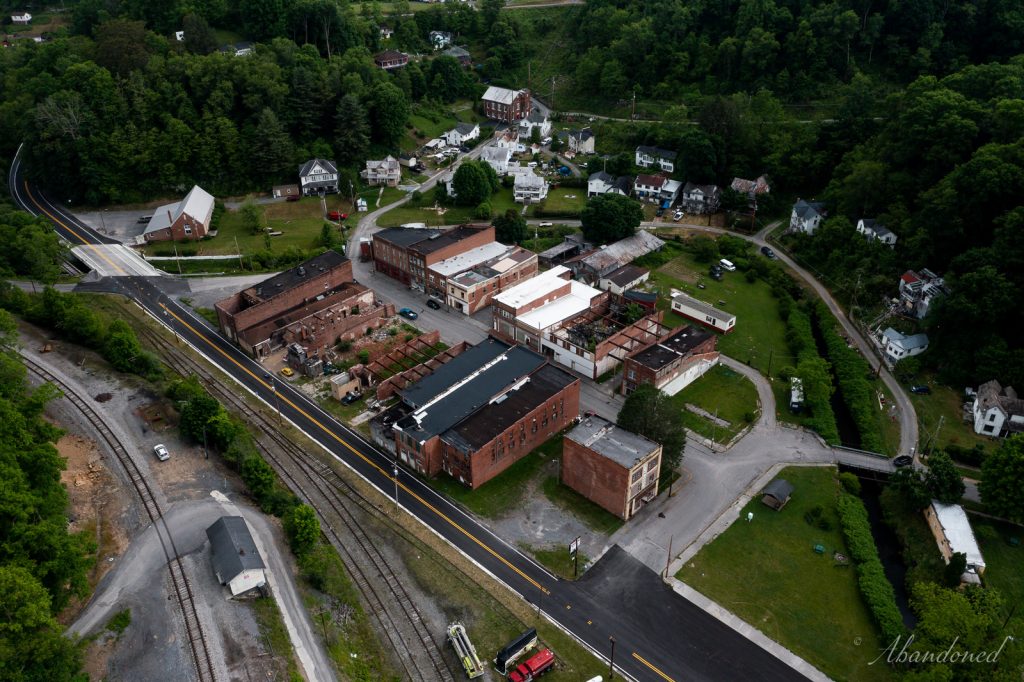 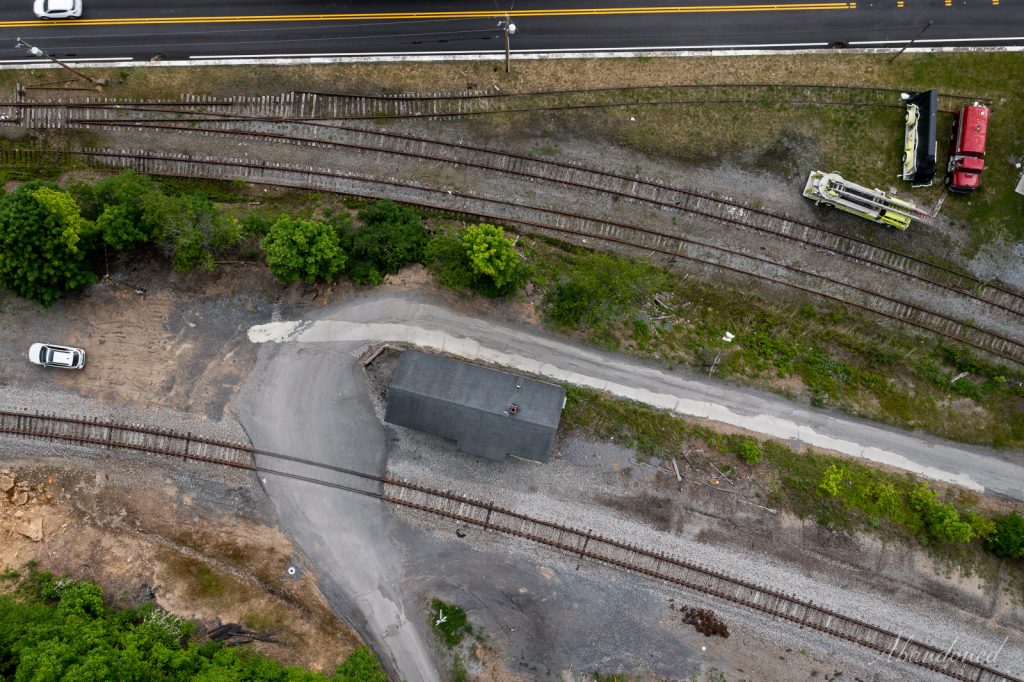