The Rubber Bowl, a former stadium in Akron, Ohio, was home to the University of Akron Zips football team between 1940 and 2008.

The University of Akron developed intercollegiate athletic teams in the 1920s to provide athletic interests to its growing student body. Up until 1907, the college was known as Buchtel College and part of the Universalist Church with less than 200 students. It shed its religious order to receive funds from the Carnegie Foundation, which would not give money out to schools affiliated with the religion. In 1913, Buchtel College trustees transferred the school to the city of Akron. It was renamed the Municipal University of Akron.

In 1925, a campus-wide contest was held to choose a nickname for its athletic teams. Suggestions included Golden Blue Devils, Tip Toppers, Rubbernecks, Hillbillies, Kangaroos, and Chevaliers. The winner, from freshman Margaret Hamlin, was “Zippers.” Zippers were fashionable rubber overshoes manufactured by the Akron-based BF Goodrich Company. The name Zippers became Zips in 1950.

Owing to the university’s growth, Buchtel Field became overcrowded by the 1930s. This lead Akron Beacon Journal sports editor James Schlemmer and Akron Municipal Airport director Bain Fulton to wage a campaign in 1939 to construct a modern football stadium. Schlemmer and Fulton asked patrons to donate $1 towards the effort. As a result, the Works Progress Administration (WPA) authorized the construction of a stadium in south Akron next to Soap Box Derby venue Derby Downs. 1

The new city-owned stadium, designed by the Osborn Engineering Company, was constructed for $546,000. The first event, a state music and drill competition, was held in June 1940. The 32,202 seat venue was dedicated in August before a crowd of 36,000 before the running of the seventh Soap Box Derby. 1

The Zips played their first game in the stadium on October 5; the first game was on November 9. 1 It was not until September 30, 1961, that the team reached their first sellout. In 1971, the University of Akron purchased the stadium for $1 from the city. An artificial playing surface was installed in 1983 and replaced in 2003 with AstroPlay.

The Rubber Bowl was also used by the Kent State University Golden Flashes football team during the 1940s before the completion of Memorial Stadium in Kent in 1950. The Cleveland Rams of the National Football League (NFL) played two regular-season games at the stadium in 1941 and 1942, and the NFL’s Cleveland Browns used the stadiums for 19 preseason games. A “home” game for the troubled Dallas Texans was hosted on November 27, 1952, who went on to record their only win in franchise history. It was a 27-23 victory over the Chicago Bears. 4 The Rubber Bowl was also used for 1,500 football games for various high schools in the city, as well as playoff games for the Ohio High School Athletic Association (OHSAA).

Notable games at the Rubber Bowl included the highest-scoring game in the stadium’s history, a 65-62 victory over Eastern Michigan in 2001, a 65-7 win over Howard University in 2003, and a 35-3 win over Kent State that secured Zips first Mid-American Conference East Division title and a spot in the 2005 MAC Championship game. 1 The stadium was also the host of Zip’s first ESPN appearance in 1986.

The stadium also hosted the Ringling Brothers and Barnum & Bailey Circus on July 6, 1944, and many musical acts, such as Simon & Garfunkel, The Rolling Stones, Bob Dylan, The Grateful Dead, and Alice Cooper, from the 1970s to the 1990s. 5

The University of Akron initiated a feasibility study for a new stadium in 2003. The Rubber Bowl was aging, requiring significant rehabilitation and costly upgrades. 1 It was also far removed from campus, which depressed sales of tickets to Zips games.

On August 1, 2007, the university’s Board of Trustees approved the financing and construction plans for a new stadium. 1 Construction began on January 25, 2008, when old dormitories were razed. 3 Excavation for the foundation started on February 18, and a groundbreaking event was held on April 4. The stadium was “topped out” on October 21.

The last game in the Rubber Bowl, the Zips 324th, was hosted on November 13, 2008, against the Buffalo Bills. 1 The Bills defeated the Zips 43-40 in four overtimes in front of a crowd of 18,516. After the conclusion of the game, current and former players and coaches were honored on the field. 1 2 3

The Zips held their first game in the new InfoCision Stadium on September 12, 2009. 3

The Rubber Bowl was purchased in January 2013 for $38,000 by Team1 Marketing Group of neighboring Canton. 6 7 Team1 had plans to renovate the stadium for the Akron Fire, a professional football team for the United States Football League (USFL). Team1 noted that although the InfoCision Stadium was newer, the Rubber Bowl would be able to generate more revenue due to the university’s ability to control concession and marketing rights on their own facility. Team1 proposed renovating the press box, locker rooms, and concession areas, and installing new seats and scoreboards.

The first event scheduled for the Rubber Bowl, a hip-hop concert and party known as LOUD-Fest, was set for May 15. 11 It was postponed due to concerns over the condition of the stadium. 12

Without a feasible tenant, demolition of the Rubber Bowl began on June 20, 2018, by the Eslich Wrecking Company. 13 About 60% of the stadium will be removed by the end of October. The side nearest to George Washington Boulevard will be left intact as it is not feasible to tear down without disrupting the roadway. The $200,000 project is being paid for through a $100,000 state grant, $50,000 from the Summit County Land Bank, and $50,000 from the city. 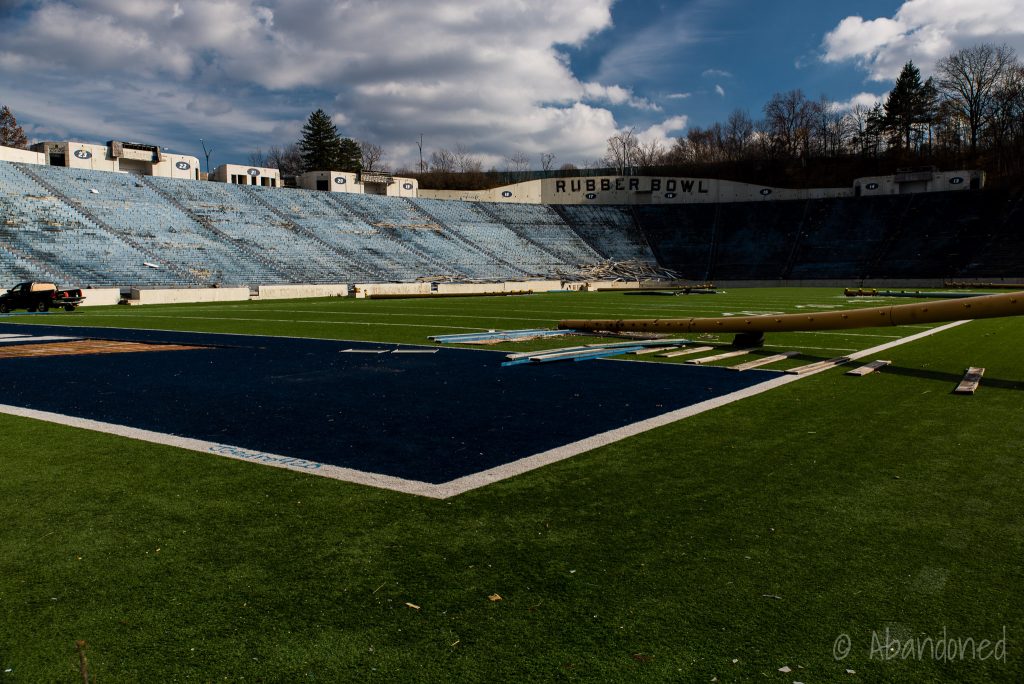 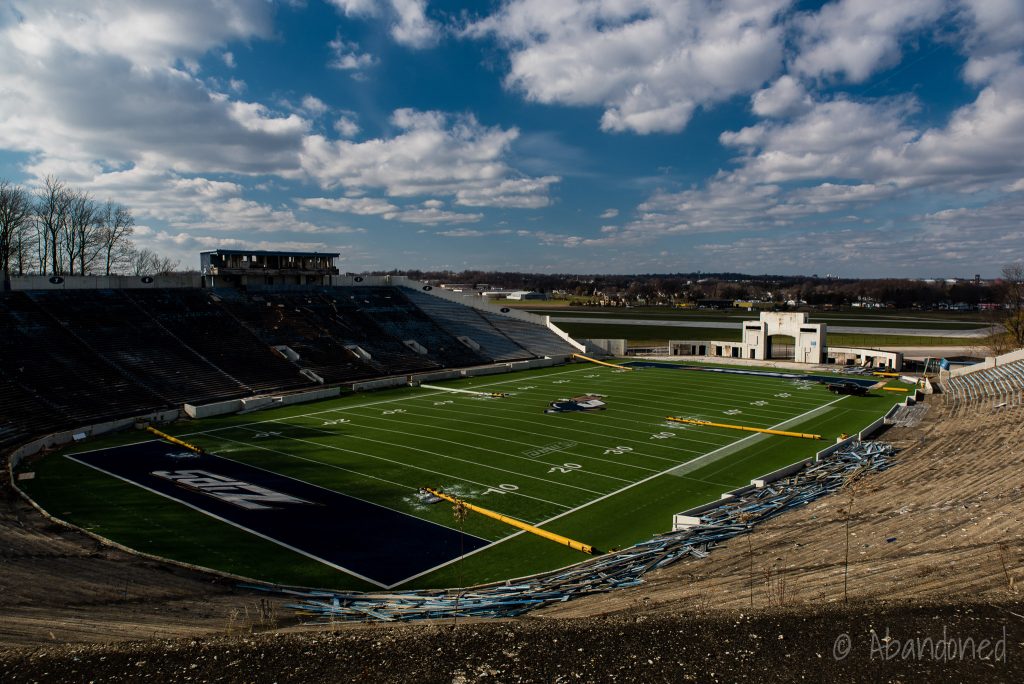 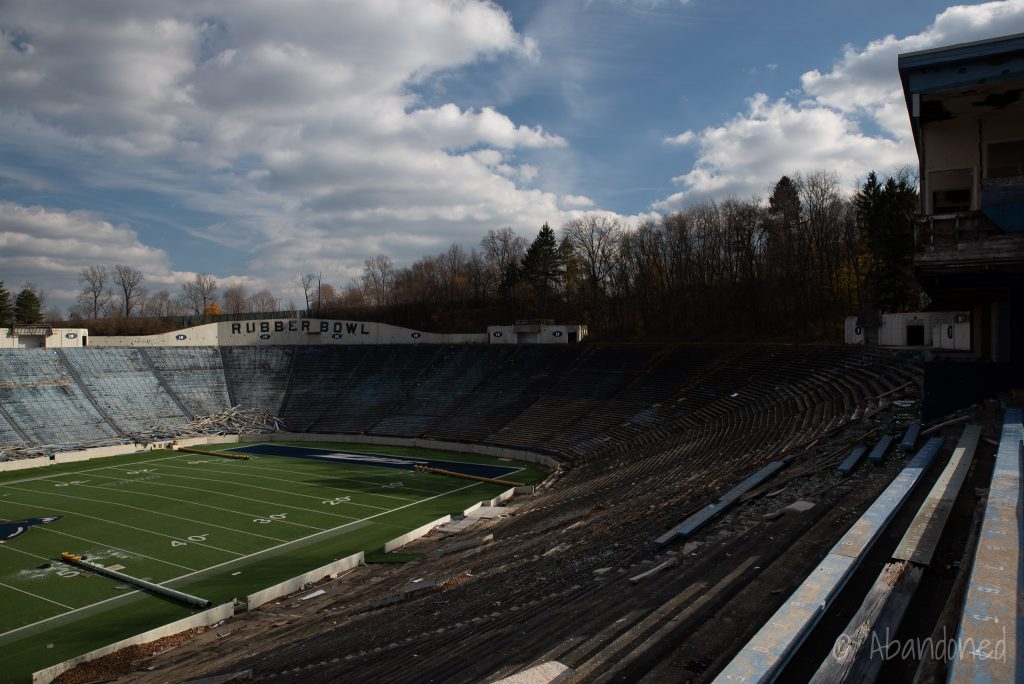 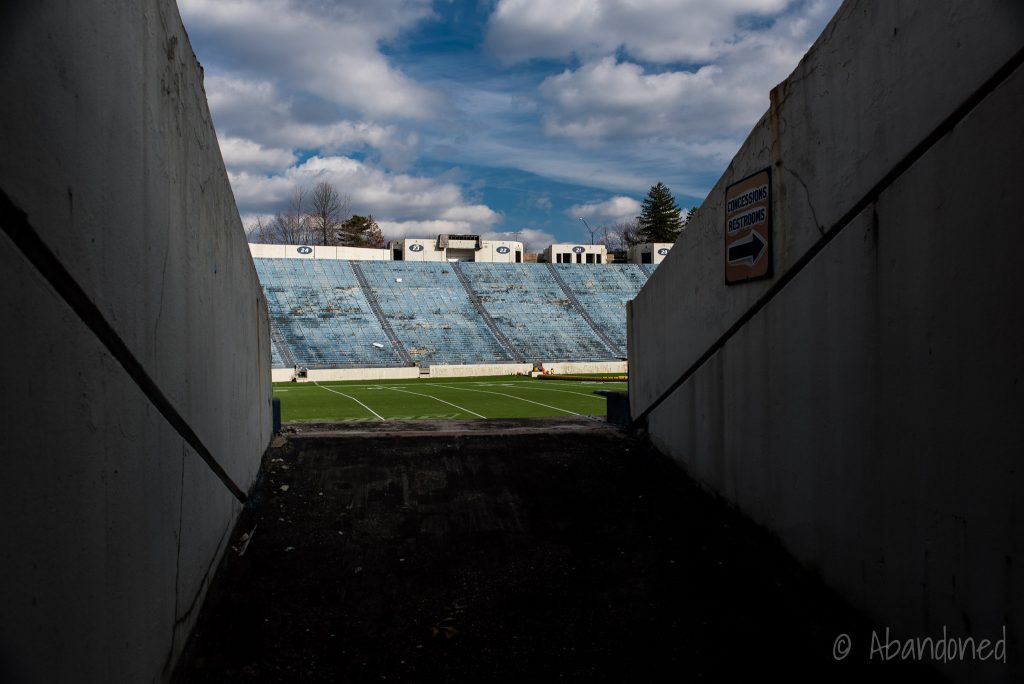 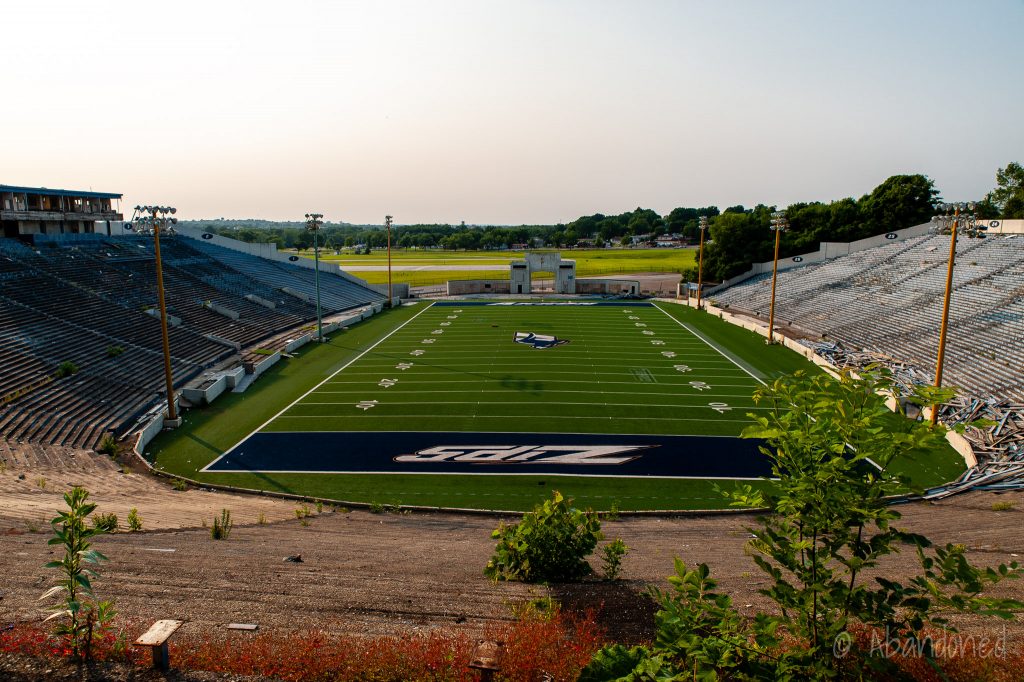 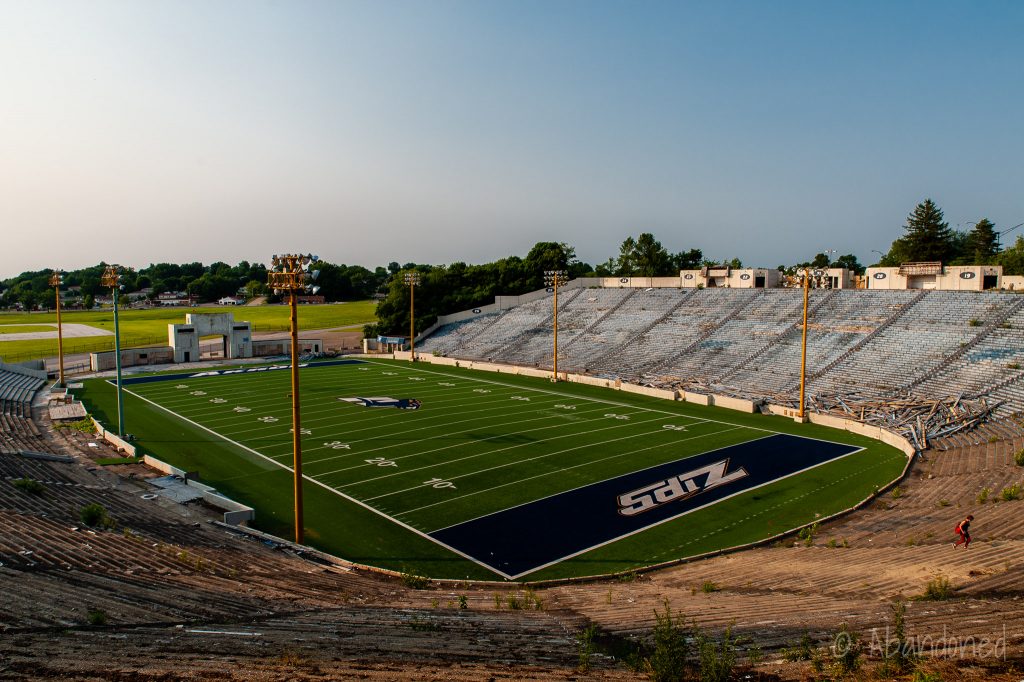 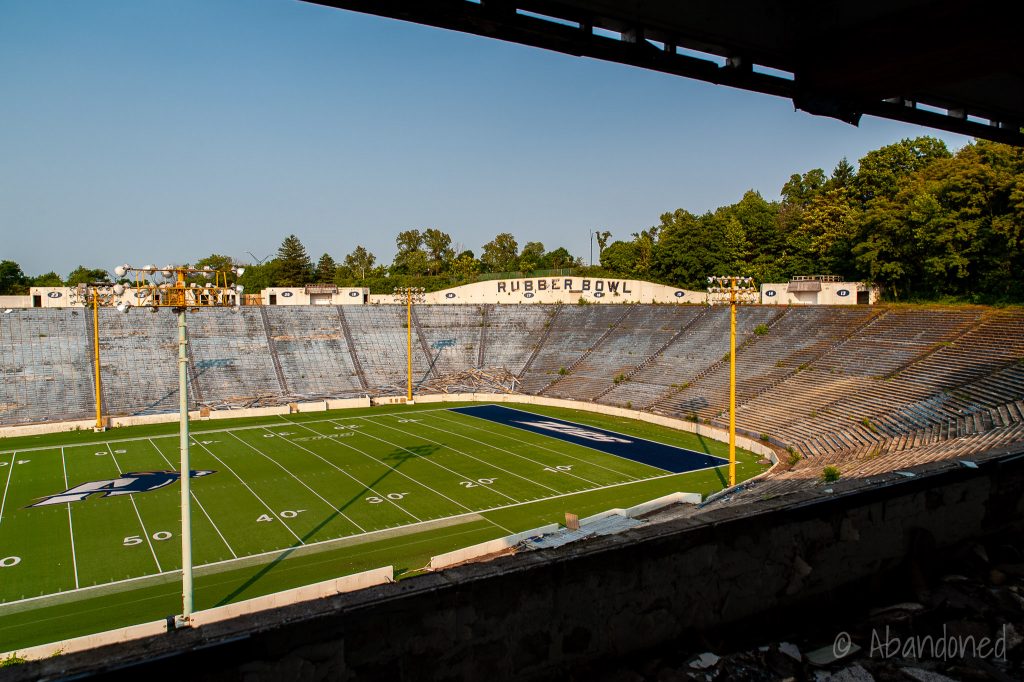 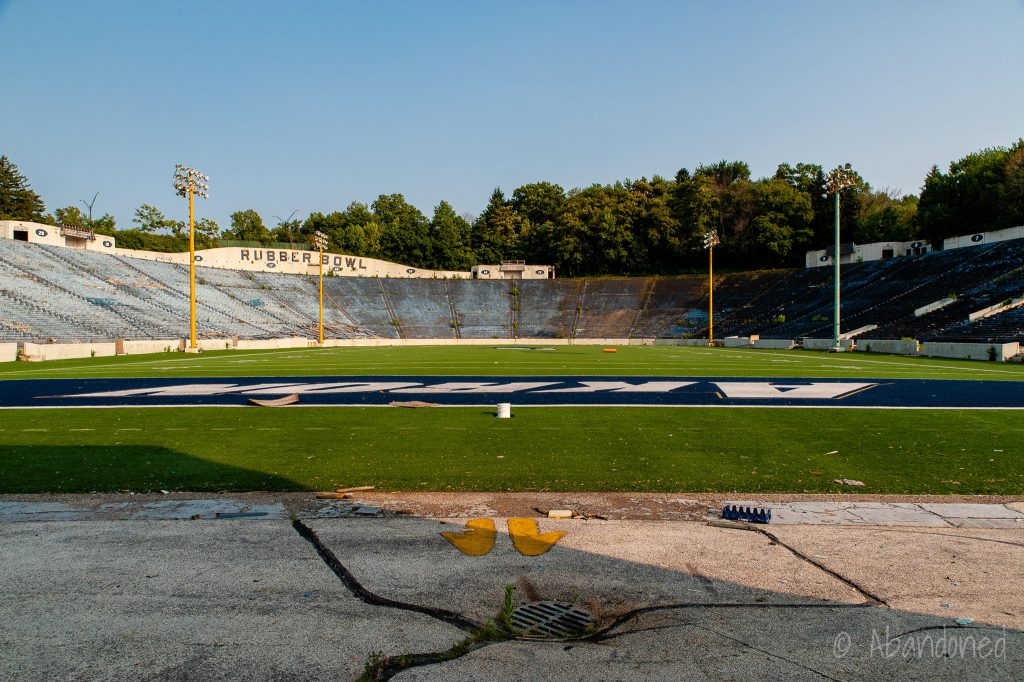 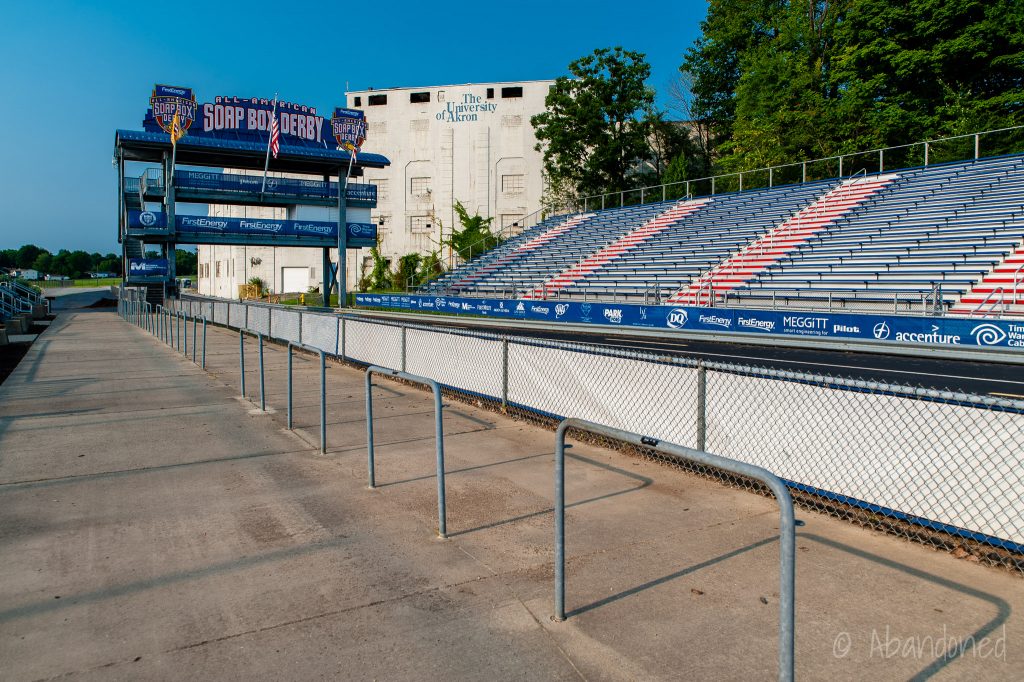 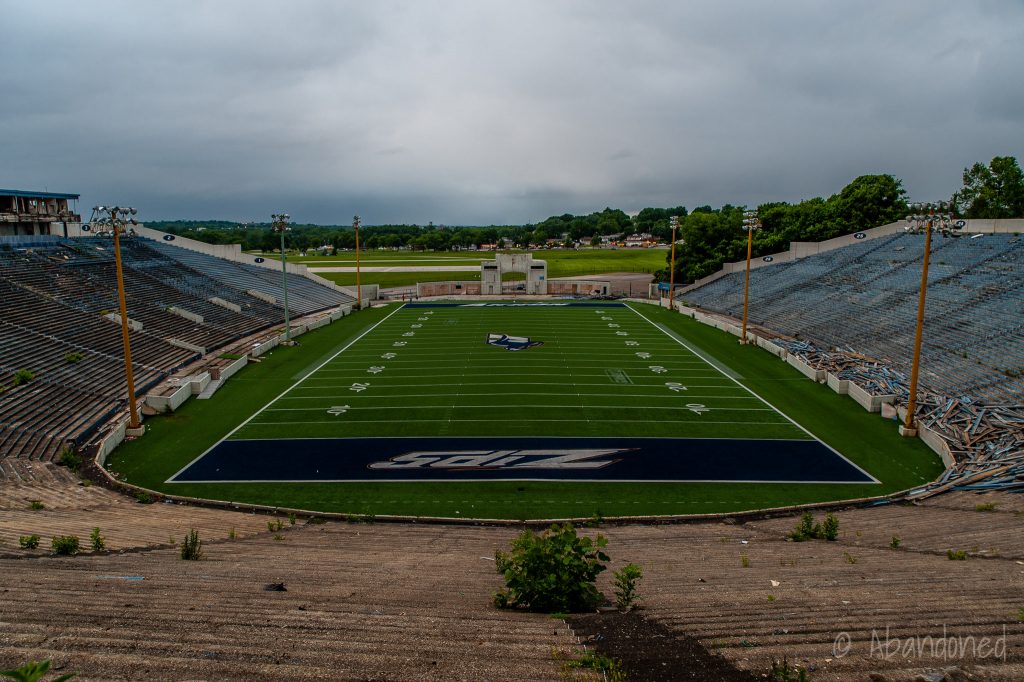 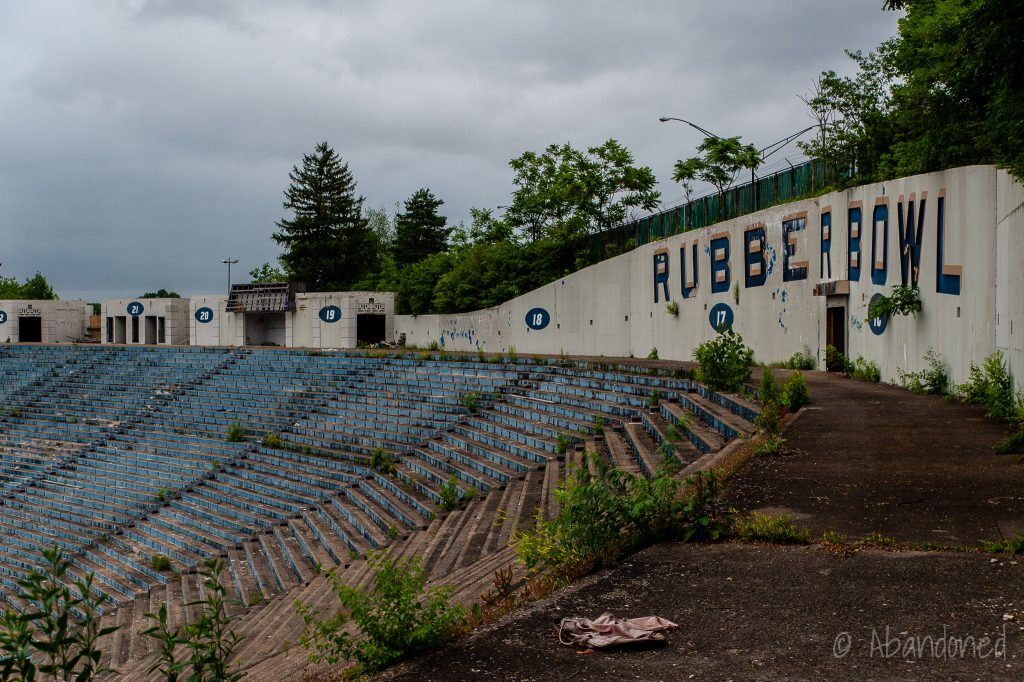 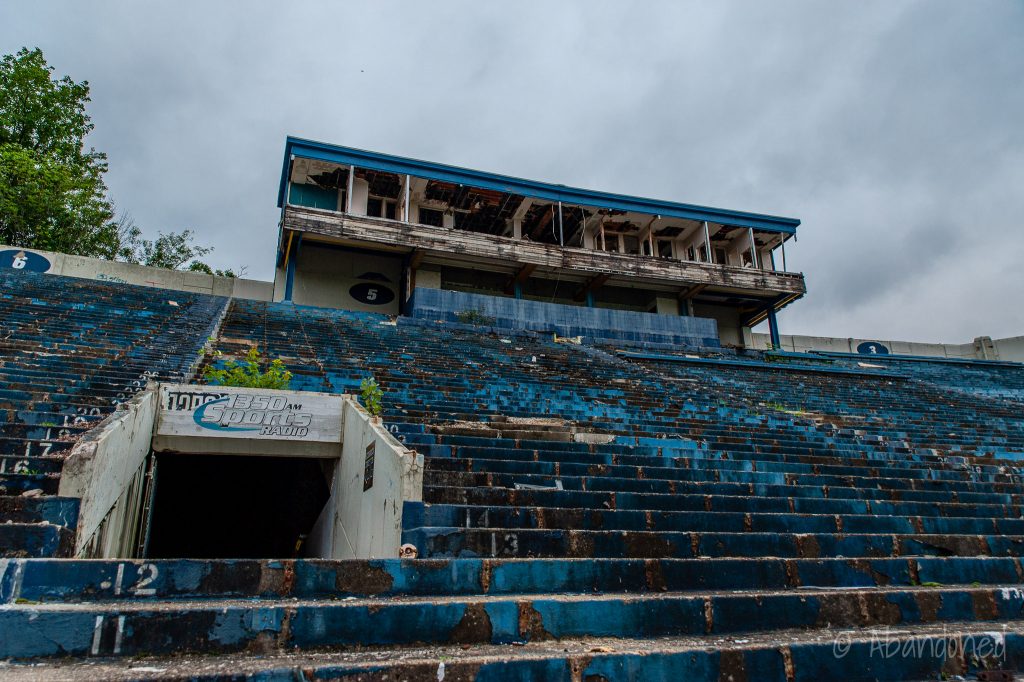 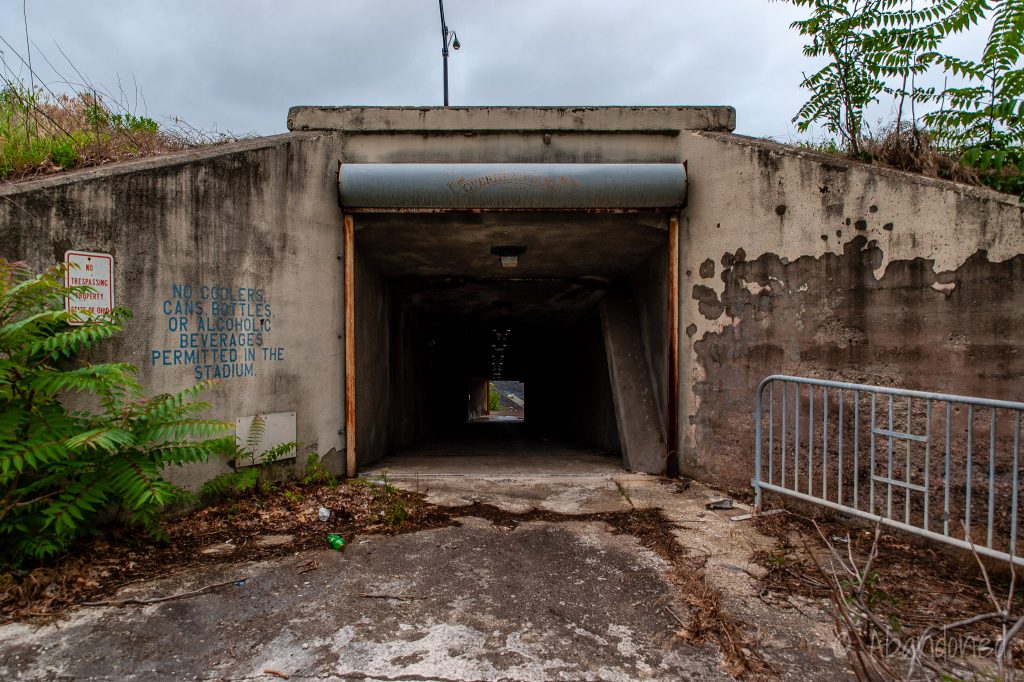 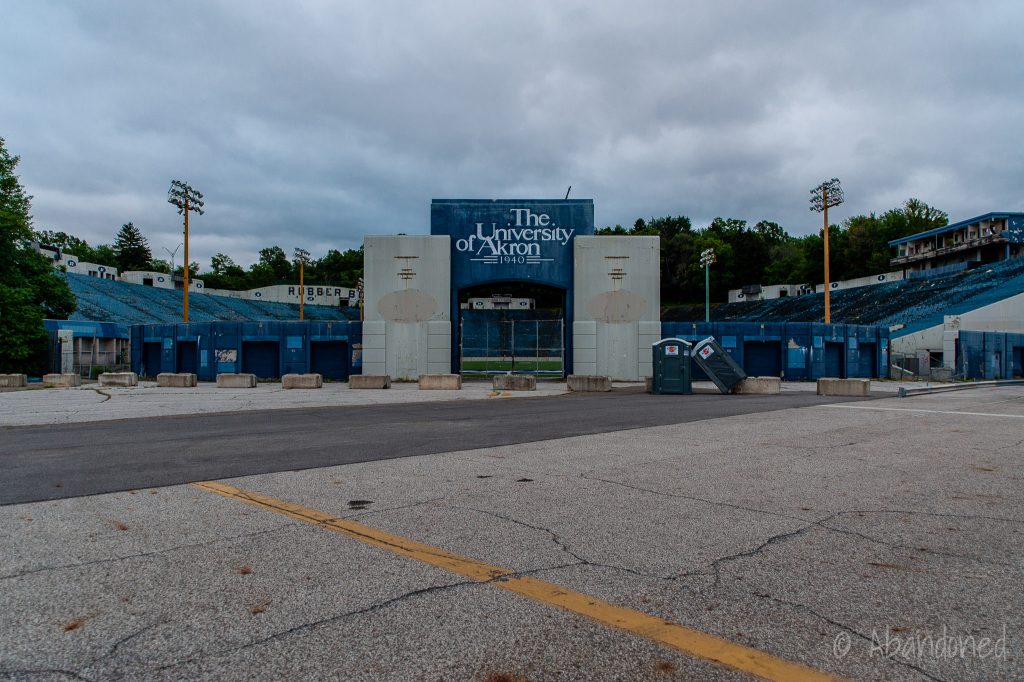