The Van Nattas Pumping Station, located in Ithaca, New York, was constructed by the Ithaca Light & Water Company in 1893. It was built on the site of the Van Natta & Jones Mill. 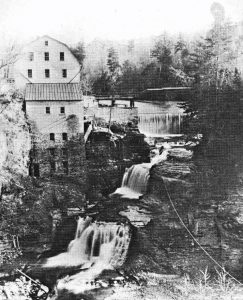 The Van Nattas Pumping Station, located in Ithaca, New York, was constructed by the Ithaca Light & Water Company in 1893. It was built on the site of the Van Natta & Jones Mill.

Long abandoned since the 1940’s, the pumping station had a major role in developing Ithaca. The pump station featured three Worthington & Dean steam pumps and three Gould high-pressure fire pumps. All of the pumps could be used interchangeably to deliver raw or filtered water to the filter plant, to the masonry work reservoir on South Hill or to the high-pressure service line for fire protection on East Hill. In 1901, the first water storage tank in the city was built at Mitchell Street. The utility followed up by drilling six artesian wells in Inlet Valley at a cost of $125,000 a year later. The wells were not very productive; to compensate, air compressors were installed at the pumping station to increase the flow.

Frustrated, the Ithaca Water Company constructed a 30-foot dam just upstream of the pumping station, connected via a 24-inch cast-iron aqueduct along the creek to supply water to the pumping station from the newly formed reservoir. Additionally, one-hundred new fire hydrants and new main water lines were installed throughout Ithaca.

In January 1903, Ithaca was ravaged by the typhoid epidemic, which resulted in 1,350 cases and 85 deaths. It was ascertained that those who drank from the new reservoir suffered from the epidemic due to the unsanitary conditions that were found during the construction of the dam. On March 2, the city voted to construct a purification plant for the city and plans by Allen Hazen, in cooperation with Gardner S. Williams and the New York Continental Jewell Filtration Company, was drawn up by March 12. Construction on the new purification plant began on March 27 and it was operational by August 19.

In 1906, the city installed more powerful pumping machinery at the pumping station. It allowed for additional water pressure and resulted in a main water line being constructed across Fall Creek at Triphammer Bridge to Cornell Heights. On December 27, 1911, it completed work on a 60-foot dam to supply additional water to the city, which formed Potters Fall Reservoir. Hydraulic turbines were installed at the pumping station to make use of the increased water power. A smaller siltation dam was constructed in 1925 as a pre-settling basin.

In 1980, the state of New York enacted legislation to develop alternate energy sources by encouraging cogeneration and small hydroelectric power plants. The New York State Electric and Gas Company submitted a proposal in September 1984 to reopen the Van Nattas Pumping Station to use as a hydroelectric power plant at a cost of $1,020,800. The proposal was never enacted.