Construction of Forest Fair Mall by L.J. Hooker began in 1986. 11 The east wing of the mall opened in July 1988 with Bigg’s hypermarket and value-oriented inline tenants. Complications with leasing delayed the opening of the west “fashion” wing with upscale tenants until March 1989. Combined, Forest Fair featured 1½-million square feet with four anchors, Parisian, Elder-Beerman, Bonwit Teller, Bigg’s, and B. Altman, and 200 stores. 3

Hooker was saddled with debt. Construction costs that were estimated at $200 million came in at more than $250 million. By June, Forest Fair was for sale, and in September, Hooker sought bankruptcy protection with claimed debts of $1.7 billion. B. Altman and Bonwit Teller, two retailers that Hooker had purchased in mid-1987, also filed for bankruptcy protection. 11 Bonwit Teller closed in October 1990, followed by B. Altman and Sakowitz in November 1990.

In January 1991, Hooker’s seven lenders took over the mall’s operation as FFM Limited Partnership. 11 With uncertainty in the shopping center’s future, occupancy dipped to 56%. As part of a $25 million rebranding effort, 13 Forest Fair was renamed to Malls at Forest Fair in May 1992. Additionally, the concourses were divided into four retail themes: fashion, lifestyle, value, and entertainment.

In August 1993, FFM spent $8 million to create the Festival at Forest Fair, a themed restaurant and bar district in the former Bonwit Teller. Kohl’s opened in the old B. Altman location in September 1994. By the end of the year, the occupancy rate had climbed to 75%. 11

FFM placed Malls at Forest Fair on the market in February 1995. 11 Gator Forest Park Partners of Miami acquired the mall for $18 million in 1996. Gator envisioned Forest Fair as a destination outlet mall, 3 7 10 and pledged to invest $10 million into the mall over the next three years. 11

Parisian left the mall in June 1998. 11 Shortly after, a first-run multiplex movie theatre opened on the lower level in the food court, replacing the Time Out game arcade. Saks Off Fifth signed open as an anchor outlet store in August 2000 followed by Burlington Coat Factory in October and Bass Pro Shops in November. Wonderpark Family Fun Center, an indoor children’s amusement park, opened in September 2001. Two public parking garages were built in 2002. 20

The Mills Corporation purchased Forest Fair Mall for $69.4 million in 2002 and subsequently began a $70 million renovation project in February 2003. 2 3 4 10 21 The project was aided by $19 million in tax increment financing for parking improvements. 4 Forest Fair Mall, rededicated on August 19, 2004, was renamed Cincinnati Mills.1 10

Cincinnati Mills thrived with three anchors, 145 inline tenants, several themed restaurants and nightclubs, two movie theatres, and a 93% occupancy. It was projected that in a total build-out, the mall could support 15 anchors and 200 retailers. 2

The Mills Corporation was in dire financial straits by April 2006. 3 6 Cincinnati Mills had declined to 115 tenants by mid-summer and the shopping center had become one of the weakest performers in the Mill Corporation’s portfolio. 5 Sales per square feet were less than half the average for similarly sized facilities. By December, occupancy was down to 66%. 8 Brookfield Asset Management and Simon Property Group purchased the Mills Corporation for $1.6 billion on January 16, 2007. 6 14

Cincinnati Mills was a contender for IKEA, a Swedish home furnishings retailer, in 2007. The deal ultimately fell through after IKEA announced that it was locating in West Chester. 7 In June 2008, Bigg’s closed its hypermarket due to slumping sales. 9 The store had recently partitioned off sections of its store and attempted an outlet store concept. By September, only 56% of the mall was leased, including 60% of the anchor space and 47% of the inline retailer space. 14

North Star Realty of Georgia purchased the mall in January 2009. 15 The company soon became delinquent on property taxes and payments relating to the construction of the parking garages in 2002. 20

Cincinnati Mills was purchased by the Cincinnati Holding Company, a subsidiary of World Properties Inc. of New York, for $4.7 million on March 4, 2009. 19 It was renamed Cincinnati Mall. In a move to restore the mall’s viability, Cincinnati Holding sought non-traditional tenants to fill the empty mall.

The bleeding of tenants only accelerated. The first-run movie theatre, Showcase Cinemas, closed on February 28, 2010. 16 17

Cincinnati Holding owed the city of Forest Park $2.5 million for annual assessments, which were charged instead of property taxes due to tax reductions that were given during a renovation in 2003. 21 The mall also owed the Winton Woods City Schools Board of Education $200,000. Cincinnati Holding worked out a payment schedule with the Port of Greater Cincinnati Development Authority to pay any late assessments and taxes owed to Forest Park and Winton Woods.

Cincinnati Holding announced radical changes to the mall in January 2011. 18 The proposal included a three-level Candlewood Suites, a 100,000 square-foot ice hockey arena, an indoor mountain bike facility, a 76,000 square-foot agriculture museum, and an indoor water park. 22 The Candlewood Suites would be located inside the former Steve and Barry’s store. 19 The ice hockey arena and water park would be situated in the old Bigg’s anchor. It was projected that the proposal would create 2,000 jobs. 18

In October 2013, Bass Pro Shops, one of the only remaining anchors of Cincinnati Mall, announced that its store would close in favor of a larger facility in West Chester. 23 The new store, at Union Center off of Interstate 75, would feature 150,000 square feet of retail with an Uncle Buck’s Fishbowl and Grill and a bowling alley. The new Bass Pro Shops facility was never built. 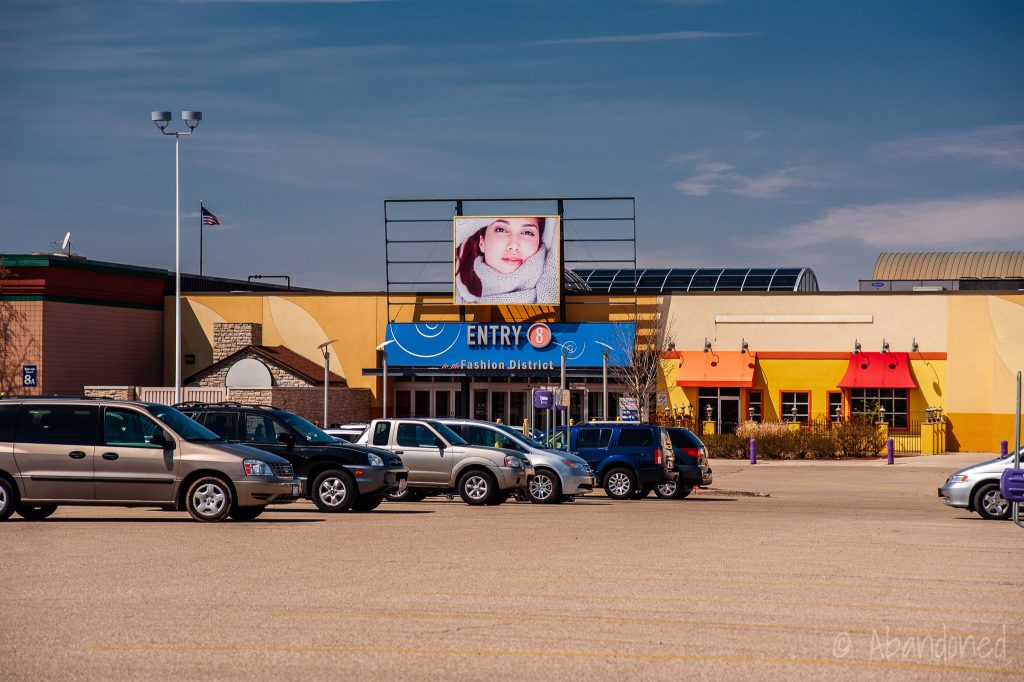 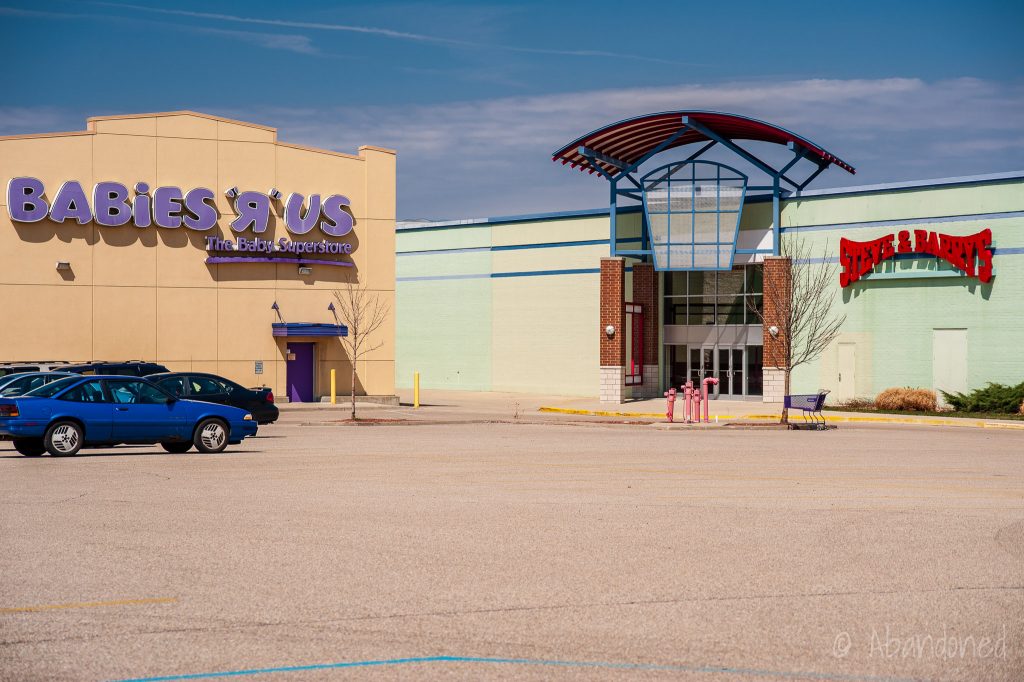 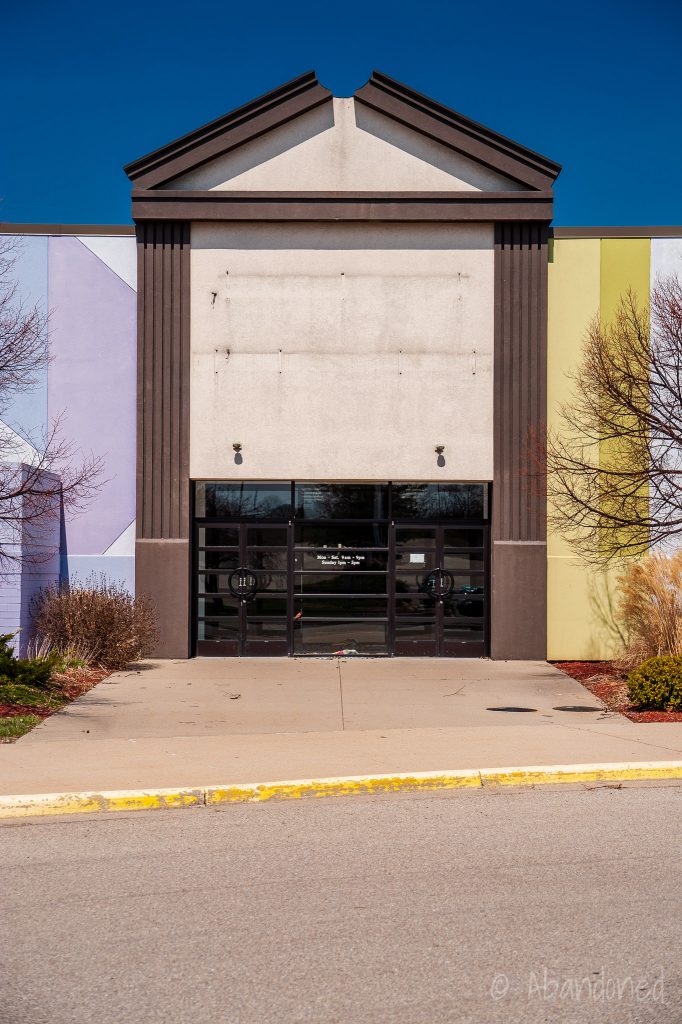 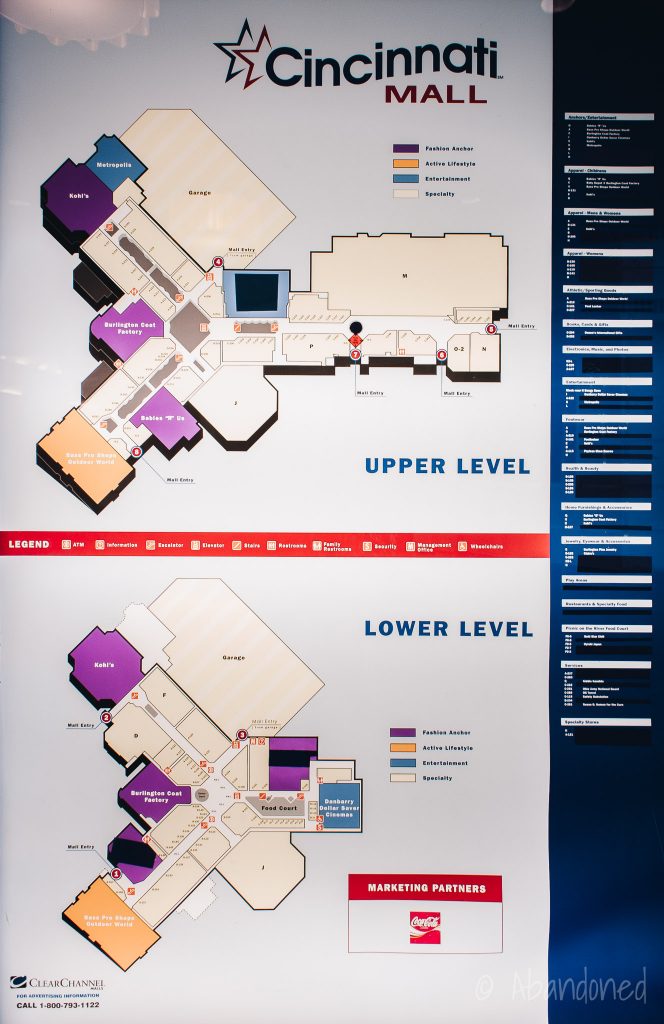 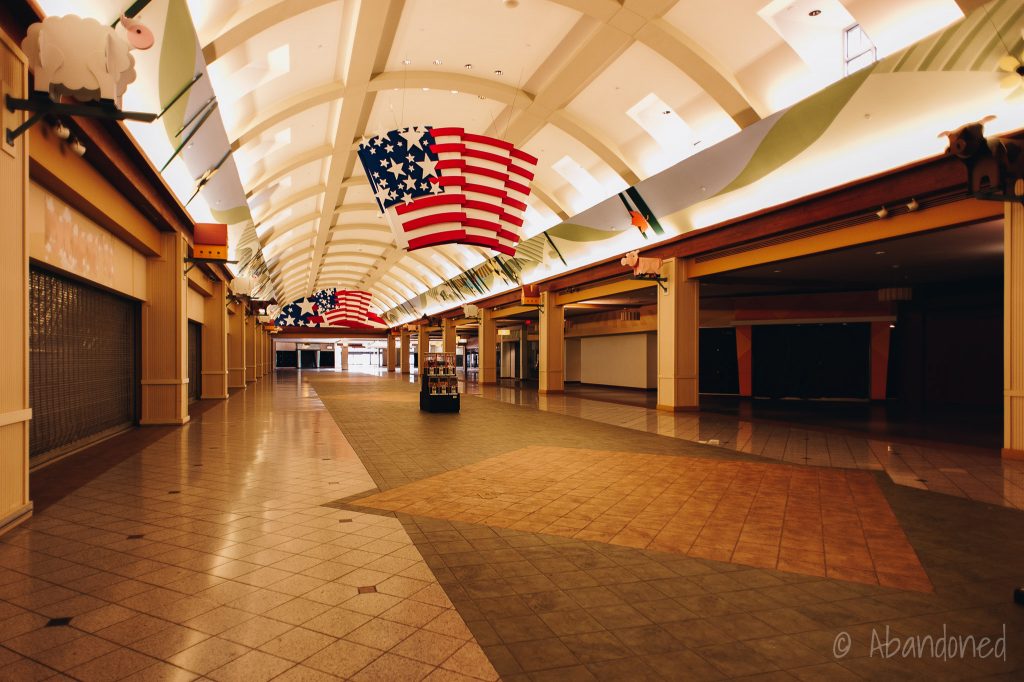 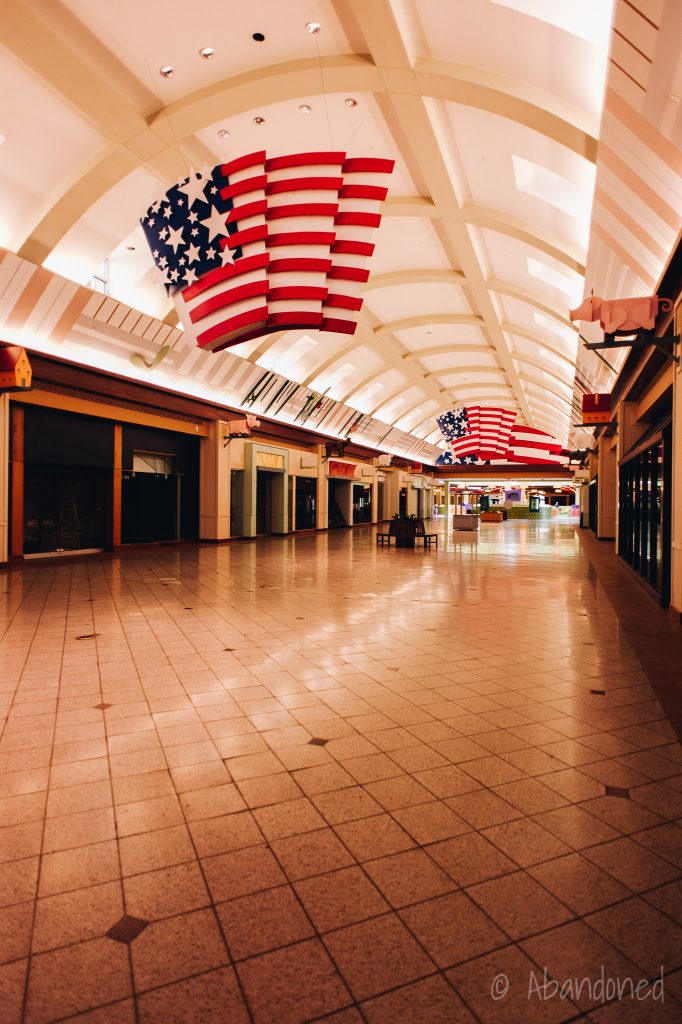 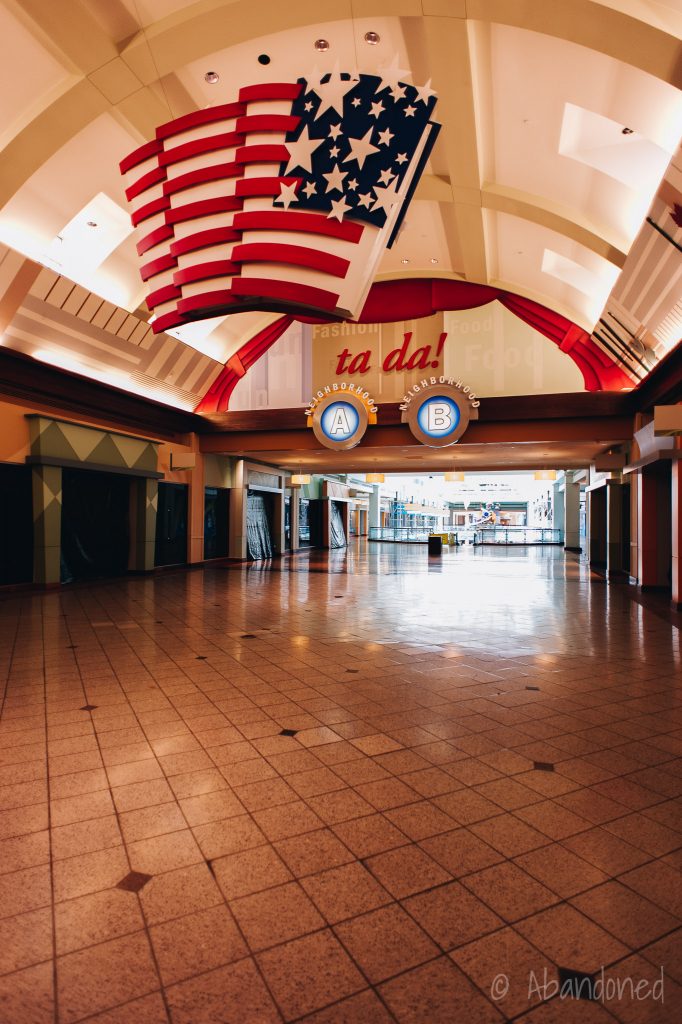 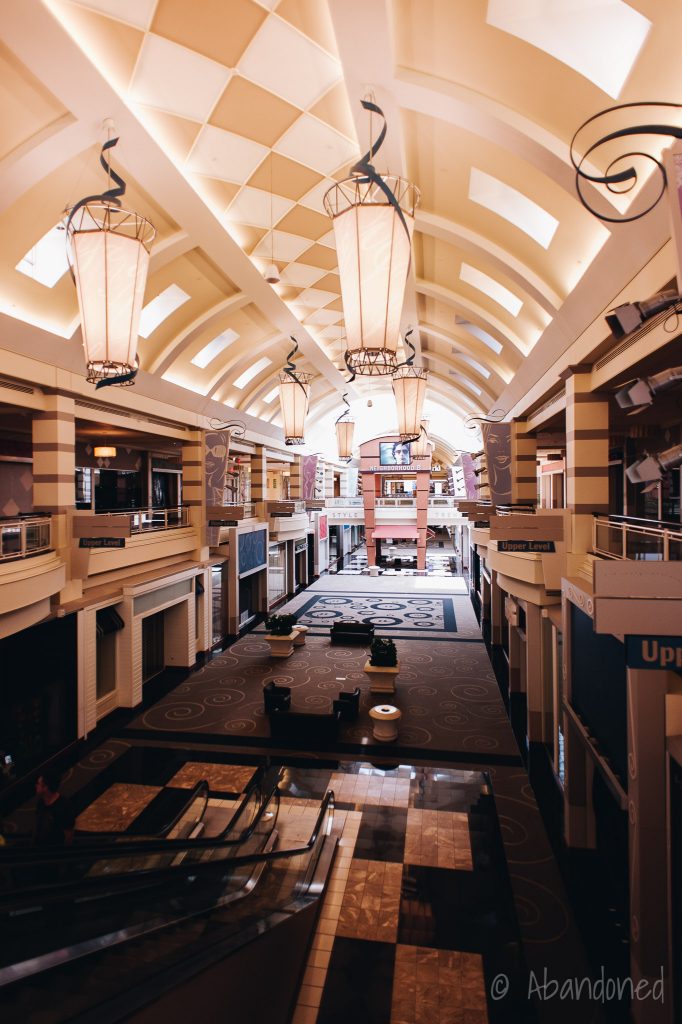 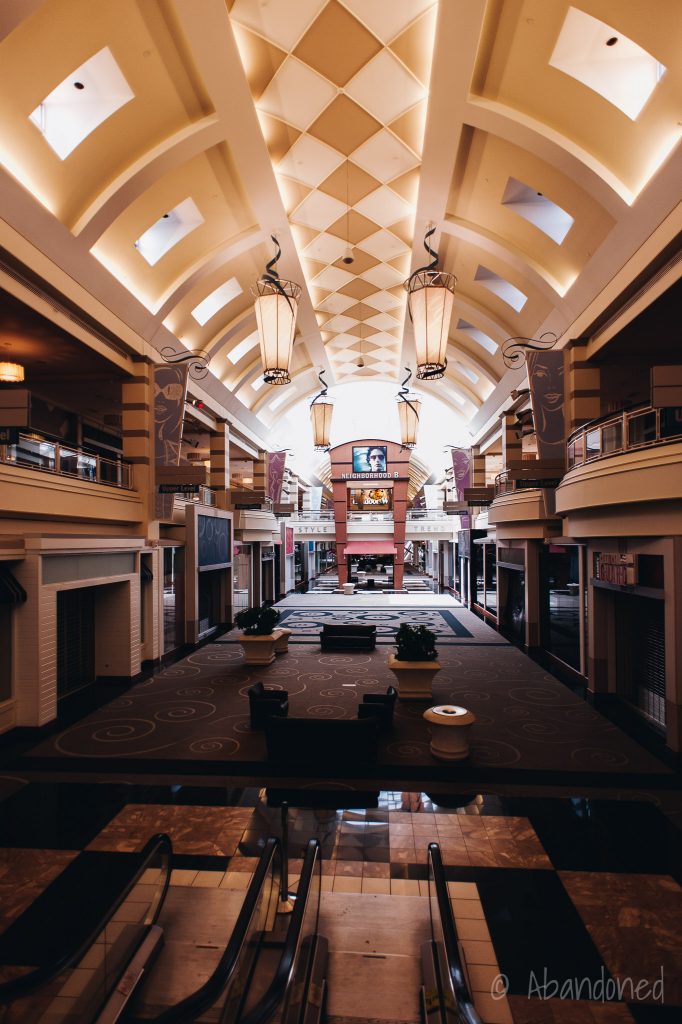 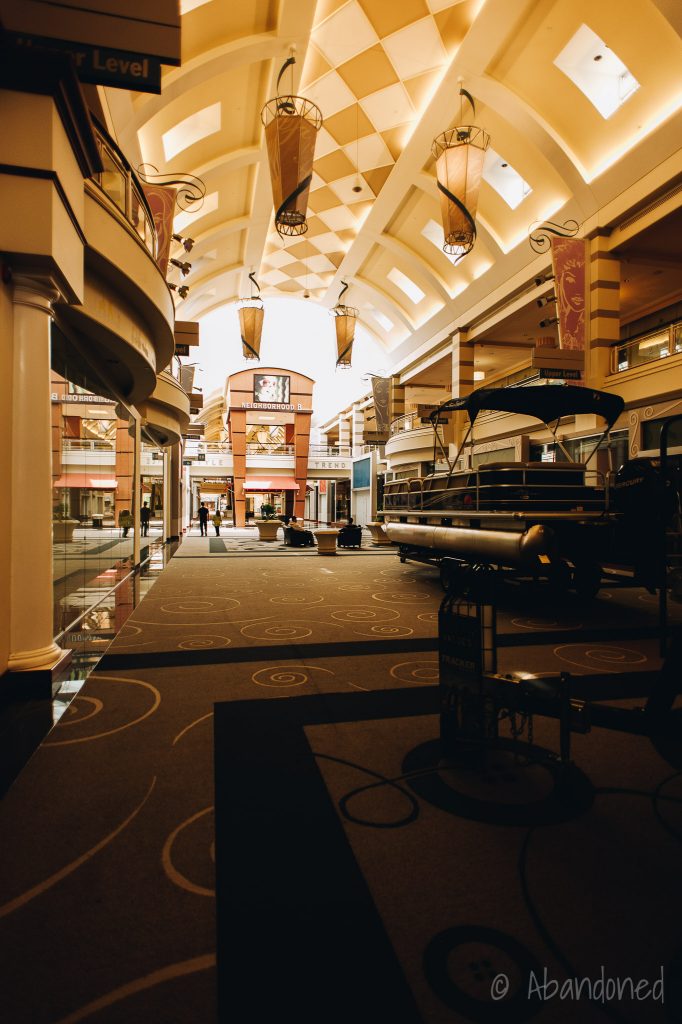 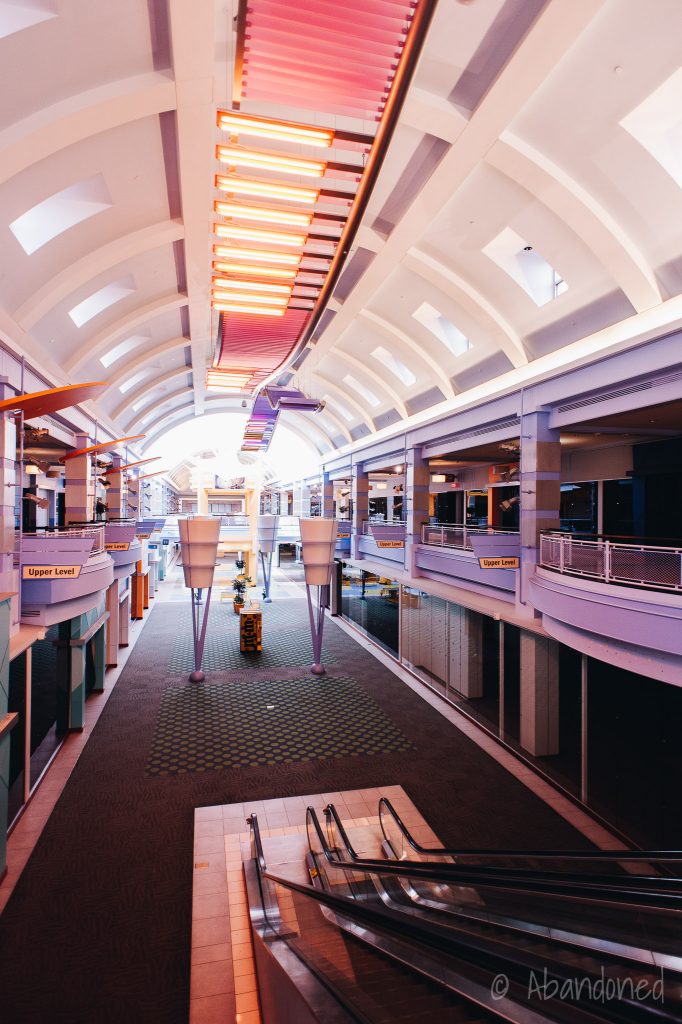 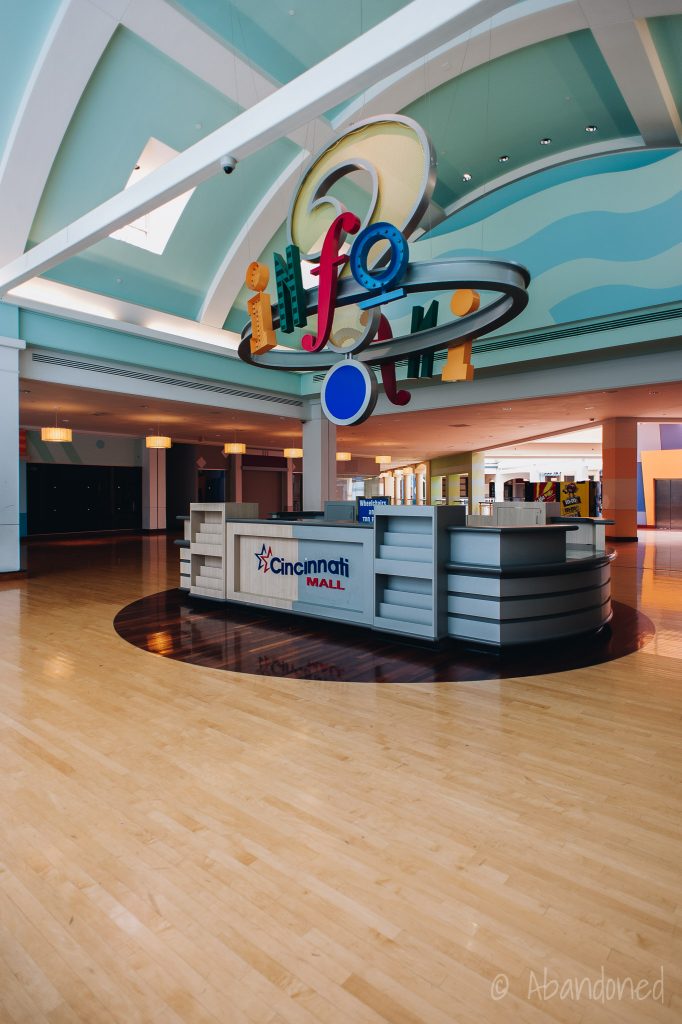 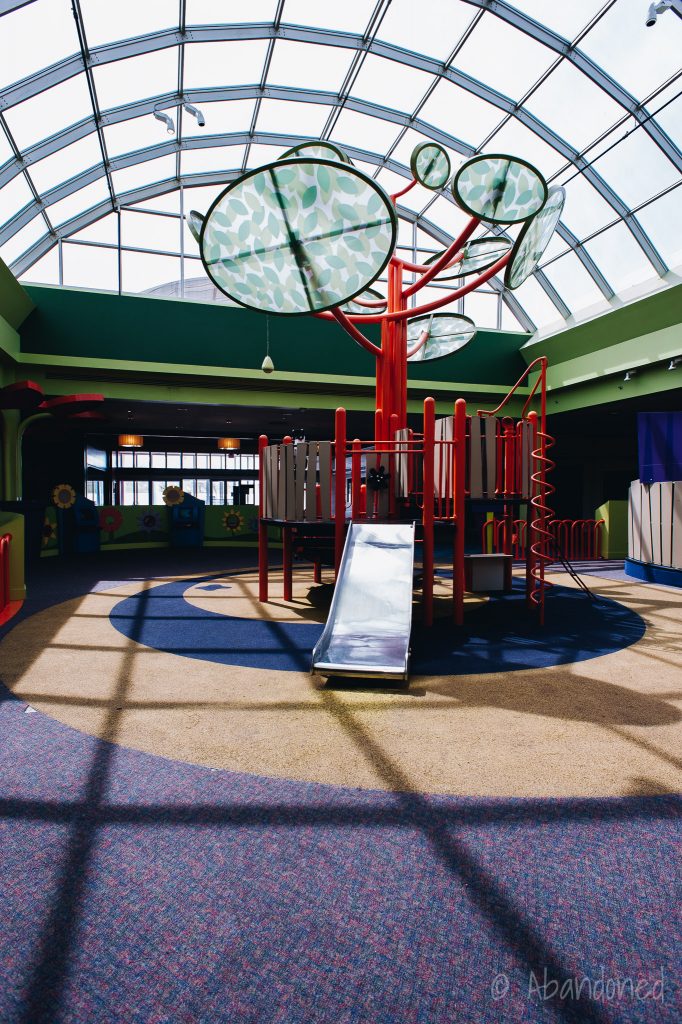 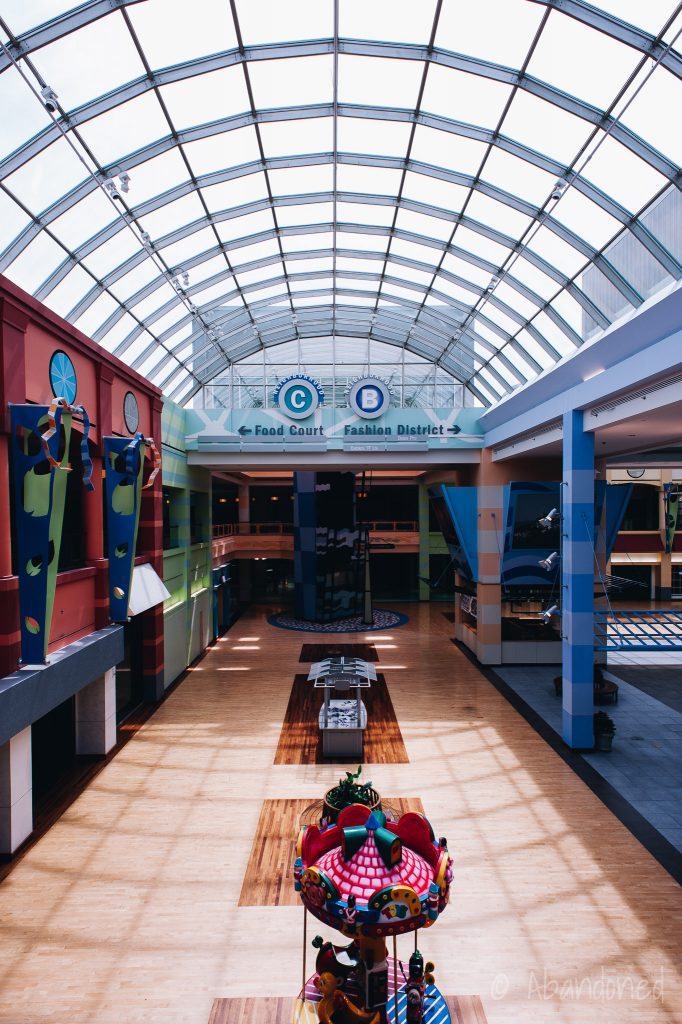 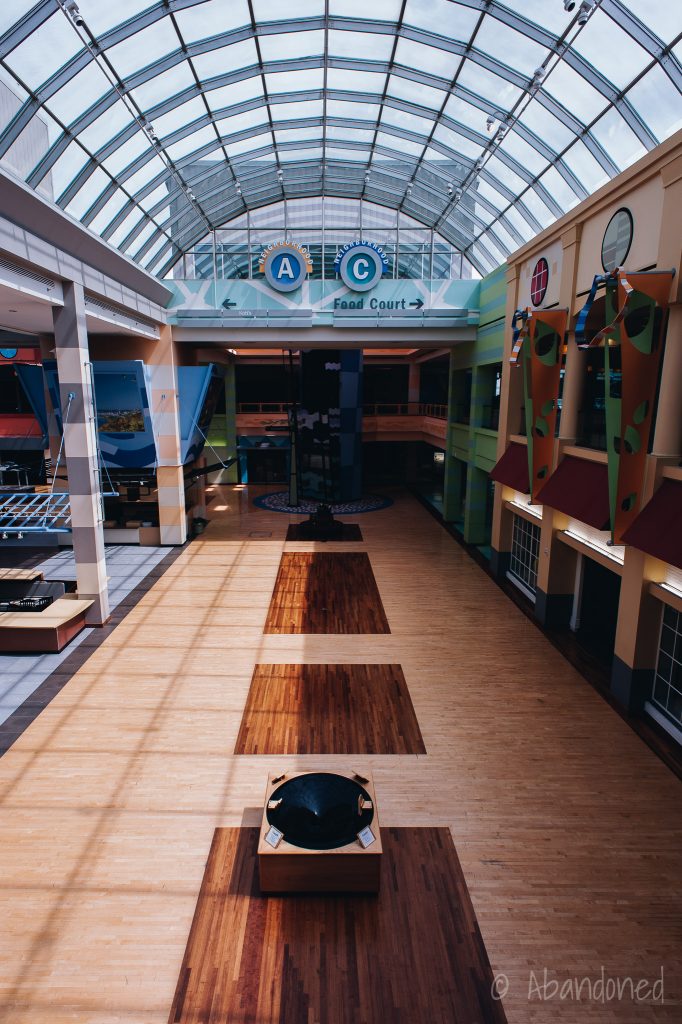 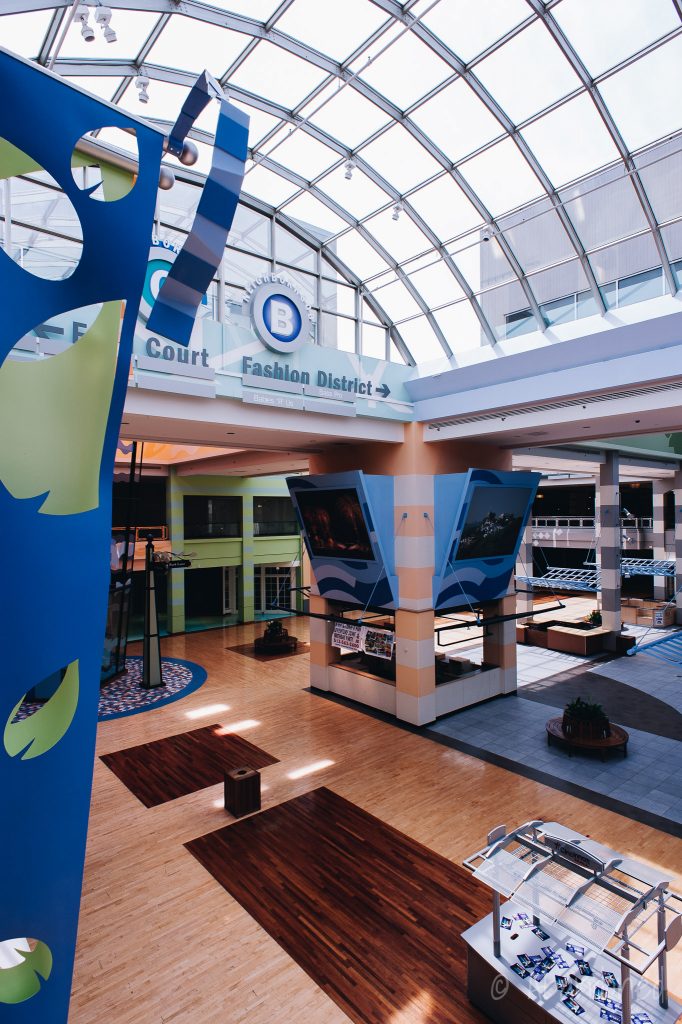 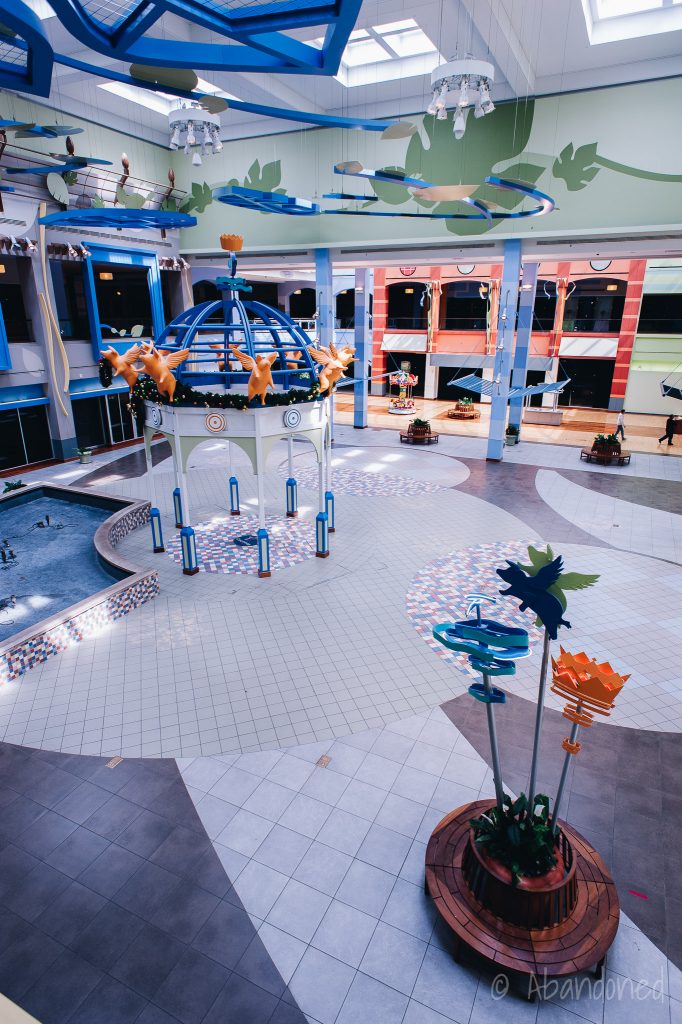 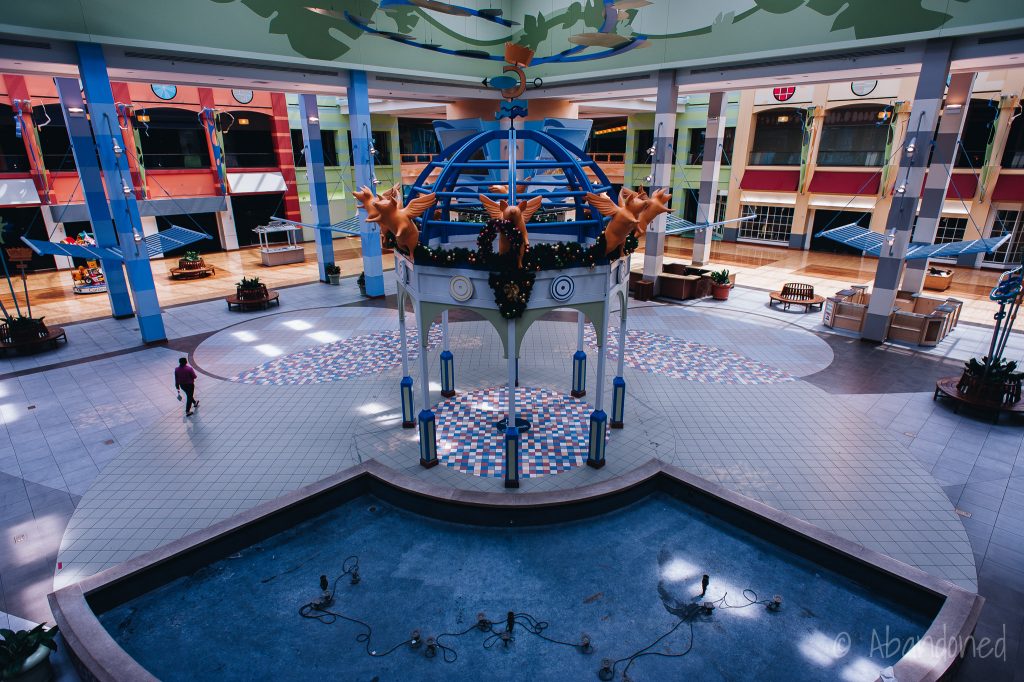 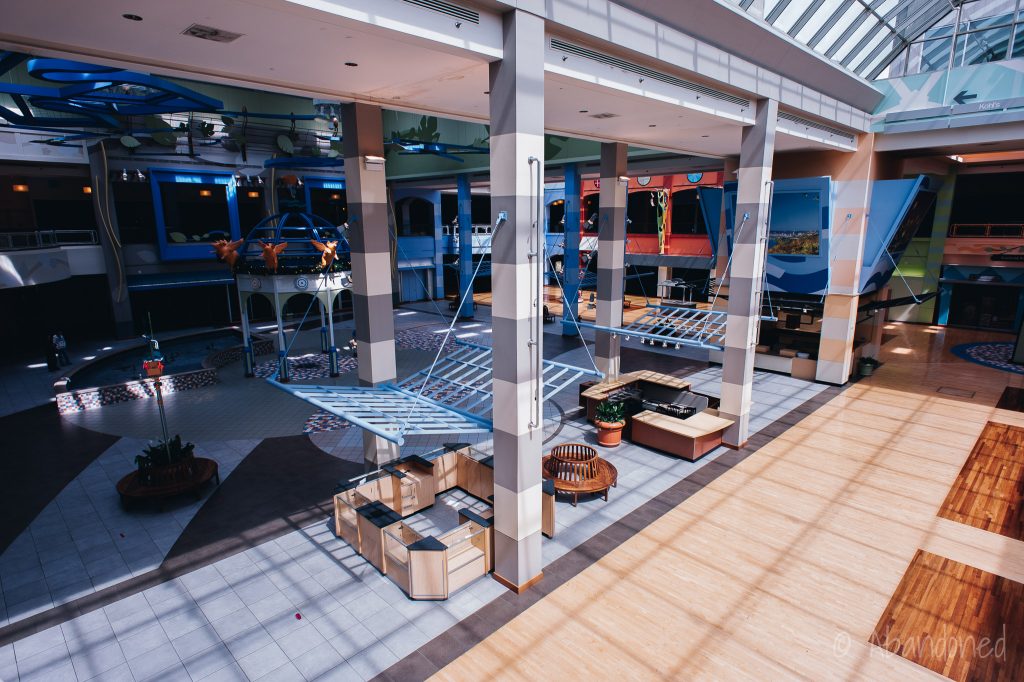 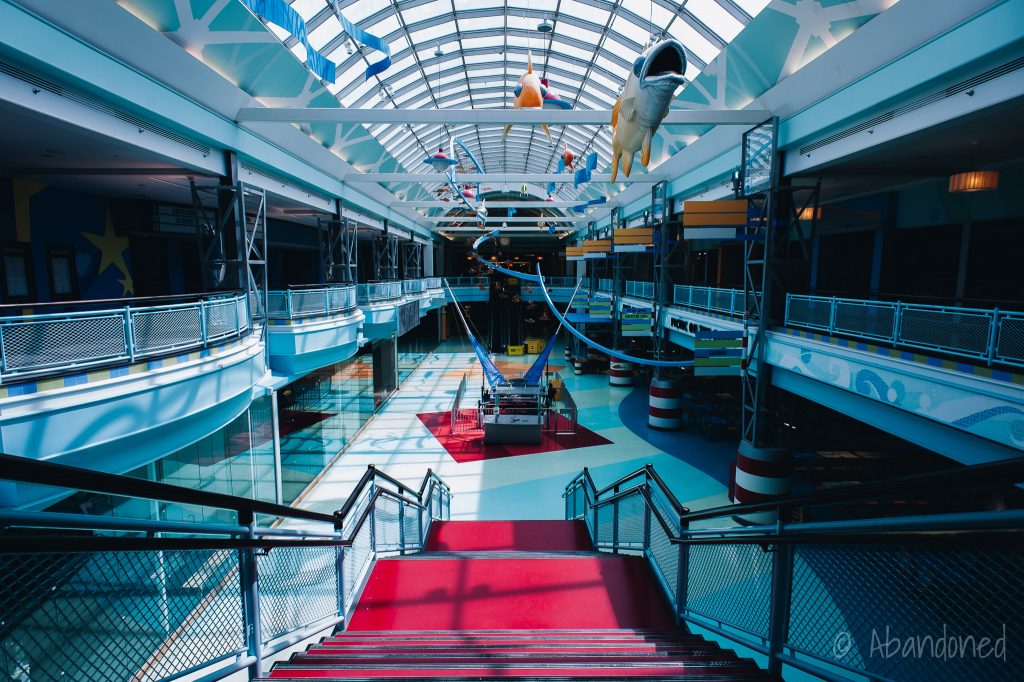 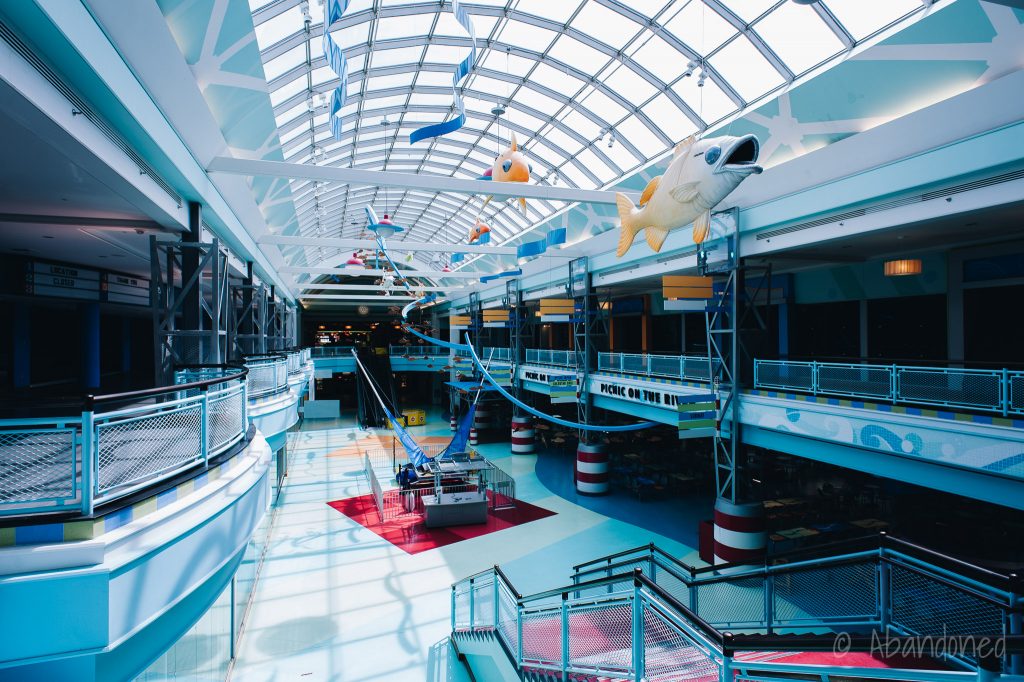