The Marietta & Cincinnati Railroad (M&C) is a defunct railroad that connected Cincinnati, Ohio to Parkersburg, West Virginia. Through acquisitions during the 1800s, the M&C commanded over 270 miles of railroad, from Cincinnati to Marietta and south to Portsmouth and Hillsboro. The line was later absorbed into the Baltimore & Ohio Railroad, becoming its mainline between Cumberland, Maryland, and St. Louis. Significant portions of the route have since been abandoned.

The M&C was chartered on March 8, 1845, as the Belpre and Cincinnati Railroad (B&C) 2 3 to connect Cincinnati to either to Parkersburg, Virginia or Harmer. 3 8 11 The proposed route of the B&C would be via Athens and Chillicothe to a point on the Little Miami Railroad between Plainville in Hamilton County and the mouth of Obanon Creek in Clermont County. 11 It would be funded in part by subscriptions by the communities it would pass through. 8

It was not long before the B&C proposed to rename the railroad the Marietta & Cincinnati Railroad by legislative enactment, in an amendment to the charter of the Franklin & Ohio River Railroad Company (F&OR), which was granted on March 12, 1845. 3 11 This amendment authorized the F&OR to construct its railroad from Marietta to a point on the B&C. 11 The F&OR also considered merging its stock with that of the B&C, in which event the F&OR would change its name to the M&C. An amendment to the charter on March 7, 1850, allowed the railroad to “construct its road to any point as to connect with any railroad or other improvement constructed to the Ohio River, on the Easterly side thereof, within the State of Virginia.” Another amendment on February 7, 1851, authorized the extension of the railroad to Cincinnati, with the privilege of connecting with or crossing the Little Miami Railroad.

On March 21, 1851, the B&C’s eastern terminus was moved to Marietta and the name of the railroad was officially renamed to the Marietta & Cincinnati. 8 On the opposite shore, nine miles downstream was Parkersburg, where the Northwestern Virginia Railroad had recently completed a line from Grafton west to the city in 1857. The line had been leased to the Baltimore & Ohio Southwestern Railway (B&O SW) in 1856, which later provided the B&O an important connection to the Midwest to the M&C via a car ferry between Parkersburg and Marietta.

Construction began on the 173-mile M&C between Harmar and the Little Miami Railroad at Loveland in the spring of 1851, which opened on April 9, 1857. 1 8 11 The M&C used trackage rights along the Little Miami to reach Cincinnati. 1 8

Approximately $12 million had been expended to build the line before a financial panic in August when the M&C became insolvent. 11 Litigation ensued and the railroad was placed into receivership. A decree for the sale of the railroad and other mortgaged property was rendered on January 7, 1860, and the sale was conducted on February 25 to the Trustees. The sale was confirmed on May 2, and the railroad was sold to the Trustees who operated the railroad until August 15 when they transferred the road to the reorganized company. The new company was named the Marietta & Cincinnati Railroad Company as Reorganized.

The adoption of share capital, amounting to $36.8 million, was distributed. 11 By this reorganization and sale, about $4.5 million of the stock and debt was erased.

After the M&C reorganized, it was extended southwest for 24 miles, following the banks of the Little Miami River through Madeira, Madisonville, and Norwood before funding dried up. 4 5 In 1861 8/February 1866 11, a connection was made to the Cincinnati, Hamilton & Dayton Railroad (CH&D) along Ludlow Grove at Ivorydale, which allowed the M&C to use the CH&D Baymiller Street depot. In 1865, the Indianapolis, Cincinnati & Lafayette Railroad (IC&L) built a depot on Plum Street in Cincinnati, and the M&C began to use that depot instead, accessing it via trackage rights with the CH&D. The M&C extended for 190.8 miles from Harmar to its western terminus at Plum Street in downtown Cincinnati. 11

The M&C then constructed a 7,100-foot bridge over the Ohio River between Belpre and Parkersburg between July 1869 and January 7, 1871, replacing a car ferry. 8 It was the longest bridge in the world. 18

The Hillsboro & Cincinnati Railroad was incorporated on March 2, 1846. 3 11 Although not much is known about the railroad’s early history, it was acquired by the M&C in 1861. 11 The M&C had purchased 37 miles of track, 16 miles of which were merged into the mainline, with the remaining 21 miles becoming a branch from Blanchester to Hillsboro.

The Ohio & Mississippi Railway (O&M) was built between 1854 and 1857 and provided a connection between Cincinnati and East St. Louis, Illinois. 8 The O&M featured two branches. One extended from North Vernon, Indiana to Jeffersonville, and the other was from Beardstown, Illinois on the Illinois River to Shawneetown on the Ohio River. The O&M was acquired by the B&O SW in 1893.

While the M&C east of Cincinnati was standard-gauge, the O&M was broad-gauge, which required passengers and freight to be moved between the two railroads via horse-drawn carriages and wagons in Cincinnati. 8 It was not until 1871 that the O&M was converted to standard gauge.

The nine-mile Union Railroad was chartered on September 13, 1858, for a railroad between Scott’s Landing in Washington County to a junction with the M&C at Belpre. 11 Work began immediately after and was open to traffic in 1860. The Union Railroad was then acquired by the M&C for $127,000.

The 70-mile Columbus & Cincinnati Midland Railroad (C&CM) was finished in 1885 between Columbus and Midland City where it interchanged with the M&C. 8 The C&CM was acquired by the B&O SW in 1890, thus providing a through route for the B&O between Pittsburgh and Cincinnati via Wheeling and Columbus.

The Scioto & Hocking Valley Railroad (S&HV) was chartered on February 20, 1849, with the goal of constructing a railroad from Portsmouth to Newark in Licking County. 11 The S&HV was planned to follow along with the east side of the Scioto River from Portsmouth north to Circleville, east to Lancaster, and north to Newark. The route was later revised to connect Portsmouth to Jackson, Hamden, McArthur, Logan, Somerset, and Newark because of the development of the Jackson Coalfield in the southeastern part of the state.

Construction began on the 44-mile segment between Portsmouth and Jackson in January 1851, 15 with construction commencing on the 91-mile segment from Jackson to Newark in February 1853. 11 The first 35 miles were opened to Oak Hill on June 2, 1853, with the arrival of The Bloomfield. 15 An additional nine miles to Jackson was finished in August at the cost of $796,788. 11 15 The completion of the initial line was heralded by the organizers of the Jefferson Furnace who had promoted this line over the Detroit, Toledo & Ironton Railroad (DT&I). The S&HV then opened between Jackson and the M&C at Hamden Junction, a distance of 12 miles, in December 1855. 11

The Quakertown No. 2 mine in Petrea in Jackson County was the first coal mine to be serviced by the M&C after the end of the Civil War. 13 About ¼-mile west of Petrea was a small coal loading dock, where coal was brought to the dock via a mule-powered ½-mile narrow-gauge rail tram to a small slope mine. 13 This was replaced with a spur built by the M&C in 1866.

Due to financial difficulties, the S&HV’s condition had deteriorated to the point that no work further north of Hamden Junction occurred. 11 14 North of the M&C, 42 miles had been graded and 37 miles cleared of vegetation.

The S&HV was placed into receivership between March 1858 and 1863 when it was sold to several Providence, Rhode Island capitalists for $411,000. 14 The S&HV was reorganized as the Portsmouth & Newark Railroad on January 20, 1864, 15 and then sold in May under a decree in the Perry County Court of Commons Pleas to the M&C. 11 The S&HV, from Hamden Junction south to Portsmouth became the M&C Portsmouth Branch.

After the acquisition of the S&HV, the M&C boasted 276 miles of track, 80 passenger and freight depots, 10 engine houses and shops, and 20 water stations. 11 Primary train depots were located at Cincinnati, Loveland, Chillicothe, Marietta, Hillsboro, and Portsmouth. A roundhouse was added in Wellston in the early 1880s. 12

Owing to heavier carloads, the Ohio River crossing between Belpre and Parkersburg required structural enhancements, beginning with the replacement of the approach spans between 1898 and 1900 and the rebuilding of the main channel spans between 1904 and 1905. 18 The original piers were retained, but the steel structures atop the piers were rebuilt between 1914 and 1917.

The Jackson Coalfield began to decline after 1925, which corresponded to a steady decline in railroad traffic for the B&O. The Wellston roundhouse and yard were discontinued on January 18, 1961. 12 In 1972, one channel span on the Ohio River crossing had to replaced after a barge transporting an empty gasoline tanker exploded under the bridge. 18

The Chesapeake & Ohio Railroad (C&O) took financial control of the B&O in 1963. 16 In 1973, the C&O, B&O, and the Western Maryland Railway (WM) were brought together under one identity, the Chessie System. The WM was formally merged into the B&O in 1976. In 1980, the Chessie and the Seaboard Coast Line, which controlled the Louisville & Nashville, the Clinchfield, and Georgia railroads, merged to form the CSX Corporation. Despite the consolidation, CSX never had its own identity until 1986, when all of the merged entities was renamed CSX Transportation (CSX). In April 1987, the B&O was formally absorbed into the C&O, which merged into CSX in August.

Chessie announced in 1985 that the mainline between Cumberland, Maryland, and Cincinnati would be downgraded from mainline status. 17 The last through train moved between Greenfield and Parkersburg shortly after, and through traffic was routed north to Willard or south through Huntington, West Virginia. 10 In 1988, track removal began between Greenfield and Athens and Parkersburg and Clarksburg. The line remained intact from Athens east to Parkersburg for a rumored unit coal train, but the traffic never materialized and the former mainline between Athens and Parkersburg was dismantled in November 1991. 10

The remaining segments west of Midland to Cincinnati eventually became part the CSX Midland Subdivision, while the former mainline from Midland east to Greenfield, a distance of 29½-miles, was retained by the city of Greenfield to service several industries. 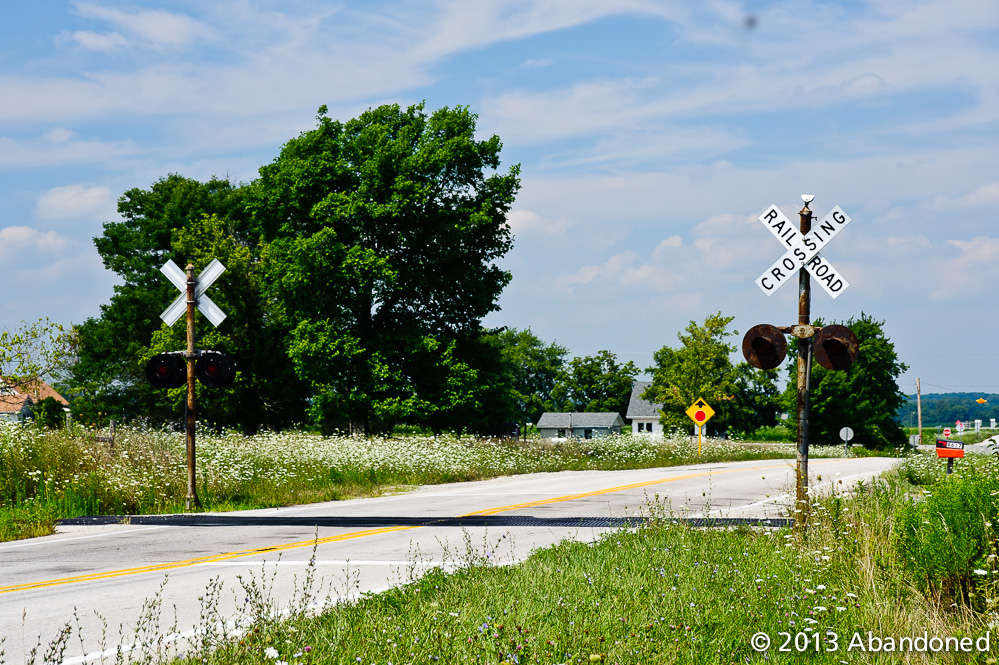 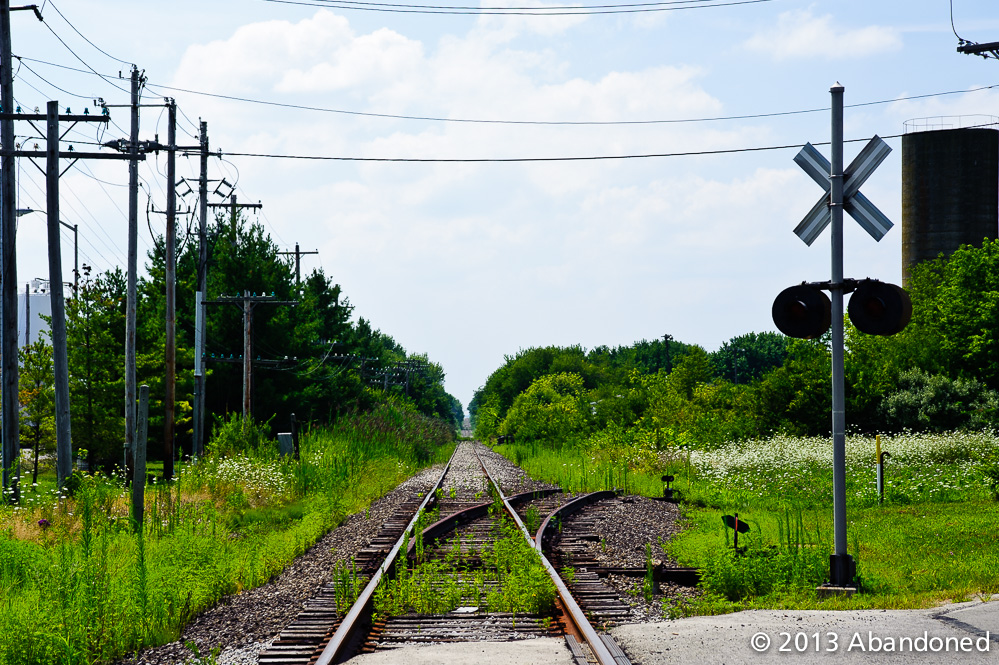 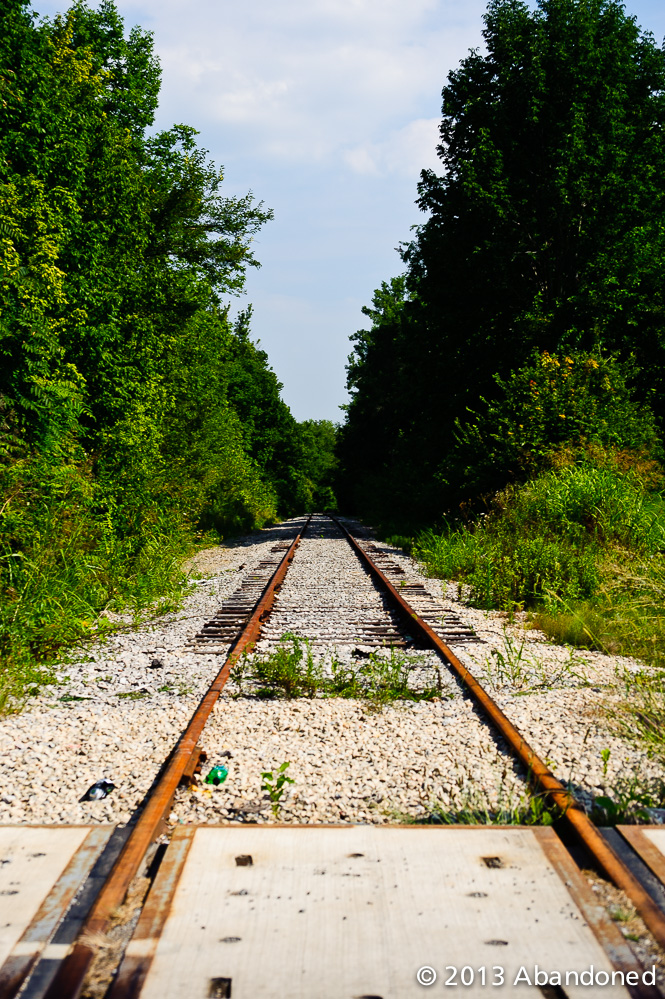 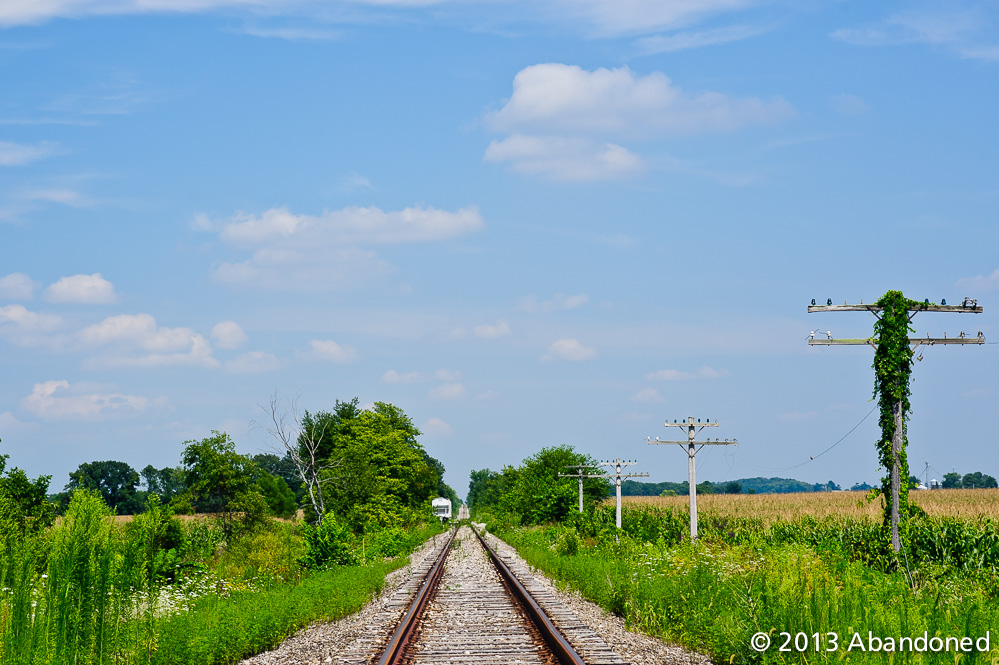 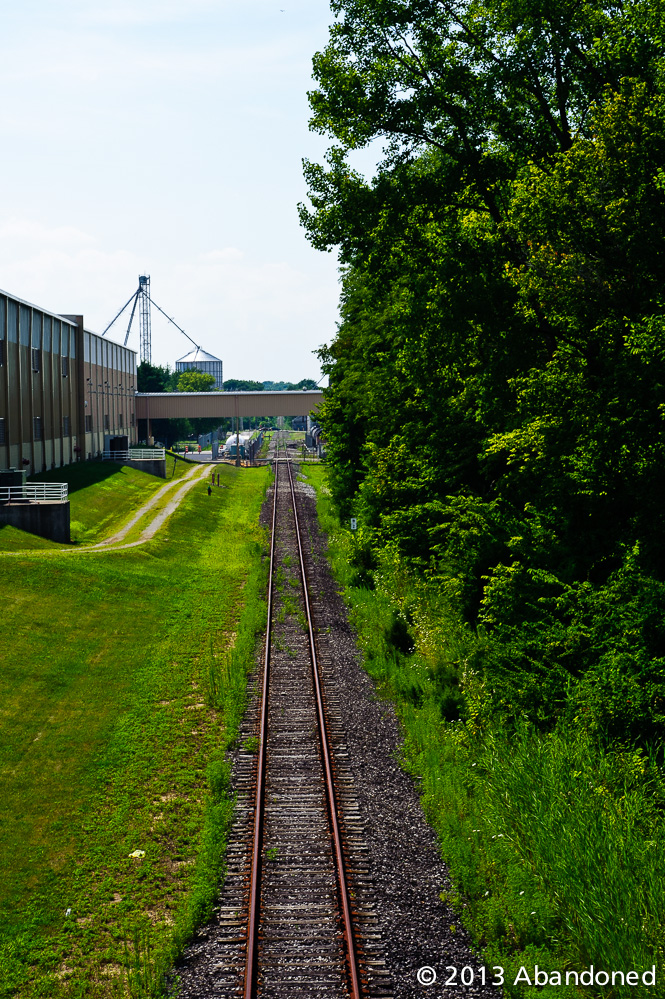 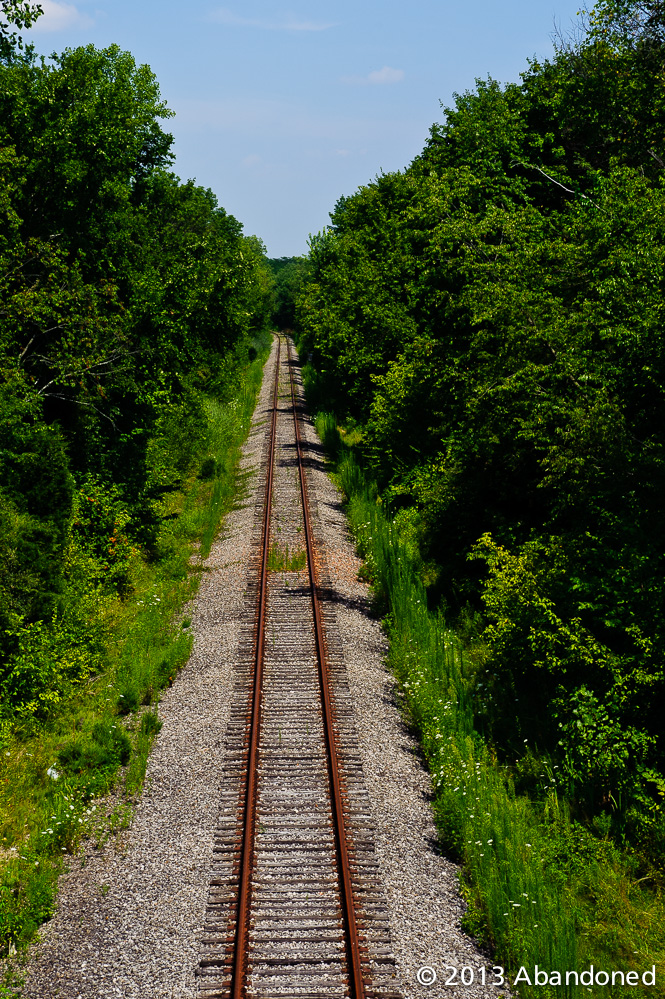 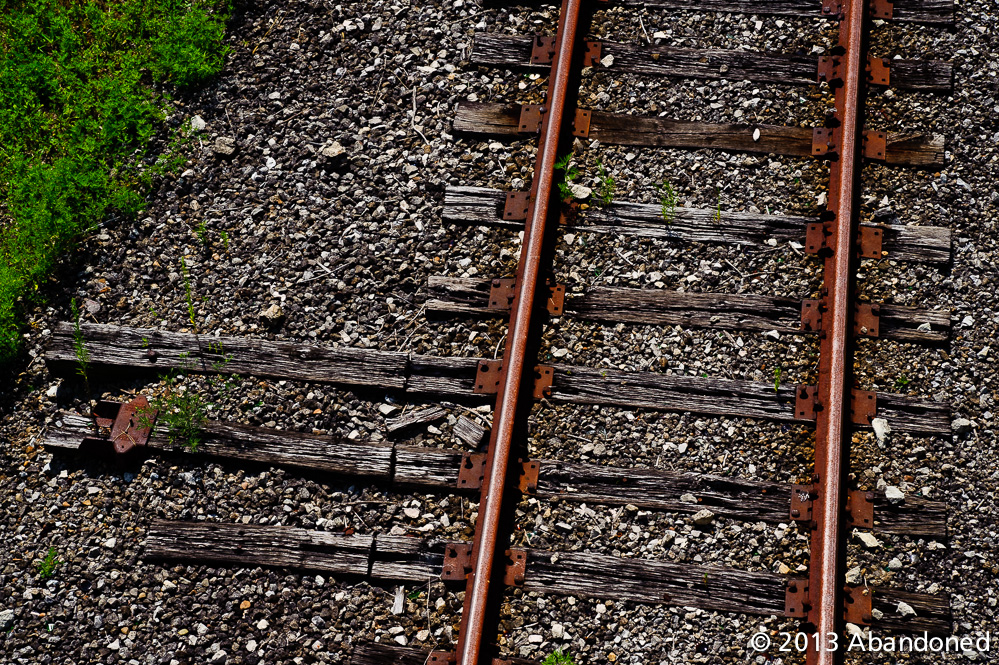 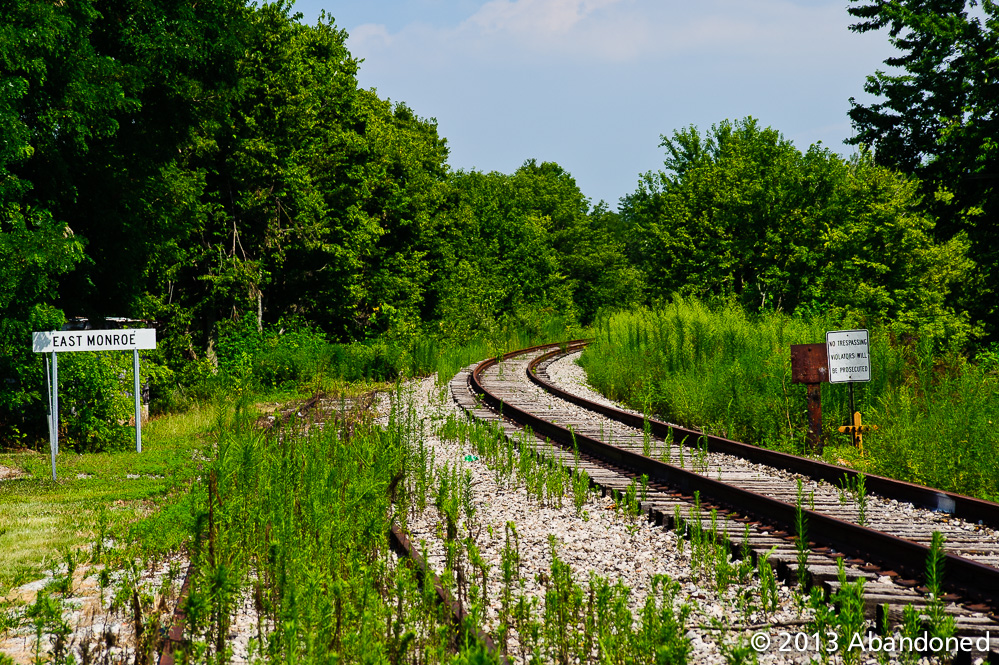 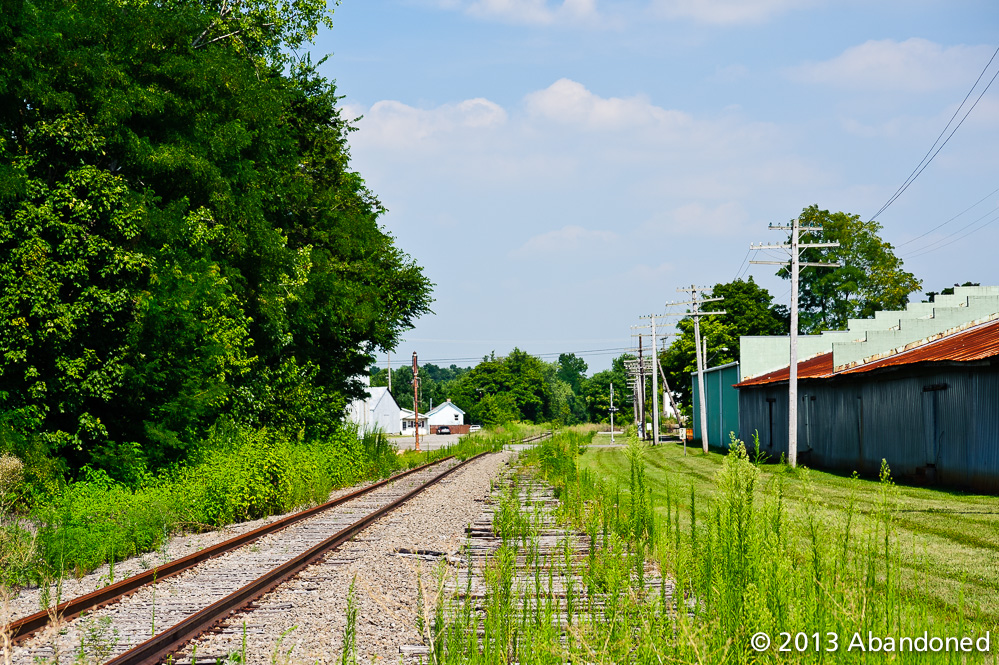 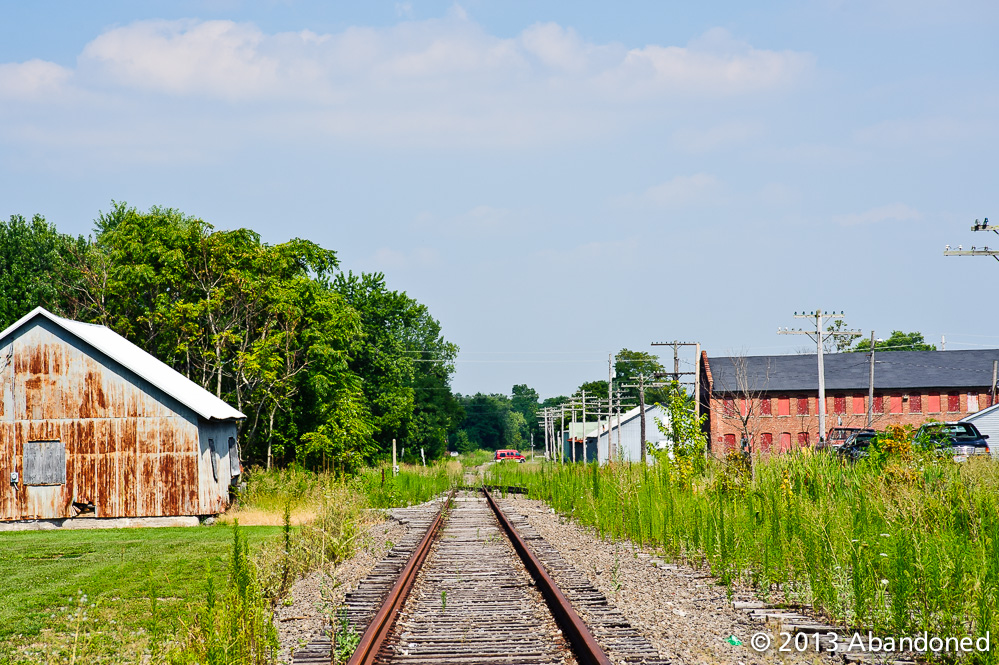 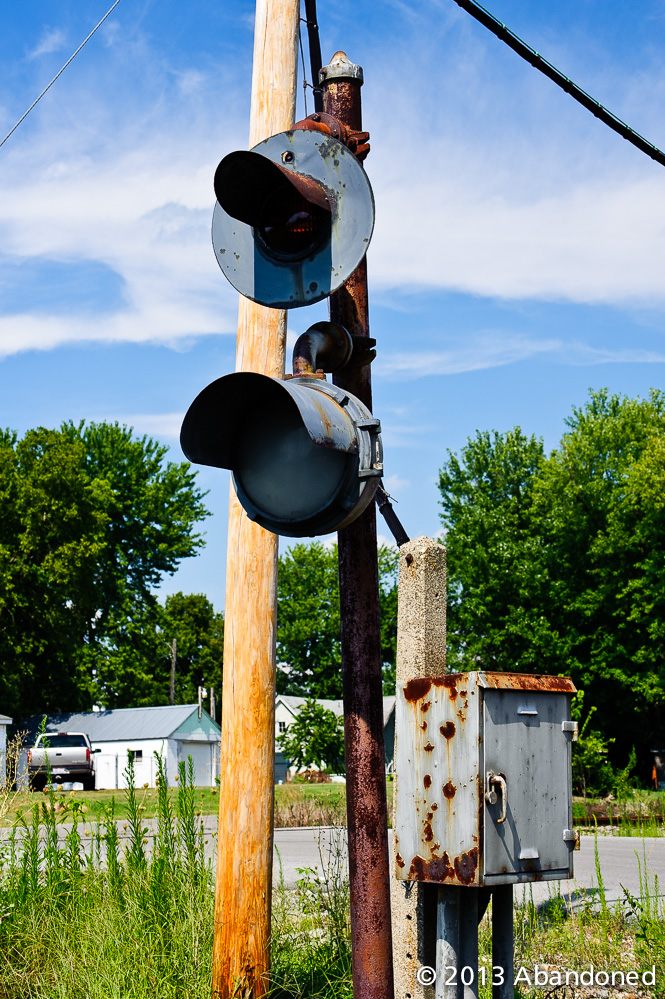 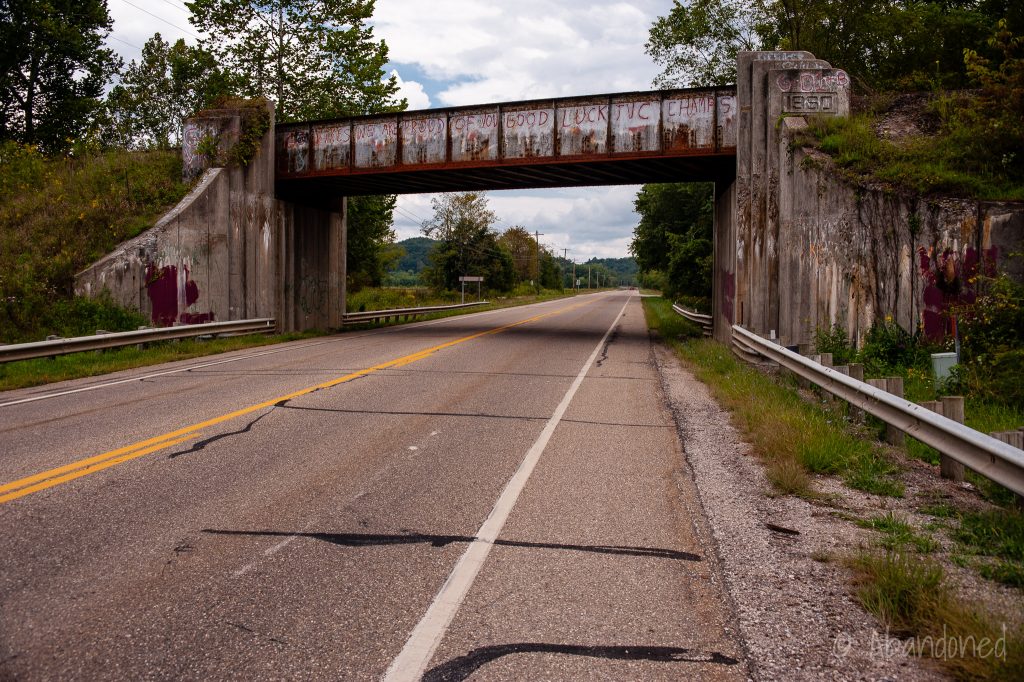 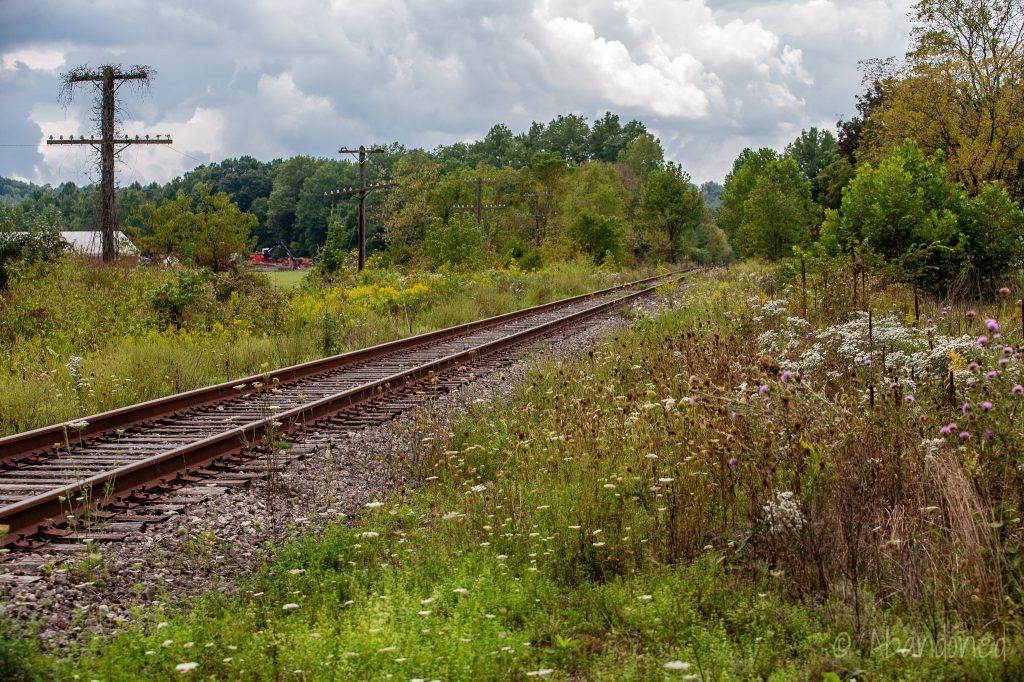 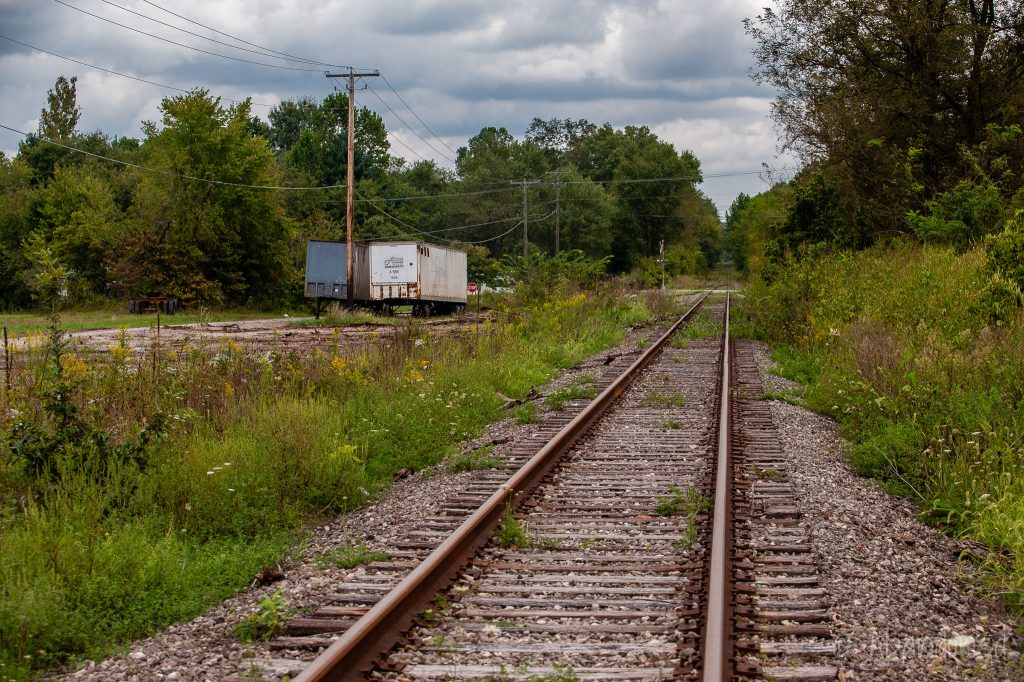 Beautiful, warm weather, coupled with explorations of various historical and abandoned structures, always beats off the winter blues. In my trip to Parker Tobacco Company, I had also stopped at Vernon…
END_OF_DOCUMENT_TOKEN_TO_BE_REPLACED
Category ExplorationsPosted on December 27, 2016August 22, 2019