The immigration of French Canadians to Worcester began as early as the mid-1750s when the Acadians left Nova Scotia. 5 It was not until the mid-1800’s that they started to arrive in the city in large numbers, drawn in part by vast industrial enterprises. By 1852, with 40 French Canadian families in the town, they desired a church where French could be spoken.

The first attempt at forming a French-speaking Catholic church was in 1846 by Father Zepherin Levesque, which was not successful, as was another try in 1852. 5 In 1853, the Societe St. Jean Baptiste was formed, an off-shoot of one in Quebec, which was initially created in 1834 to promote French-Canadian interests in Canada.

The first mass at Notre Dame was celebrated on the second floor of the local Horticultural Hall on September 26, 1869, with 450 in attendance. 5 On June 1, 1870, Primeau acquired an existing church building on Park Street for $22,700, and it was rededicated for Notre Dame.

The newly established Reverend Joseph Brouillet took a census of the French Canadian Catholic population in Worcester and discovered it was near 8,000. 5 He then purchased 22 acres along Webster Street and established the Notre Dame Cemetery. By the turn of the 20th century, Brouillet sought to move the congregation to a more “hygienic” location and purchased the former First Baptist Church on Salem Street in July 1902. It offered more space for the growing parish and more room for parochial classes.

In mid-1925, the pastor informed the congregation that it had received permission to replace the current church due to the high cost of the rehabilitation work that was needed. 5 The parish had planned to acquire another church building but instead hired Donat R. Baribault of Springfield to design a new structure. Baribault opted to design the new church in the Rayonnant Gothic 5 and Romanesque Revival styles. 1 2 4

The foundation for the church was laid in May 1928, and the sanctuary was finished at the cost of $300,000 in 1929. 5 The interior was elegant. Professor Gonippo Raggi of Rome was commissioned to paint the interior in the Roman-Byzantine style. Sixteen stained glass windows, located along the lower sides of the nave, illustrated scenes from the lives of Jesus and Mary. Behind the organ loft, the stained glass windows showed the Assumption of Mary with the Apostles at her feet.

Facing diminishing membership, Notre Dame proposed on March 30, 1967, converting the sanctuary into an Ecumenical Center that could serve various spiritual groups at differing times. 5 The parish and the Bishop of Worcester did not back the idea.

The church was then recommended for demolition in May 1968 as part of Worcester’s urban renewal efforts. 5 The Worcester Redevelopment Authority had proposed the razing of the church for a $5 million, 2,500-seat public theatre and considered taking the church via eminent domain. The city offered two options: lose the rectory and most of the adjoining land, or lose the rectory and church. The parish countered that it should have a new church downtown that included living quarters for their priests.

Ultimately, the Worcester Arts Council, which would have managed the auditorium, was not able to secure financial support for their project. 5 The plan to raze Notre Dame was dropped in July 1969.

In March 1972, the church was renovated, which included repairing mortar joints, installing a new ceramic-like floor, painting the steeple white, re-leading the stained glass windows, and updating the electrical systems. 5 The building was again restored in 1990, in which mortar joints were repaired, anchors were replaced, and the colonnades and column capitals were rebuilt.

In 2007, with regular attendance at near historic lows, the Roman Catholic Diocese of Worcester decided to close the church and merge the parish with two others. 5 Notre Dame celebrated its last mass on July 1, 2008, 5 and the building was closed and deconsecrated. 1 2

Initially, the developers had proposed saving the church for reuse as a hotel, performing arts venue, or residences. 3 7 Three hotel developers rejected Notre Dame for that purpose. For a 350- to 500-seat theatre, it would require $27 million, or more than the cost of redeveloping the 2,300-seat Hanover Theatre. After the developers spent five years and $700,000 on research and outreach, 3 the developers opted to move forward with plans on razing the church in April 2016. 5

A permit for demolition on the Notre Dame Church was issued in August 2018 2 and demolition began on the church on September 17, 2018. 1 The land is set to be repurposed for a four-story building with 84 residential units and retail space. 3 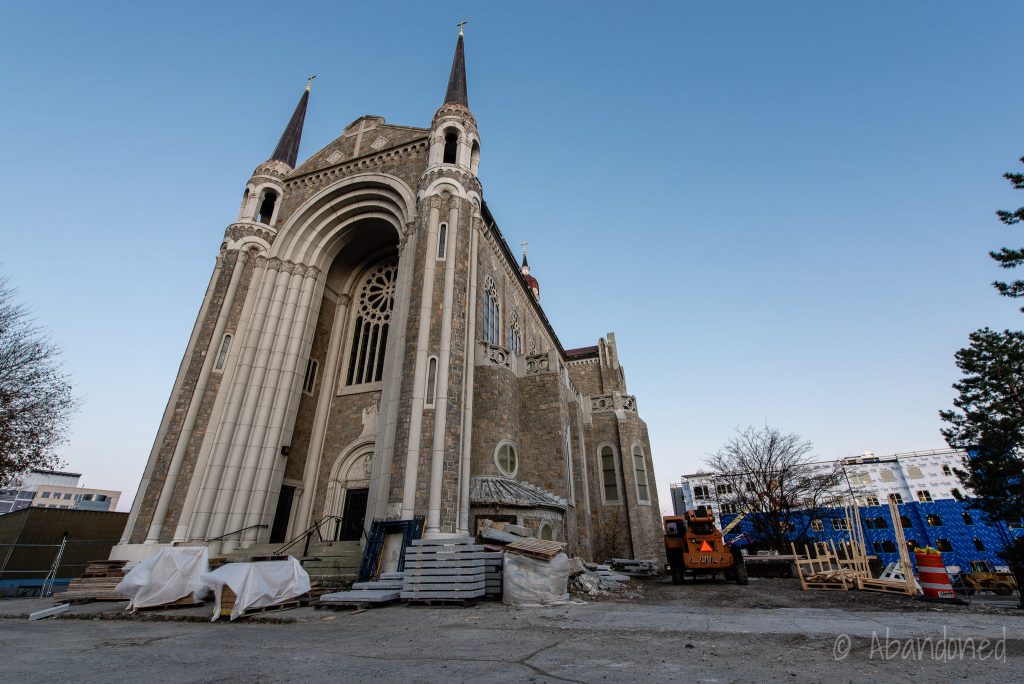 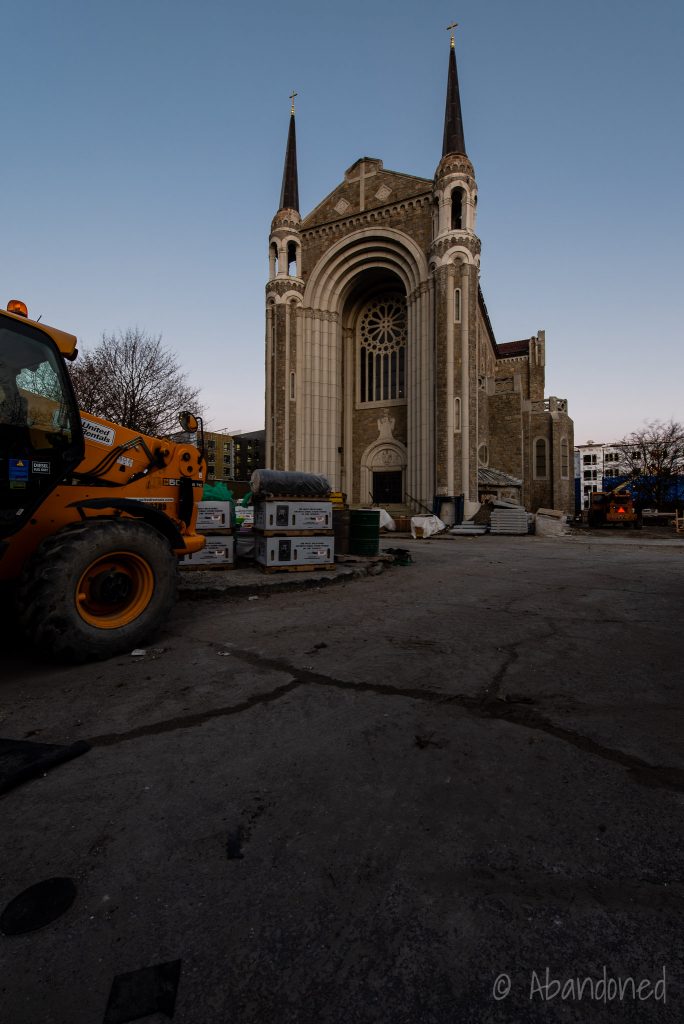 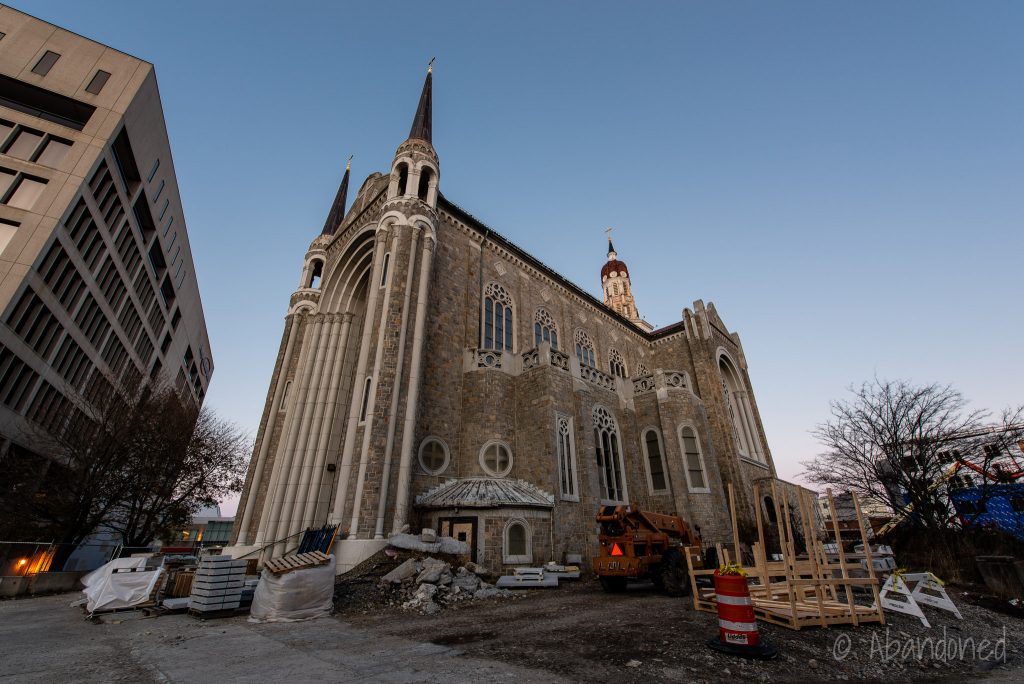 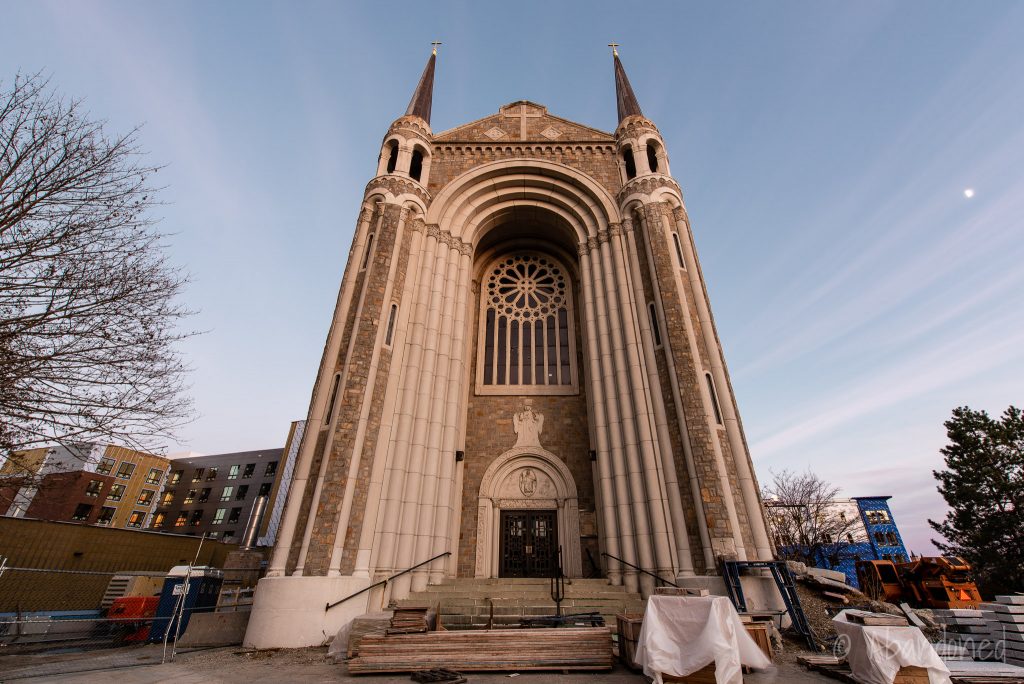 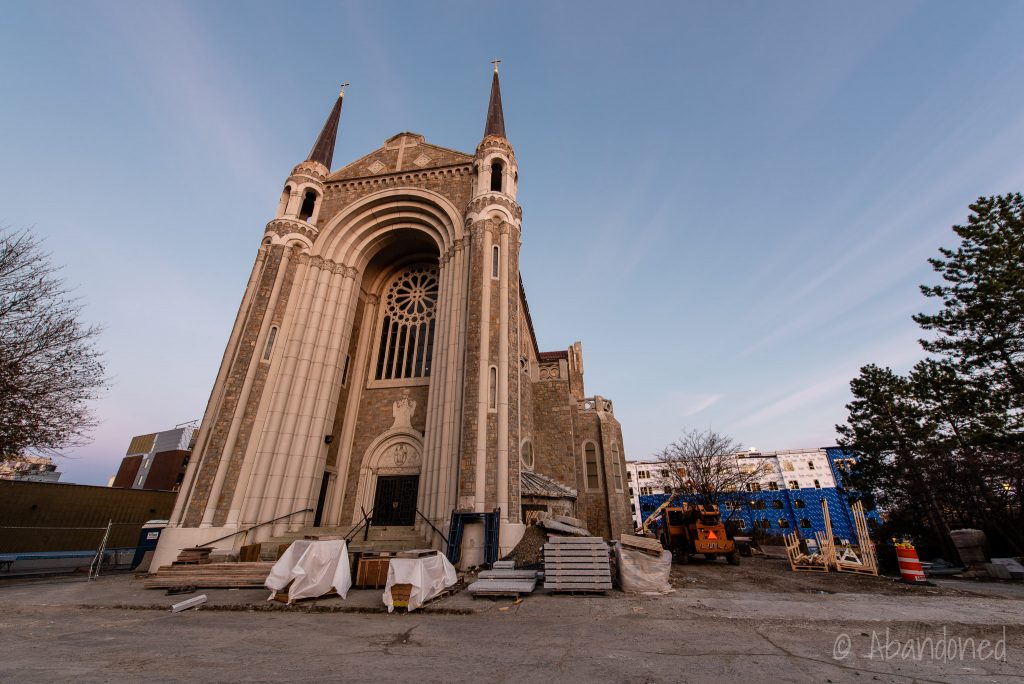 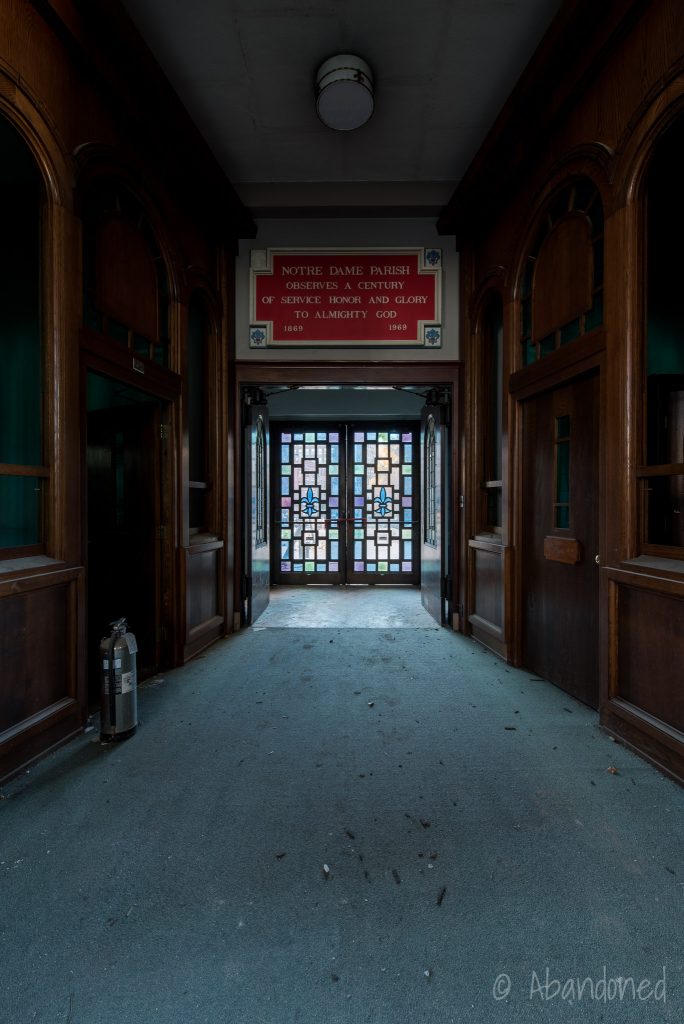 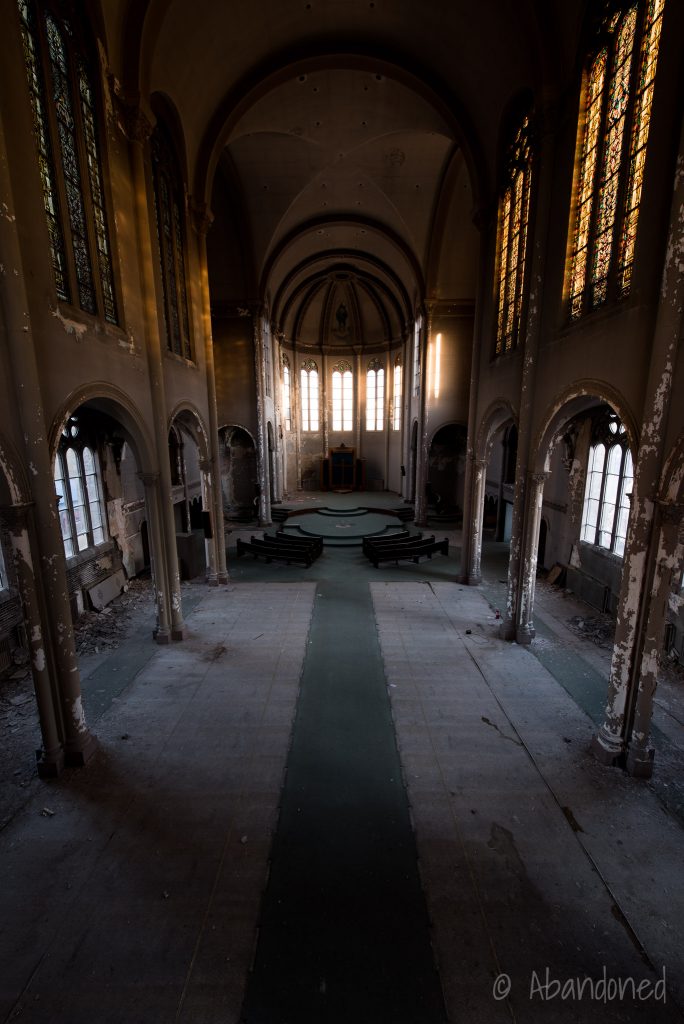 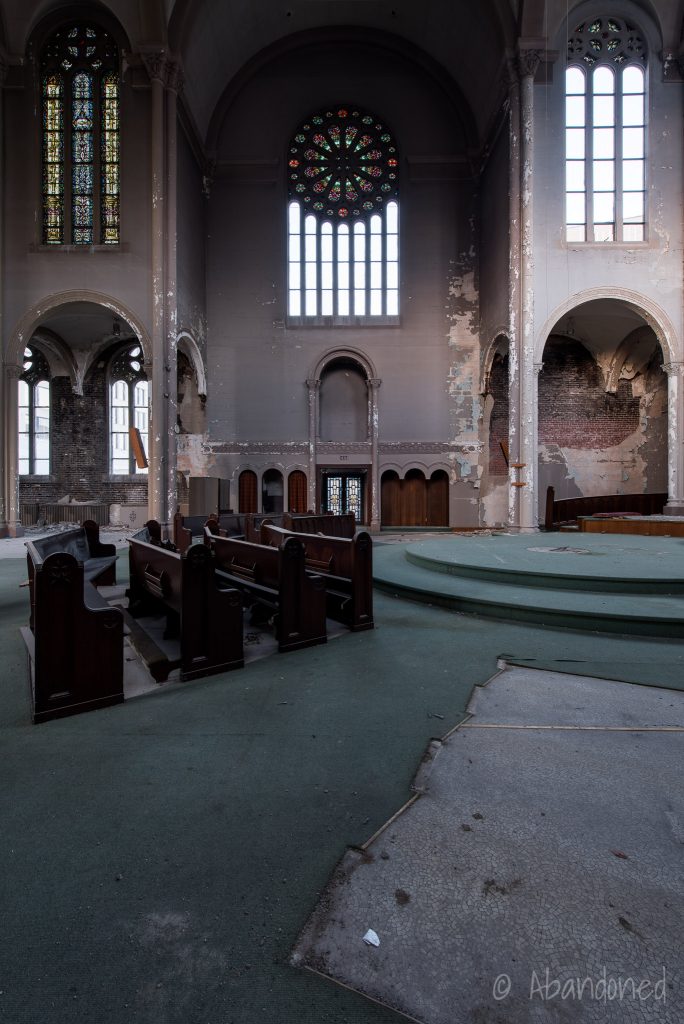 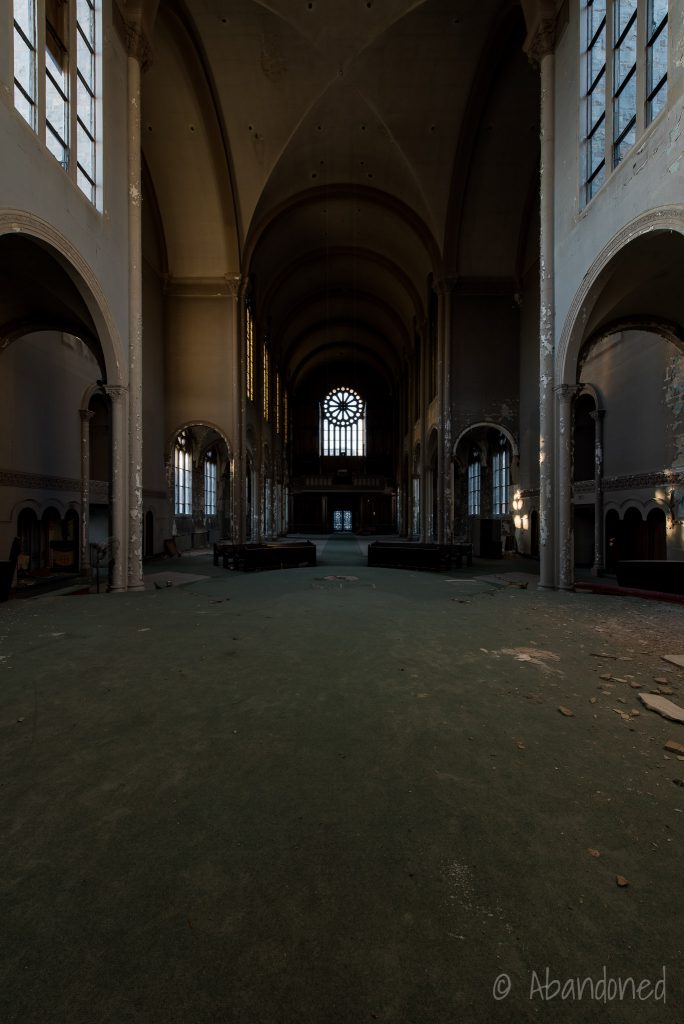 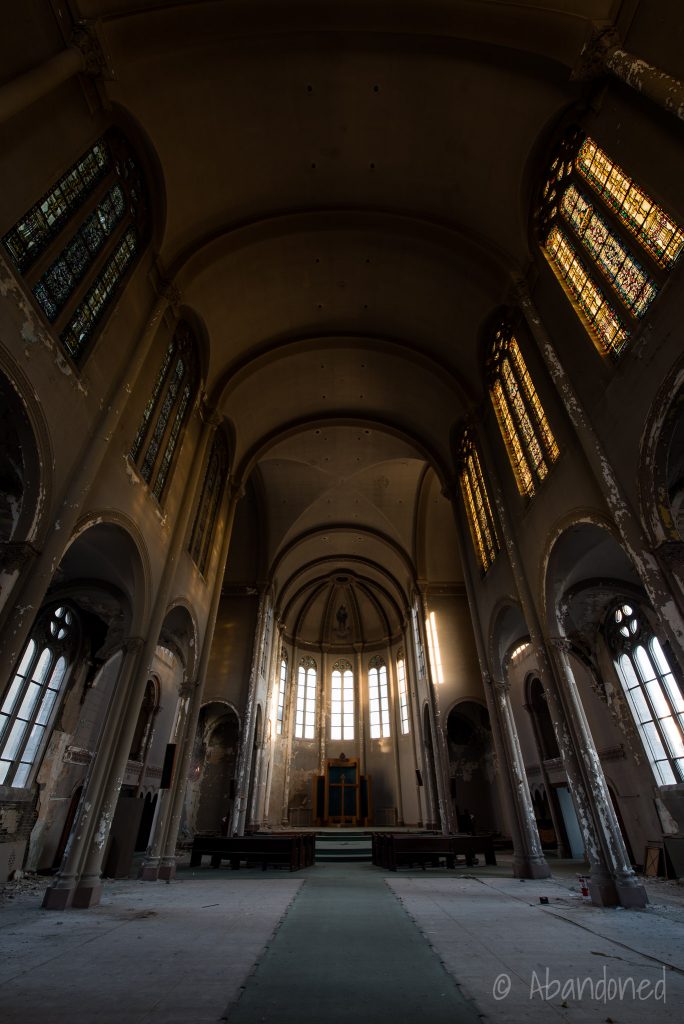 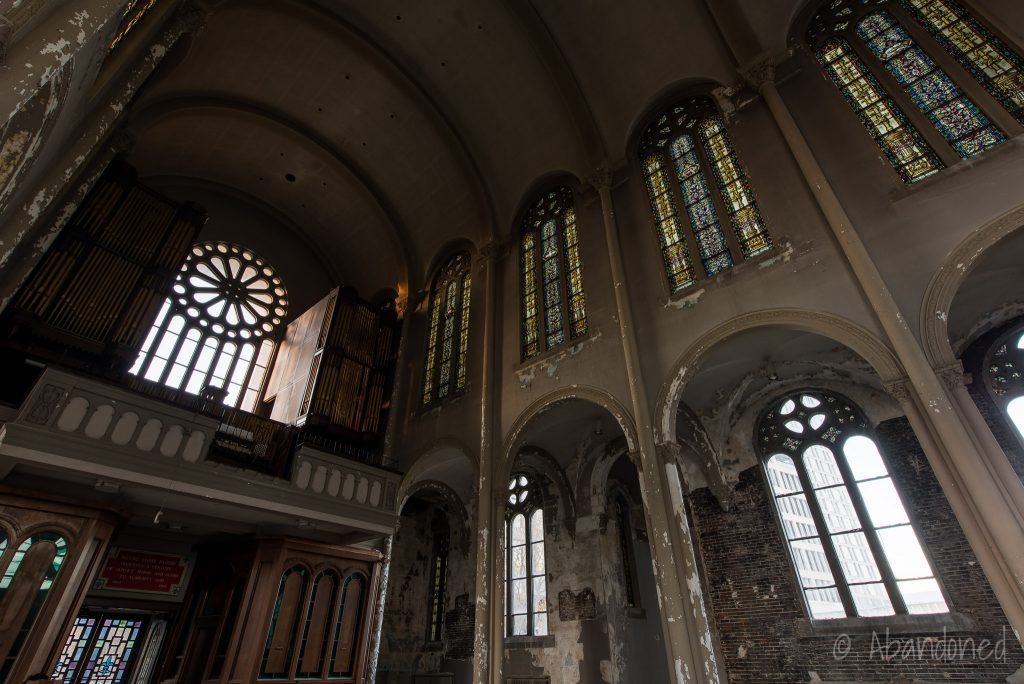 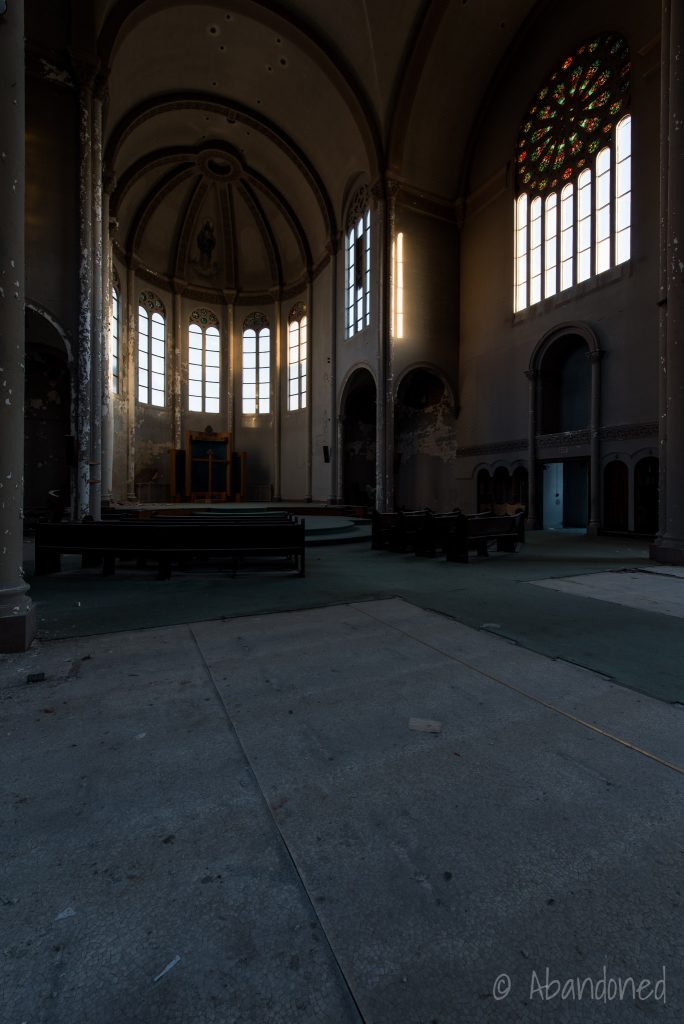 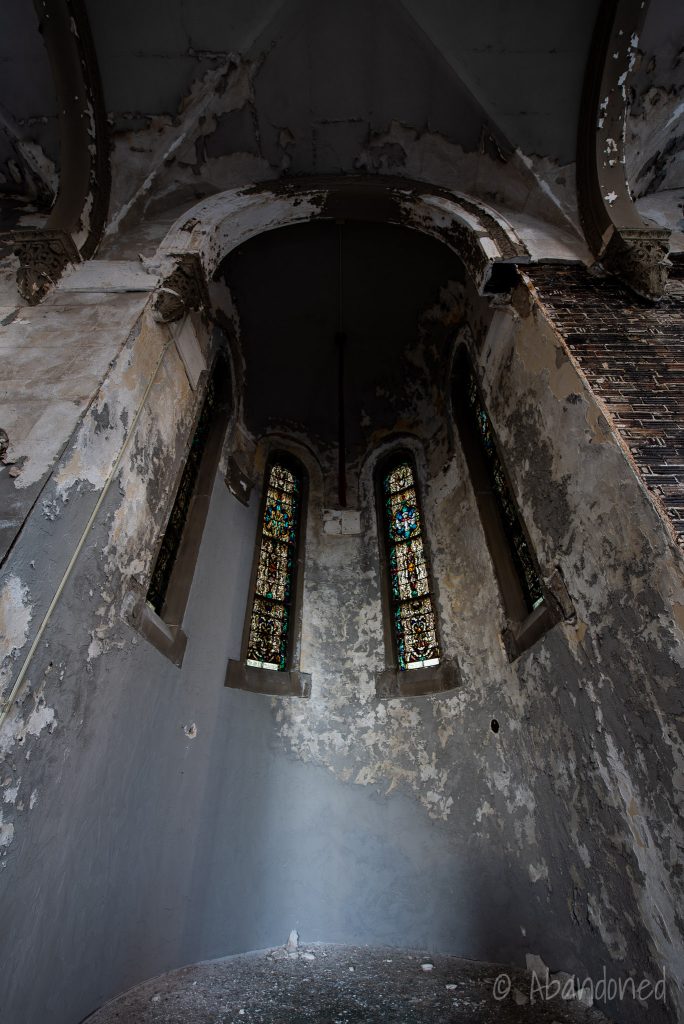 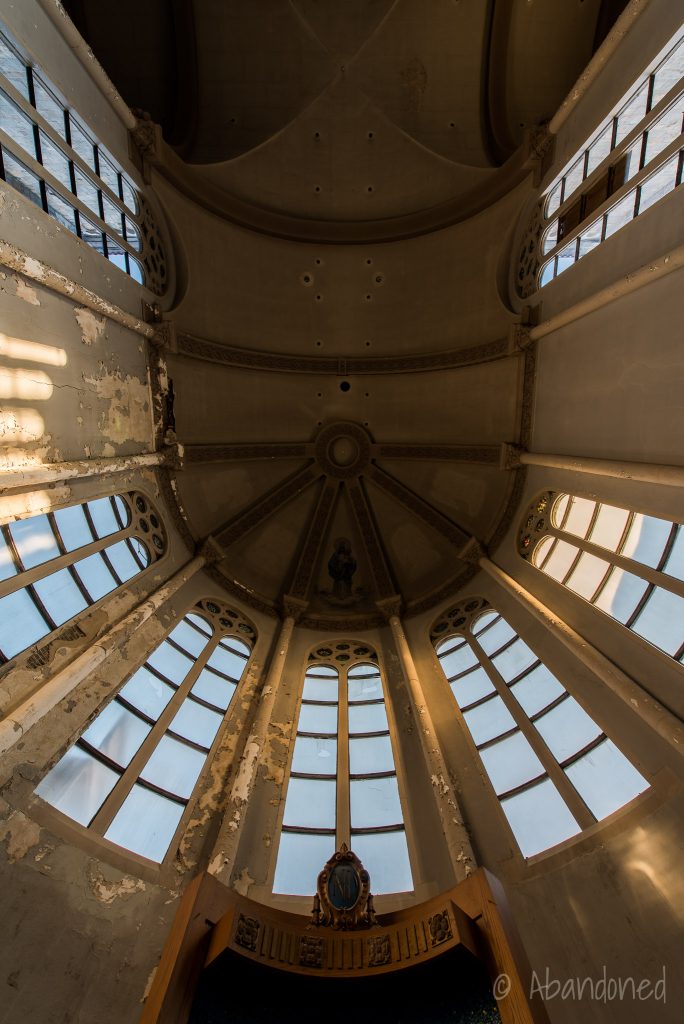 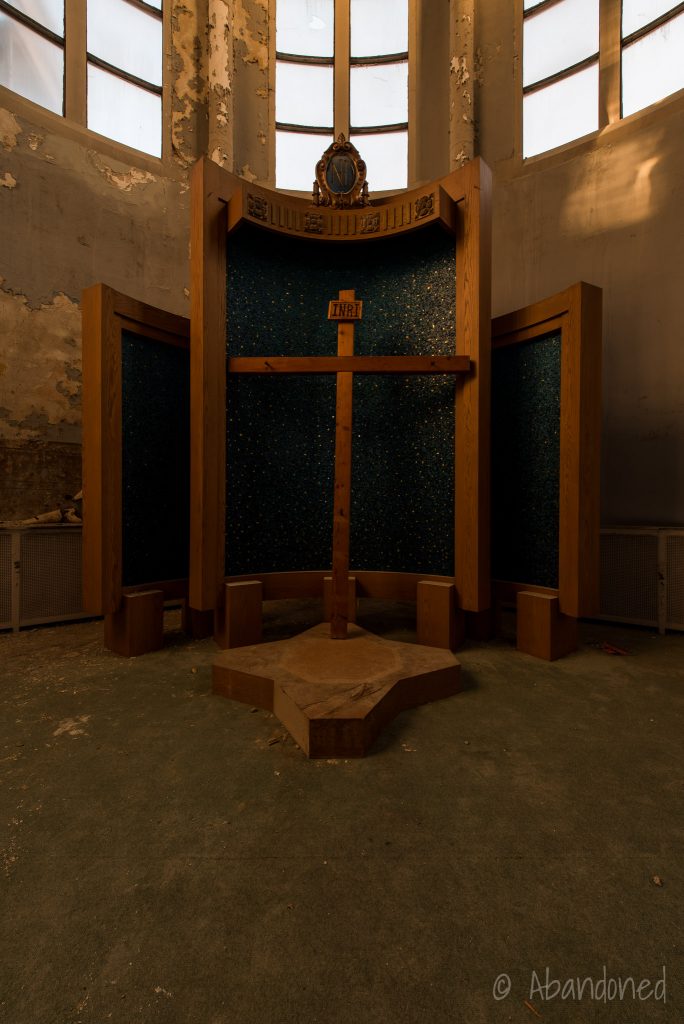 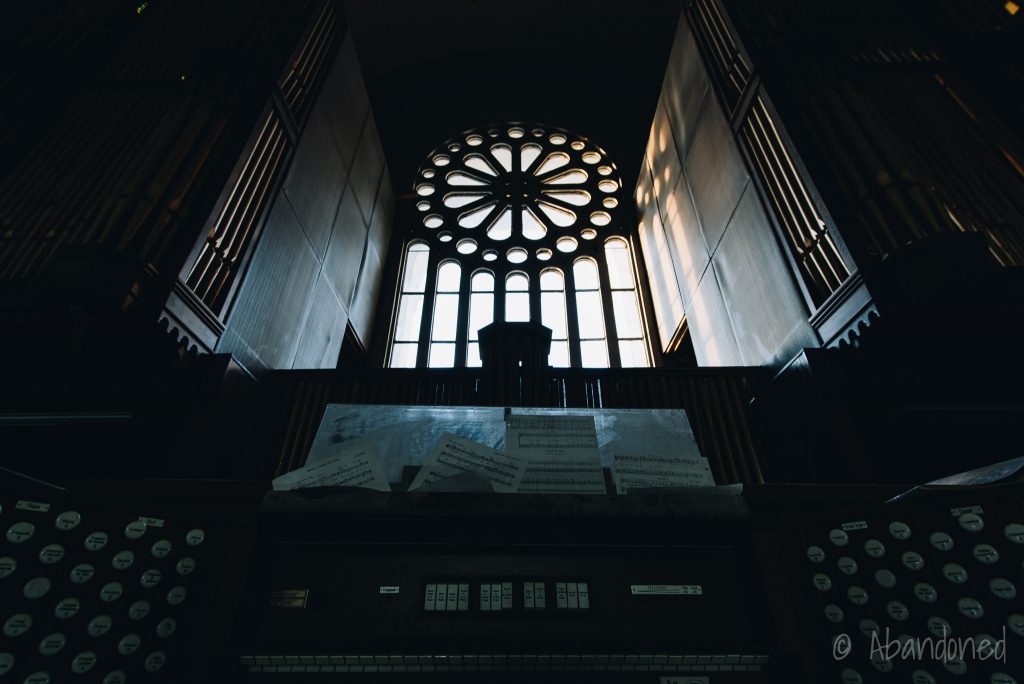 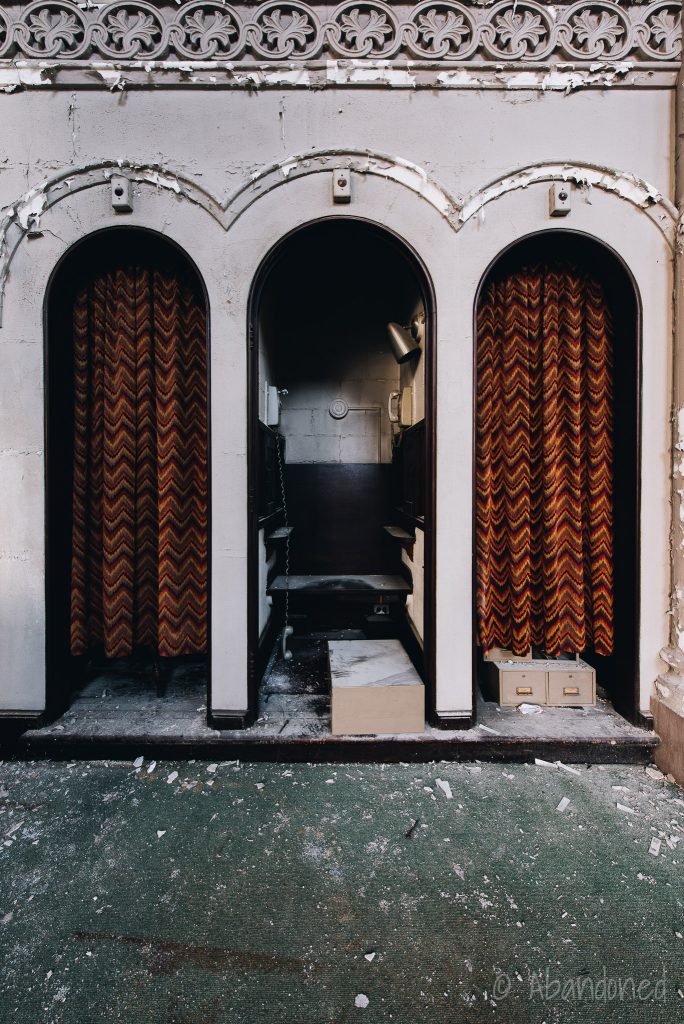 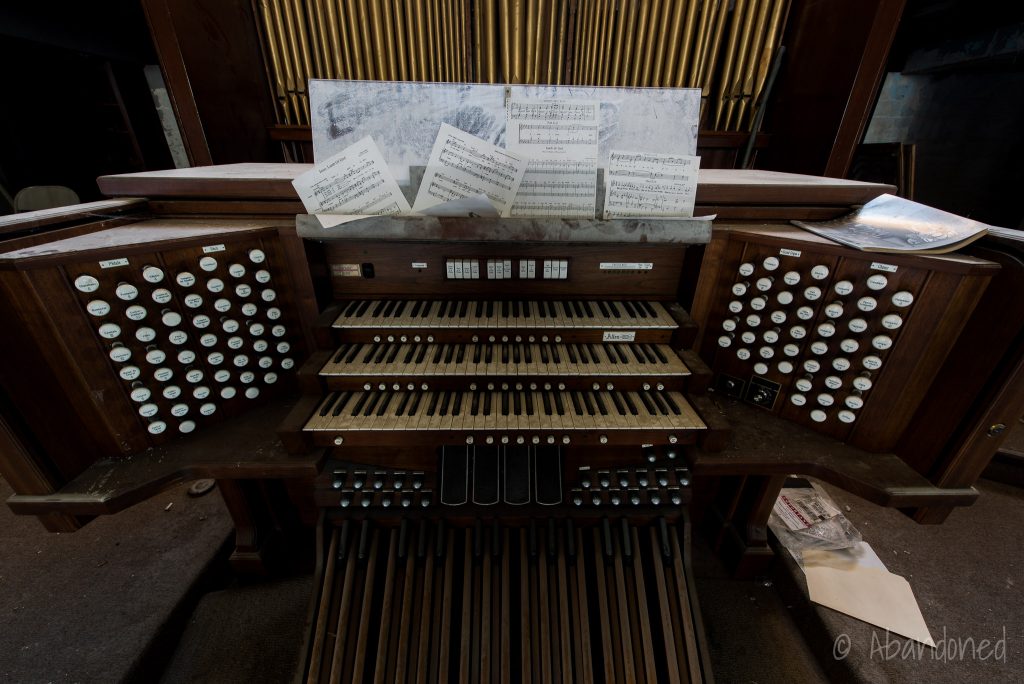 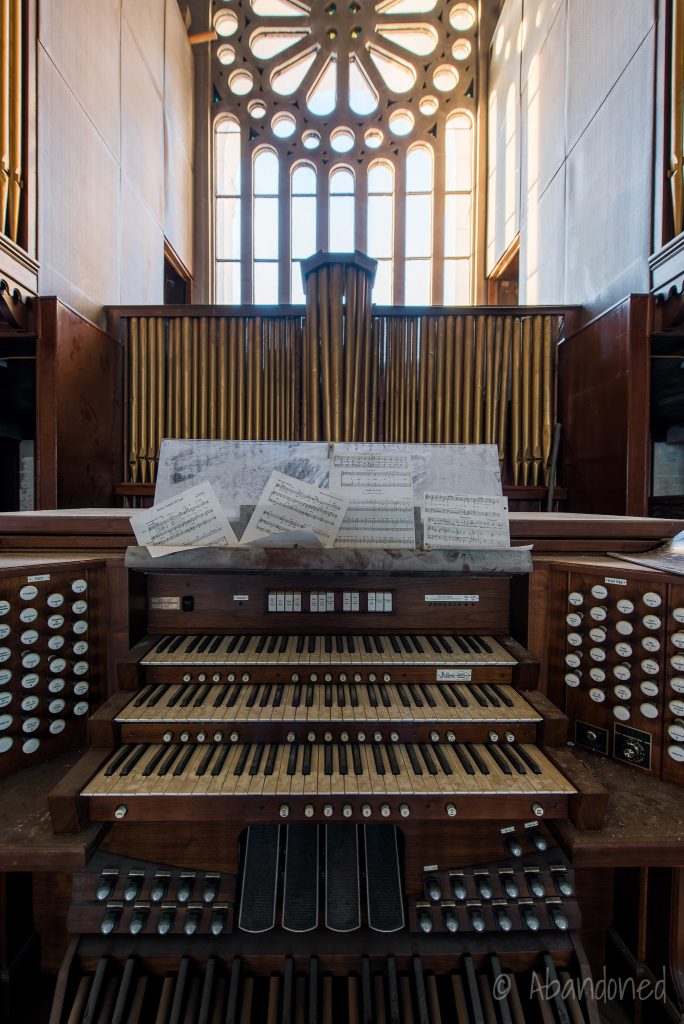 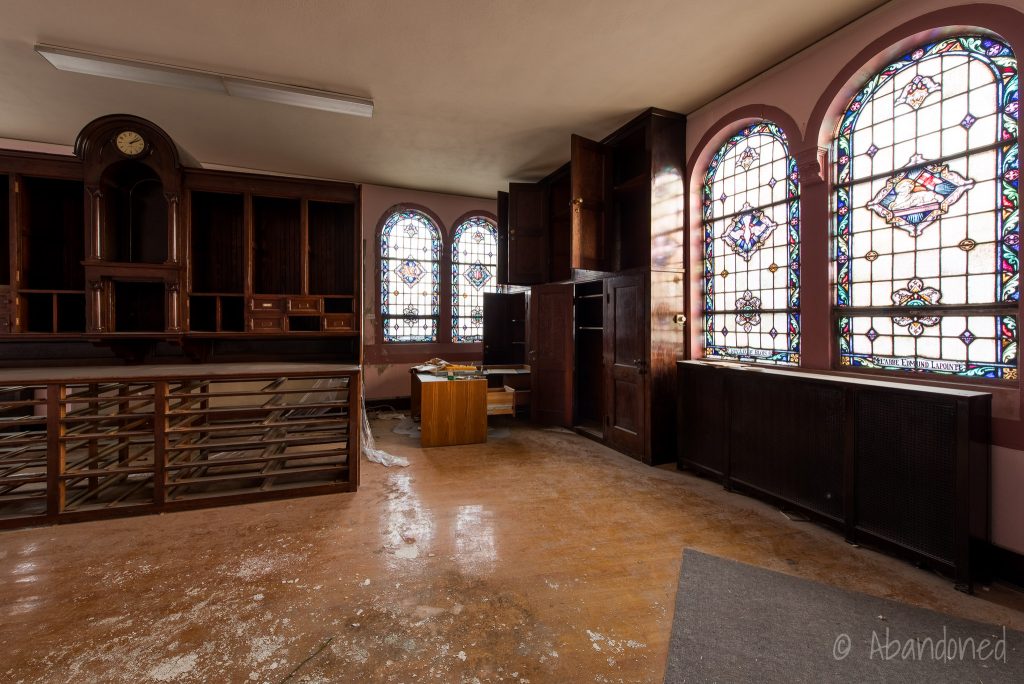 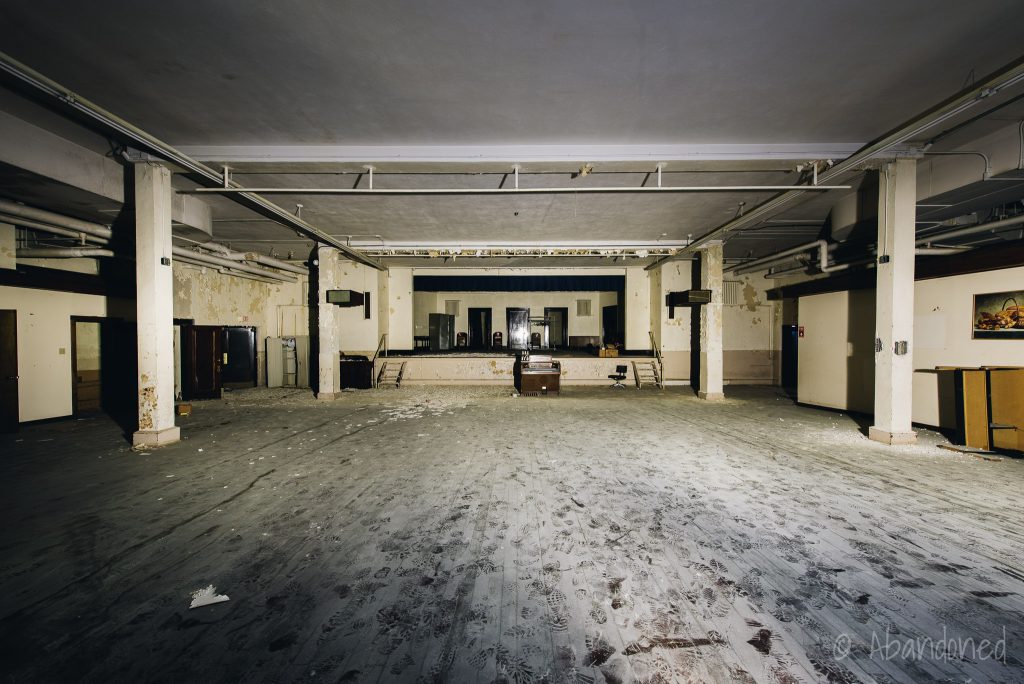