The New York, Ontario & Western Railway (O&W, NYO&W) was a regional railroad that connected Oswego, New York to Weehawken Terminal in New Jersey. It is the first notable railroad in America to have its mainline entirely abandoned.

The New York & Oswego Midland Railroad (NY&OM) was organized by Dewitt C. Littlejohn in 1868, who had envisioned opening up New York’s upstate interior to take advantage of its natural and agricultural resources. Construction began in Middletown, New York, and proceeded west, and instead of following broad river valleys and lighter grades, the route cut across numerous hills and valleys, which required the construction of extensive and expensive infrastructure. 1 The cost of the NY&OM’s construction caused the line to go into bankruptcy.

The NY&OM began using the Pennsylvania Railroad’s station at Exchange Place in New Jersey on September 3, 1869, which provided its passengers with ferry access to the Cortland Street Ferry Depot in lower Manhattan and the Desbrosses Street Ferry.

The NY&OM went into receivership on September 19, 1873, 6 and financial issues caused the entire route to be shut down for several months on February 27, 1875. The NY&OM was reorganized in 1880 as the New York, Ontario & Western Railway (O&W). 1 It completed its mainline to Oswego along the banks of Lake Ontario, where port services were established.

The O&W inherited branches to Delhi, New Berlin, and Ellenville, New York. In 1883, the New York, West Shore & Buffalo Railway (NYWS&B), which operated a through route from Weehawken, New Jersey north to Albany and west to Buffalo, completed a connection between Cornwall and the O&W in Middletown. 1 The O&W was permitted, via 52 miles of trackage rights, to run its trains on the NYWS&B Middletown Branch between Middletown and Cornwall and on its mainline from Cornwall south to Weehawken, New Jersey, giving the O&W access to New York City.

The New York Central & Hudson River Railroad eventually acquired control of the NYWS&B in 1885, renaming it the West Shore Railroad (WS). 1 2 The West Shore continued to allow the O&W access to Weehawken. The WS sold its Middletown Branch to the O&W in 1886.

The 1880s saw the development of resorts and camps in the lower Catskill Mountains. 2 The O&W established itself as the tourist carrier to emerging areas by Liberty and Monticello. The railroad also expanded its milk and dairy product haul operations, especially from farms between Monticello and Middletown.

In 1890, the 54-mile Scranton Division was completed from Cadosia Summit southwest to Scranton, Pennsylvania, giving the O&W access to the rich anthracite coal fields and connections with the Central Railroad of New Jersey, the Lackawanna, and the Lehigh Valley railroads. 1 Anthracite coal was considered cleaner to burn than other types of coal and was an important use of heating fuel for residences and businesses. A significant portion of the coal was sent to Oswego, where the Delaware & Hudson Canal Company sent the commodity by boat to Canadian markets.

By the close of the 19th century, the O&W operated over 568 miles between Weehawken and Oswego and had four divisions: 1

The Scranton Division was then double-tracked in part because of the traffic generated by the anthracite coal industry, followed by the dualization of the track in the Southern Division from East Branch to Cornwall because of resort traffic in the Catskill Mountains. 1 It then updated the Scranton Division with block signals and installed centralized traffic control (CTC) from East Branch to Cadosio, a distance of eight miles.

In October 1904, the O&W came under the control of the New York, New Haven & Hartford Railroad (NH), then led by industrialist and banker J.P. Morgan. 1 A new president, Charles Mellen, attempted to use the O&W as a bartering chip with the New York Central (NYC) to leverage the NH’s interests elsewhere. It proved unsuccessful and led to the railroad being neglected and poorly maintained.

The NY&OM’s Auburn Branch extended for 85 miles between Norwich and Scipio near Auburn. 6 It was intended to be a westward extension of the NY&OM to Buffalo but was never completed after the railroad went into receivership in 1873.

The segment between Norwich and Cortland via DeRuyter was completed circa 1870. In 1872, the Utica, Ithaca & Elmira Railroad (UI&E) obtained trackage rights over the NY&OM between Cortland and DeRuyter after acquiring the Cazenovia, Canastota & DeRuyter Railroad, giving it a connection to the New York Central at Canastota. 6

The NY&OM dismantled the Auburn Branch between Norwich and DeRuyter in 1882. 6 The 19½-mile segment between DeRuyter and Cortland continued to be leased to the UI&E until it was acquired by the Elmira, Cortland & Northern Railroad (the antecedent of the Lehigh Valley). The Freeville to Scipio segment was sold to the newly-organized Ithaca, Auburn & Western Railroad, extended to Auburn in 1889, and abandoned in 1891.

Anthracite coal began waning as a fuel source in the 1920s, replaced by petroleum, and it was not suitable coal for use by industry because of its higher mining costs. 1 Improved roads into the Catskill Mountains caused passenger traffic to dramatically decline by the 1930s.

Traffic on the O&W peaked in 1929, but by 1932, carloads had declined by half. 1 The biggest decline was in anthracite coal. On February 25, 1937, the O&W advised the holders of its bonds that it would not be able to pay the interest due on March 1. 2 Two of its railroad-owned collieries had defaulted on their loans from the railroad. The O&W entered into voluntary bankruptcy.

In a desperate vain to prop up traffic, it began streamlining its passenger operations and began to launch merchandise through freights from Mayfield Yard in Scranton to the Maybrook Yard in New Haven. 1 The company then spent $300,000 to revitalize its Oswego ports to lure Canadian National and Canadian Pacific car ferry services across Lake Ontario. Neither railroads were interested in the proposition.

Between 1945 and 1948, the O&W retired its steam locomotives for the new Electro-Motive FT’s and F3’s, aided by Reconstruction Finance Corporation loans. 1 The company then began to remove most of its dual tracks along the Scranton Division and its Southern Division and installed automatic block signals. Seasonal passenger service in the Catskill Mountains ended in 1948 and all passenger service ceased after September 10, 1953.

Although the O&W shipped six million tons of anthracite coal in 1936, it had declined to just 307,521 tons by 1955. 1 Facing a bleak future, with creditors increasingly calling for the railroad to sell off its assets and recover their losses, the bankruptcy ordered the O&W to be liquidated on March 29, 1957. The dismantling of the railroad began in 1959.

The only portion to remain in use after the bankruptcy was a portion from Fulton to Oswego that was taken over by the NYC. 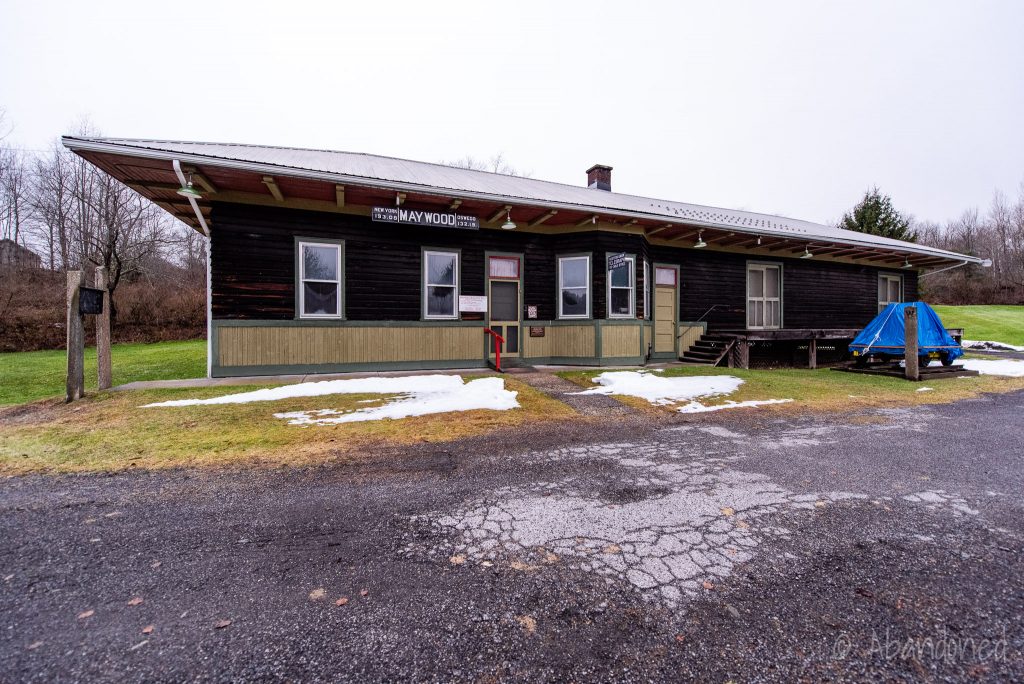 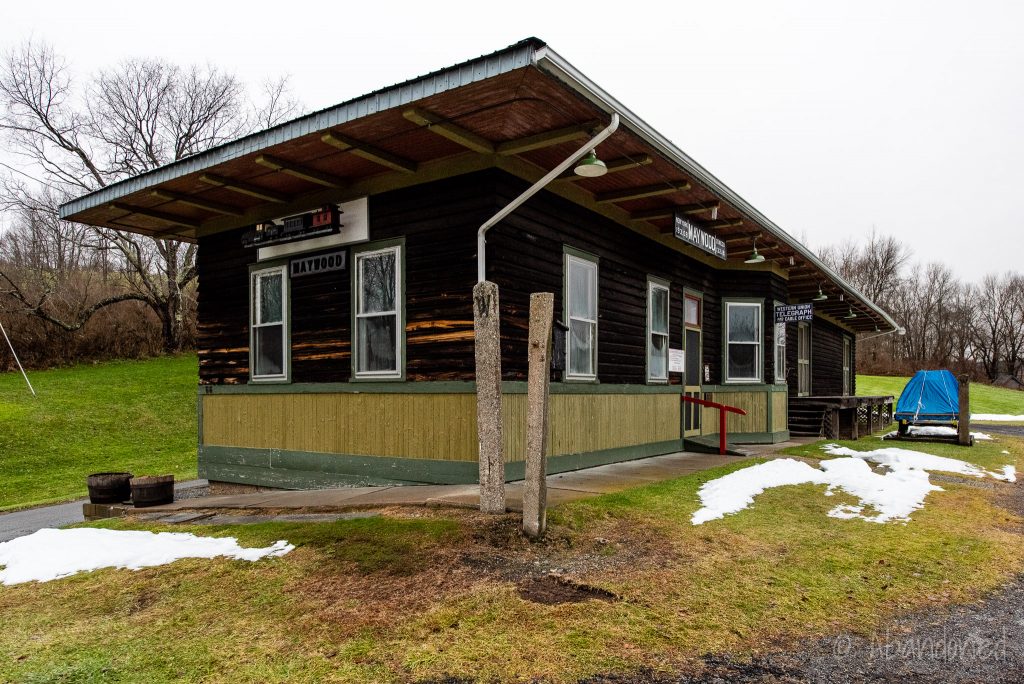 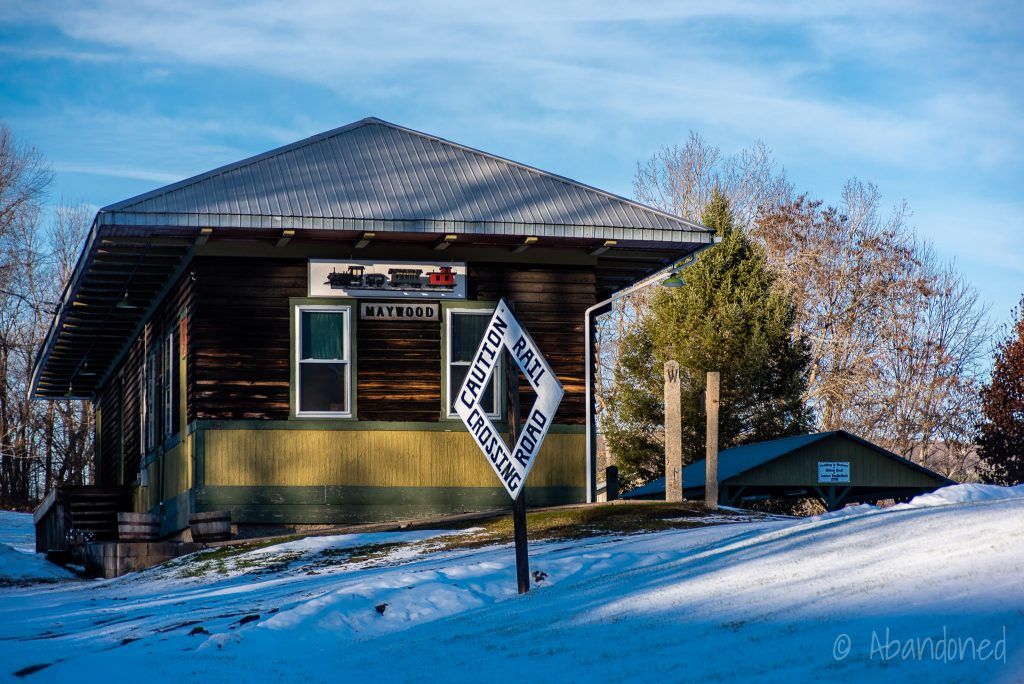 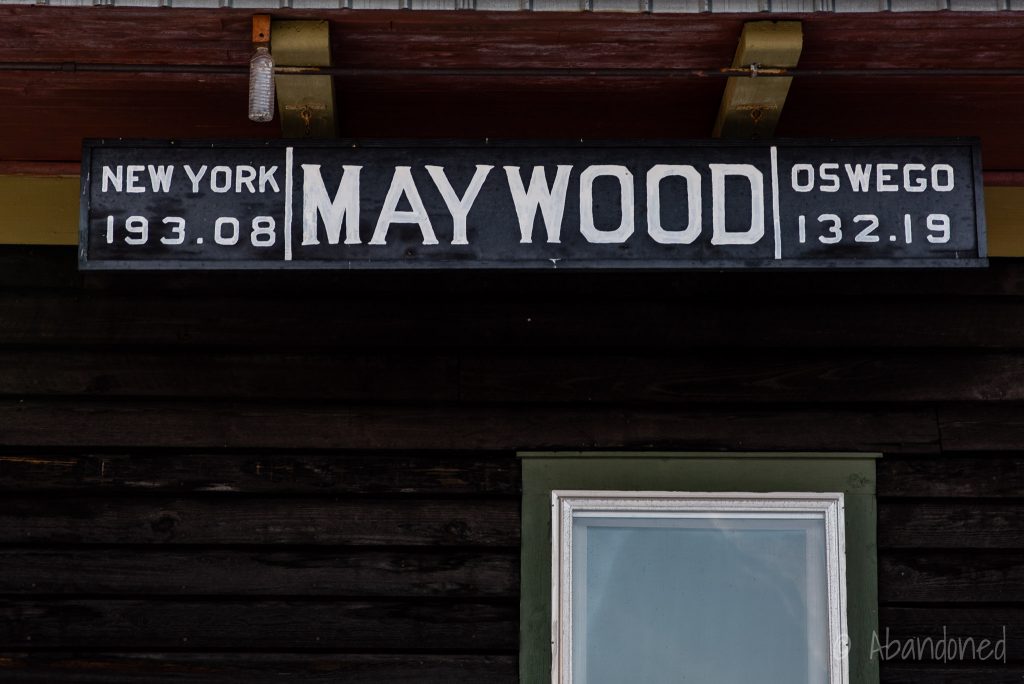 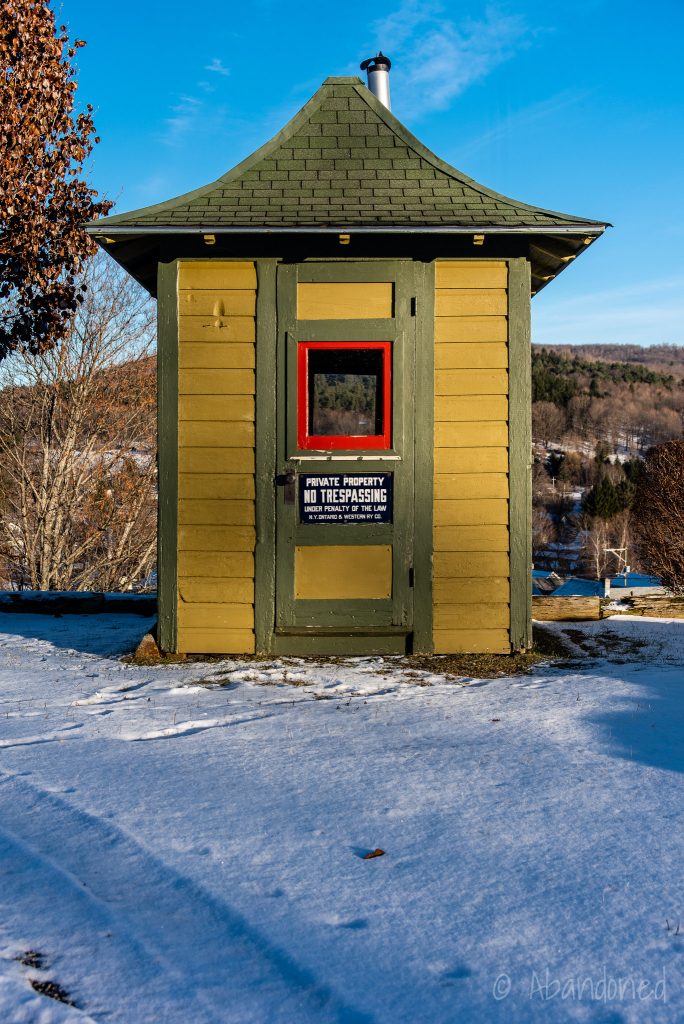 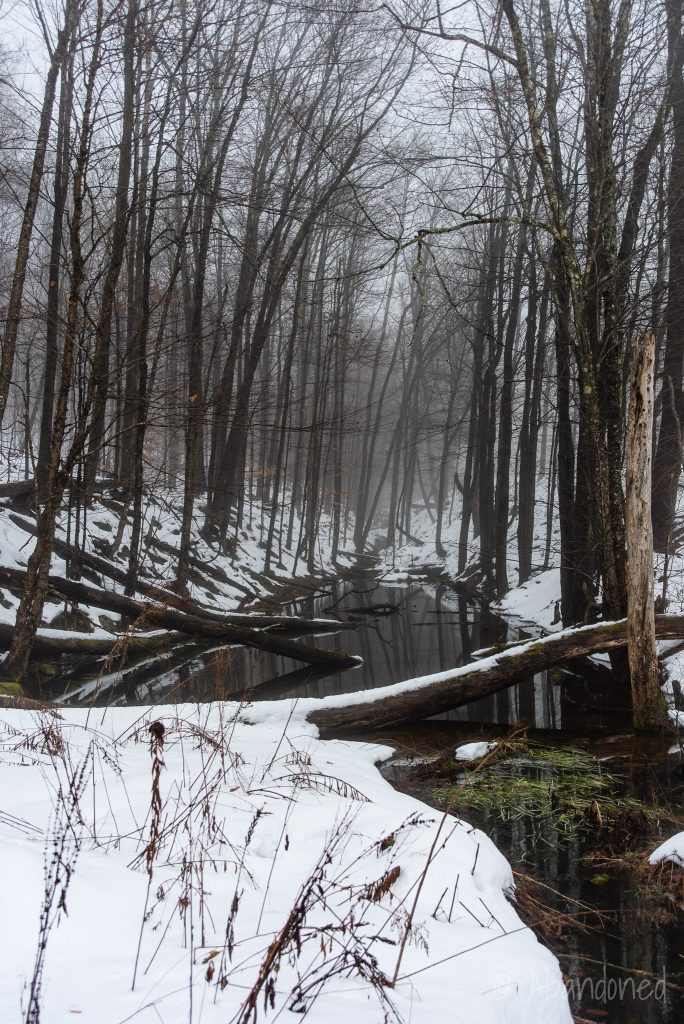 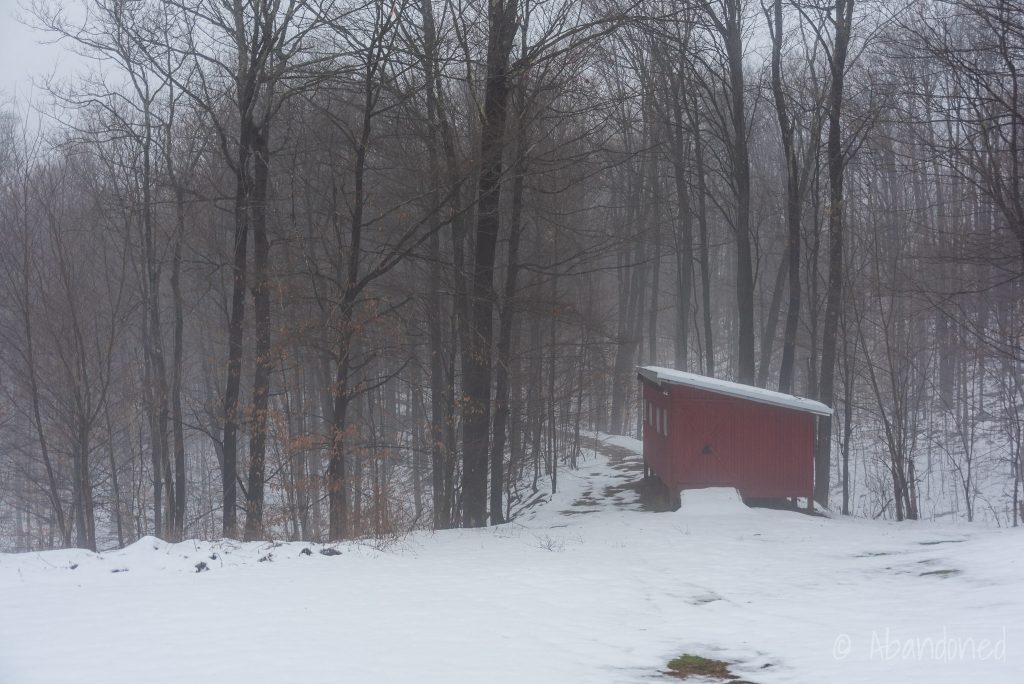 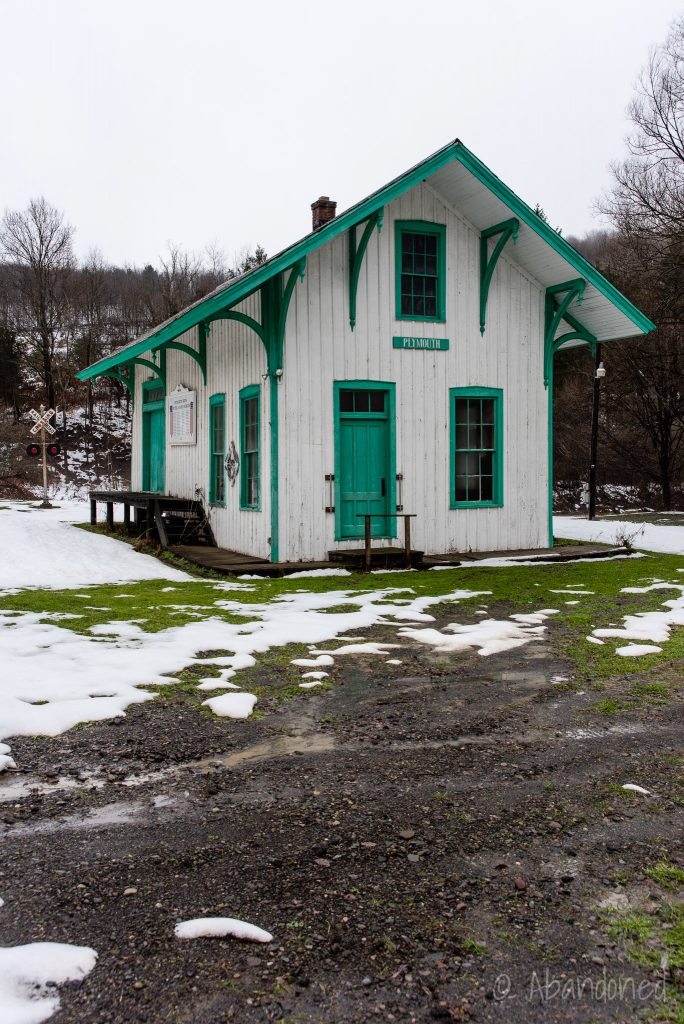 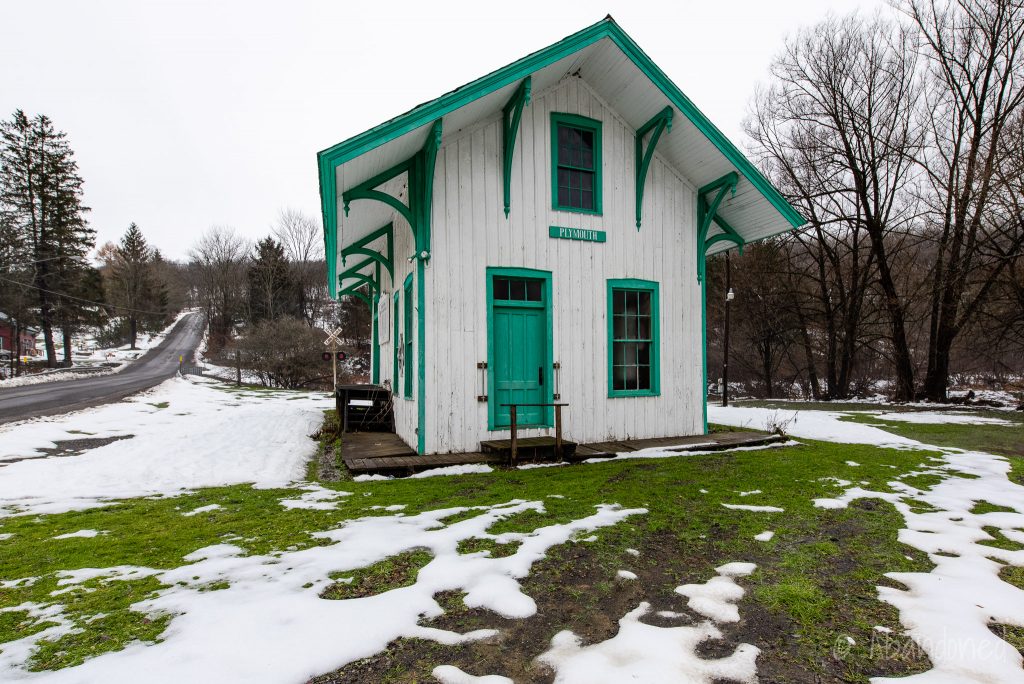 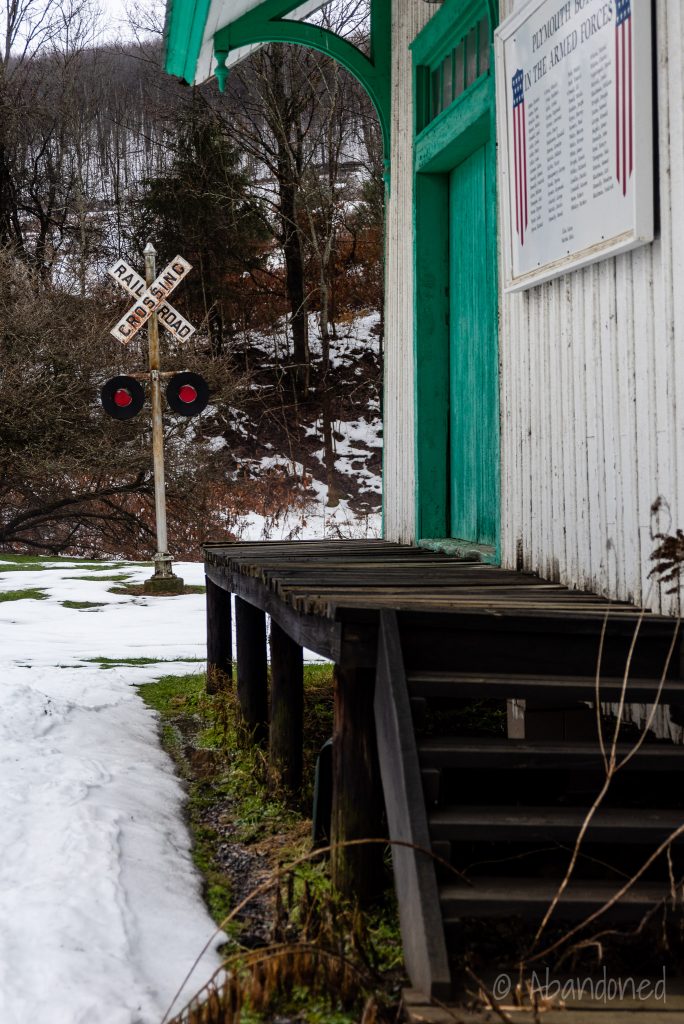 The Fallsburg Tunnel, originally known as the Neversink Tunnel, is located near South Fallsburg. The 1,123-foot tunnel was completed in 1886. 5 Improvements between 1889 and 1897 added 200 feet of brick arching and stone bench walls, followed by the erection of iron plates over the brick lining in 1930.

The Hawk Mountain Tunnel was approximately two miles southeast of Cadosia. 3 The construction of the NY Route 17 freeway in 1967 buried both portals.

The High View Tunnel, also known as the Shawangunk Tunnel or the Bloomingburgh Tunnel, is near High View and was completed in 1871 under Shawangunk Mountain by the NY&OM. 3 4 At 3,855-foot in length, High View is the longest among the four tunnels on the O&W.

The tunnel suffered from frequent rockfalls and required continuous maintenance. 4 A stone portal and 52 feet of brick lining were added to the northern terminus in 1887, followed by the addition of brick lining between 1895 to 1904.

The Northfield Tunnel is located southeast of Merrickville below Northfield Mountain. The 1,639-foot tunnel was completed in 1890 to replace a series of switchbacks. 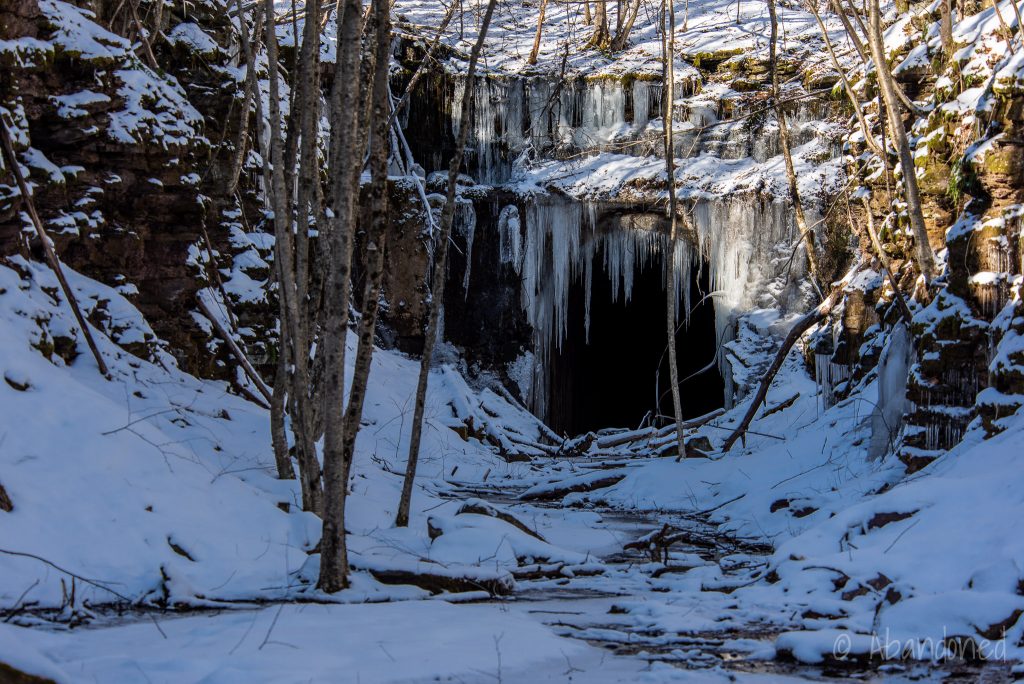 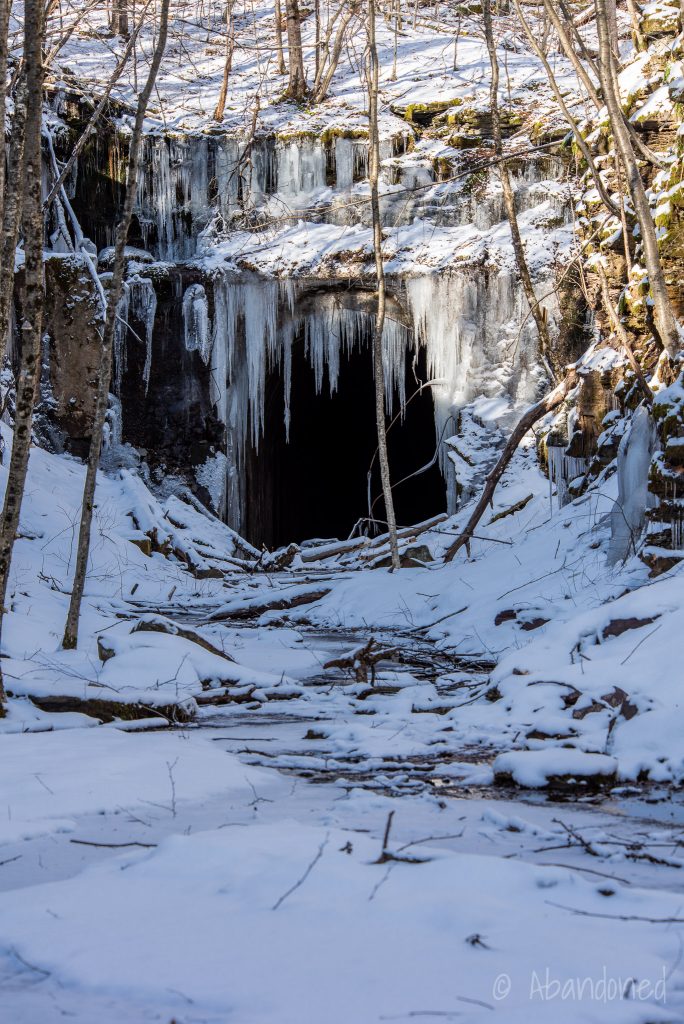 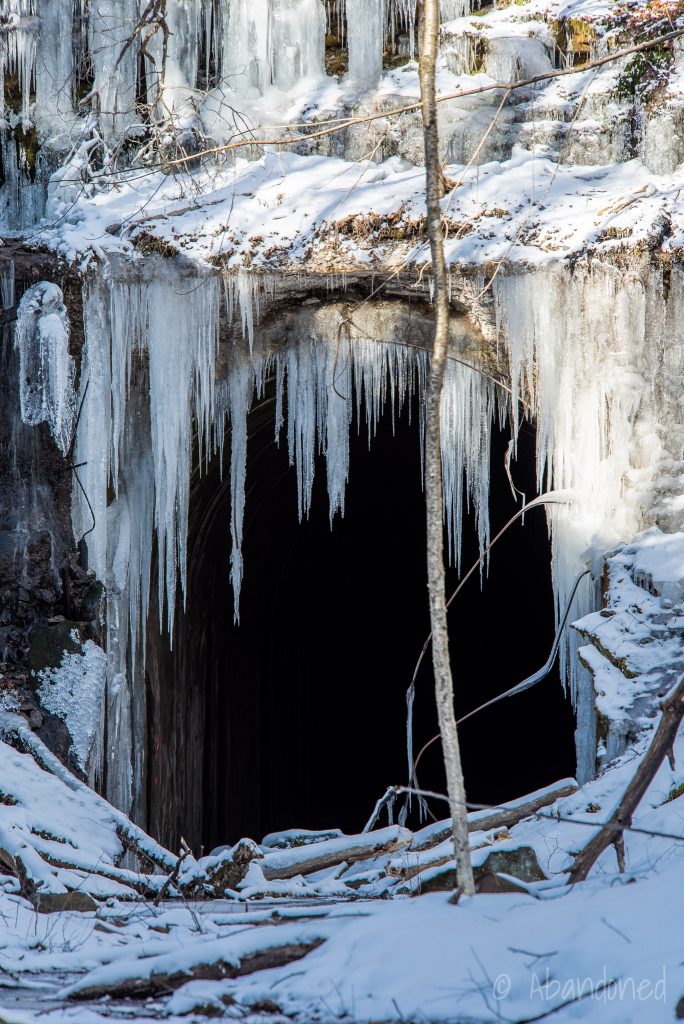 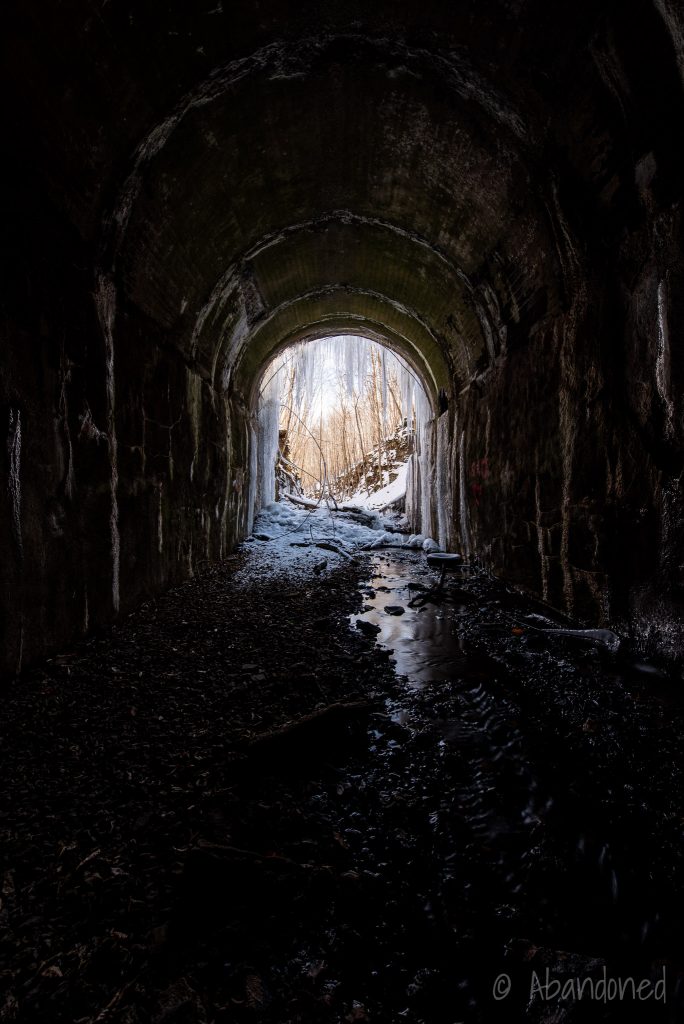 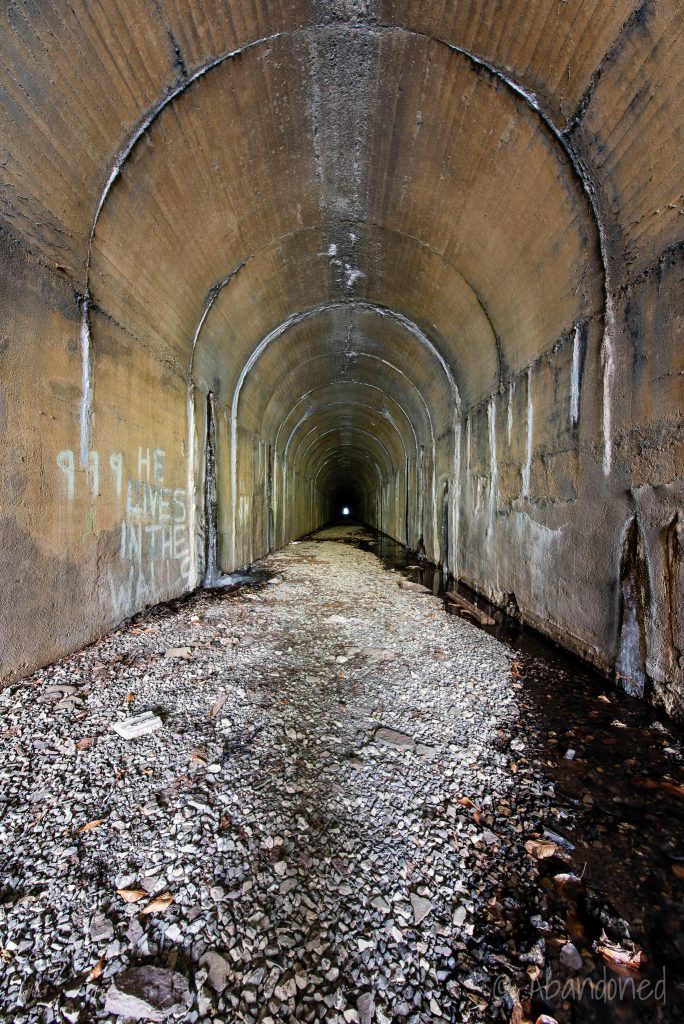 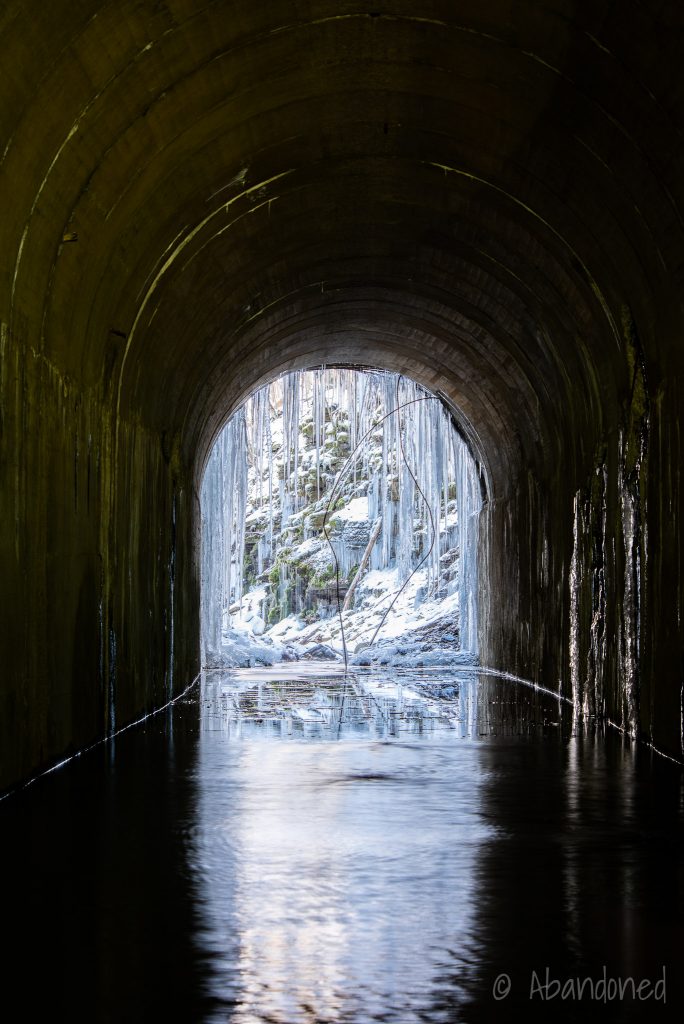 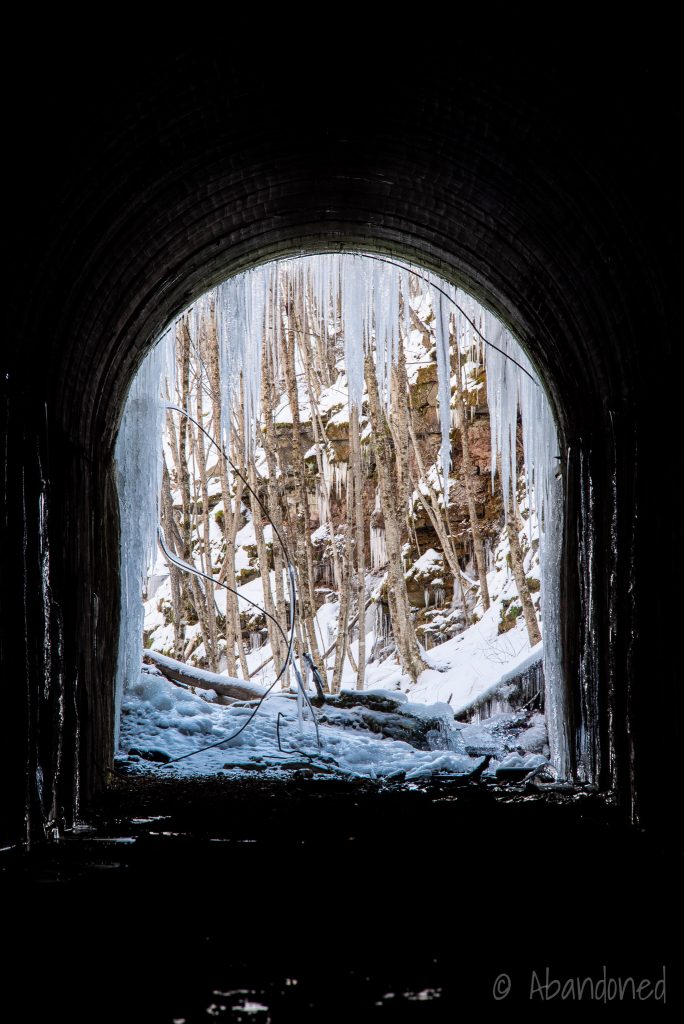 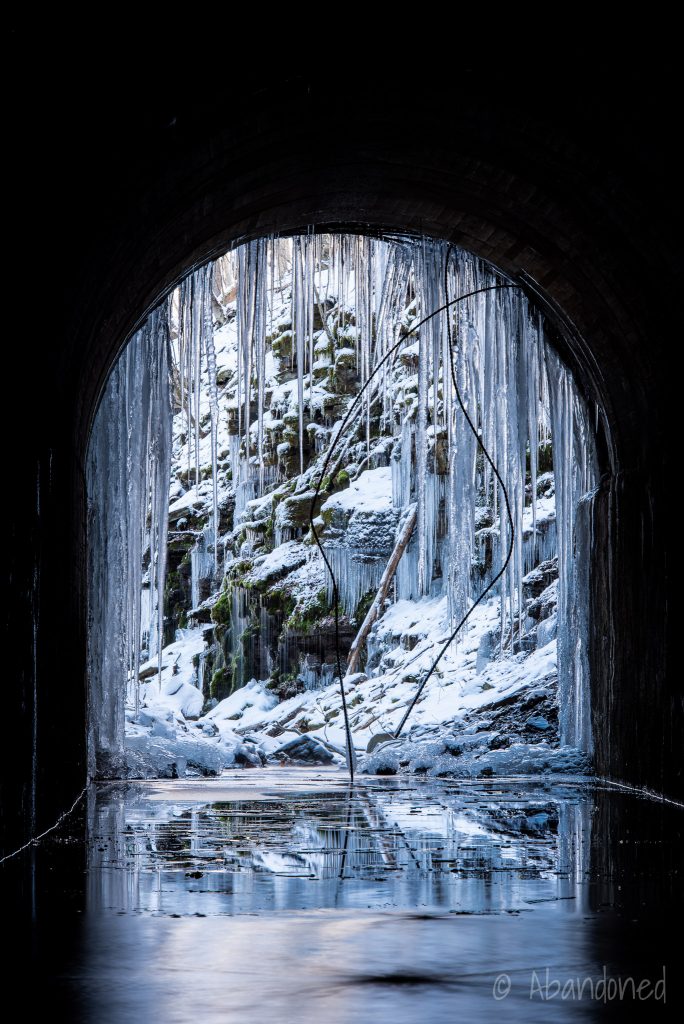 I spent Sunday, March 28 wandering the back roads of Kentucky with a good friend photographing a well-visited tobacco processing plant, a historic residence and a tuberculosis hospital. We headed o…
END_OF_DOCUMENT_TOKEN_TO_BE_REPLACED
Category NewsPosted on March 26, 2015February 24, 2020

There is not a place more worth saving than that of which has historic value and remains completely intact from the time of its importance. The Lonaconing Silk Mill, owned by the Klotz Throwing Com…
END_OF_DOCUMENT_TOKEN_TO_BE_REPLACED