The Stearns Coal & Lumber Company is a former coal and timber extraction outfit that operated in northeast Tennessee and southeast Kentucky.

Stearns then acquired 50,000 acres of timberland on the Cumberland Plateau in southern Kentucky and northern Tennessee and then leased another 25,000 acres in Whitley County, Kentucky, where a company store was opened at the newly formed town of Stearns. 1 After coal was discovered, Stearns Lumber was renamed to Stearns Coal & Lumber Company in 1910. 1 6 The area quickly became the hub of a logging and mining empire that timbered and mined 200 square miles of land, employed over 2,200 people, and managed 18 coal and lumber camps.

The Tennessee & Tennessee Railroad was formed in 1902 as a short spur from the Cincinnati, New Orleans & Texas Pacific Railroad at Stearns to Barthell. 2 The line was eventually extended to Mines No. 10 and No. 11 near Yamacraw in 1906, and to a logging railroad, also owned by Stearns, at Bell Farm.

In its peak year of 1929, the company mined one million tons of coal. 10 Coal reserves began being exhausted at Exodus and Fidelity in the 1930s, and most of the timber had been stripped from the region by 1950. 2 A large underground mine at Cooperative closed in 1950, and the tipples at Yamacraw and Worley were closed in 1953, leaving only the mine at Blue Heron and Mine 16 at Oz operational. Blue Heron closed in the early 1960s, followed by Mine 16 in 1966, leaving only a few truck-dump operations remaining. The Justus Mine opened at Barthell in 1967.

Despite the wealth generated by natural resource extraction, most residents in the area were mired in poverty, trapped in the area’s two major but declining industries—logging and mining—both capitalized and controlled by outsiders who cared little about the landscape or its citizens. 11 Senator Baker of Tennessee entertained the idea of building a dam on the Big South Fork River to emulate the success of TVA dams, which brought cheap electricity, jobs, tourism, and related benefits. But both Senator Baker and Senator John Sherman Cooper of Kentucky recognized that the Big South Fork region, with its winding, deep gorges, spectacular arches, ancient rock shelters, and diverse botanicals, deserved federal protection.

Conservation-minded interests helped pass legislation in Kentucky to create the Wild Rivers Act to protect nine rivers with exceptional quality and esthetic character, which included the Big South Fork. 7 8 It was followed up with the creation of the Big South Fork National River and Recreation Area in March 1974, thanks to the efforts of Baker and Cooper. 11

In response, the Stearns Coal & Lumber Company began to heavily log and mine its landholdings to achieve “maximum economic benefit,” and attempted to skirt around amendments to the Wild Rivers Act. 9 Its efforts were struck down in courts. In January 1976, the only remaining mining operation of Stearns was sold to Blair Fork Coal Company, a subsidiary of the Blue Diamond Coal Company. 10 The Justus Mine, the last in action in the Big South Fork reserve, closed in 1987. 2

Blue Heron, also known as Mine No. 18, is a former coal mining community that opened in 1937 and operated until December 1962 when operations were no longer profitable. 3 The town was abandoned, and the buildings were either removed or collapsed. No original buildings were standing when the community was “re-created” in 1989 as an outdoor museum with ghost structures built on the approximate site of the original buildings. 11

Vast quantities of No. 1 coal were expected at Mine No. 18, but no core drilling to test the height or extent of the coal seam had been conducted. 5 Mine No. 18 played out early with even No. 2 coal, which contained more sulfur, with seams only around 32 inches in height on average.

The coal tipple at Mine No. 18 separated the various sizes of coal coming from the mine in coal cars. 4 The mine cars opened at the bottom, which dumped coal onto a 120-ton hopper that fed to a 76-foot conveyor belt towards a series of shakers and screens which allowed smaller-sized coal to flow down via loading booms to awaiting railroad cars below. Larger chunks of coal that could not fit through the shakers and screens were sent to crushers and re-sent back onto the conveyor belt. 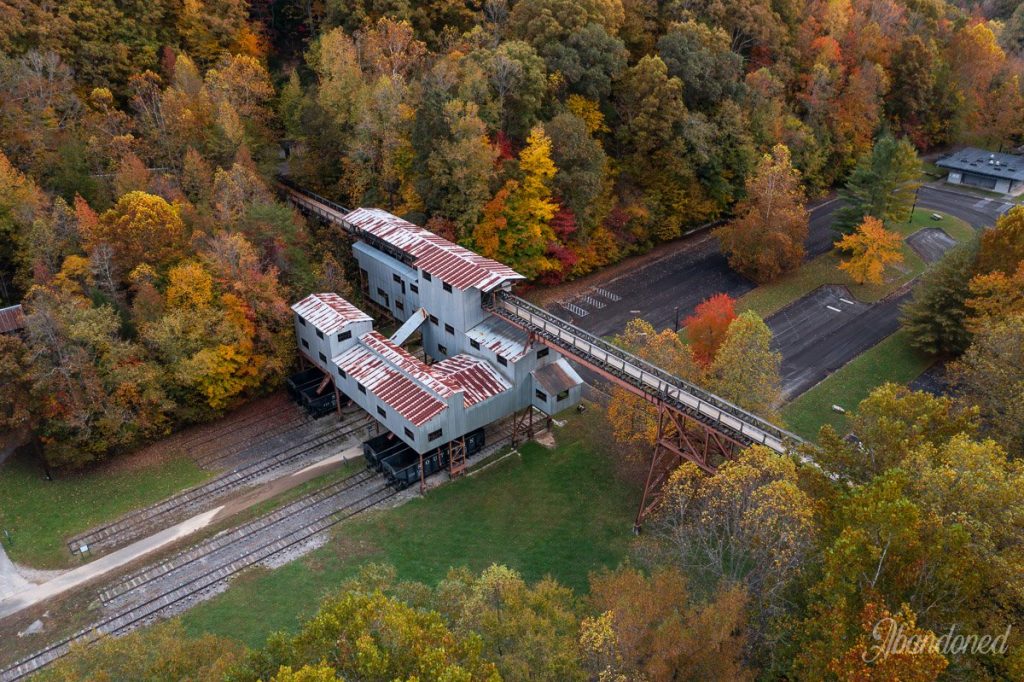 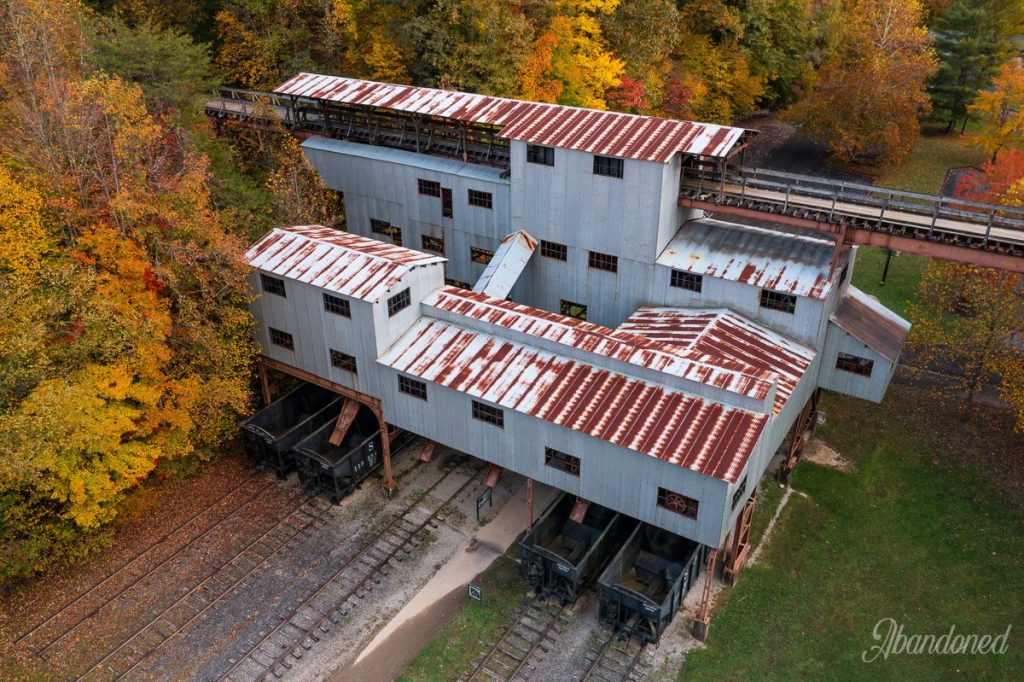 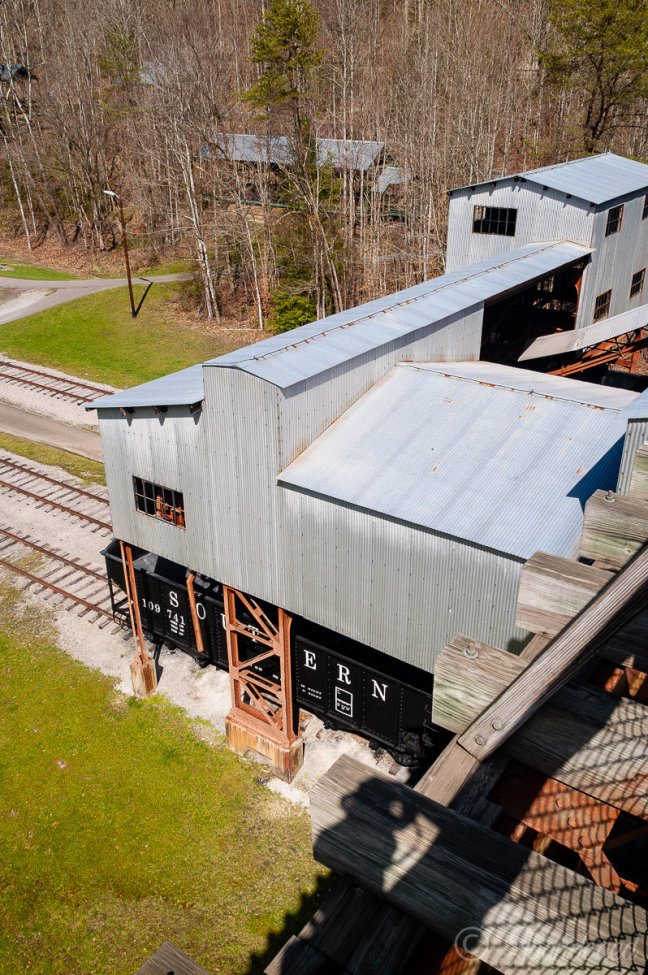 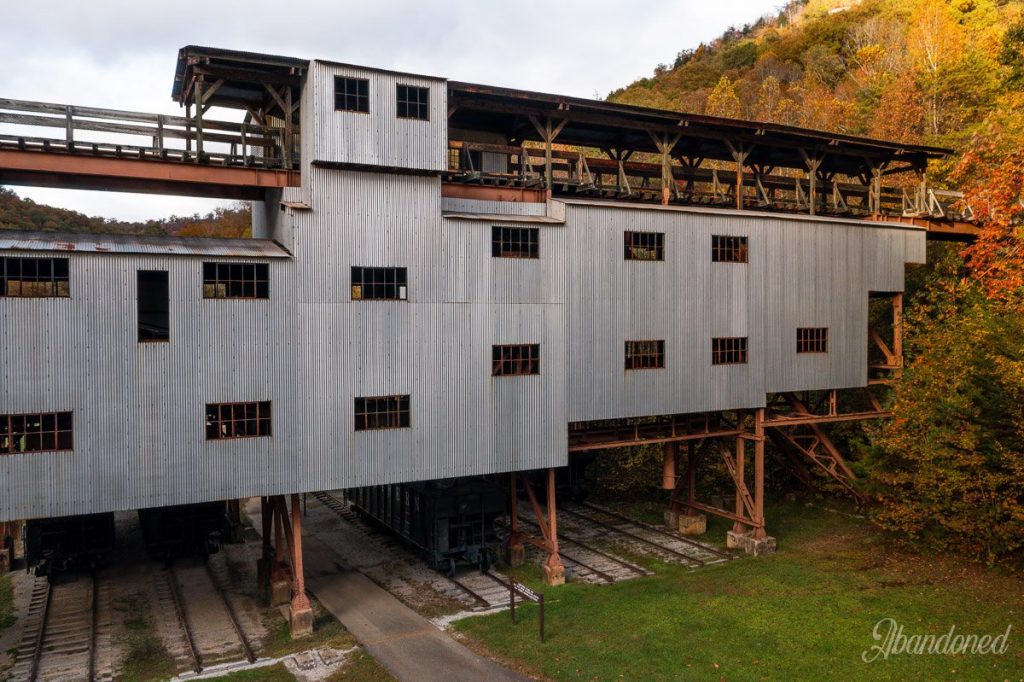 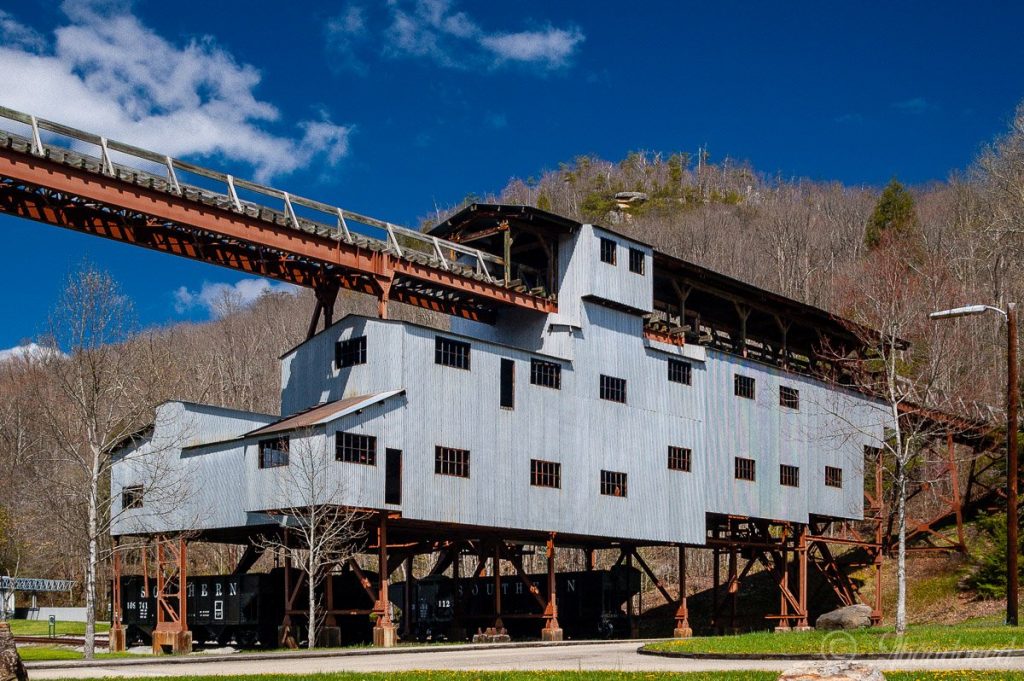 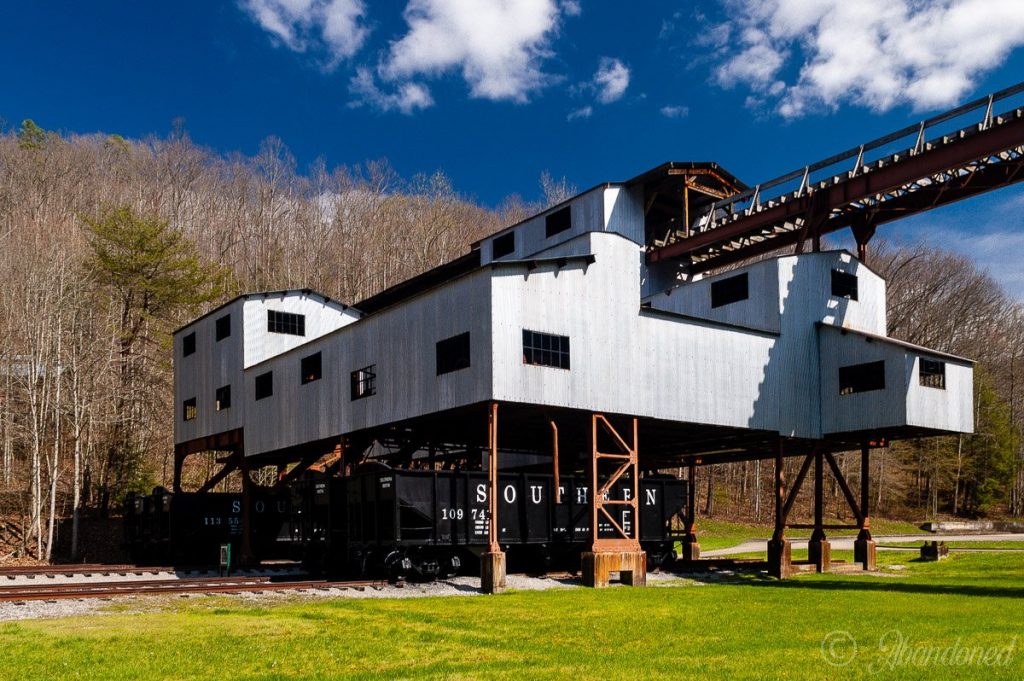 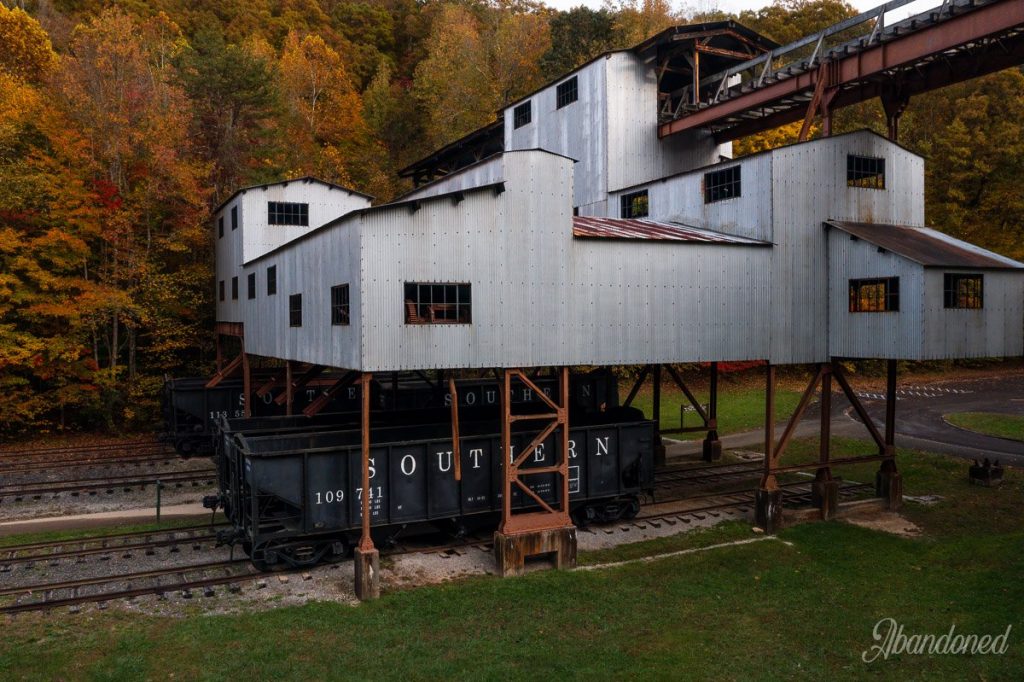 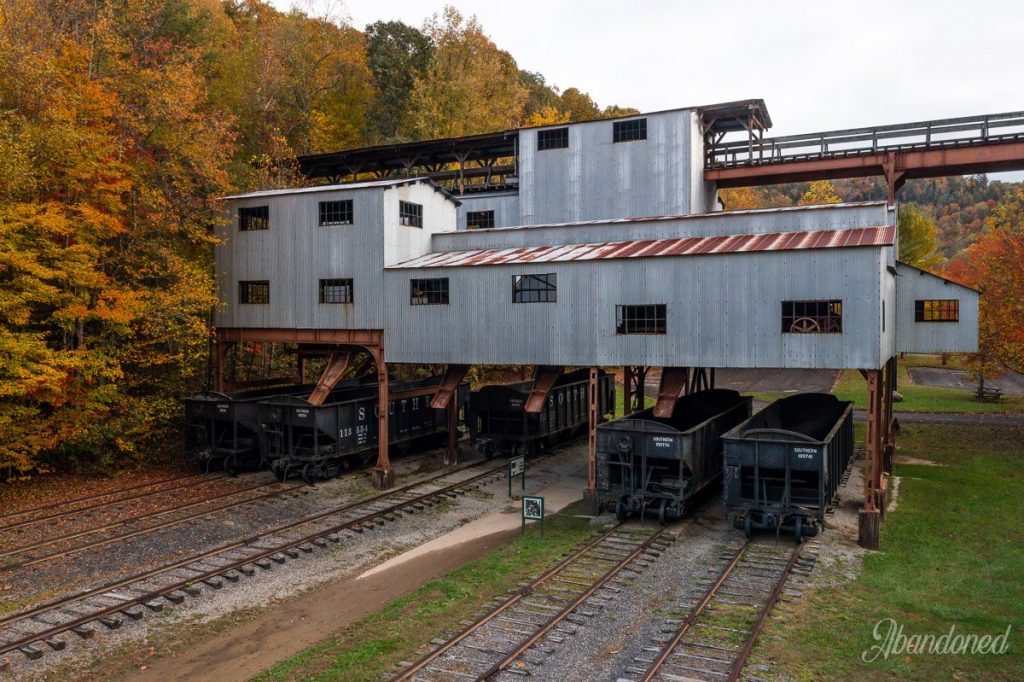 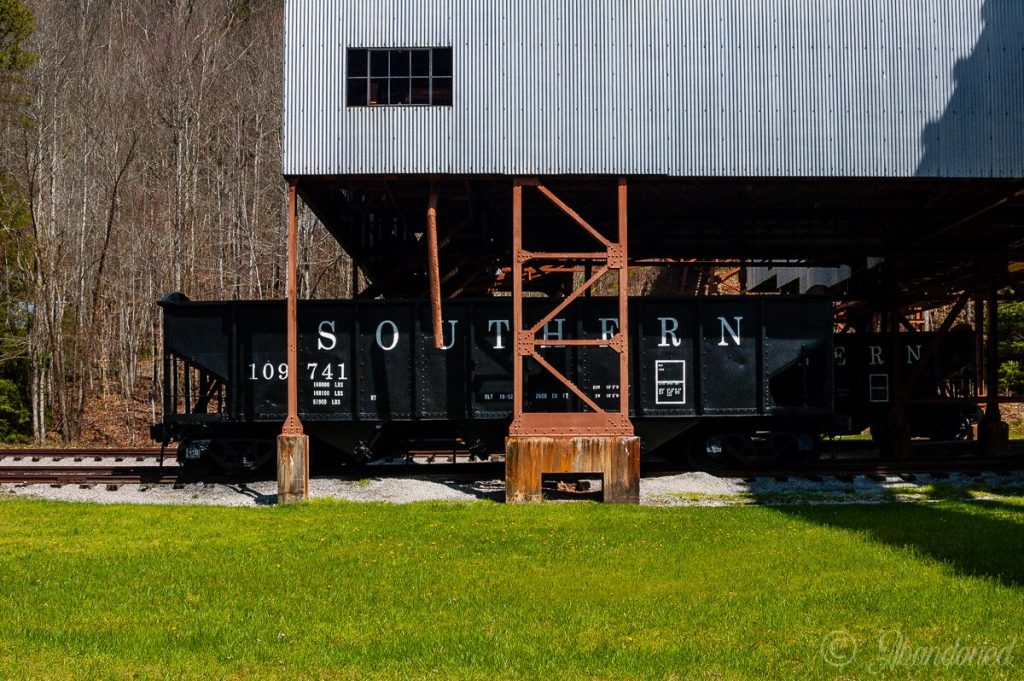 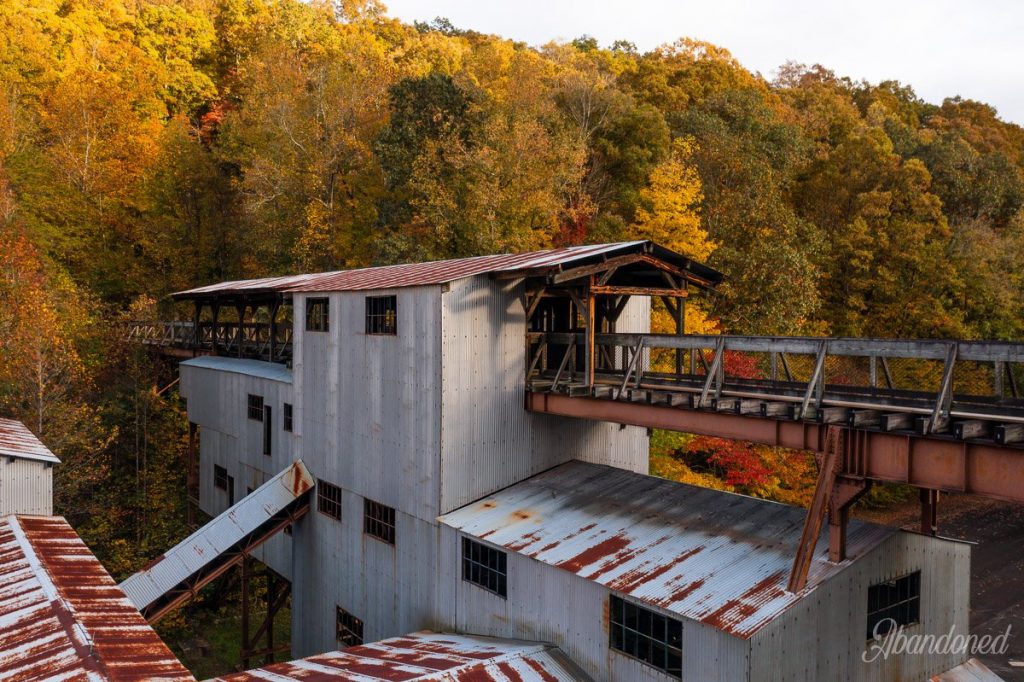 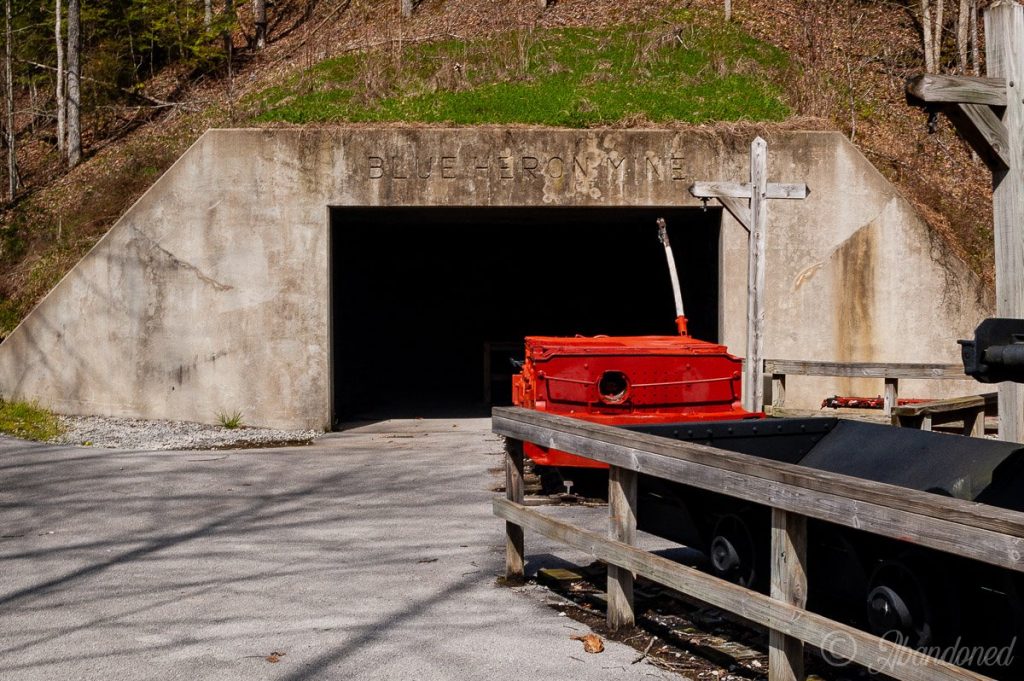 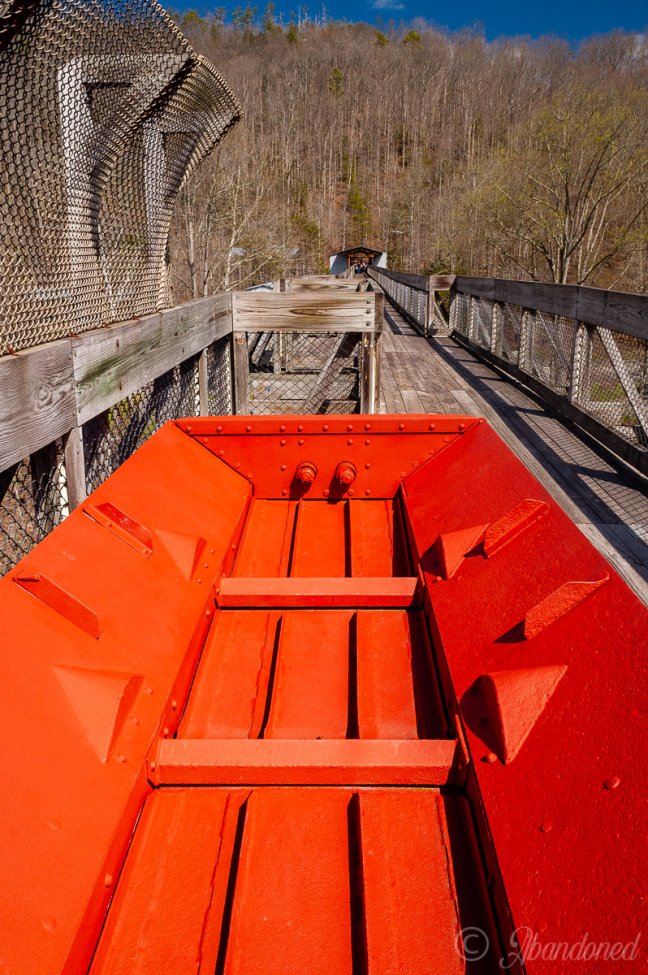 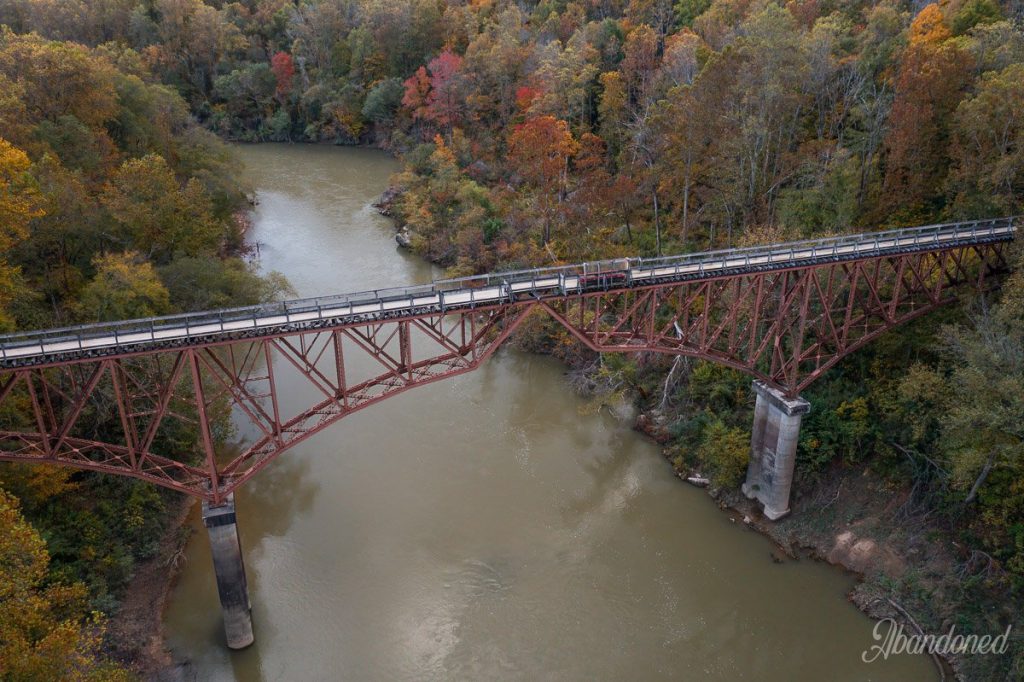 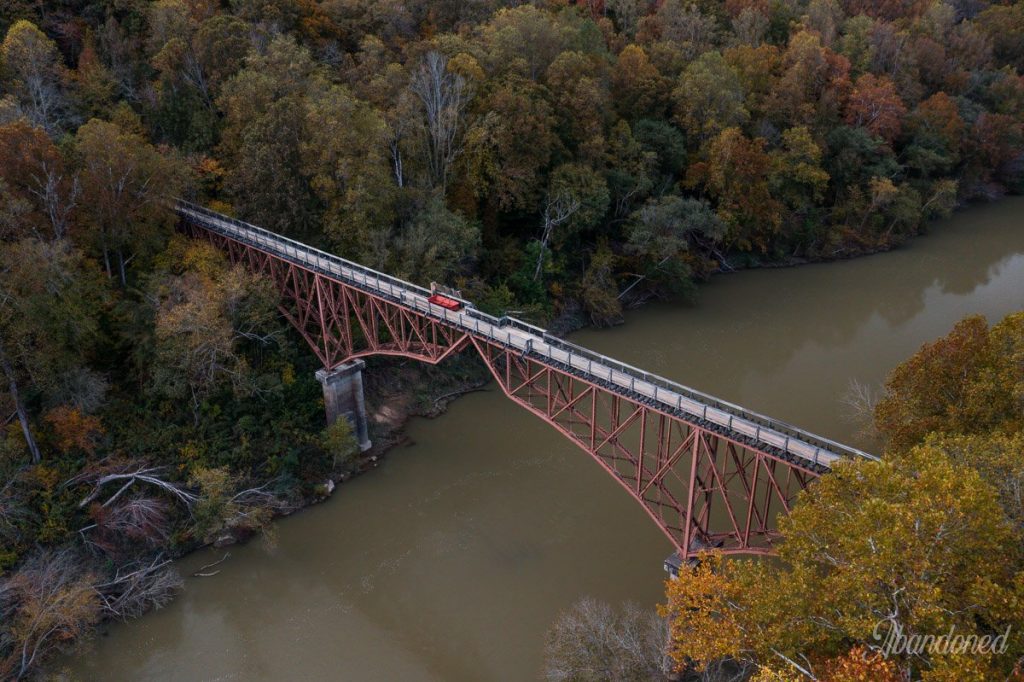 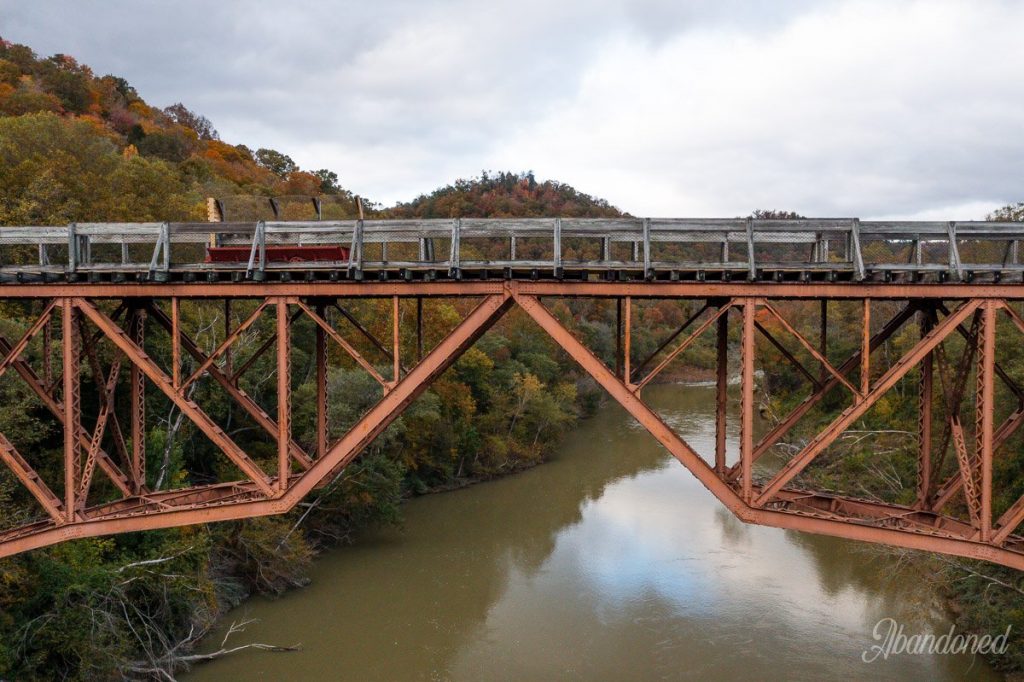 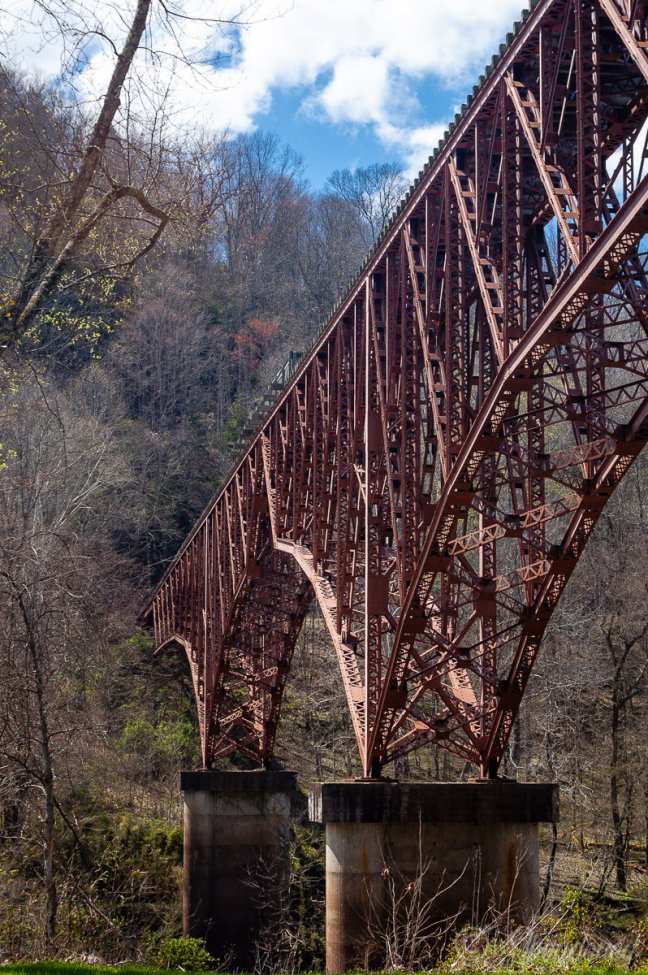 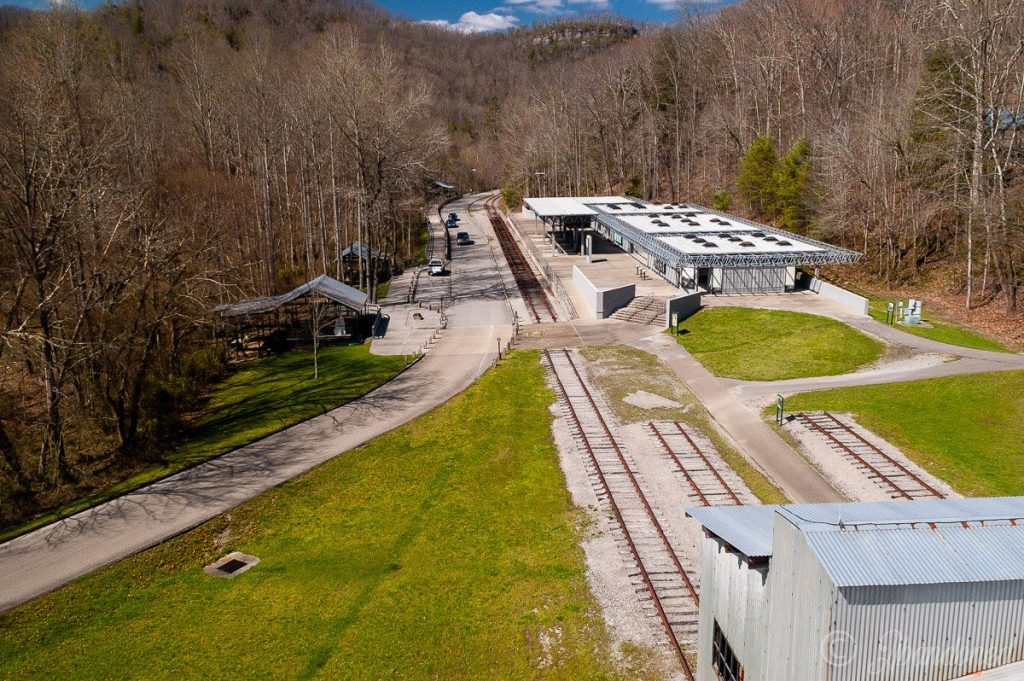 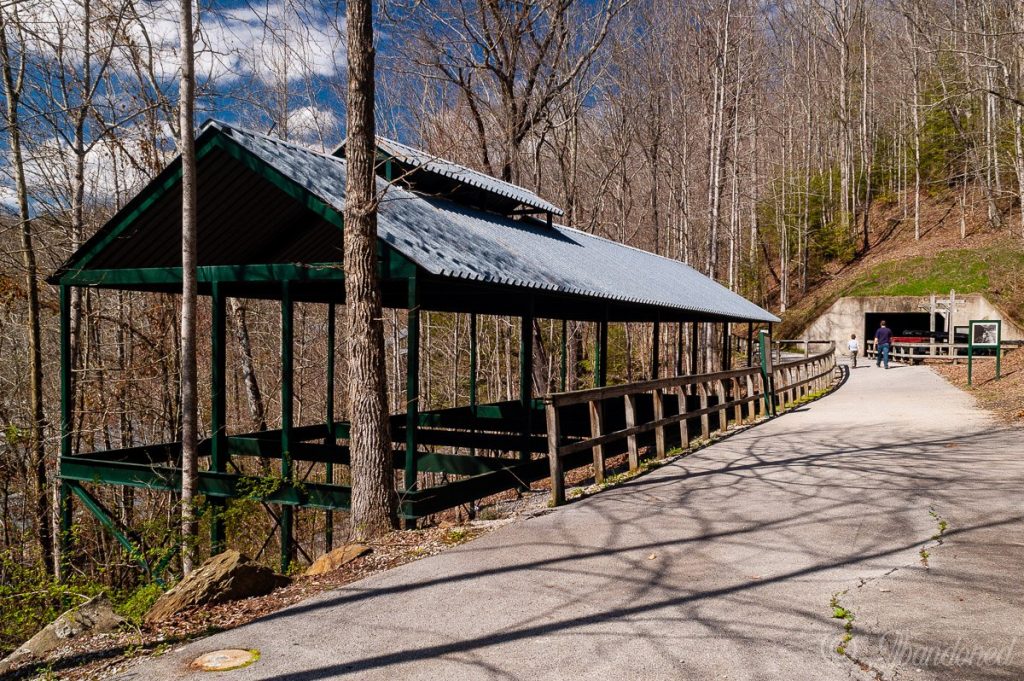 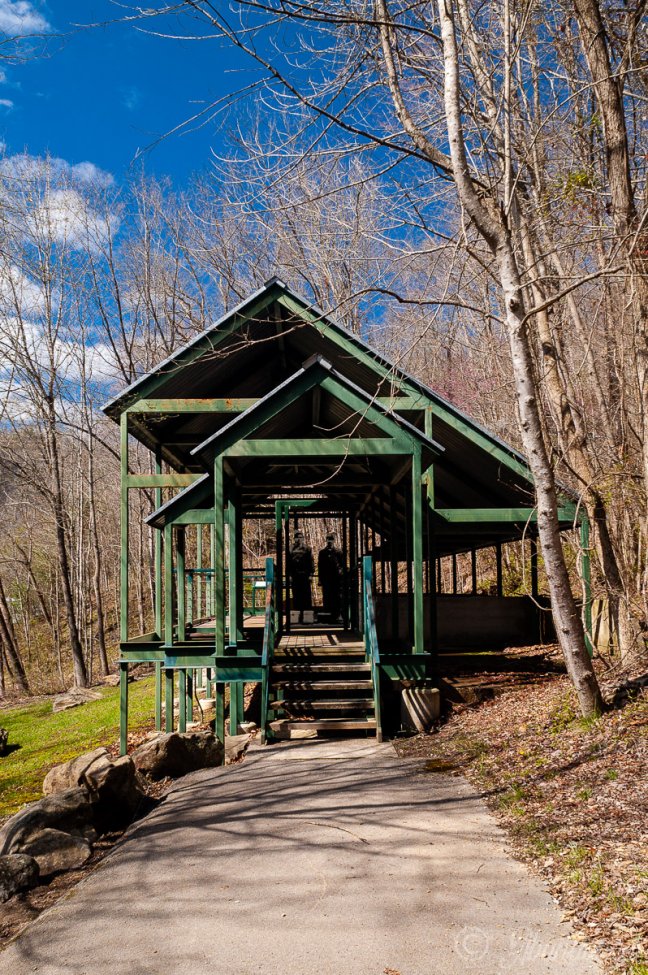