From the window of my hotel room in Beckley, I could see the leaves billowing down the street among a fine rain punctuated by dark, gloomy skies. It was perfect road trip weather,

Dense fog and misty rain greeted the window of the hotel room in Beckley as I huddled inside from the elements. Some would not be encouraged by such weather but I found it to be perfect road trip conditions, and I was determined to make the Alderson Academy my first visit of the day.

Located in a remote corner of the Mountain State, Alderson Academy is far from the hustle and bustle of a major city and surrounded by miles upon miles of undulating countryside, quaint family farms and meandering stream. I opted for the back roads to take in the ambiance, and I arrived at the front steps of the abandoned school mid-morning.

It wasn’t that long ago that the Alderson Academy was the pride of the community. A pond had once accentuated the classically designed front, long filled in and replaced by derelict trailers and a well-worn mud slop of a road. Neatly trimmed landscaping was left to grow into obtuse creatures, hiding feral cats, needles, and trash. A pungent odor of mold, damp, rotting wood and decay pilfered out of the building’s many gaping holes. The structure was in worse shape than I had remembered from years back, and portions of the roof were giving away.

The privately-owned Academy graduated its first students in June 1903 and flourished for several years as public high schools were far and few between. Enrollment lagged as public institutions were developed and the school was eventually turned over to the West Virginia Baptist General Association. The outlook did not improve and the school struggled with admissions and financial numbers until 1918 when it added two-year college-level courses and became the Alderson Junior College.

A new, larger four-story brick building was constructed in 1924 and the Academy reached peak enrollment in 1930. It merged with Broaddus College in October 1931 and the Alderson campus was mothballed. The buildings were then used by Armstrong College between 1935 and 1953 when a group of independent Baptists formed the Mountain State Baptist School. It operated until the 1980s when financial difficulties forced its closure.

Trekking through the building was a visual treat. I was expecting the campus to be vandalized, considering the length of its abandonment, but the walls were nearly graffiti-free, the windows mostly intact, and the auditorium spotless. There wasn’t much to lament over other than significant deterioration on the upper floors.

East of the Alderson Academy is a region known as the “Irish Corner,” named for early Irish immigrants who had settled in the high elevation plateau in the late 19th and early 20th century. The area is dotted with large family farms and a few small and scattered settlements, hemmed in by Flat Top Mountain, Kates Mountain, and a few winding streams. I set out to explore this vast realm, setting off on a long journey along two and one-lane country roads.

Along the way, I came across the circa 1900 Mt. Zion United Methodist Church near Hokes Mill. Methodism first came to the county before the first General Conference of the Methodist Church in 1784. Early churches were often crude log cabins that were later upgraded with contemporary materials, and where crude roads hampered travel to established churches, encampments for religious worship were built in the forests.

The Irish Corner region was peaceful. For over an hour, I piddled around the countryside. As I approached Organ Cave, a natural and cultural landmark, the rain had stopped and the fog began to slowly lift as I approached Ronceverte.

Although I was expecting a quaint riverside community alongside the Greenbrier River, Ronceverte had the perception of a typical rust belt city. My mood was probably underscored by the murky weather. The town developed around a grist mill constructed by Thomas Edgar and his sons and was relatively obscure until the conclusion of the Civil War, when Colonel Cecil C. Clay, a New York entrepreneur, began to acquire thousands of acres of virgin forest along the proposed right-of-way of the Chesapeake & Ohio Railroad through the region. Other speculators joined in and were rewarded when the railroad was completed from ports in eastern Virginia to Huntington, West Virginia in 1873, linking two major bodies of water and ports together for the first time: the Atlantic Ocean and the Ohio River.

Anticipating the inevitable coming of the lumbering industry, Clay platted out a city. Ronceverte, as it was soon named by Clay, blossomed into a hub of the timber, notably because of Clay’s new enterprise, the Saint Lawrence Boom & Manufacturing Company. The largest steam-powered sawmill in the world was soon erected and by 1881, the firm was the largest in the United States. As with all exhaustible resources, the boom times did not last for long and by 1910, most of the marketable wood had been cut and the sprawling Saint Lawrence Boom & Manufacturing facility closed.

Ronceverte’s hay days may have begun and ended with the timber industry, but the town didn’t wither away because of the railroad and a diversified economy. Many of its intricate historic structures were built in the 1910s and 1920s, such as the old Greenbrier High School.

Another sharp building is the Ronceverte Christian Church. Built of locally sourced oak, pine, and chestnut sourced from the St. Lawrence Lumber and Boom Company, it overlooks the Greenbrier Valley.

Visible from the church’s wide front porch is the Chestnut Street Bridge, constructed in 1915 to span the railroad and Monroe Street. Featuring brick approaches and a central span with a wooden deck, the crossing has been closed to any traffic for years because of structural deterioration.

I ended my visit to Ronceverte with a quick glimpse of the long-closed Grand Theater. It’s façade of white glazed brick and black vitrolite, an opaque pigmented glass, was unique. Constructed in 1937, the theater was designed by John Norman, Sr., the second registered black architect and seventh registered architect in the state. The interior has long collapsed and the only significance to the building is now just the exterior. Despite its condition, the Grand Theater is slated for rehabilitation into a community venue.

The fog and rain returned as I left Ronceverte heading north along Route 219, the Midland Trail, and finally Route 92. The narrow two-lane byway, hemmed in between Coles and Allegheny mountains, snaked its way along Howard and Fleming creeks without any sense of modernity or formality. My one and only stop was in the community of Alvon, all but deserted except for the remnants of a general store, post office, and fueling station. I snapped my last photograph before darkness finally enveloped my surroundings and continued north towards my next destination in Pittsburgh. 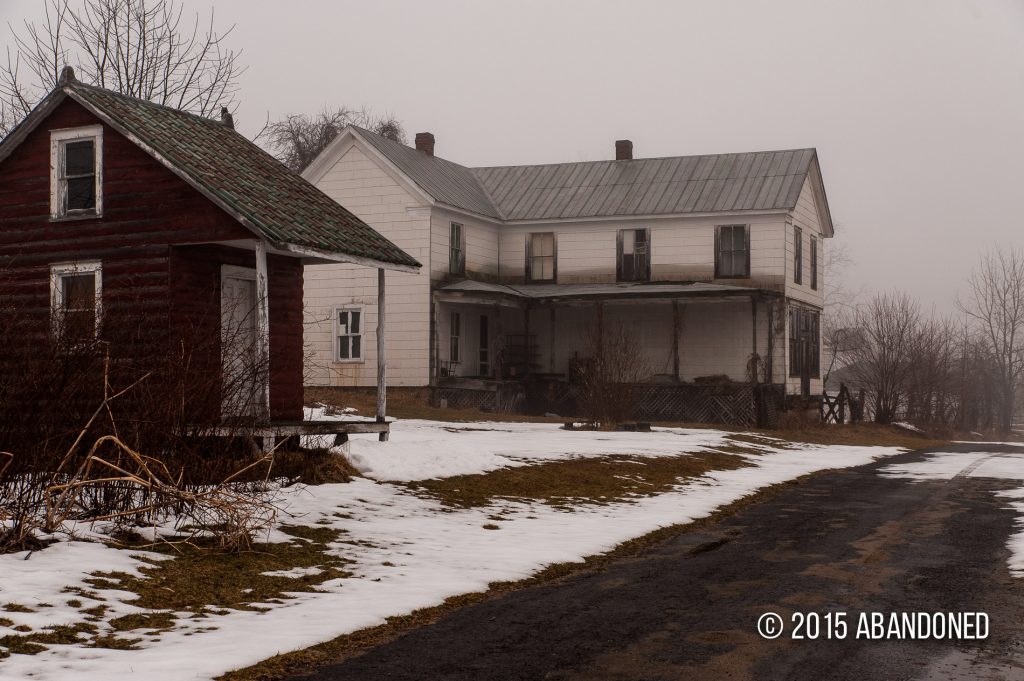